When talking manliness our thoughts invariably wander to Clint Eastwood. He has been a paragon of Hollywood masculinity since well before I was born and has aged into a codgery reminder of bygone values of self-reliance and grim determination. What some of you might not know is that he has a son (one of several children with…several women), who wants to be a leading man, just like his father. 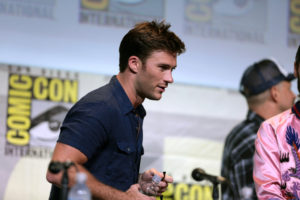 Scott Eastwood has decidedly hitched his wagon to his father’s rugged good looks and manly charms. In 2013 he did a photo shoot for Town & Country, which had him perfectly coiffed and done up maximally preppy on a yacht off the coast of Newport, CA, channeling the very model of Ivy League elitism paired with the text

People assumed that I would have everything handed to me, but that couldn’t be further from the truth. I was on my own just doing the grind.

One wonders how true that is, considering one of his earliest credited roles was Gran Torino and profiles frequently (if not universally) refer to him as Clint Eastwood’s son. Since 2013 there has been a concerted effort to make Scott Eastwood happen. Movie and TV roles, modeling gigs, an Instagram account that gets linked by gossip rags whenever he shows up shirtless, and codgery co-interviews with Clint discussing the pussy generation (a fun brouhaha to read about), but while he inherited many of his father’s features, it remains to be seen if he can pull off his father’s gravitas or effortless machismo.

To quote The Streets “Yeah yeah like I said you are really fit/But my gosh don’t you just know it.” Regardless, he’s handsome, a bit of a ham in a way that walks a fine line between adorably goofy and overly packaged, and I’d undeniably hit it like the fist of an angry god if I had the opportunity.

Thank you Sydney paparazzi for trying to capture my playful side, but instead making me look like a total creep. Can't a guy have an innocent splash fight in peace? At least let me put my tongue away next time. #creep #30s #oldguyshit #loveit

In case you wanted to learn. Full article.

What a day.  And its just the first day of the work week for most of us.  But rather than…