Mack Beggs, a female transitioning to be a male by using massive amounts of steroids completed an undefeated season Saturday by winning a controversial Texas state girls wrestling title in an event clouded by criticism from those who believe the testosterone he’s taking as he transitions from female to male created an unfair advantage.

Beggs, who reached the state tournament after two opponents forfeited, was dogged throughout the tournament by questions about whether his testosterone treatments made him too strong to wrestle fairly against girls.

The University Interscholastic League, which oversees athletics in Texas public schools, enacted the birth certificate policy Aug. 1, 2016. And while Beggs’ family has said he wanted to compete against boys, UIL deputy director Jamey Harrison, who refused to address Beggs directly, said the UIL had not received a request to change divisions from any athlete at this competition. 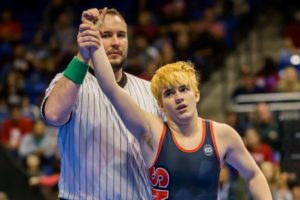 In a twist of irony, The above story was reported on the ESPN W outlet rather than the main site.  ESPN W, which ostensibly caters to women, does not have commenting in its articles.  ESPN’s main site permits it. To my recollection, it’s the first article about an athlete referred to as male throughout to appear on the “W” site.  I’m sure its a coincidence

Meanwhile, the Washington Post article had commenting on and the responses largely derided Beggs being able to compete against athletes who are banned from taking the same performance-enhancing drugs Beggs is mega-dosing on in order to deliberately change body structure.

USAToday had the comments turned off for their story, which said there were “a smattering of boos”  amid mostly cheers.  Which is a departure from the WaPo pice which hilariously led with the words “booed and bloody”.  Now perhaps Kent Babb had some insight into Beggs’s monthlies (if he’s still having them while taking mega-dowses of male hormones, I don’t know) that gives him license to use “bloody” in a description of someone that looks like they barely broke a sweat while competing against a series of opponents that are physically inferior to him in every way. Perhaps his editor added it in for color. And perhaps Babb is just full of it.  Either way, no blood was visible and there were more cheers than boos.

But WaPo and other outlets have gotta fight for Team Trans rather than report honestly.  After all, if just the fact were reported here: “a person taking doses of steroids that nobody else in a competition designed for females is able to take under the rules, wins the competition without breaking much of a sweat”, I’d imagine the reactions would be quite consistent.

Of course, the self-proclaimed “worldwide leader in sports” doesn’t want your reaction to be heard anyway.

BONUS CONTENT: These people say their seven year old is trans and would change Trump’s mind on access to trans bathrooms.  Seven.  Their kid is seven. And this fostering of a delusion so they can get street cred with their idiot progressive friends is child abuse.