Trump Wiretapping May Actually be a Thing…and it Looks Nasty! 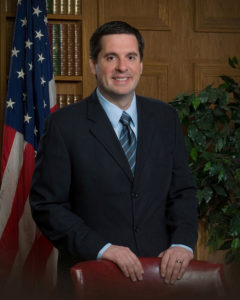 By Trump Lotto of The Unforgiving Shadow

The Trump wiretapping scandal is back with a vengeance and you’ll want to pay close attention this time! Chairman of the House Intelligence Committee, Devin Nunes, came forward with new information involving surveillance of Trump transition team members. Nunes claims communications of Trump’s team were captured on multiple occasions, incidental to collection on foreign targets. Nunes further claims these intel reports include details about transition team members that offer “little to no foreign intelligence value.” The intelligence reports were widely disseminated in the intelligence community, and the identities of US citizens exposed during collection, were left unmasked. Finally, Nunes said none of the surveillance was related to Russia or investigations into ties between Russia and team Trump, an obvious but futile attempt to head off more Russian conspiracy theories.

My fellow Glibertarians, if this is indeed true, the significance is staggering! If you are not familiar with SIGINT collection operations you probably don’t fully appreciate what the implication is here. When signals intelligence incidentally collects information on a US citizen, it is a huge deal! The collectors must take steps to mask the identity of the US person, destroy or at least restrict any information gained from or about the US person that has little to no foreign intelligence value, and attempt to limit future collection on the US person. If Nunes is right, this didn’t happen. Whoever disseminated these intel reports never masked the Trump transition team members, included details with no relevant intelligence value, and then disseminated this information. This does not happen accidentally! I’ve seen people lose their access for far, far less.

It’s time now to put on the speculation hat and try to crack this thing wide open: If I’m President Obama and I want to dig up dirt on Trump, directly spying on him would never fly. I need a method that at least offers plausible deniability. So, I do some research and find some foreign friends of the Trump transition team; foreign persons that Trump team members have regular contact with. Next, I get a trusted intel staffer to cook up some BS accusations about these foreign targets being involved in a conspiracy or terrorism. I get my intel subordinates to present this to the FISA court, and you’re approved for surveillance! It’s easier than buying a toaster.

Next, an appropriate agency begins collection and whoops, since these foreign targets have regular contact with Trump transition team members, we just happen to incidentally collect information on them, too, but we totally weren’t intending to do that….wink, wink. This is where things fall apart for plausible deniability: If the rules are followed, the identities are masked, information is withheld, and the rest of the intel community will have no idea who the US persons were in those intelligence reports. Of course, if the rules are followed, that destroys any attempt to get dirt on Trump. So somewhere along the line, someone high up in the intel chain-of-command (most likely a director/agency head) made the call that these US citizens would remain identified in the disseminated intel reports. This was not a low-level decision!

Trump Has a Serious Intel Problem

Trump may be a master of media manipulation, but I don’t know if he fully appreciates the situation he’s in. Signals intelligence dudes illegally and improperly collected and disseminated information on his team and maybe even him. This information was probably seen by hundreds of analysts and the heads of every major US intel organization. Why the hell didn’t anyone come to Congress sooner? Sure, this looks bad for Obama, who is the probable mastermind, but it appears that a large portion of the intel community has been silent on this.

A sitting President has an intelligence powerhouse with vast surveillance powers and no qualms about blatantly illegal and unethical surveillance on the President’s own team! Trump needs to clean house and do it fast or this could get ugly. Trump’s relationship with the intel community has already been frosty, but he may have a fair number of entrenched and powerful enemies willing to go to war if it means taking him down.

This revelation also comes on the heels of FBI Director James Comey’s congressional testimony that he has “no information” to support Trump’s wiretap claims. It strains credulity if we are to believe Comey never saw these intel reports. Perhaps Comey is merely playing semantic games here, ignoring this incidental surveillance because it isn’t physical wiretapping. Either way, it doesn’t look good for Comey, and it is high time Trump gave him the ax.

This is the level of commentary you can only expect here in Glibertaria. Meanwhile, CNN’s coverage on this revolves around Nunes apologizing for not notifying Democrats of the intel before his press conference: Nunes only notified Republicans prior to the conference. Now I agree that Nunes should have briefed his Democrat committee members, but this is slow news day coverage at best. On the other hand, evidence that the former President used his powers to spy on an opposition candidate, that’s huge! But at this point, any of us could have called the news coverage a mile away.

Still, I think it’s interesting to discuss the liberal media playbook. If this is substantiated, it’s big and very bad. In the short term, they’ll continue to ignore it or downplay it like they’ve been doing. Once more details are provided, they’ll have to cover it, but I suspect the Clinton email plays will be marched back out to paint this as another unsubstantiated right-wing conspiracy theory. And with tremendous irony, they’ll fire back with their own conspiracy theories. Even if there isn’t a Russian within a light-year of this thing, liberal outlets will be wildly throwing around accusations that this is proof of a Russian conspiracy. The collection efforts were exposing those connections, contrary to Nunes’ comments, and now Republicans are trying to cover it up!

There’s one more important takeaway here: If the intelligence community willingly participated in a scheme to spy on a US Presidential candidate, what’s to stop them from doing far worse to your average US citizen? They had to realize if this got out it could be very bad for them. On the flipside, abusing your power to target a lowly US peasant, that’s easy to hide. It’s time to be paranoid folks…. very, very paranoid.

It is sort of dreary and blah around here, and work is a grind. What cures that? MOAR fluff links.…

Welcome once more to my magnificent nightmare. I will devote this installment to the prog's views on science and the…