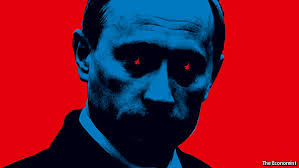 It’s really amusing watching the MSM twist their panties in a wad trying to connect Trump to Russia. They’ve gotten the smallest amount of traction and the chants for Trump’s head have started. Besides the fact that the original Trump to Russia connection is based on innuendo and suggestion, the witch hunt has broadened out into a general search for any connection between Trump and the entire nation of Russia. Like a brain damaged chihuahua, the media chants “Russia! Russia! Russia!” hoping beyond hope that they will scare the GOP and Trump into submission. “We can finally control the renegade!” they think, as they piss away the last of their credibility.

Although people joke about “alternative facts,” it’s not a joke. There are two prevailing agendas across the country: 1) Trump is LITERALLY HITLER and A RUSSIAN MOLE AT THE SAME TIME!!! 2) Trump is DADDY and GOD-KING OF KEKISTAN, VANQUISHER OF THE SJWs and CUCKS!!! The left has their educational and media empire churning out outrage by the gallon. The right has their independent media matching the outrage of the left.

Antifa is smashing windows and folks like Based Stickman (who the fuck is Based Stickman and why is he called that??) are bashing Antifa heads in. People are primed to believe that the violence will do nothing but escalate.

I tend to be quite skeptical of claims that the next civil war is about to start. Like the Rapture, many people have predicted a civil war, only to be laughably wrong.

However, let’s travel through another dimension, a dimension not only of sight and sound but of derp. A journey into a scandalous land whose boundaries are that of imagination. That’s the signpost up ahead – your next stop, the Derplight Zone! This is Donald. Donald is a normal man, somewhat spoiled, somewhat outspoken. Donald has been a real estate mogul for the last few decades, accumulating a vast amount of wealth and notoriety. Recently, Donald was chosen to be the sacrificial lamb of the GOP to allow Hillary Clinton to ascend to her rightful place as The First Female President of the United States. However, something went wrong. Horribly wrong. Donald had an energy that transfixed the public, and nobody could explain it. Donald became President.

Okay, I can’t keep the Twilight Zone schtick up, but let’s continue to investigate why this latest push to impeach could lead to a civil war. There is one big reason why: Trump’s election was an unexpected boon to a class of people that have felt trod over by the political elites for decades. People most fiercely defend unexpected gains, especially when it is threatened by their enemy. The Alt-Right has ascended and has labeled Trump as their knight in shining armor, here to wipe out the scourge of establishment politics and social justice. The Fascist Left has also ascended, using Hitlerian tactics while decrying Trump as literally Hitler. While an escalation of rhetoric isn’t a sure sign of war, it is a prerequisite.

The desperation seen on both sides is significantly more concerning. Antifa Nazis have normalized mob violence and intimidation as protest tactics, and Alt-Righters have responded in kind. This powder keg is gonna blow at some point, and we’re gonna get another Kent State. The question then becomes what happens in response to the deaths of 5 or 10 rioters (of either side). Everything in my mind and heart tells me that a crisis like that would boil up for a few weeks and slowly subside. However, what if it didn’t? What if it boiled up into a tempest?

I think it’s unlikely but possible that this could happen. Either Antifa is gonna beat some people to death, or the Alt-Righters are going to start shooting when Antifa gets violent in the wrong town. This could escalate to people seeking out the melee to contribute, which could escalate to large-scale violence between groups of people. . . also known as a battle. From there, things could snowball into nationwide insurrection.

Obviously, I find this quite improbable, but the increasing violence and radical rhetoric inspire some unlikely thoughts.