Jesus and The Gini Coefficients

“Again, it will be like a man going on a journey, who called his servants and entrusted his wealth to them. To one he gave five bags of gold, to another two bags, and to another one bag, each according to his ability. [Wealth Gini Coefficent=.333] Then he went on his journey. The man who had received five bags of gold went at once and put his money to work and gained five bags more. So also, the one with two bags of gold gained two more. But the man who had received one bag went off, dug a hole in the ground and hid his master’s money.

“After a long time the master of those servants returned and settled accounts with them. The man who had received five bags of gold brought the other five. ‘Master,’ he said, ‘you entrusted me with five bags of gold. See, I have gained five more.’

“His master replied, ‘Well done, good and faithful servant! You have been faithful with a few things; I will put you in charge of many things. Come and share your master’s happiness!’

“His master replied, ‘Well done, good and faithful servant! You have been faithful with a few things; I will put you in charge of many things. Come and share your master’s happiness!’

“Then the man who had received one bag of gold came. ‘Master,’ he said, ‘I knew that you are a hard man, harvesting where you have not sown and gathering where you have not scattered seed. So I was afraid and went out and hid your gold in the ground. See, here is what belongs to you.’ [Wealth Gini Coefficent=.400]

“His master replied, ‘You wicked, lazy servant! So you knew that I harvest where I have not sown and gather where I have not scattered seed? Well then, you should have put my money on deposit with the bankers, so that when I returned I would have received it back with interest.

“‘So take the bag of gold from him and give it to the one who has ten bags. [Wealth Gini Coefficent=.489] For whoever has will be given more, and they will have an abundance. Whoever does not have, even what they have will be taken from them. And throw that worthless servant outside, into the darkness, where there will be weeping and gnashing of teeth.’ — Matthew 25:14-30, New International Version, bolding and bracketed comments blasphemously added by robc 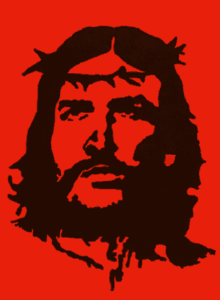 Jesus seems to go against Marx from the beginning, as the rich man gives his servants money to take care of according to their abilities. The inequalities start then, but are relatively low at a Gini Coefficient (GC) of .333. Due to the men’s work investing the money, the GC increases to .400 by the time the wealthy man returns from his journey. And when the one man fails to invest properly, the GC is increased by taking his gold away. And not only is it then given to someone wealthier, but to the wealthiest of the servants, increasing the GC up to .489.

And people say that Jesus was a communist?

Happy Friday. Hopefully work is over. [caption id="attachment_8926" align="alignleft" width="150"] Legal![/caption] Congratulations to Texans, who can once again legally carry…