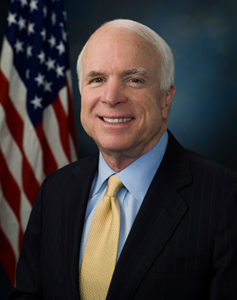 US Senator John McCain (R, AZ) was just operated on for glioblastoma, an aggressive brain cancer. He has a roughly even chance of surviving for another year, three-year survival rate is in the single digits. Should McCain die in office or resign, his replacement will be appointed by the Governor of Arizona. One unique feature of Arizona law is that the governor must appoint a senator of the same political party as the senator being replaced. This appointment will last until a special election in 2018.

Current Arizona Governor Doug Ducey is a Republican whose term runs through 2018 and is eligible for re-election to a second four-year term that year. So it seems likely that Ducey will have to appoint a replacement for McCain. Ducey, a businessman prior to his political career, is no libertarian but does have some liberty-friendly positions on shrinking government and school vouchers.

Arizona is a mostly red state with some libertarian tendencies. Arizona legalized medical marijuana in 2010, but in 2016 rejected Proposition 205, Arizona Marijuana Legalization Initiative, by 2.64 percent. Arizona has some of the most gun-friendly laws in the nation. Arizona voters also elected Sheriff Joe Arpaio repeatedly.

McCain’s was last elected in 2016 and his term runs through 2022. The best outcome for libertarians is that Gov. Ducey will appoint a young, liberty-friendly senator to replace McCain. Given McCain’s prognosis, his replacement would have a good three to four years of tenure before seeking election. Such a senator would lack McCain’s baggage and track record, and could establish a name for himself or herself before standing for election in Nov, 2022.

When discussing terms of office I’m using the last full year of the term of office and discounting the few days of the following year when the term actually ends. Sources Consulted: US Senate website, Wikipedia, Ballotpedia, NRA-ILA.

The Hat and The Hair: Episode 53