It’s been awhile, and life is changing considerably. Last I wrote was regarding living in a self-sufficient manner on a bit of acreage. Since then, my mom came closer than pretty much ever to meeting eternity (septic shock, recurring cdiff infections, congestive heart failure, and other stuff, all at once). As in was down to 68 lbs (though she is technically a homunculus at 4’9″). We took the first half of her inheritance from her aunt passing, got all of the debt except the mortgage paid off, and figuring this was probably the last time for it, splurged on a summer for myself, my sister, and my nieces to remember while mom is still mobile and, well, alive. I am also moving back to Austin, TX, at the end of this month. The fiancee is graduating in some kind of bio-chem/genetics voodoo Frankensteinian field. The second half of the inheritance goes to fixing both houses so that we can sell them, so my sister can buy a house outright in town, or wherever she wants to.

We rented a beach house for 3 weeks on Tops’l Island (the property we own is just south of Pinehurst, NC, and borders the SW corner of Ft Bragg, so that is our favorite beach to visit) for an obscene amount of money (worth it). We also spent a REALLY obscene amount of money on 5 tickets for the Waters show, as we are all huge Pink Floyd freaks.

Waters is very hit and miss in the post-Floyd days (1985 in ATX on the Pros and Cons Of Hitchhiking tour, the guitarist was not able to do either Gilmour or Clapton, it was out of place for the music), so I researched on YouTube his shows from recent years. I went back to the last stages of the recent Wall tour, and the early shows from this one. He sounded good, the show looked good (as opposed to a few years ago; see the embarrassing performance on YT with Eric Clapton, ’05 or ’06), the production looked like old Floyd Wall-era goodness. I pulled the trigger at $200/ticket. This was the 12-y/o and 8 y/o nieces’ first concert. We were 2/3 of the way back on the first row of arena seats, and I could see directly into the front of house sound/light console area. This being my main focus after the TBI residuals from Iraq finally killed off 30+ years of second-nature guitar playing, which is now like trying to learn Chinese for me.

We got to the show fully aware that we were in a very liberal college town at the center of the BS transgender bathroom wars, and that Waters is pretty much a far left, racist, authoritarian ass. He did a full 3 hour show, with a 15 minute intermission and only 3 songs from his solo album, so about 2.5 hours of Pink Floyd stuff. 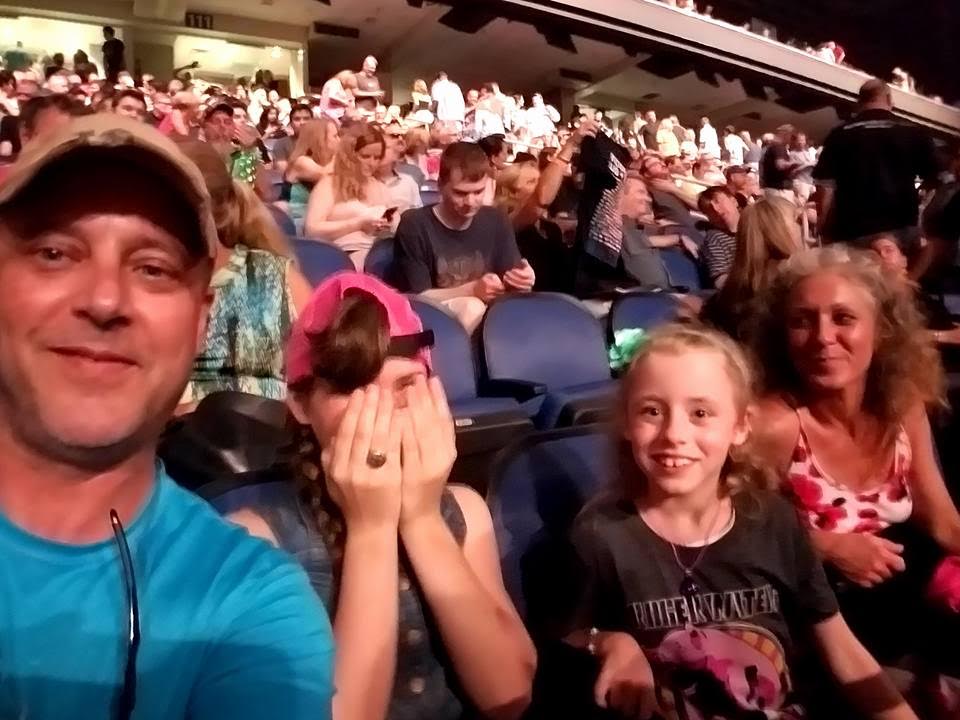 Me, the minions, and my sister at intermission…

Light show was top notch, merging in digital effects in camera from the digital video cameras around the stadium with the projected animations from Gerald Scarfe going back all the way to the Dark Side of the Moon tours. The updated pig from the ’77 Animals tour flew around. New footage for Dogs and Sheep of Battersea with a whole mess of pro-Palestinian, pro-BLM, anti-Trump footage projected in for the appropriate songs…

As a side note, though there was the predictable frothing cheering from the proggie contingent on his strangely out-of-place proggie excursions, there was the almost audible sound of eyeballs rolling back into heads during those parts. A lot of it.

I got into conversations with people several rows around me, including the libertarian-ish thread of what exactly his message was. I didn’t even start it. What exactly was his message, when he’s calling out Trump but not Clinton, Obama, et al? How are you going to crack on capitalism while charging $200 per ticket anywhere below nosebleed, and starting at $40 for a t-shirt? The phrase transparent hypocrisy was used more than once.

He even brought out local black kids (wearing orange GITMO jumpsuits) to dance (which they then ripped off for the solo to reveal RESIST! shirts), and then lip-sync the second verse of Another Brick In The Wall Pt 2. There was very much a Victorian “White Man’s Burden” feel to that whole bit (Oh look at the noble savages) that came off as pretty damned awkward. 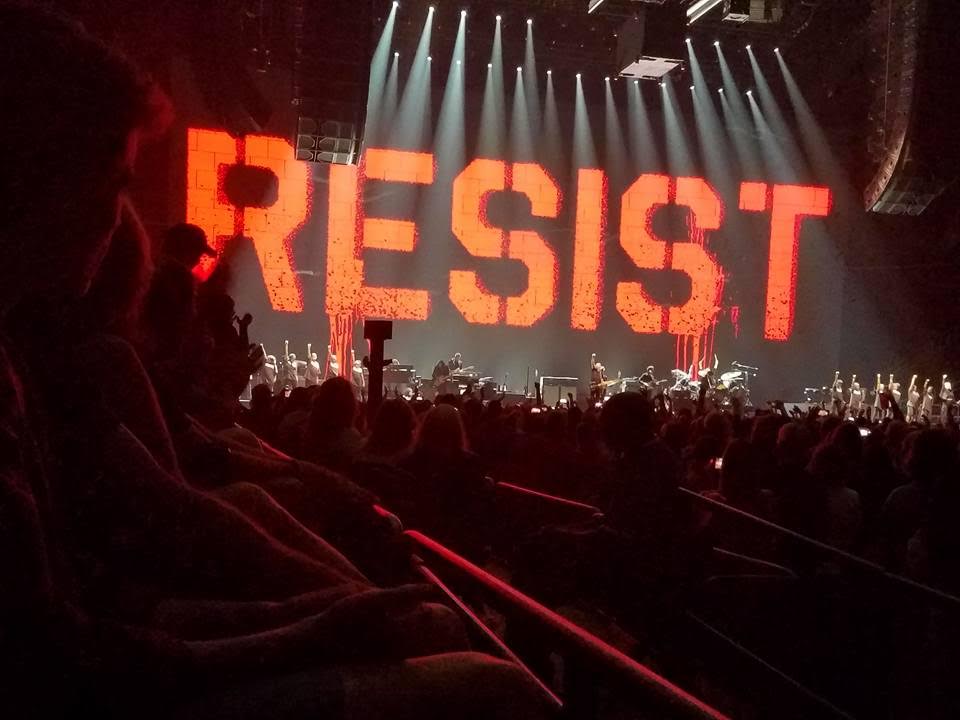 So, enough of that. Musically, it was as good as any show I have ever seen. Rush, The Firm, Van Halen in ”79, the first show I saw him in (in his prime), this was as good if not better. He finally got a guitarist who did credit to Gilmour, the backup singers killed it on all of their parts and did great service to Claire Torry’s vocals on DSOTM for The Great Gig In The Sky. His backup guitarist handled Gilmour’s lead vocals, different and a bit less strong than DG, but it really worked well. Waters’ voice was in better shape than the Animals tour in ’77. He seemed “trained not to spit on a fan,” unlike one show on that tour. The energy was fantastic, and most of the audience was my age to mom’s generation (Boomers) and there for the Floyd show. 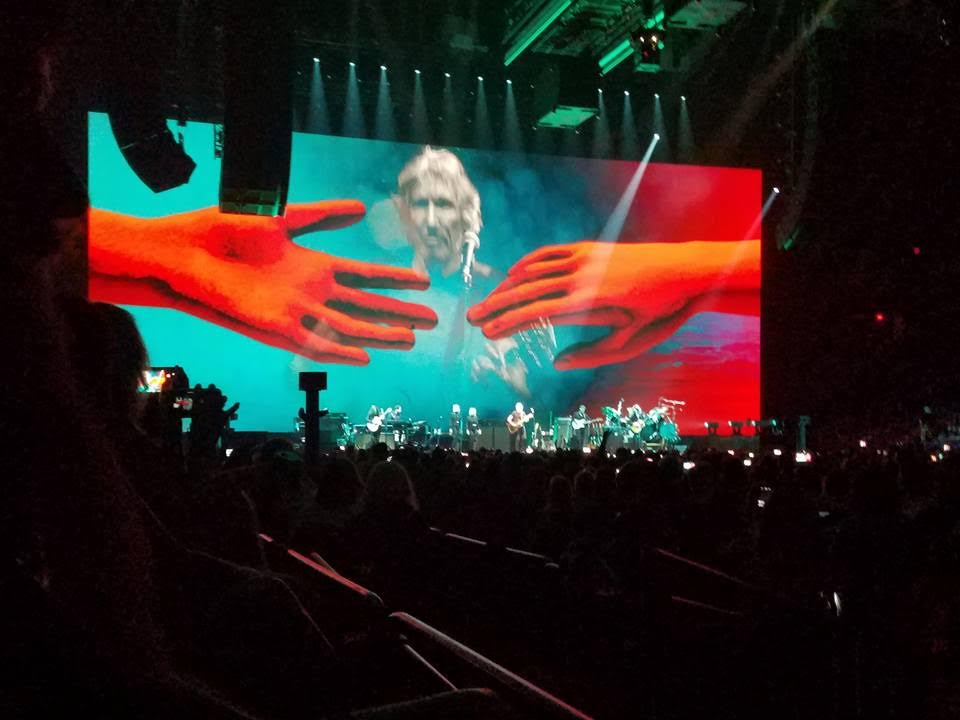 The light show was completely Pink Floyd from their Animals/Wall heyday, and then some. He had a metallic sphere drone (helium-filled?) that was covered in GoPro cameras, which tooled around trough the show. I surveilled it back of course. The pyramid of lasers with the rainbow of lasers was perfect for Eclipse/Brain Damage, and Comfortably Numb was VERY well done as the finale.*

The proggie political stuff was expected and annoying, but in no way diminished one of if not the best show I’ve been to.

*I still want to see Gilmour though, as it is his fault that I started playing guitar, and now have a self-custom built FrankenStrat and pedalboard with boutique and self-built EFX pedals covering the Meddle through Final Cut periods, and why I went into seriously studying sound/recording engineering once the brain/eye/hand communications issues got bad. 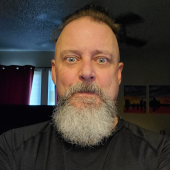 Will always be Airborne Infantry, but hell. I'm old and enjoy the beach bum part much more now, as well as making effects pedal clones/tweaks, the occasional electric guitar or bass, building and shooting guns and the tinkering that goes with it. The wife is trained in the Cellular Sciences and other arcane Majicks.

Uber driver gets complaint after multitasking. I wonder if Uber's TOS for drivers prevent him from offering rides for other…

I'm not a morning person by any stretch of the imagination. I'm serving up links, but don't think you'll get…