Who are the protectionists?

Shortly after President Trump’s election there were commentators who bemoaned the effect that the new president would have on free trade. And there were reasons for concern. One of the first acts of the administration was to end the Trans Pacific Partnership- a long negotiated free trade pact. This was followed in short order by the administration threatening economic consequences to businesses outsourcing their operations. The president also took to Twitter attacking China as a currency manipulator and reiterated his desire to ‘re-negotiate’ NAFTA. The president also surrounded himself with noted trade protectionists, such as Daniel DiMicco, who is currently a trade representative in the administration. Through his words and actions, President Trump has shown that he is no fan of free trade.

But the same people who once worried about a revival of high tariffs and onerous sanctions on trade partners are now some of the most vocal proponents of more trade restrictions. To be sure, they are advocating that trade restrictions only be imposed on the right ‘bad guy’ (Iran, North Korea, and particularly Russia) with a bipartisan bill quickly moving through Congress. The bill is unique, in the fact that Congress, which has historically ceded trade authority to the executive branch, has imposed a caveat in this legislation that would prevent the president from unilaterally lifting the trade sanctions. Certainly, the fair weather free traders that support ‘sanctions for me and not for thee’ assert that these three countries pose a unique military threat to the United States and its allies. North Korea is an erratic dictatorship that possesses nuclear weapons; Iran is getting closer to developing its own nuclear weapons (so we’re told); and Russia continues to occupy parts of Ukraine, along with having ‘interfered’ in the most recent presidential election. Respectable society has decided that free trade is important, but not with those who pose an existential threat to our nation.

Ignoring the question of whether or not these three ‘bad guys’ actually pose a threat to the United States, it’s glaringly obvious that the justification for these economic sanctions, coupled with opposition to others, is rooted in pure hypocrisy. These same ‘free traders’ were just recently lecturing the administration that we should not retreat from opening trade with Cuba, even though that country remains a despotic hell-hole and props up the man-made disaster that is Venezuela by providing arms and personnel. These were the same people that were alarmed every time President Trump talked about penalizing China for currency manipulation and supporting the Kim regime in North Korea. If North Korea poses a unique military threat to the United States, then why are we imposing more meaningless sanctions on that state, while ignoring its Chinese benefactor?

The response regarding China and Cuba from these selective ‘free traders’ is always the same: engagement is more successful than isolation. Then why doesn’t that philosophy apply to North Korea, Iran, and Russia? It’s clear that neither President Trump, nor his detractors, are particularly keen on actual ‘free trade’. Each one wants to trade with some, while excluding others. The only difference is in who they don’t want to trade with and why. The president, as if ignorant of David Ricardo, wants to restrict trade with countries that enjoy trade surpluses with the United States, while his opponents want to restrict trade with countries identified as the ‘baddies’ by The Weekly Standard. Even those who have whittled the notion of ‘libertarianism’ down to nothing more than ‘free trade and free migration’ seem to be embracing The Weekly Standard mentality. So, since it is obvious to any casual observer that we are all trade protectionists now, can we stop pretending as if the president is the only one that threatens liberal trade? 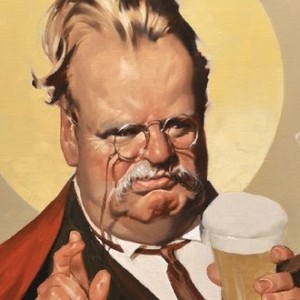 STEVE SMITH DO SATURDAY LINKS AND GIVE BIG FUNNY HEAD TIME OFF. LINKS ARE SHORT, SO STEVE SMITH CAN GET…

I'm just returned from a sojourn to Indiana. I would count it as a successful trip in that when I…