You may have read about the City of Chicago’s financial difficulties. More often than not, the news coverage on this issue often looks for a single cause of the problem, such as pension underfunding or the fact that Democrats are uniquely bad at math. This commentary is too simplistic and overlooks the fact that major cities are complex. Yes, Chicago’s pension system is woefully underfunded, but this doesn’t explain the City’s consistent budget deficits (pensions are long-term liabilities and current costs are relatively small in comparison to other expenditures). Yes, Democrats are astonishingly bad at understanding arithmetic, but this wasn’t always true about ‘Chicago Democrats’ (RIP) who, unlike their Midwestern peers (St. Louis, Cleveland, Milwaukee, etc.), cobbled together strong financial performance during the 1970’s and 1980’s while manufacturing jobs and population declined precipitously in the City.

I have provided a very brief summary of the issues contributing to the City’s poor financial position, along with providing an overview of the financial difficulty faced by Chicago Public Schools (which is a separate government from the City of Chicago).

For over ten years, the City has maintained a budgetary imbalance. Though these deficits have declined over the past four years, they are still expected to continue for the foreseeable future.

The City has also issued debt to close its budget gaps over a period of several years. This has resulted in an $8.3 billion debt load for the City ($3,080 per resident), which represents a 75% increase in debt between 2005 and 2014. The use of debt to correct these budget imbalances has also increased the City’s fixed costs. For fiscal year 2016 nearly a quarter of all revenue will be used for the payment of debt service. Most local governments with healthy finances dedicate no more than 10% of revenue toward the payment of debt. Historically to manage this large debt load, the City has often employed financial gimmicks such as ‘scoop and toss’, whereby new debt is issued with a longer maturity to repay existing debt outstanding. For the 2016 fiscal year the City has avoided employing this tactic.

To rectify this situation, the City enacted modest pension reform to reduce the annual contribution and slightly reduce the long-term liability for only the MEF and LF pension systems. This reform legislation was eventually ruled to be unconstitutional by the Illinois Supreme Court.

The City’s school system, Chicago Public Schools (CPS), is also financially weak. At the end of fiscal year 2015, CPS had operating reserves representing roughly 7% of total revenue and liquidity representing roughly ten days cash-on-hand. In general a school district is considered to be financially healthy if it holds no less than 10% of its revenues in reserve and liquidity is at least fifty days cash-on-hand.

Additionally, CPS faces challenging demographic issues similar to those that face the city (below). Enrollment at CPS schools has dropped roughly 5% between 2000 and 2010. Further, the percentage of school-aged children in the City (ages 0-19) has declined 17% between 2000 and 2010 suggesting that enrollment is unlikely to grow in the future. In 2016, CPS reported a decline of 3.5% from the previous year. In spite of these enrollment declines, CPS’ total expenditures increased 10% between 2010 and 2015.

Many of the rising costs that CPS faces are connected to labor contracts that limit classroom sizes and mandate costly employee healthcare and retirement benefits. These labor contracts exert the most pressure on CPS underfunded pension system. In fiscal year 2016, CPS will have to make a $676 million pension contribution which will consume 10% of its total budget. This cost will continue to rise as CPS is under a state mandate to achieve 90% funding in its pension system (which is currently only 58% funded) by 2058. 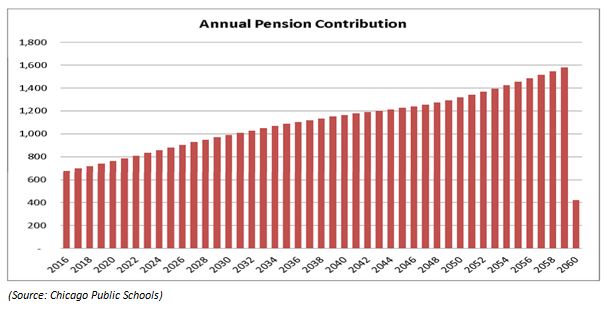 To a large extent, the underfunding of the pension system has been due to CPS failing to make its annual contribution payments in recent years. As recently as 2001, CPS’ pension system was more than 100% funded.

CPS faces labor unrest due to the school district seeking concessions from its teachers’ labor union. Points of contention primarily center on pay increases, health insurance benefits, and teacher pension contributions. Currently, teachers only contribute 2% of their salary in pension contributions while CPS would like to increase that amount to 9% of a teacher’s salary. The teachers’ union went on strike in 2012 over these concession demands.

Currently the City’s unemployment rate is higher than both the State average and the national average. Additionally the City has experienced declining population for five of the past six decades. Between 2000 and 2010, the City’s population declined by 6.9%. Estimates since the 2010 Census indicate that the City is experiencing one of the largest population declines of the twenty-five largest cities in the country. A high unemployment rate and declining population will further constrain the City’s financial health as it loses taxpayers.