A short background and observations on the current Afghanistan situation, as it involves Pakistan & India.

The nations of Afghanistan and Pakistan are not friends. The Afghans have been fuming about getting split up by the British (see this article for some background on the “Durand Line”) 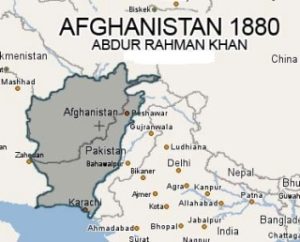 Pakistan’s intel service, the ISI (a real “Deep State” if there is one to be used as an example) pretty much used/uses the Taliban, and the horrible Haqqani organization as a tool to keep Afghanistan either in turmoil, or a client state. Either way, in no position to revisit the map. Needless to say, the Afghans have been a wee bit miffed about this. The latest growling from Kabul is an example of this.

So what does India have to do with this?

But with foreign military support lessening, Afghanistan is not in a position to do much more than grumble. But they do have one sure way to get the Pakistani goat, so to speak. Seek support from India. “Gosh, Pakistan…I know you guys are mortal enemies, but there really isn’t any threat in us having closer ties with India!” Or, as their Ambassador to India delicately put it:

“Kabul would never allow anyone to use its soil against others. We are an independent country and we hope Pakistan would see Afghanistan as such.”

India (along with Iran) was a refuge for many during the Northern Alliance vs Taliban throwdown. It still was the medical tourism destination for those with the means to get there when I was in country, 2004-2005.

India benefits from this Afghan flirtation in a couple of ways. First, they get to tweak Pakistan a bit, and send a bit of a message – “Hey, you know that Kashmir thing you guys are always banging on about? How would you like a problem like that on your ‘Pashtunistan’ border?” Second, they have a potential market and trading partner. Any libertarian worth their monocle chain would be glad of reason #2, if not so much #1. As a side note, one of the developments that would help this Afghan-Indian trade involves a little work in Iran. Better than shipping the IRGC pallets of cash and propping up their nuclear weapons program.

I am keen to see the reactions of India and Pakistan to the inevitable wrap up of direct US military involvement in Afghanistan. As for Pakistan, I fear the ISI will say “see, we are winning – Taliban harder!” As for India, I hope they continue to step up trade and support of Afghanistan.

I would welcome your observations, relevant links and thoughts in the comments.

Its Monday again. I have been indifferently productive, which is like a major victory for me. I guess there was…