My entry for dumbest hot take on the Las Vegas shooting:

Man-made mass casualty incidents seem increasingly common. But are medical teams actually learning enough from them? Are we really getting any better? The answers are unclear because in the United States since 1996, there has been an effective ban on federally funded research on firearm injuries. At that time, pro-gun members of Congress actually tried to eliminate the National Center for Injury Prevention and Control at the Centers for Disease Control and Prevention simply because it was funding research on gun injuries. The members instead succeeded at removing $2.6 million from the House’s CDC budget—the exact amount of money allocated to firearm injury research. (The money was later reallocated specifically for research on traumatic brain injury.) At the time, Congress’ language was difficult to interpret, but the result of that language has been clear as day: The CDC stopped funding gun injury research. The National Institutes of Health followed suit. Almost everyone in the research community now errs on the “safe side.” Research on the epidemiology of who, why, and how people die as a result of gun injuries in America has virtually vanished.

VANISHED! I mean, how does a bullet traveling at supersonic speeds even penetrate human skin? Why does blood come out of the hole? Which is the worst place to get shot? We just don’t know. Damn you, gun lobby! [shakes fist at sky] 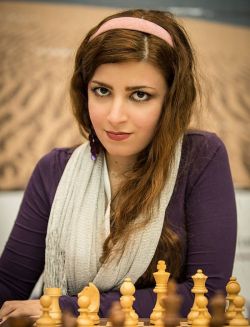 Chess player banned by Iran over hijab switches over to US

The semi-official ISNA reported that Dorsa Derakhshani refused to wear the headscarf, known as the hijab, during a February competition in Gibraltar, and joined the U.S. national team.

Since the 1979 Islamic Revolution, Iran has required women to wear the hijab in public places.

However, the semi-official Mehr news agency reported Monday that the president of Iran’s chess federation, Mehrdad Pahlevanzadeh, said that Dorsa had in fact changed her national federation to the United States, which was not unusual among chess players.

Her brother was also banned from playing for the Iranian team for the dread crime of agreeing to play chess against an Isreali. He caught them Jew cooties!

Not that she gave it much thought. Until, that is, her senior year of high school, when she saw a picture of a strikingly similar robe in an art history class.

The teacher told the class about how the robe was used in spiritual ceremonies, Sara Jacobsen said. “I started to wonder why we have it in our house when we’re not Native American.”

She said she asked her dad a few questions about this robe. Her dad, Bruce Jacobsen, called that an understatement.

“I got defensive at first, of course,” he said. “I was like, ‘C’mon, Sara! This is more of the political stuff you all say these days.'”

But Sara didn’t back down. “I feel like in our country there are so many things that white people have taken that are not theirs, and I didn’t want to continue that pattern in our family,” she said.

The robe had been a centerpiece in the Jacobsen home. Bruce Jacobsen bought it from a gallery in Pioneer Square in 1986, when he first moved to Seattle. He had wanted to find a piece of Native art to express his appreciation of the region.

Appreciating the art of different cultures is straight up bigotry.

Tori be say for di last 3 days, police for Egypt don arrest 22 people wey get anything to do with LGBT rights.

No word on if bottoms were also arrested in the sweep.