That is the headline from an article in the Yomiuri newspaper, December 14, 2017. Let’s yank it apart and see what it says and learn a little Japanese in the process.

[米] is the kanji (Chinese character) for “rice”. There are thousands and thousands of kanji and take years to learn, but we’ll focus only on the ones in the headline. [米] is pronounced kome when it appears as a solo kanji and bei when it appears in combination with another kanji. In our headline it is in tandem with [軍] , so it’s pronounced bei in this case. Another use of [米] is in the kanji set [米国], or beikoku, which means “America”. It’s actually a shortened form of the original name for “America” which is [亜米利加], or Amerika. Today, [米] is often used to indicate that something is American as in [米大統領] or “American president”.

Unfortunately, they had to use kanji to produce the phonetic sounds of words because the heathens wouldn’t use the ABC’s. For example, if you pile up the train wreck of nonsensical kanji [府亜区御府酢零馬] you come up with a reading of, “Fuck off, Slaver”. Sometimes for fun I’ll write, [味噌歩荷] on a piece of paper and have a young lady read it aloud. “Mi so ho nee? I no understand.”

[軍] is pronounced the same as the English word “goon” (written as gun) and means “army”. So when we put [米] and [軍] together we get beigun or “rice army” or “rice goon” or, more accurately, “American Military”. 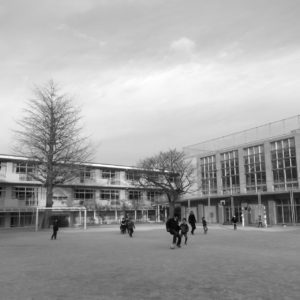 [ヘリ] is written in katakana. Katakana is a system of 46 simple characters that is used for transcriptions of foreign words, loan words etc. [へ] is read as he (which is pronounced like “head” without the “d” sound) and [リ] is ri as in “reeeeeeeee”. [ヘリ] gives us heri which is the shortened form of [ヘリ コプター] or herikoputaa. Helicopter. For example, [ピノチェトのヘリコプター欲しい！] which means, “I want Pinochet’s helicopter!”

[の] is no, and don’t you forget it. This is from the final system of writing called hiragana. Same number of characters as katakana, 46, and, as with katakana, can produce all the sounds you need in Japanese. Hiragana is basically the glue that holds a sentence together as it’s used for verb endings, prepositions and so on. [の] functions the same as the possessive “s”. [米軍ヘリの …] means, “American military helicopter’s…”

And there we have it, “American Military Helicopter’s Window Falls on Schoolyard”. This happened in Okinawa and similar incidents have happened over the years. Fortunately, none of the elementary school’s students were injured, but if a fatal incident were to occur due to U.S. military actions, you’d probably hear cries of, “Get these rice goons out of our schoolyard!”

Afternoon Out of Office Links

[caption id="attachment_18653" align="aligncenter" width="636"] Most of Swiss Servator's in-box...[/caption] Working between Christmas and New Year's is a double edged sword.…

Sorry, this is literally last minute. But the link quality will be to our usual standards. I am convinced that…