A Deep Dive into Cryptocurrencies and Their Operation: Part 2

We’re going to start here in Part 2 by talking generically about some of the hurdles that cryptocurrencies have had to overcome, then we’ll define some terms, and finally we’ll put all the pieces together into a basic model of how a blockchain-based cryptocurrency works.

Traditional Ways of Passing Data through an Untrusted Medium

Let’s do a quick survey of a few ways that important data can be passed through an untrusted medium (i.e. the Internet). You’ll recognize some of these from Part 1.

Pretend you have a secret message that you want to send from your computer to your friend’s computer. An easy example may be a message including your credit card information to purchase Glibertarians pink footie pajamas. How do you send that information from your computer, through a bunch of network devices (routers, switches, etc.) that are owned by neither you nor your friend, and to your friend without being intercepted by a nefarious third party?

Sometimes, you’re sending a bunch of secret information across the network to the same place. The most common example is when you’re working from home. You’re transacting a bunch of secret information with your corporate servers, and it may be easier to just establish a secure channel between your computer and the corporate network so that you don’t have to manage the overhead of encrypting the info piecemeal. What am I describing? VPN.

This doesn’t really have anything to do with blockchain, but it gives you a bit of context about how security can be implemented over the Internet.

Trusted authorities also have nothing to do with blockchain, except to act as an opposing contrast to the way blockchain works. We talked in Part 1 about the two ways that public key cryptography can be used. One way is to securely send secret information across an untrusted link. Another way is to sign a message and validate that the message came from the person you think it did.

What if I want to know that you’re legit before I send you all my personal information? STEVE SMITH could easily insert himself between  you and me, send me his public key, and then intercept and decrypt my response. This is called a “man in the middle” attack. Rather than just trust that the public key you supposedly sent me, I can reach out to a trusted 3rd party, who has your public key on file. I request your certificate from this trusted 3rd party (called the Certificate Authority), and compare the public key in the certificate with the public key you sent me to make sure it hasn’t been meddled with. The weakness of this method is that you have to trust the security of the Certificate Authority (the most well known CA is VeriSign).

Centralized, Decentralized, and Distributed: A Libertarian Way to Organize Things 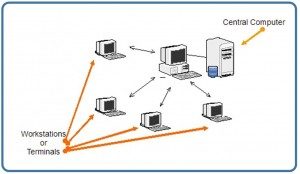 * You could argue that Amazon runs a decentralized system, because there are Amazon servers all around the world to share the load of so many people shopping simultaneously. However, for this description, “centralized” refers to only one “entity”  being involved, no matter the number of physical servers.

Decentralized systems are less common, but are still used on a regular basis. I want to refinance my house, so I go to LendingTree or any one of the other online insurance brokers. I input my information, which is sent to a handful of banks and other lenders, and each lender returns the request individually. If one lender doesn’t respond, it’s not quite as efficient, but I still have access to all of the other lenders. 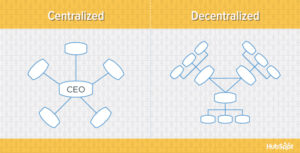 What if we take it a step further? Rather than a handful of entities, everybody can be an entity and everybody interacts with everybody. For example, Uber. You submit a ride request, and other people choose whether or not they want to fulfill that request. Uber isn’t perfectly distributed, as there is a barrier to entry before you can drive for Uber, but the barrier is low enough that it’s essentially distributed for our purposes. 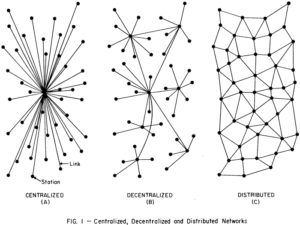 How Transactions are Verified when Nobody can be Trusted

What about the second obstacle? Well, that’s a little more complicated and involves some economic incentives. We’ll get into this in more detail in Part 3 of this series, but suffice it to say that pulling off a con to steal somebody’s cryptocurrency involves an impossibly large amount of computer resources, and an immense amount of luck. The incentive to steal is way overridden by the costs of acquiring the raw processing power required to make such a con even remotely possible.

How does bitcoin get stolen, then? Usually some currency exchange website is hacked, and the private keys of users’ accounts (wallets) are compromised. It’s not a flaw in cryptocurrency, but in the exchange’s security. Blaming such hacks on cryptocurrency is like blaming the US Dollar because Chase’s system gets hacked.

Bitcoin – The original cryptocurrency that is trading for somewhere in the neighborhood of $11k per Bitcoin at the time of writing. You don’t have to buy full Bitcoins, but can buy as little as 0.0000001 Bitcoin.

Smart Contract – Some uses of blockchain are less tightly coupled to currency. Ethereum, for example, is a broader use blockchain system, and includes smart contracts, which are publicly inspectable contracts that are mostly self-executing. For example, if getting the wifi password is keyed to paying your rent, the smart contract will retain the new month’s wifi password and will not release it to the tenant until rent is paid.

Fork (of blocks in a chain) – A condition of the blockchain where two blocks are created and verified by different nodes in the network at substantially the same time. In such a situation, there is a “fork” until the next block is verified. Whichever forked block is retained by the node that verified the next block is the “winner”, ending the “fork.”

Wallet – A data structure built around a user’s private key that retains all of the cryptocurrency that has been transferred to it.

Exchange – A website that retains a cryptocurrency wallet for each of its users. Exchanges are like a cross between a bank and an investment broker.

Blockchain? Is That Some New Type of Jewelry? 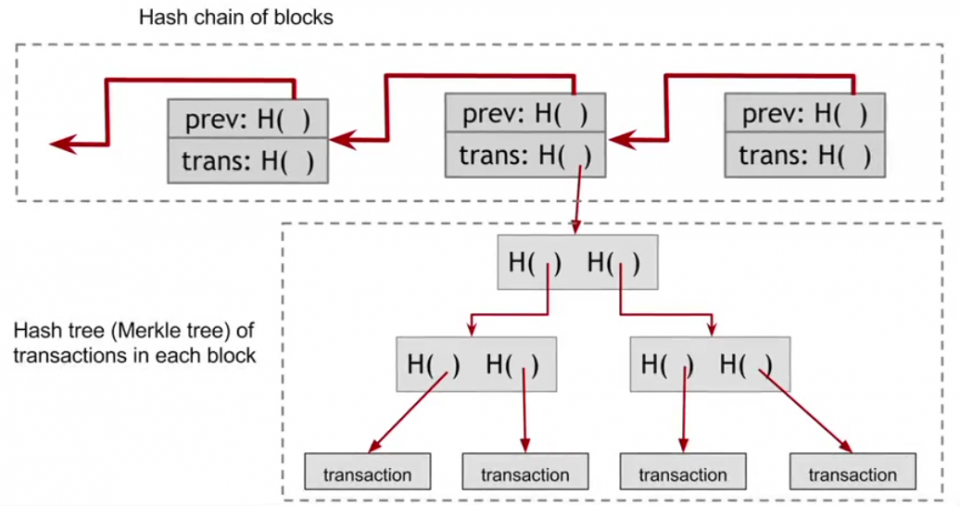 Here is a very high-level view of what a blockchain looks like. You have ledger of transactions arranged in a tree form (a tree is a linked data structure kind of like a linked list, but with more than one relationship saved in the structure. For example, in a binary tree, each “parent” data structure has two “children”). The actual transactions are located in the leaf nodes (a leaf node has no children), and the root is the top parent node. The Merkle tree (the specific type of binary tree used for blockchain transactions) calculates the hash of each transaction, and then continues to hash the combined hashes up the tree until we get what’s called the Merkle root hash (shown as “trans: H( )”). The specifics of how all this works isn’t super important, and it’s fairly intuitive once you understand hashing. You’re essentially taking hashes of hashes until you get one single hash that represents all of the transactions in the block. Why do we want that?

The last concept I want to bring up in this article is the increasing security over time. How does that work? Well, it has to do with the linked list of blocks. Let’s say we have three blocks that STEVE SMITH wants to corrupt in order to steal some cryptocurrency.

STEVE SMITH will have the easiest time corrupting block C. Why? Because all he has to do is change the transactions and calculate the new hash for C. I say “all he has to do” as if it’s easy. We’ll talk in Part 3 about why this is nearly impossible to do. However, let’s assume for a moment that STEVE SMITH has a ton of computing resources and it isn’t quite nearly impossible to corrupt C anymore. Now, let’s see why the older a block is, the harder it is to corrupt.

STEVE SMITH sees a huge transaction of cryptocurrency in block A and wants it for himself. In order to pull of his heist, he alters the transaction in block A, but now A’s “My Hash” is wrong (we’ll discuss tomorrow how the network knows it’s wrong). STEVE SMITH then spends a bit of time calculating A’s correct new My Hash. Once that’s done, there’s still a problem. B’s “Prev. Hash” is wrong, and the network will see the obvious inconsistency. STEVE SMITH changes B’s Prev. Hash to match A’s My Hash. Great! All fixed!

But wait! B’s My Hash is calculated in part using B’s Prev. Hash, so now B’s My Hash is glaringly wrong. With a sigh of frustration, STEVE SMITH begins the time intensive process of calculating B’s new My Hash. STEVE SMITH, being one of the smartest of his race, sees that block C is going to have the same issue, so he quickly updates C’s Prev. Hash after figuring out B’s My Hash, and begins cranking on C’s My Hash. Finally, after a bit of time, STEVE SMITH has updated the blockchain and his crime was a success!!

Or not. See, while he was cranking hard calculating new hashes for three blocks, the blockchain network was adding new blocks every few minutes (10 minutes for Bitcoin). His fraud sticks out like a sore thumb because blocks D through L all have the wrong hash when his “modified” blocks are included. In order for STEVE SMITH to succeed in his nefarious plan, he would need to control a significant portion of the entire world’s computing power, something on the order of 45% of the blockchain would need to be controlled to give his plan even a dismal chance.

I’m going to stop here. We’re going to dive down to a place where giant octopi and fish with bioluminescent lures live in Part 3. We’ll discuss the details of how hashing is extensively used in the blockchain, how incentives are used to increase security through mining, how blockchain can be used outside of cryptocurrency, a description of the major cryptocurrencies and what they’re useful for, and some of the drawbacks of cryptocurrencies.

Well, the thermometer finally got off of -1 degree...all the way up to 0. *narrows gaze at weather station* I…

We are all  busy drinking cocoa and playing with our new toys...so links are sparse and later than usual this…