‘Twas the Night Before Glib-Mas

‘Twas the night before Glib-Mas, and, purged of endorphins,
Not a creature was stirring – not even the orphans.
Booby traps and alarms were set, in fear
That old rapist STEVE SMITH might decide to appear.

The Glib Ones were nestled, each snug in their bunk,
Each Glib Girl and Anarchist, and reg’lar old punk.
Both I and my mistress, who looked really super,
Were succumbing to an alcoholic stupor.

When, all of a sudden, ere I could rebuke,
Our Glib-house was hit with the force of a nuke!
(I exaggerate, of course, but still, I was shook up
And upset at the interruption of my hook-up.)

I ran to the window and threw open the pane.
Dark clouds had gathered, the moonlight did wane –
And above the night wind’s blistering howl,
I heard a voice; no, it was more of a growl:

“ALL OF YOU TROLLS, BE READY FOR TAKEOFF!
STEVE SMITH GO IN HERE, THEN WE WILL MAKE OFF
WITH THEIR GIFTS AND PRESENTS AND CHRISTMAS BOOTY –
ALL TROLL FLIGHT CREWS ATTEND TO YOUR DUTY!”

I cowered in fear, for from childhood I knew
Of the legend of STEVE SMITH and his murderous crew –
Eight ugly trolls pulled his magical sled;
The very sight of them filled grown men with dread.

I stood frozen in fear, stuck right to the floor
And heard massive footprints approaching my door;
Then, at the last moment, dived back of a chair –
My door was kicked open, and then, standing there

Was STEVE SMITH, in all of his horrible glory,
His dank body hair matted and gory.
He possessed two incredibly bloodshot eyes;
Oh, and a phallus of enormous size.

The creature turned and gave me a wink,
And just as I was beginning to think
That I was a goner, now it appeared
Perhaps things would not be quite as I feared.

Instead, he turned his attention to see
All of the Glib-gifts under the tree.
Then it hit me like a clap of thunder –
His purpose and intention to plunder!

All the things we had bought, he stuffed into a sack,
Our unopened presents, he proceeded to pack.
All of the firearms, sex toys, and lube,
Our home-brew kits, our blow-up dolls – hey, rube!

This was our whole holiday he was stealing,
But as I stood there, I had the feeling
That if I tried to stop him, he’d pound me, I knew
Into a greasy little pile of goo.

So while I stood cowering, tame as a mouse,
The creature went all about the house
Taking all that he wanted; why, he even took
Every Ayn Rand and Hayek and Mises book.

When he was finally done, he heaved a great sigh,
And again fixed me with a bloodshot eye.
Though the beast seemed to be in a jovial mood
I had only one thought: Holy crap, I am screwed.

But as I stood there trembling, my mouth agape,
The monster assured me: “DON’T WORRY, NO RAPE –
STEVE SMITH EXHAUSTED AFTER LONG NIGHT OF THEFT.
ALMOST FEEL SORRY, YOU HAVE NOTHING LEFT.

BUT REMEMBER THIS: GLIB-MAS NOT ABOUT EARTHLY THINGS
BUT FREEDOM AND ALL THE JOY THAT IT BRINGS.”
With that he stepped out, with his large pack fumbling,
To his sled and his slave-trolls all a-grumbling.

Within moments the over-burdened sleigh
Rose into the sky, and then away –
Leaving only a horrible stink.
“No one will believe this,” I started to think.

I was up the rest of the night explaining;
I really don’t think I deserved the caning.
Ah, well. As STEVE SMITH said, as he vanished from sight,
”MERRY GLIB-MAS TO ALL! AND TO ALL A GOOD NIGHT!” 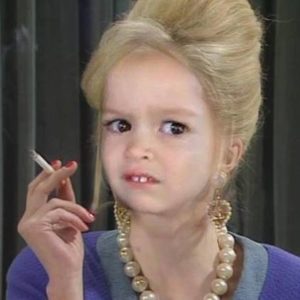