Nephilium’s Games Corner – On the internet, no one knows you’re a Glibertarian

Last time, we discussed two player games.  But what to do if you can’t even scrounge up one other person to play with?  Like most things, the answer is on the internet.  Specifically, the answer is on several websites that allow players to play games online, and enforce the rules (which can help you learn that you were playing a rule incorrectly previously).  I’m going to focus on just two of the sites that I use, and focus on the games that one of the sites has on it.

The first site is Boite-A-Jeux, a site based out of France that allows for a large number of games to be played.  You can sign up for a free account, which permits play of all of their games.  What it doesn’t allow you to do is modify any of the time restrictions when setting a game up, so if you’re a free player, all of your games will have a timeout on moves of 30 days.  You also cannot write notes in the game, nor can you select your prefered color of pieces, and you’re limited to being in 20 games at a time.

The second site is Board Game Arena, which has a different selection of games (there is only 1 game that overlaps both sites that I’m aware of), and also allows free accounts.  Here, free accounts cannot create tables for all of the games, but can join them.  BGA (Board Game Arena), allows you to play in real time, or turn based.  In both modes, you start with a bank of time, and each turn you complete adds a set amount of time to it.

Both sites will remove players if they run out of play time.  On BAJ (Boite-A-Jeux), you can request a replacement player for a player who has had their time expire.  The person kicked from the game has it count as a loss for them, and the new player can join a game that will not affect their ELO score.  BGA allows you to skip players when they run out of time, but the game as a whole is considered a forfeit from them at that point, and everyone else is considered a winner at a percentage based on how much of the game was completed.  I prefer BAJ, but I’m here to give options.  BGA has both Incan Gold and Jaipur which I discussed before.  Now to go to some heavier games that are on BAJ (but not BGA): 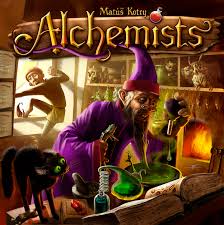 This is an interesting blend of hedging knowledge, hidden knowledge, and logic puzzle.  If you play the cardboard version of this game, it requires either a smartphone application or a player who acts as an adjudicator (and doesn’t get to play).  There are 8 different ingredients, and there are 8 different “alchemicals” that can be associated with them.  Each alchemical is made of three parts, one of each color (red, green, and blue).  Each of those parts has two attributes associated with it: the size (small or large), and the sign (negative or positive).  Through using artifacts, testing potions on yourself (and a student), and selling potions, the key is to determine what alchemical is associated with each ingredient and publish the theory.  The logic system is fairly simple, a small and a large of the same color and sign make a potion.  So if you mix something that has a large red negative with a small red negative, you get a negative red potion.  When publishing a theory, you have the option to either claim it with a flag that’s worth points at the end of the game, or you can hedge one of the colors.  So if you know that scorpion has a negative red and a positive blue, but you’re not sure on the green, you can publish a theory and hedge it on the green color.  Why would you do this?  Because one of the actions you can take is to debunk a theory that has been published.  The method of this is different based on the Apprentice or Master variant; but in short, you debunk a theory on a specific color and if there are any flags there that didn’t hedge on the color you debunked on, they take a large reputation (part of end game scoring) hit.  At the end of the game, all of the correct alchemical associations are revealed, and if you were correct (and not hedged) you score points based on the flag you placed, gold flags (of which you have 2) are worth 5 points, silver (of which you have 3) are worth 3.  You will also get points based on your gold and artifacts purchased through the course of the game. 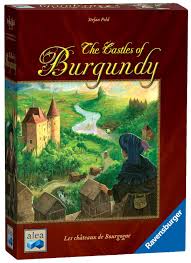 I’ve mentioned a couple of other designers in the past, and this game brings up another one.  This is a game by Stefan Feld, who is known for randomness (with mitigation options being available) and point salad.  I hear the question now, “What’s point salad?”  Point salad is a term used to describe games in which nearly every action gets you some number of points.  You put down a building – get 3 points, you completed an area – get 8 points, you took some workers – they’ll be worth points at the end of the game.  The key in his games is to optimize the points you are getting for the actions you take.  Castles of Burgundy is one of the more popular of Feld’s games.  I prefer playing this online, as it makes the setup between phases and cleanup much easier.  The game plays between 2-4 players, and scales the options available based on the number of players.  This game is played by having all of the players roll 2 dice, and then in turn order use their 2 dice to take actions.  The actions are as follows:

Workers allow you to modify the number you rolled by +/-1 per worker used helping to mitigate the randomness.  For the other three actions, you can only take the action if the number on your die matches what you want to do.  The central board has seven areas: 6 associated with the faces of the die, and one that represents the black market.  Each player’s personal board also has numbers in every hex, and when placing a tile, you must match that number, be next to a tile you have already placed, and the tile you’re placing must match the color of the hex you’re placing it in.  All tiles provide either an immediate effect, an end game effect, or an ongoing effect.  The game is over after 25 turns, with the high score at the end being the winner.

Game 3) Sacrifice is the name of the game.  Deus 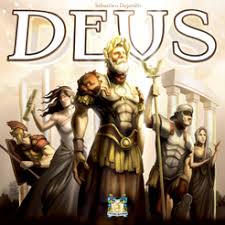 If you meet those requirements, you then activate all of the cards of that type from the earliest played to the one you just played.  There’s also a sixth type of building called a Temple, which only requires you to be able to afford the cost, and have a space on the board with at least one of your pieces on it.  The temples will give you end game points for meeting specific goals.  If you can’t build, then you need to sacrifice to one of the five gods.  This is done by selecting one card, and putting as many other cards from your hand under it.  The whole stack is then discarded, and you receive the bonus for the card on top.  Each god gives you different items, from coins, goods, drawing extra cards, victory points, and/or more wooden buildings to place on your board.  The other way to earn victory points is to surround a barbarian village with at least one military unit assisting.  The barbarian village is then removed from the game, and the player with the most military units around it gets the points the village is worth.  The game continues until one of two endgame criteria is met: all barbarian villages are removed from the game, or the communal supply of temples is exhausted.  At that point, everyone has two final turns to score themselves some more points, and the game ends.

Feel free to invite me to a game on either of the services, I’m under the same handle there.  Next time, I plan on finally writing about some games on the heavier side of the spectrum. 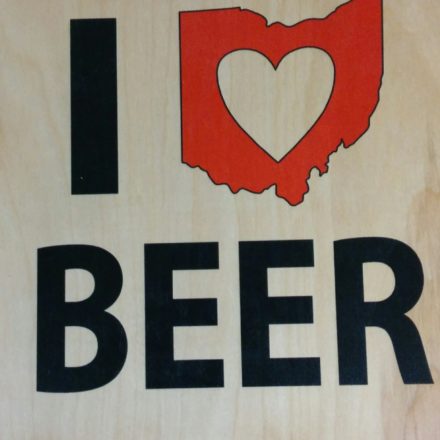 STEVE SMITH HAPPY TO SEE FUNNY GLIBERTARIAN PEOPLE AGAIN. WAS AFRAID MOST OF YOU FROZE. STEVE SMITH DOES NOT LIKE…

This is my review of Bell’s Brewery Roundhouse India Red Ale. Yeah, okay so they just hopped up Kilian’s Irish…