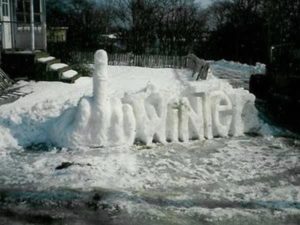 I concur with this snow sculpture.

This week keeps dragging on and on. And it seems to be getting colder as it does. I know its gonna finally get into the 50s here today and back into the 60s on the weekend so I’m not gonna bitch too much.  But still…I hate cold weather. And most of a week in the 20s and 30s for me suuuuucks.

Not too much going on in the sports world yesterday. This article was written.  You know, heaven forbid a team hire who they want without wasting other people’s time and money checking off a stupid box. It’s insulting to professional coaches and insulting to what are essentially the token blacks being brought in for no reason other than to comply with a race-based rule. Maybe some players should propose a Rooney Rule for white receivers and running backs. That would get panned as racist, while on the other hand, this desire to judge people by the color of their skin rather than the content of their character coaching ability is viewed as “progress” of some sort.

In hoops, Brett’s Seminoles took down the Tar Heels last night. Kentucky barely beat LSU. Oklahoma rolled. Miami fell to Ga Tech. Clemson, UVA and Purdue all won. On the ice, the Red Wings and Blackhawks took care of business. And across the pond, Arsenhole and Chelski played to a draw.

Didja get all that? Do you really care? Doesn’t matter. Time to move on anyway into…the links!

This man would rather appease a terrorist state than stand beside a boor.

Iran’s Revolutionary Guards on the move to stamp out “sedition.”  That can’t be a good sign and I hope the move is condemned by the leaders of free countries.  But don’t count on the leader gf Froglandia to do so. He’s too busy calling Trump out for his “inflammatory comments” that have been little more than supportive of the people protesting the barbaric assholes who throw gays off of water towers and stone unescorted rape victims to death.  Way to stand up for freedom, Macron…you worthless, cowardly piece of shit.

I swear, this current storm is like a movie plot. If only it had waited until The Day After Tomorrow then it wouldn’t be causing so much havoc.

A 4.4 magnitude earthquake hit this morning near Berkeley, CA. No word from local authorities if its because of man-made global warming or if it was Trump’s fault personally. Either way, there’s no way it could have been a naturally-occurring event.  Serious traffic delays are expected.

Don’t get excited. Apparently this is NOT footage from yesterday.

There was a fire at the Clinton house in Chappaqua, NY. No injuries were reported and it was quickly contained.  And all we have to do now is wait for the “surprising” news that it unfortunately burned up [insert something that was either under subpoena or had been requested under FOIA] but that the former SoS and President were doing their best to comply with [insert name of agency that had demanded it be turned over].

As the latest member of the Kennedy cabal family enters the political world, so does mudslinging. This time its accusations of racism. And I can’t see how its gonna help him any.  Who knows, maybe he was just doing what Kennedy’s do best before going out in public: getting drunk.

I’ve had to discipline employees in the past.  But I didn’t do it quite like this. In the guy’s defense, I’d like to see photographs from the time for a little context.

And last but not least: Houston keeps winning!

This album cover reminds me of this week for most of the country. Plus I like the song.