One of my family members is an online instructor that teaches classes to UN refugee camps around the world.  I respect this person very highly, so when he sends me an email with the title “What Kind of Legacy are We Leaving You?” I feel compelled to engage in the discussion.  His students were to read an excerpt from Viktor Frankl’s book “Man’s Search for Meaning”, Plato’s “Euthyphro”, and to describe their own search for meaning.  The email he sent to me consisted of one student’s response.  The student is not a native English speaker and relayed his experiences outrunning war in Africa and the Middle East.  I am not going to write the entire message here but focus on a question the student asked in response: “Let me ask a question, does it mean that from all the way back to thousands of years ago education has done nothing to stop wars?”

This is a sentiment that I started to wonder a little while ago. I enjoy reading about world history and economics and a repeated theme is the idea that we have come so far, we are so educated, that surely this time we’ll get it right if we just have the right people in charge. This time our society will be perfect, a Utopia. It’s a common theme in dystopian novels but frequently reflected in the speeches of many people who consider themselves to be revolutionaries. 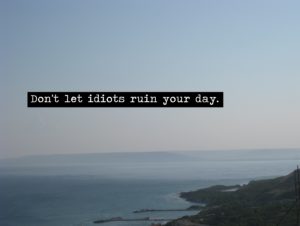 Or, y’know, your Utopia

And yet, within a few short years of uttering this sentiment, those societies tend to collapse, almost always violently.

Surely the next time we will be more educated. We will get it right. We just didn’t have the right people in charge or some “other” ruined the dream.

It almost implies that education bestows a moral high ground. If we were more educated, we wouldn’t have so many wars, people wouldn’t starve, and we could get the best and brightest to solve our problems. In many ways our increasing knowledge has alleviated much of human suffering to those who are the beneficiaries of it. Crop yields have increased several times over because of what people have learned and the technology that came with it. In stark contrast, education also creates the most terrible weapons of war.  Atomic bombs can wipe out the same population that those increased crop yields can support.  It has struck me as an interesting dichotomy.

If education implies morality, then being uneducated must mean that you are little more than a barbarian, and yet we know that that isn’t true, either.  Many of us have grown up with or have met many people in our lives who would be considered uneducated but are the most wonderful people to be around.  In stark contrast stands the individuals who would lord their education levels over others in search of that distant Utopia.  This, of course, is not always true and is not meant to be a generalization of either educated or uneducated individuals.

The implication isn’t that we are pursuing the wrong means for Utopia. The implication is that we can’t escape our base instincts except by conscious choice, and even then, we cannot force others to accept it without conflict.  His question neither condemns nor condones education. To me, it succinctly illustrates human nature. Education is another tool mankind has created. It cannot bring us any closer to the Utopia we so desperately desire, but if we recognize that we cannot truly escape our instincts, we can use education to help each other in greater and more fantastic ways, as human beings have always done.

ZARDOZ SPEAKS TO YOU, HIS CHOSEN ONES. ZARDOZ MANAGED TO GET OUT OF HIS LANE OBSTRUCTION TICKET. ZARDOZ BELIEVES THE…

This week is going to be a little bit different.  I’ve been trying to stick with games that are easily…