Trigger Warnings: rampant misogyny and unnecessary cursing. I don’t claim to be a professional journalist, nor do I care to write in an erudite fashion. That’s Heroic Mulatto’s job. But, unlike HM, I do bring the alt-text.

I’m not normally a McDonald’s guy.

I don’t have any problem with them, from a philosophical standpoint. They make something they claim to be food, and bizarrely, many millions of people enjoy these products and shower them with money. It just typically isn’t something that I enjoy eating.

Last week a buddy of mine told me to swing by and try their new Buttermilk Chicken Tenders. So, on my way home from work today, I stopped in to give this new item a fair hearing.

Let me tell you, those things are delicious. I will seriously go there at some point in the future specifically to get those again.

But enough about the food. As I was standing to the side of the counter waiting inexplicably for seven minutes (I thought the whole point was, “Yeah it sucks, but it’s fast“?), I noticed the young lady who took my order was a very attractive young Hispanic woman. Pretty face, perky tits, hips, the whole nine yards.

I looked back into the kitchen, and saw at least two other relatively hot Hispanic chicks. So I started thinking to myself, man, if I hadn’t already been dating my eventual wife when I graduated college, this would be a totally sweet fishing pond for random ass. I mean, how picky can they possibly be? They work at fucking McDonald’s. 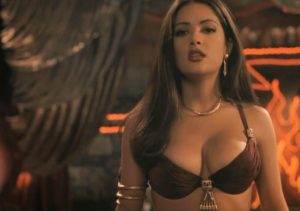 This is what the girl who took my order looked like. More or less.

So my 25 year old self would roll up, strike up a conversation, and be like, “Hey – I’ve got a regular job in a cubicle, involving Excel formulas and v-lookup. I make enough so that I don’t get a 100% refund on my taxes. I have a late-model car that isn’t upside-down financially, and my own apartment. I can take you out to dinner – at a sit-down place with a leather-bound menu. And I eat pussy like it’s goin’ out of style.”

In my mind’s eye, at that point, any chick with little enough command of English and even less economic prospects would pretty much just drop her drawers. “Oh I suck yo dick!”, she says in a Vietnamese accent for some reason even though she’s clearly Mexican or Central American (damn you Full Metal Jacket for permanently fucking up my internal monologue when it comes to casual sex!).

It’s kind of like my version of slumming. It would have been fun, and I would have had access to free McDonald’s, which I recall not being as gastronomically opposed to 10 years ago.

That’s pretty much it. Oh, and I saw this flier on the way out. It was some kind of community outreach bullshit. What really drew my eye was one of the items listed among the other boiler-plate stuff like fundraisers and sponsorships. “Store Tours”. Um…what? How in the ever-loving fuck is giving a tour of your fucking shit-shack of a goddamn fucking store, and I fucking quote, “Giving Back To Our Communities”??? 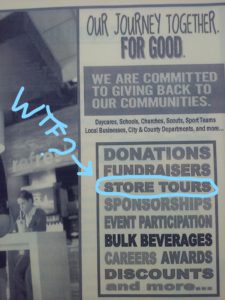 Our journey together for good? So do the McDonald’s locations in Snake Mountain and the Hall of Doom say, “Our Journey Together For Evil”? 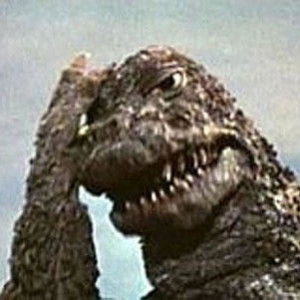