For those of you of an AnCap mindset, this article is probably not of much benefit. But for those of us that think a minarchy is necessary (and sufficient), the discussion of how to fund a micro-state is of more interest.
Also, yes, this will be, in large part, a discussion of the Single Land Tax (SLT.) This is not the article on the SLT that I promised a year ago, but this is the one you are going to get. At least for now.

Recent discussions of the SLT have got me thinking in different ways and led me to what I needed to do. it’s the answer to almost every problem: DO THE MATH 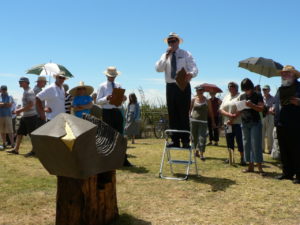 I. Let us start with the premise of this thought experiment. A group of libertarians discovers a previous unfound island or planet or whatever. Either way, whether on sea or through space, I am pretty sure the ship is named Der Sausagefest. This land is entirely undeveloped. Their established minarchy will never spend any money it does not already have in its coffers. The land needs to be divided in a just manner. So they decide: We will divide the land into parcels and auction off the parcels. However, the auction won’t be for the price of land, the bidding will be the amount of land tax you (or any future owners) are committing to pay on the parcel each year going forward for all eternity. The land itself will be free, and come with complete property rights, except for being encumbered with the tax.

There shall be one exception to the eternal nature of the tax: if the owner wishes to, he may forfeit the property back to the state for re-auctioning. He may decide the tax is too damn high and try to “buy” It back at a lower tax. Or he may just decide he doesn’t want it. Whatever.

The libertopian state will have a fixed income based on the initial auction. As it is sensible, the currency will be something like gold that is stable over the long term and so inflation won’t be a problem.

II. Why an auction for the tax amount instead of selling the land? Technically, they are the same thing. The price you would pay is equal to the present value of the future cash flows of the property. And the same for the tax stream, the amount you are willing to bid is a stream with the same present value. But I can think of 3 reasons that the tax is better than an upfront cost:

1. I don’t trust any state, even libertopia, with a large sum of money. Better to give them an annual income than a lump sum.

2. While the state could turn around and invest the money, generating the same income stream as the tax, that involves the state choosing investments. We have seen how well that kind of thing works with CalPERS, for example. We don’t want the state choosing winners or losers or getting some PC thing going and divesting from the hookers and blow industries.

3. This one is a little weird, and if you want to discount it, so be it. But the make-up of the initial libertopians may be diverse. Some will be flush with cash, others may be poor. While the poor could get a mortgage to pay the initial cost, that adds a level of risk that would lead to lower bidding by them. I find the stream payment to be more equitable.

I see the obvious argument against the tax vs initial purchase price idea. The former is effectively an eternal mortgage, while the latter is over and done with. But as they are mathematically equivalent, I don’t see that as an actual issue. As I said in the introduction, we have to do the math.

I. None, probably. But I was thinking about it for two reasons. First, the recent discussion in which UCS and RCDean questioned the reality of imputed value. The fact that someone will pay for undeveloped land shows that imputed value or economic rents or whatever is a real thing. Even in my scenario, people would bid a positive amount for the plots, which implies that the imputed value is, in fact, a real thing that they do value.

The second, and possibly more important, reason was that I have been thinking about what a land tax would due to the resale price of unimproved land. I came up with an answer but didn’t really like it. Hence, I had to do the math. And this gedankenexperiment was the result of that. A properly valued land value tax that was exactly at the value of the economic rents (no more and no less) would reduce the resale price of unimproved land to zero.

That isn’t actually a real life situation though, as “unimproved” land is all but non-existent. Think about an empty lot in a neighborhood. Is it unimproved? Does it have a road bordering it? That is an improvement that increases the value of the land. So is a functioning court system. And deeds that can be trusted. And national defense. While they aren’t DIRECT improvements to the land, they all increase the value of the land. Being secure in your ownership is an improvement.

In fact, it might even be a flaw in my gedankenexperiment. The landing of the spaceship Sausagefest may have improved the land. But it’s a small enough improvement that I stand behind the results.

II. So how do we get from here to there? We really can’t. Without a tyranny, we can’t take all the land and auction it off. The land has improvements anyway. It would take a series of nukes to unimprove the land. The good thing about the auction was it valued the land tax properly. If we implemented one, it wouldn’t be done that way. A rate would be set, valuations would be calculated, and a crappy fiat money system would be used that wouldn’t allow anything like a stable pricing system. Humans would be involved and they screw everything up. Plus, people did pay for their land, and some of them oppose the idea of having to pay rent on it forever, too. Even if it did mean getting rid of every other form of taxation. Like any change in the tax system, there would be winners and losers (even if overall taxation was cut to a level that we won big overall), which is why it is so hard to make a change.

The Georgist Single Land Tax is a utopian fantasy. And I still favor it over the current system or any other anyone has proposed.