Tricks of the Trade: The Horoscope for the Week of April 29th

So you want to be a fortuneteller.  Congratulations!  You’re a moron!

There are a very few limited instances when putting up a crystal ball shingle is a good less than catastrophically bad idea:

In the same vein as giving a junkie some chlorox with which to sterilize their shared needles, here’s a little advice about succeeding in the X-mancy business. 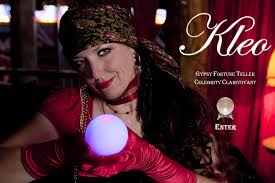 This is the look you’re going for

First off, be a woman.  You might get away with being an astrologer with a Y chromosome, but for palmisty, cartomancy, scrying or psychic reading ain’t nobody gonna pay you for your opinion.  Once you are a woman, invest in chunky jewelry and scarves.  Consider dying your hair, but for the love of Gaia, do not have it professionally done.  You need to do it yourself.  The look you are cultivating is “sketchy.”  Respectable people make crappy fortunetellers.  There needs to be something… off about your appearance — the difference between “underbridge dweller” and “reclusive gypsy” is in the attitude and how you set up your surroundings. 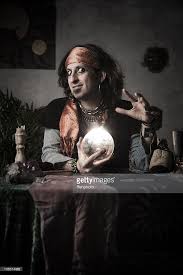 Do you think you’re psychic?  Great!  This is going to help lot.  It’s like they say, “sincerity is important, once you can fake that, you’ve got it made.”  The most successful psychic I know acts exactly as if they believe their own bullshit completely.  She has never dropped the facade in front of me.  Remember, you’re mostly a salesperson at this point, so have confidence in your product!  What if you can’t actually believe that you have the power to foretell the future?  Well, there is a solution to that.

Remember the oracle at Delphi?  Paint huffer.  Not from a spray can, but all natural organic hydrocarbons straight from Mother Earth’s crack.   If you want to go with the classics, you can choose ether, but what with the usual accouterments of candles and incense, I wouldn’t recommend it if you don’t want to go all Richard Prior.  But be careful that you don’t overdo it.  “Not entirely safe, not entirely sane” will draw the attention of the mark; “Crackhead” will have them scurrying for the door without paying.  The point of the drugs is to take the edge off your internal censor and *ahem* “open your mind to” the possible connections between the real world and your divinatory tools.  The only difference between “psychic” and “psychotic” is “cot,” which is what you’re probably going to be sleeping on if you choose to ply this trade.

There is one skill that is pretty much mandatory if you’re going to make this business a sole/unaugmented source of income:  cold reading. This is a skill that can be learned, so do it.  Prestidigitation is also extremely useful, both for forcing cards and well… we’ll get to that 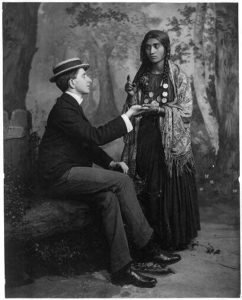 Notice that the mark must ALWAYS be wealthier than you

Last thing:  if you want to make real money, you’re going to need a permanent premises so that you can build a clientele of suckers.  And if you want to really take them for what you can get, you’re going to need to commit some felony-level fraud.  This is going to end badly, if for no other reason that former marks, even ones that you that you didn’t even rip off will eventually be upset with your advice and having a fixed place of business means they know where to find you to make their displeasure known, or to send the local constabulary.  If you are satisfied by the rewards of one-off clients and the occasional petty larceny (this is where prestidigitation comes in:  if you keep your workspace cluttered, claustophobic, and filled with garish colors and patterns, this can make the mark more distracted and less likely to remember that he set down something small and salable, particularly if he didn’t notice you palming it.) then it’s safer to adopt the M.O. of grifters everywhere and keep mobile.  Carney life here we come!  Actually, renaissance fairs are a pretty good deal for an aspiring fortuneteller: the one-person tent is the cheapest premises you can have and is perfect for the kind of work you need to do, you have a constant flow of new clients pushed right in front of your flap, and those clients are in a pretty good mood and won’t actually take your advice too seriously.  Plus lots of them are drunk.  Blessings to Eris and Dionysus for drunken marks!

I should probably also mention that dial-a-psychic is a thing that exists and my closest fortuneteller friend makes her living doing this, but I’ve never seen it in operation first-hand.  so not only do I not know anything about it, I don’t even know enough to be entertainingly ignorant about it. 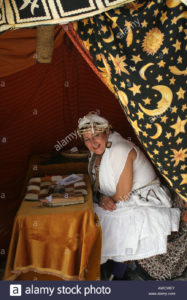 Now, on to this week’s chart!

This week has a couple of strong markers, and an oddly large number of tension/uncertainty indicators.  The more definite signs are for good fishing, and an extraordinary alignment (Sol-Mercury-Venus-Saturn retrograde) for relationships.  This is an excellent week to meet new partners, but a terrible week for breakups.  If the squeeze hasn’t gotten his crap out of the house KK, maybe it would be better to put it off until next week.  On the tension front, we have TWO different cross-alignments of opposition influencts;  we have change and stability signs on top of each other (Mercury in Capricorn) as well as balance/flux juxtaposition (Luna in Libra). If you are having difficulty figuring out WTF is going on in your life, this probably is why.*  The positioning last week that encourages sports betting  (Mars-Saturn retrograde in Capricorn) and masturbation  (Jupiter retrograde in Scorpio) remain this week, so have fun with that .

Mr. Riven and I just finished watching Infinity War. If you've seen and enjoyed the movies leading up to this,…

Sunday Morning Why Am I Awake Links

I badly wanted to see the documentary, The Rainbow Man, which covered the life of Rollen Stewart, a fascinatingly obsessed…