Life of Pie: living next to an old graveyard 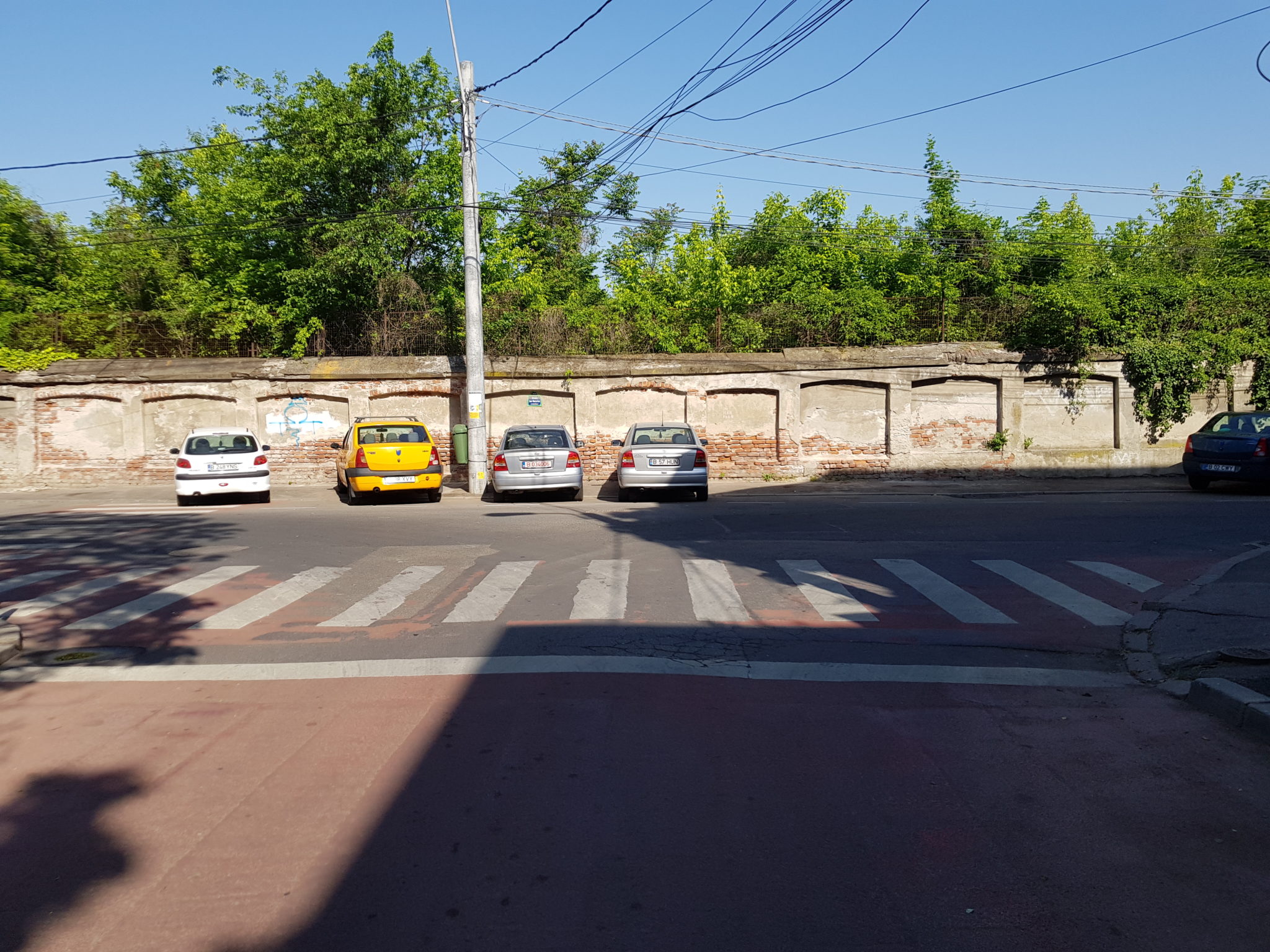 What is the meaning of life and death?

I live in a fairly central area of one of the busiest cities in Europe. At the end of my street- well not mine per se – is a wall. If this seems totally unremarkable to you, it’s because it is. It is an old wall, fairly long and not particularly distinctive. It does not have a gate or any another entrance on this side, and above it all you can see is tree tops. Most people who pass the wall have no idea what is behind it, nor do they care.

On the ehm… other side, so to speak, lies a quite old and mostly abandoned graveyard. Due to some peculiarity of human psychology, some people find living next to a graveyard unsettling. I am not one of those people. Being mostly abandoned, it is little more than an unkempt park, siting on 7 hectares of quite prime real-estate (600-800 dollars per square meter or maybe more) and containing some 30 thousand graves. The cemetery is no longer active, so you don’t have to see funerals –maybe one or two a year –  or mourners walking about as the graves are old and the families are no longer living in Romania. The cemetery is called Cimitirul Evreiesc Filantropia, meaning of which I assume you can eventually figure out without translation.

For most of my life I paid it little mind. It had, off course, some perks being an area with no buildings, it was quiet and provided glorious, available street parking, which in a city like Bucharest can be a godsend, so to speak. Usually the departed don’t drive, although they may still have a valid license and, on occasion, vote. 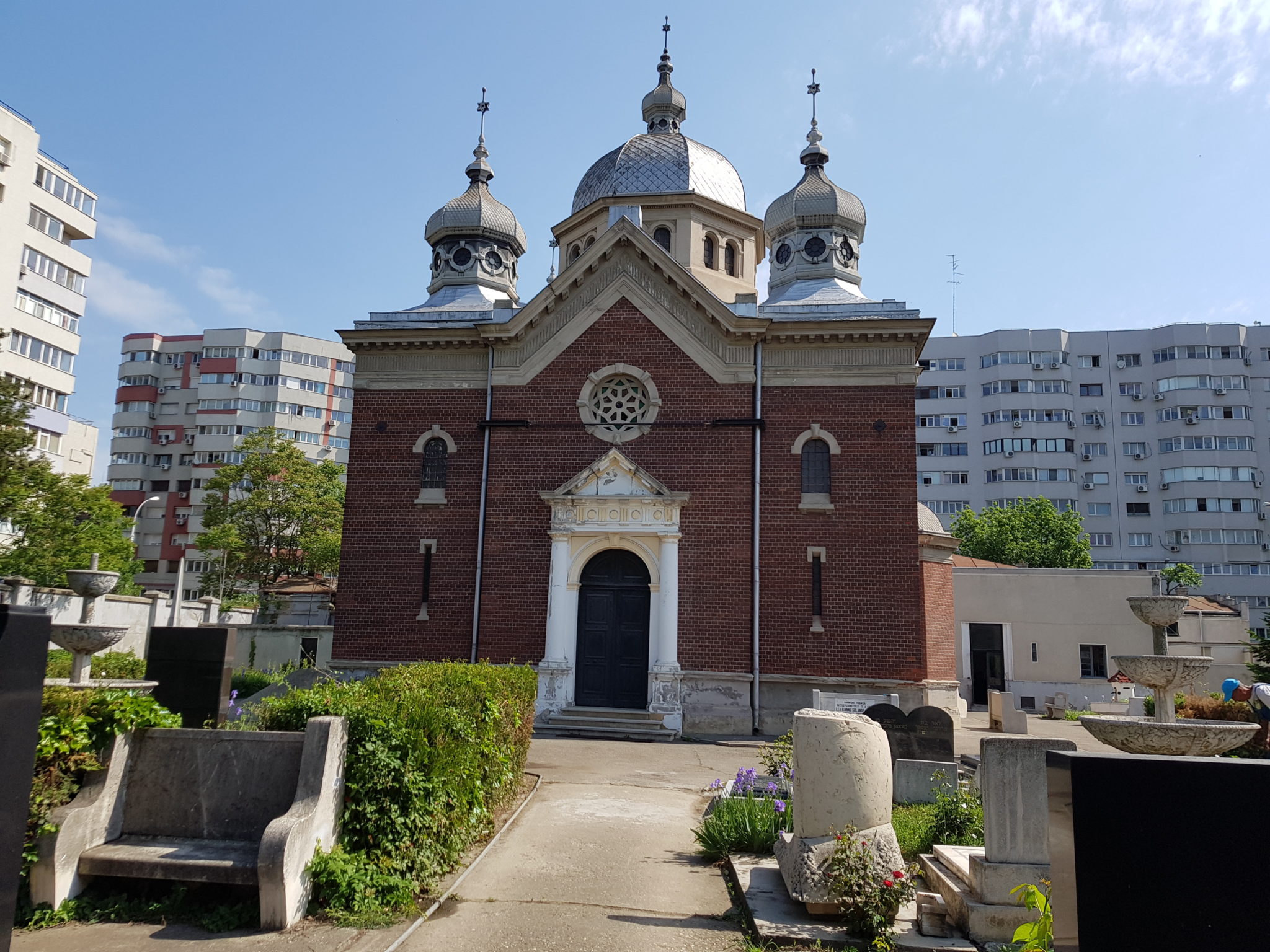 A good background is important

It is one of 3 Jewish cemeteries in Bucharest and, according to the caretaker, 832 recorded in Romania – although many have been destroyed under the Antonescu regime. This is an Ashkenazy graveyard, build in 1865 on the site of an old quarry. The other two, known as Giurgiu cemetery and The Spanish cemetery –incidentally on much less valuable real-estate – are Sephardic. Giurgiu is the largest of the three – 14 hectares – and second largest in Romania after the one in Iași.  I always though Ashkenazy versus Sephardic to be purely a geographical designation, a Jewish appellation d’origine contrôlée (AOC) if you will, but the cemeteries seem separate.

Sometime this year it occurred to me that I had never visited it to see what is beyond the wall. In cities like Paris, visiting cemeteries was a thing people did. I decided to change this, and one sunny Saturday morning I went to the entrance, only to find it closed. I did not know cemeteries close, but this one did, every Saturday. So on a sunny Sunday morning, I went for a visit. At first I was not even sure this was possible, to visit it I mean, but it was, with only the request that I wear a small round hat. And since I visited and took some pictures – not particularly good ones, mind you, I only have my phone and am a bad photographer – I thought I would share. So basically trigger warning – pictures of cemetery and graves and stuff, for those who do not want to see such things. Now, normally, I would not make a post on a cemetery, but found this one interesting.

After the entrance is the chapel. Beyond the main alley started. It was long – 1 kilometer or so- and looked like it got lost in distance and vegetation. 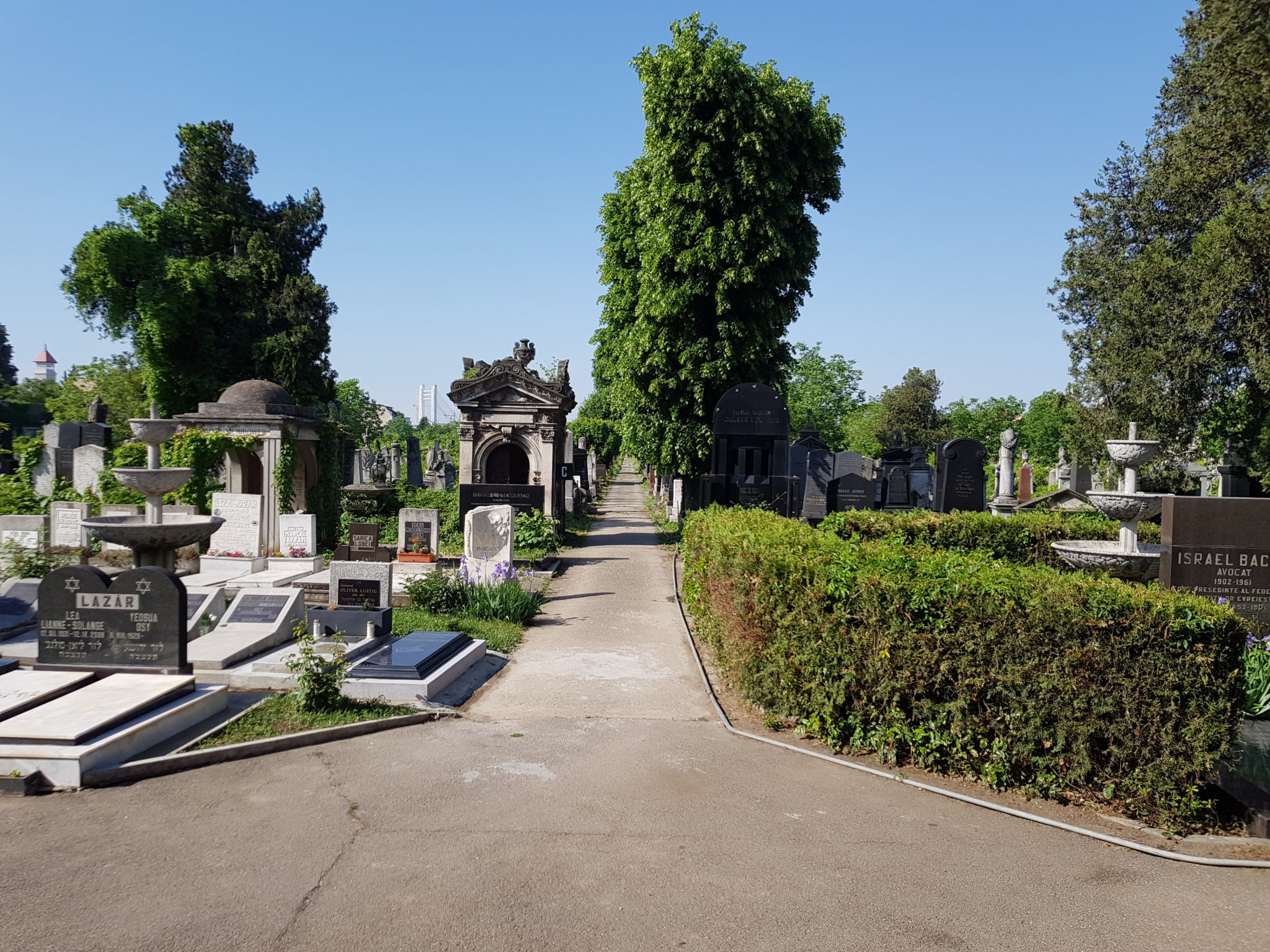 Walking down it, it had a sort of story atmosphere, as it became progressively less maintained and wilder as you moved along. 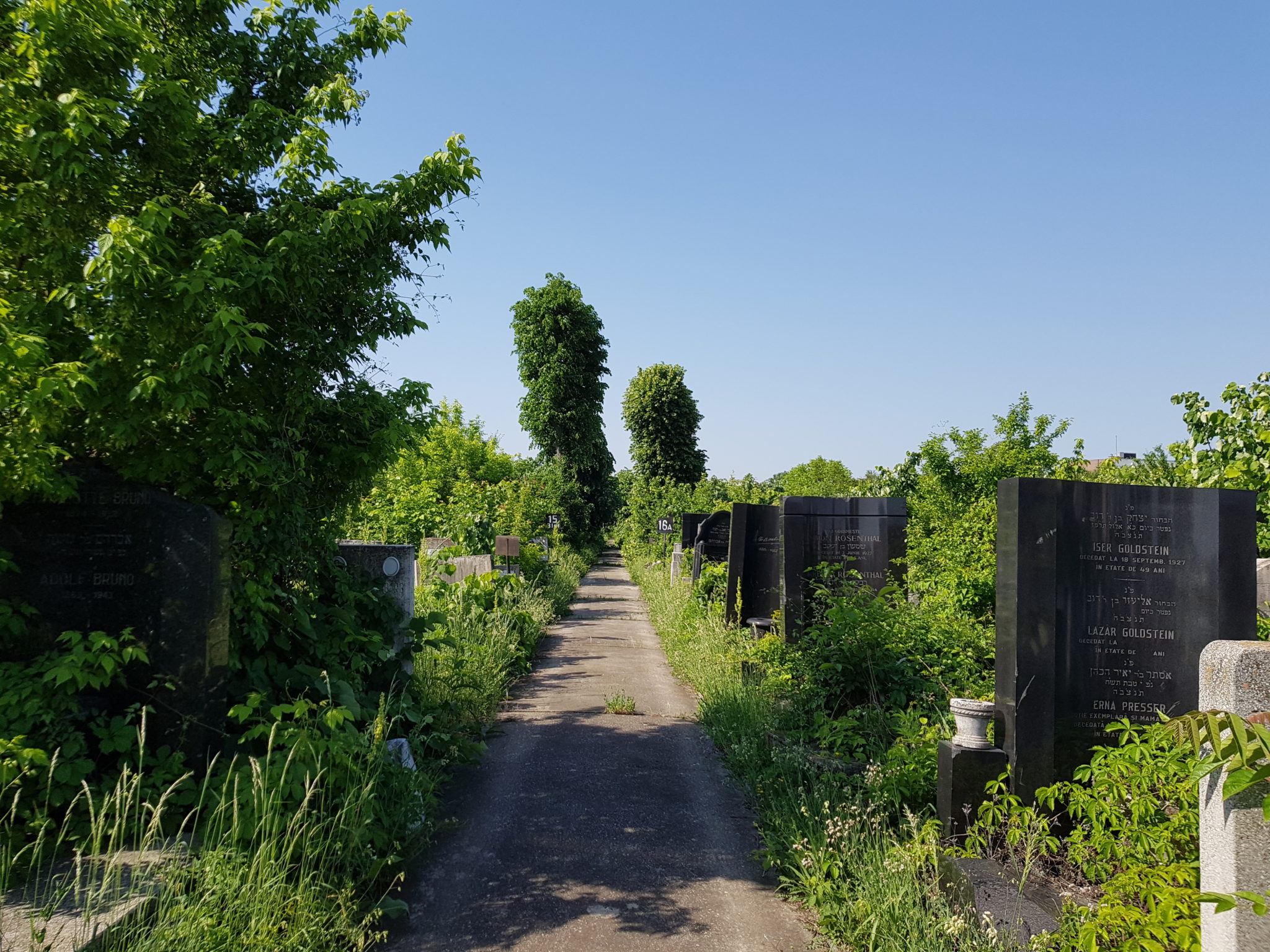 The further back, the older everything was and the alley narrowed 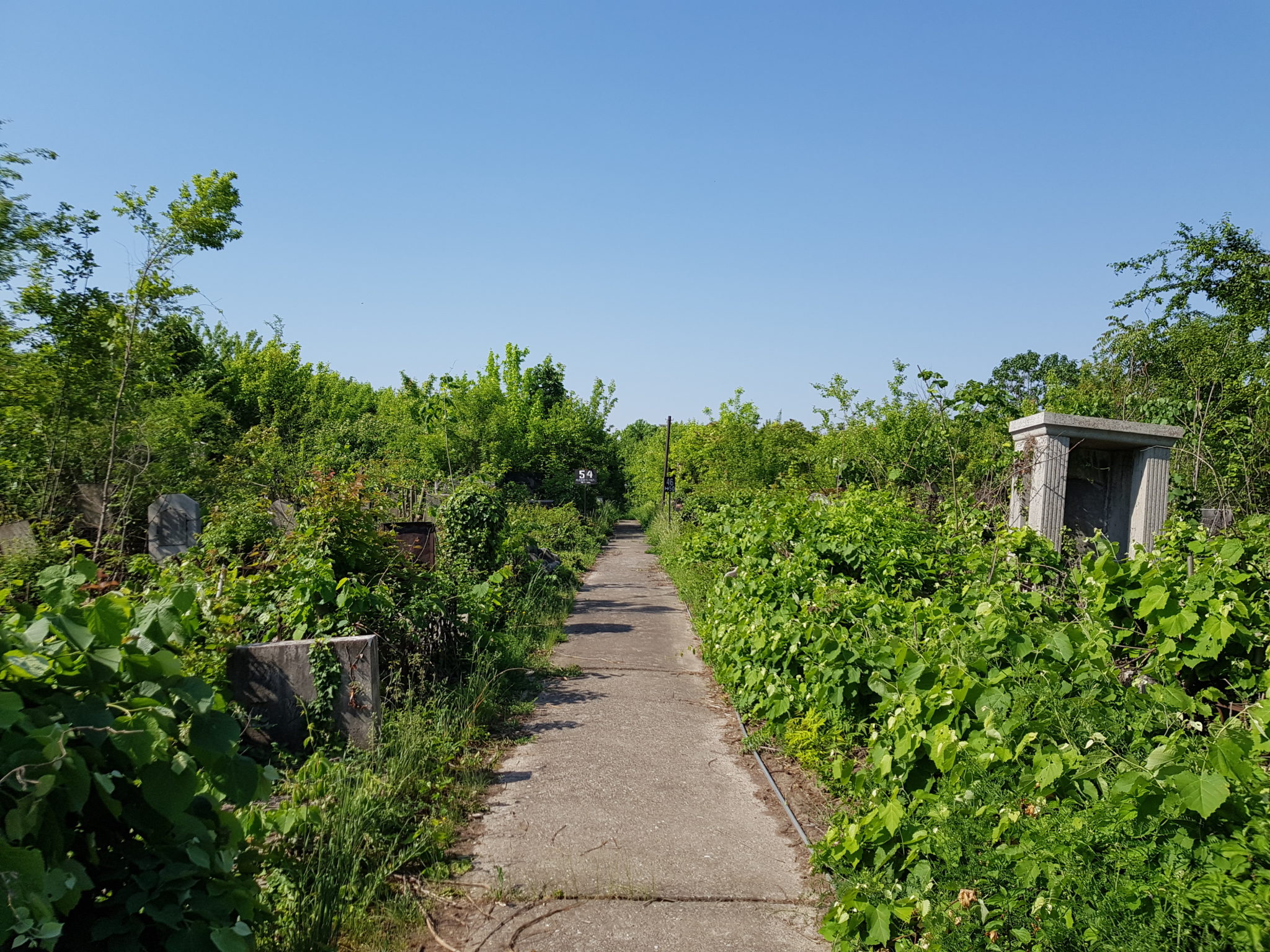 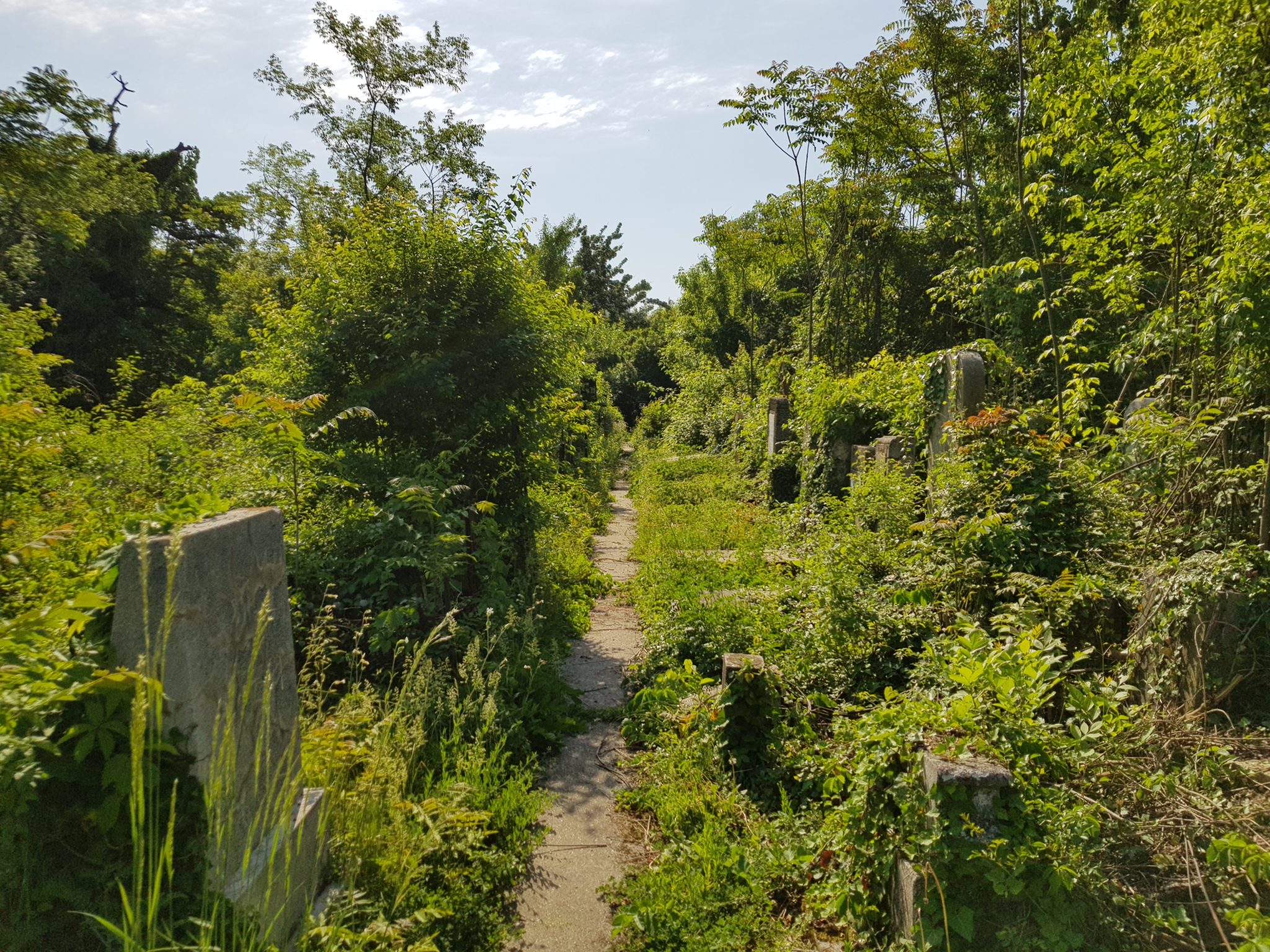 Here and there, there are small stone benches, usually with the name of the person who donated it. 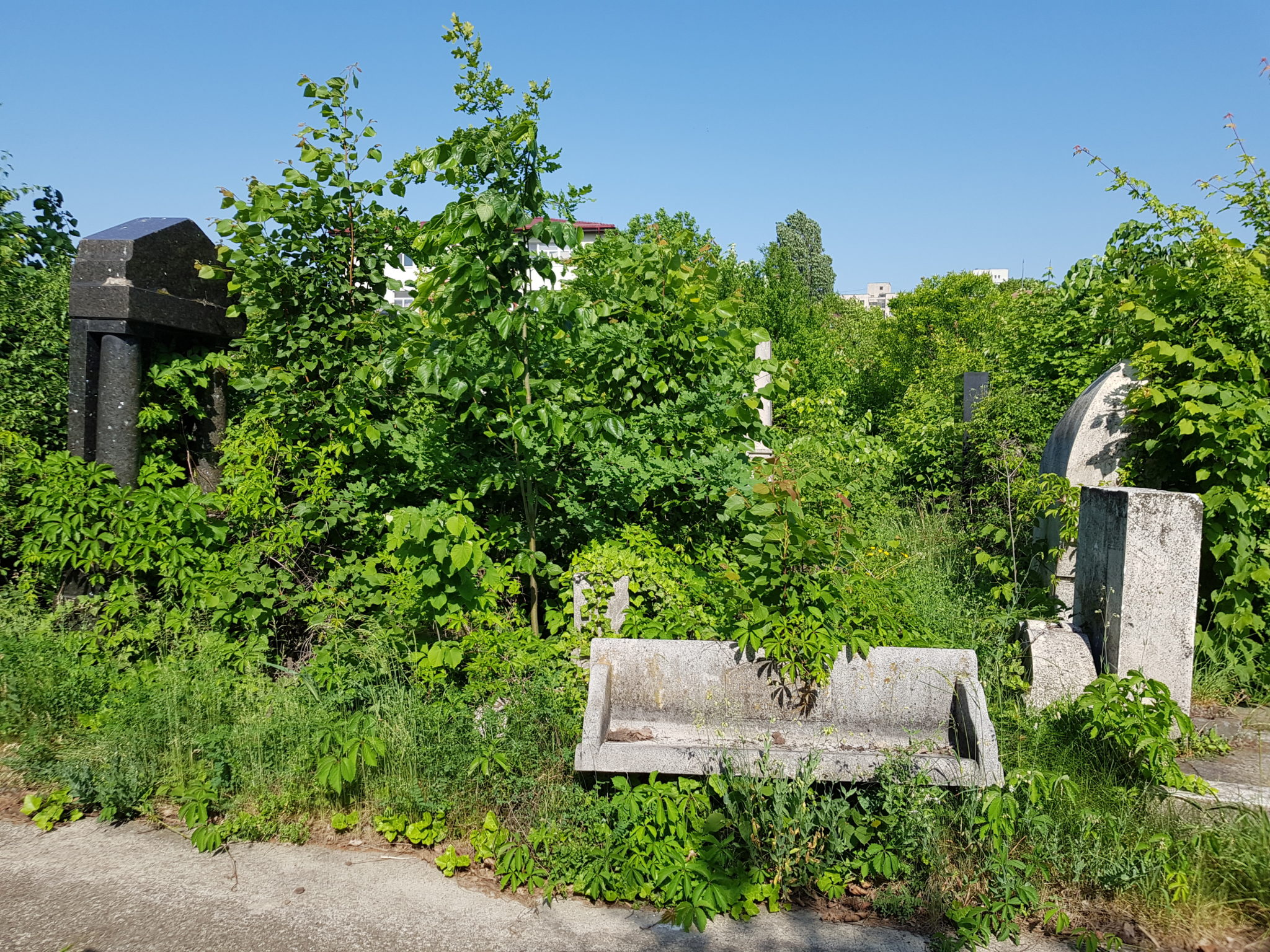 One thing I noticed, unlike orthodox graveyards, there were no real crypts or mausoleums build by rich families. There were some more elaborate graves, but mostly just had a grave stone. 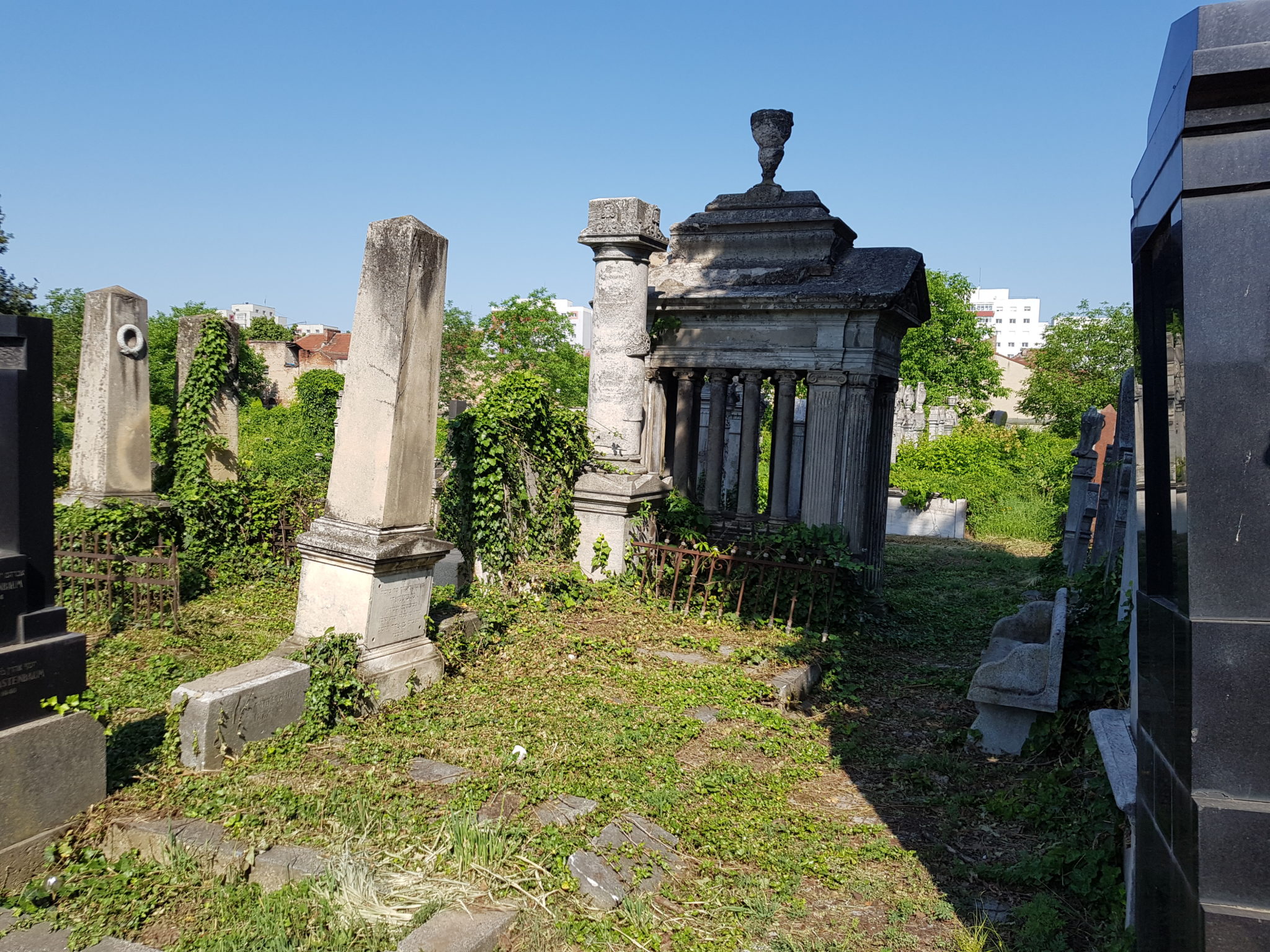 I noticed two kinds – simple stone and black marble or granite, the second ones having survived the passing of time much better. I saw no white marble or lightly colored granite. 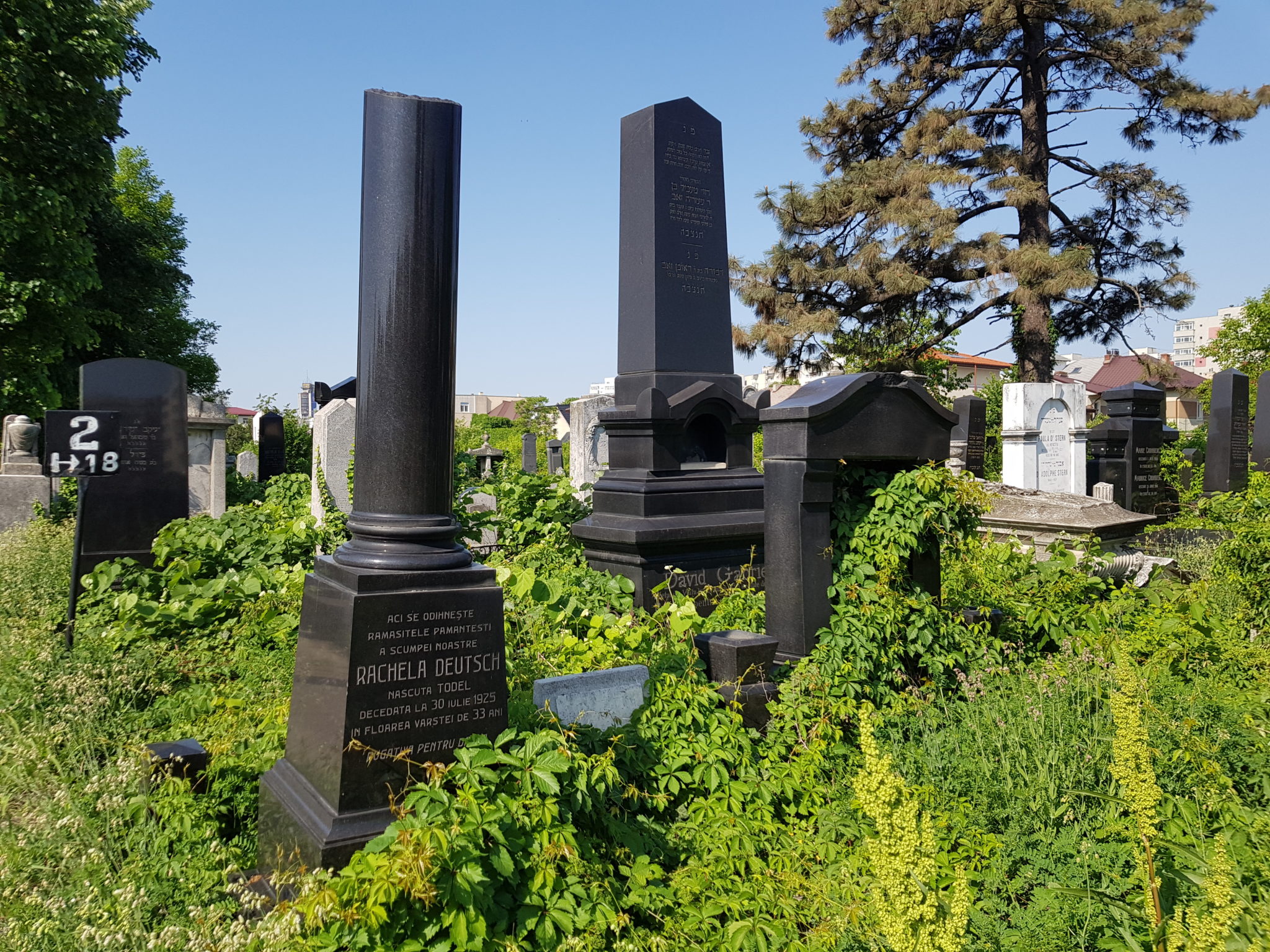 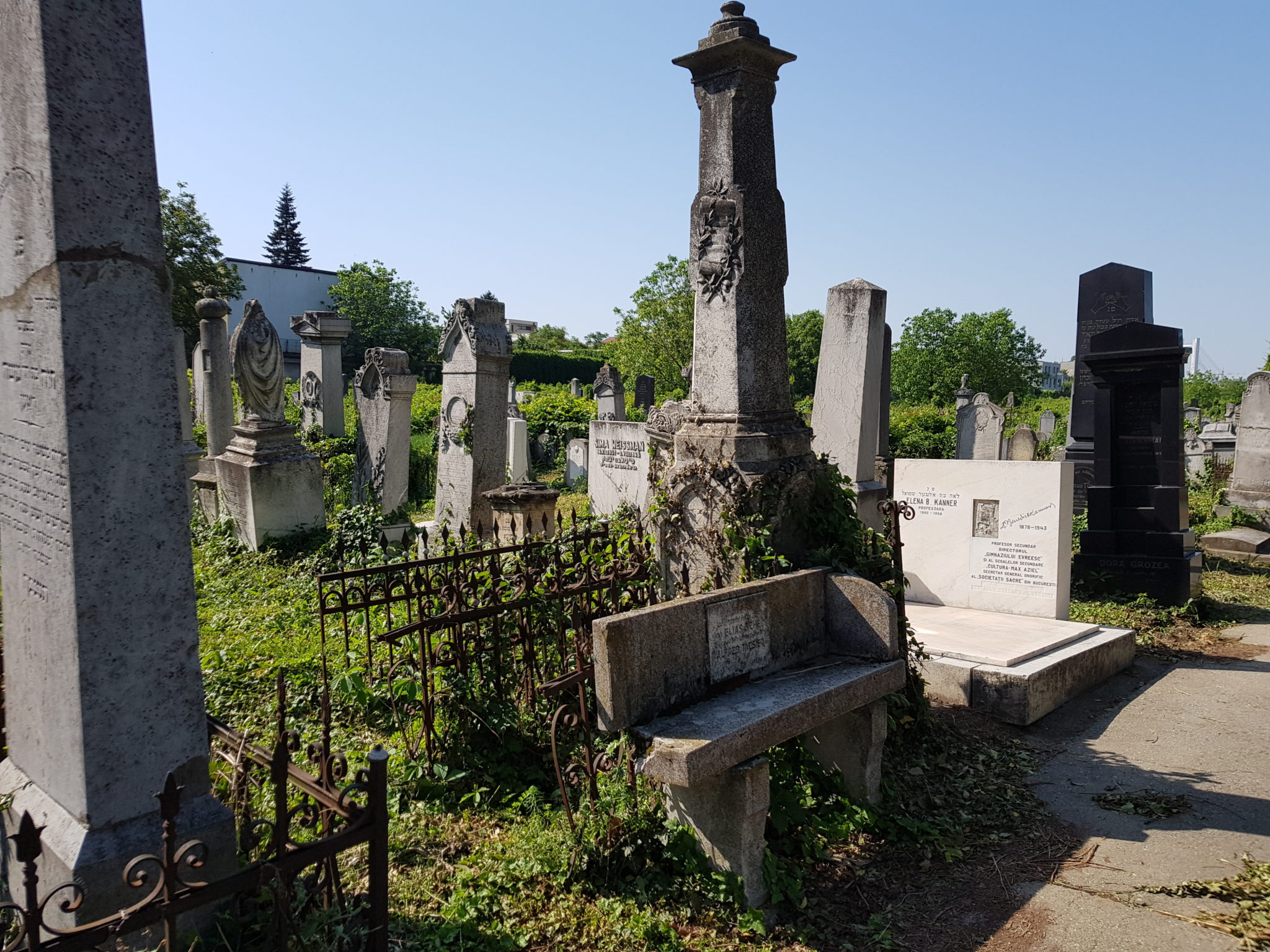 About half way down the alley, there is a monument to Jewish soldiers who died in the Romanian army in World War 1, 119 of which are buried in this cemetery. Until this monument the cemetery looked at least somewhat maintained. After this the wilderness started. The main alley was narrower and in poorer repair. 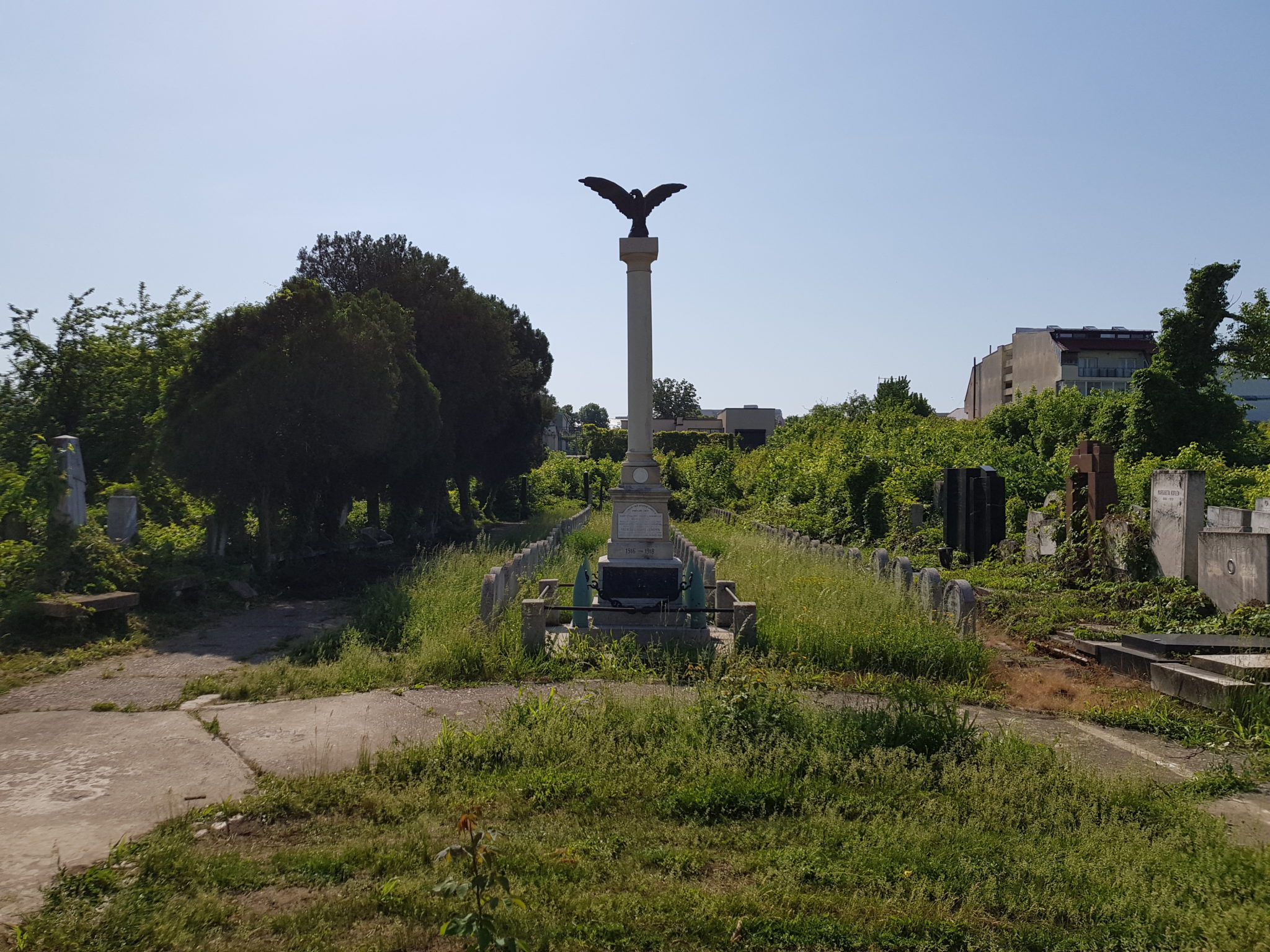 While the main alley still looks somewhat taken care of, on the sides of it the cemetery looks quite abandoned 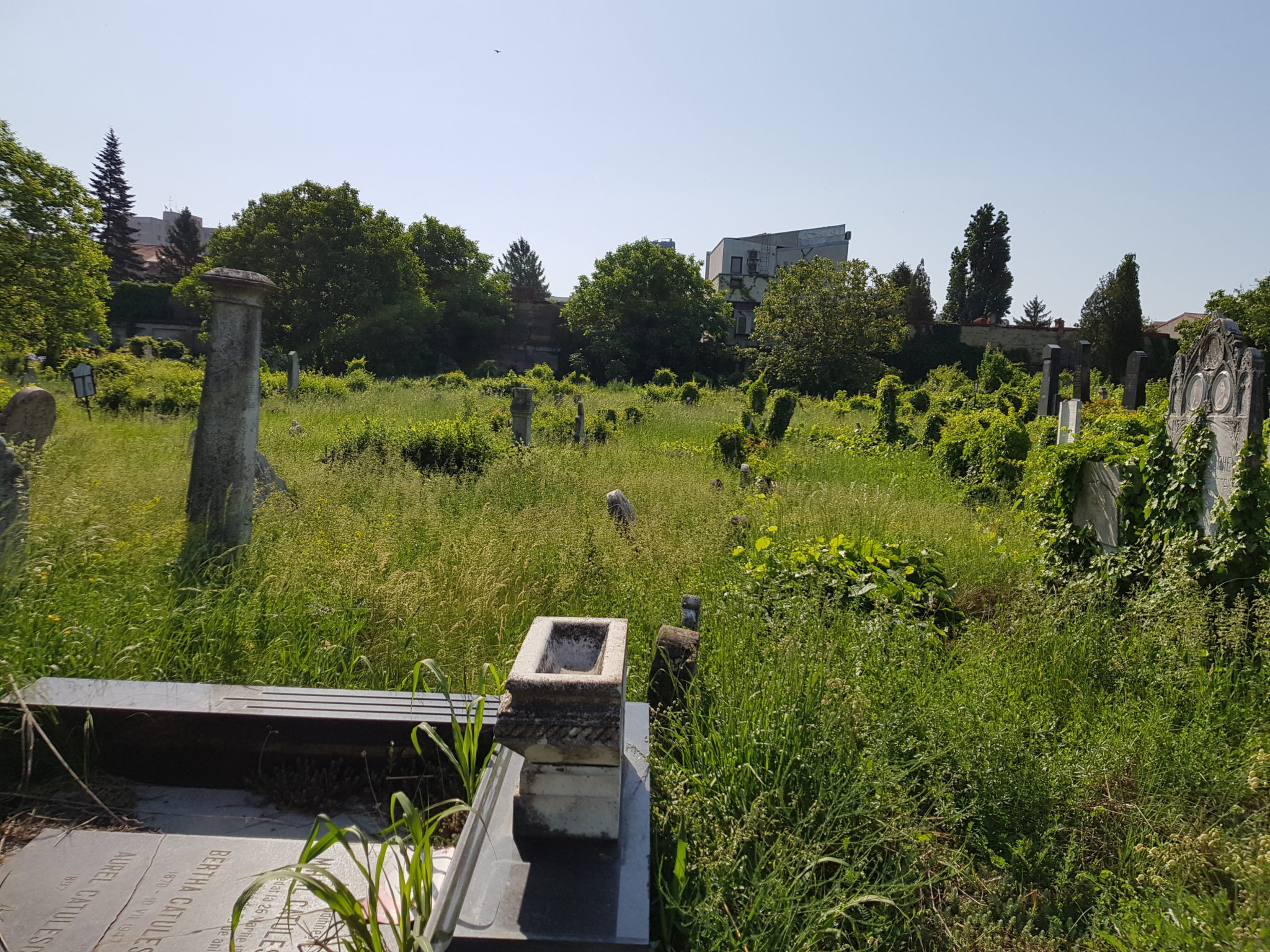 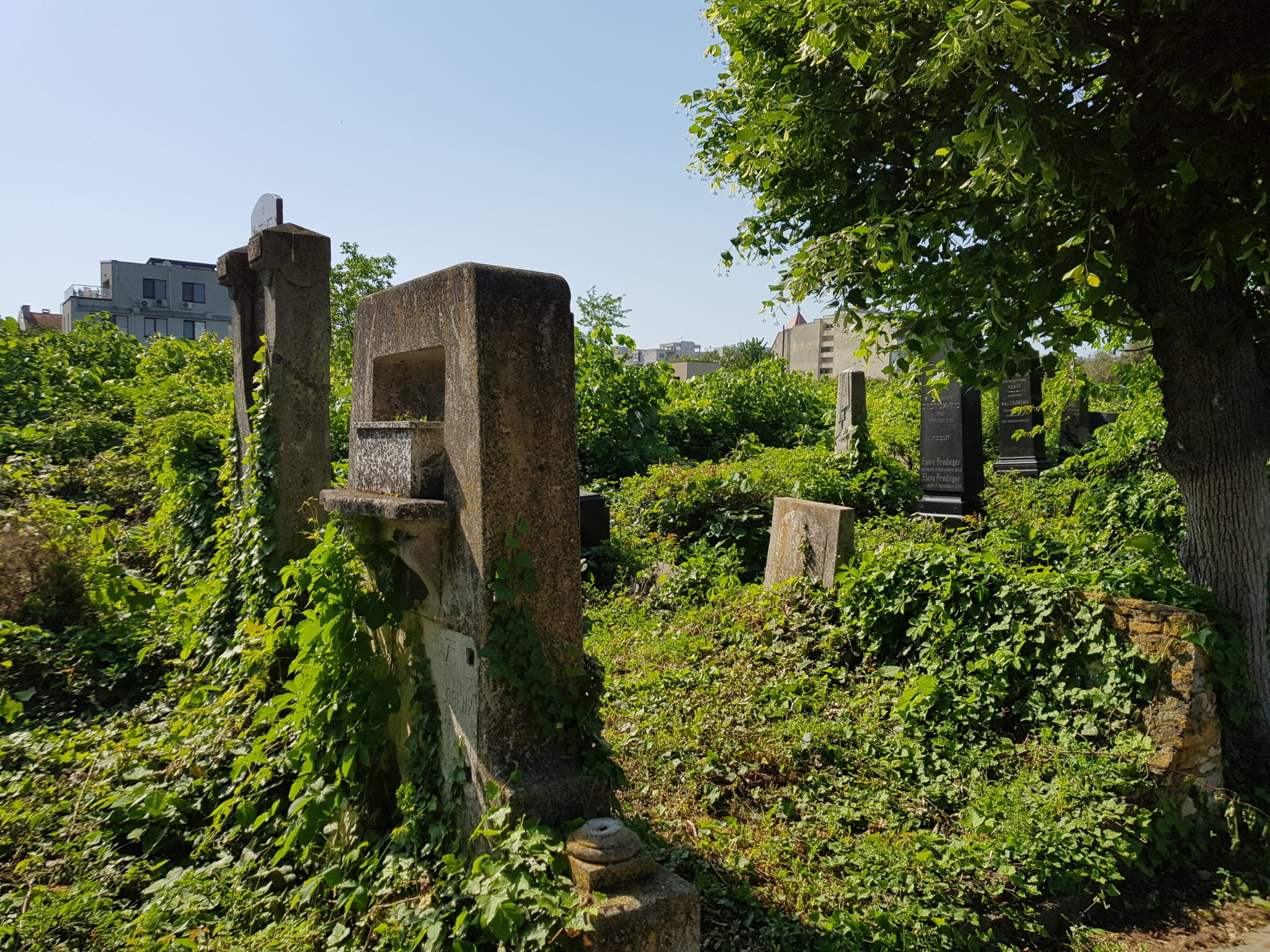 From the main alley there are, as expected, there are side paths. This were sometimes paved, but mostly not and often just look like a path in the forest. Some of the gravestones were completely lost in the vegetation. 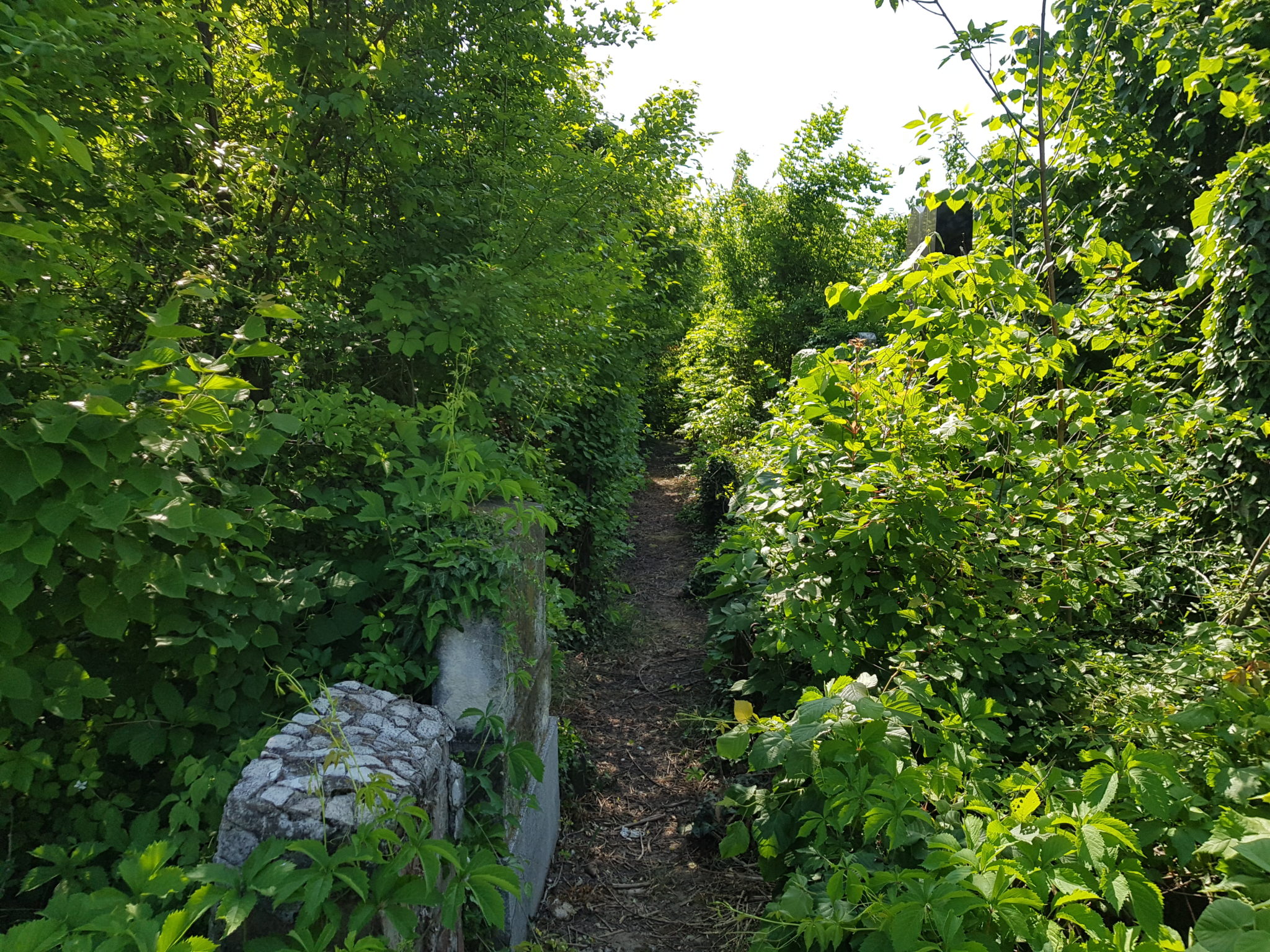 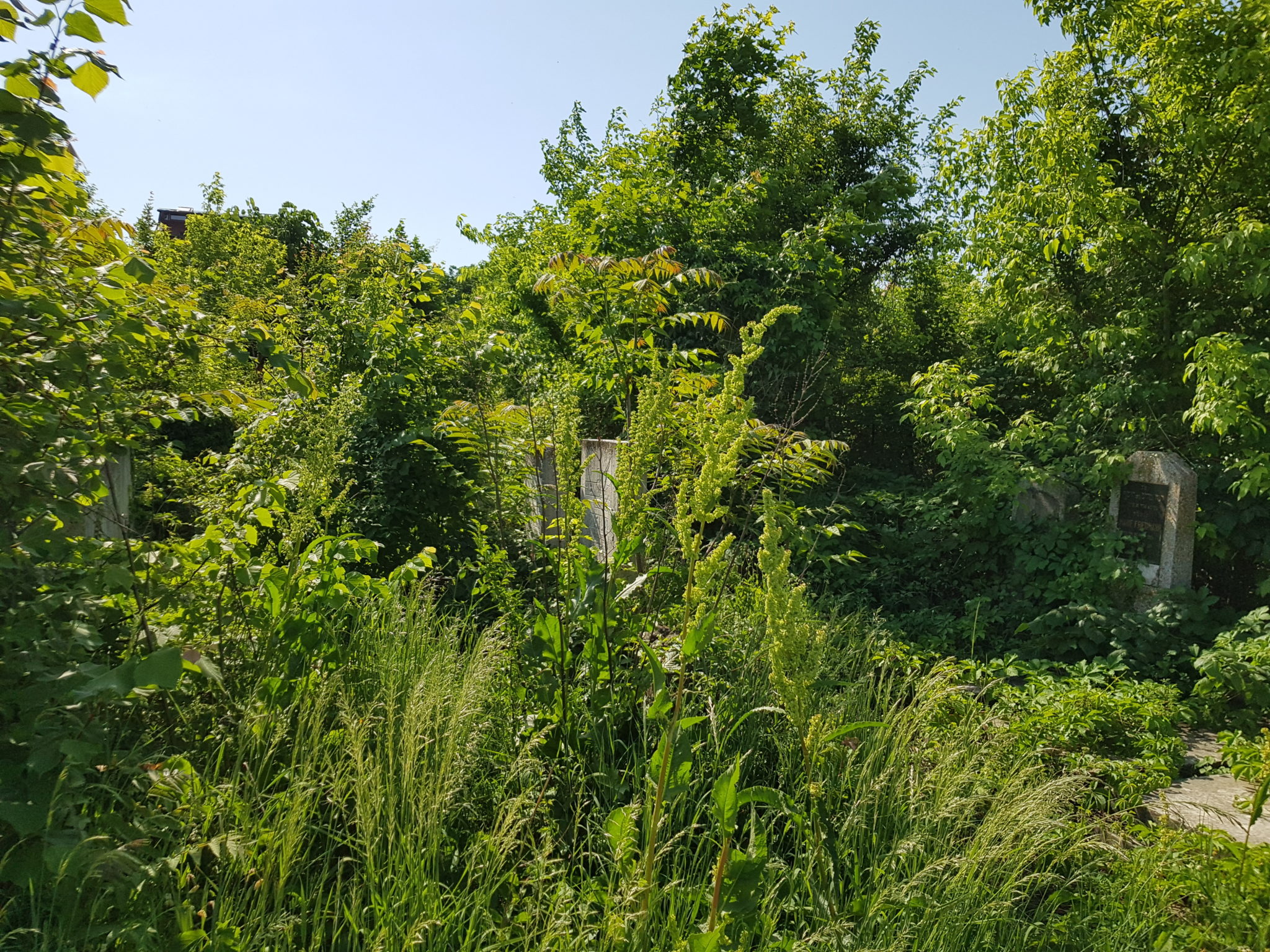 In the wooded area you can occasionally see really old stones lost in the thicket. 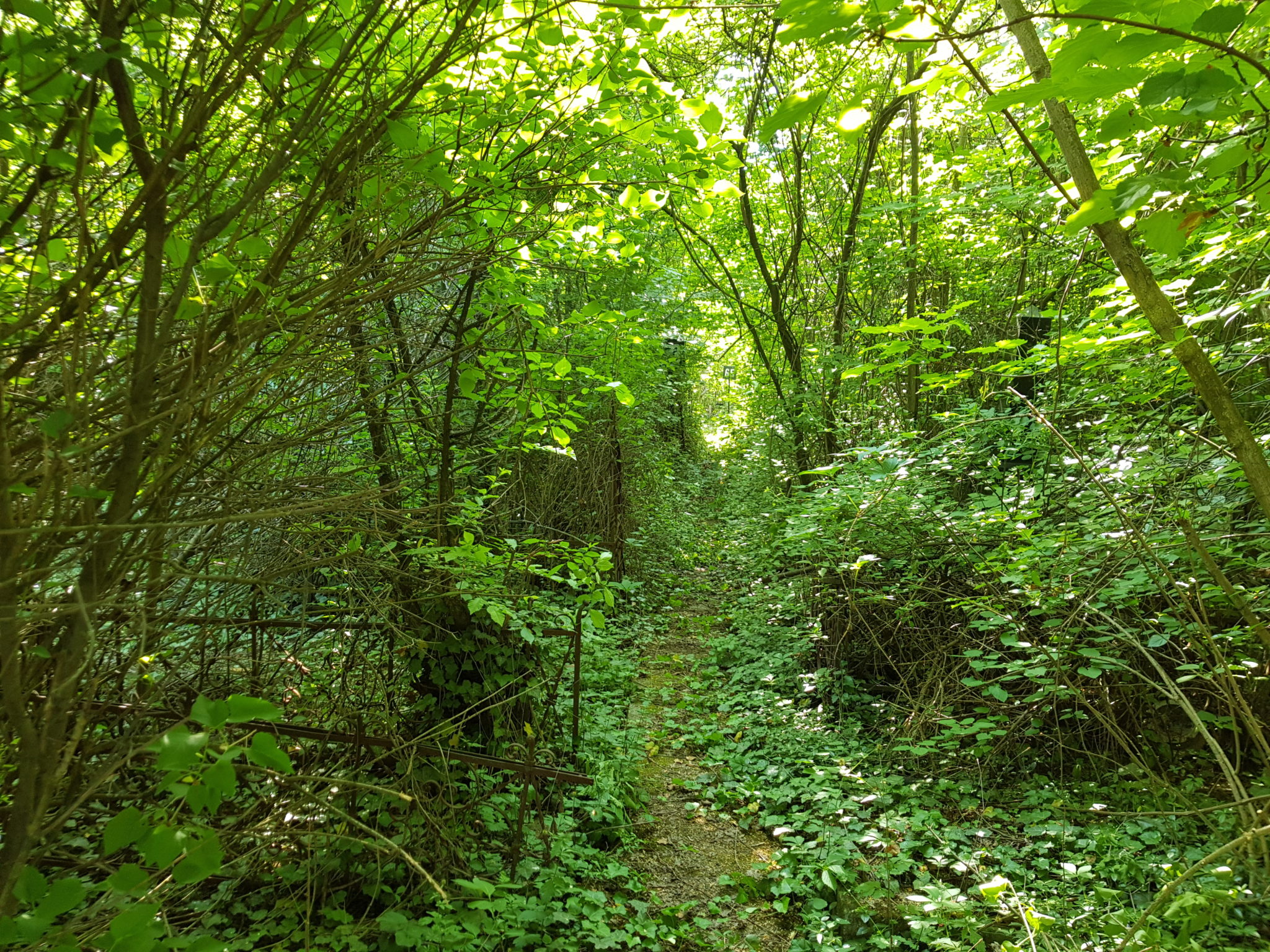 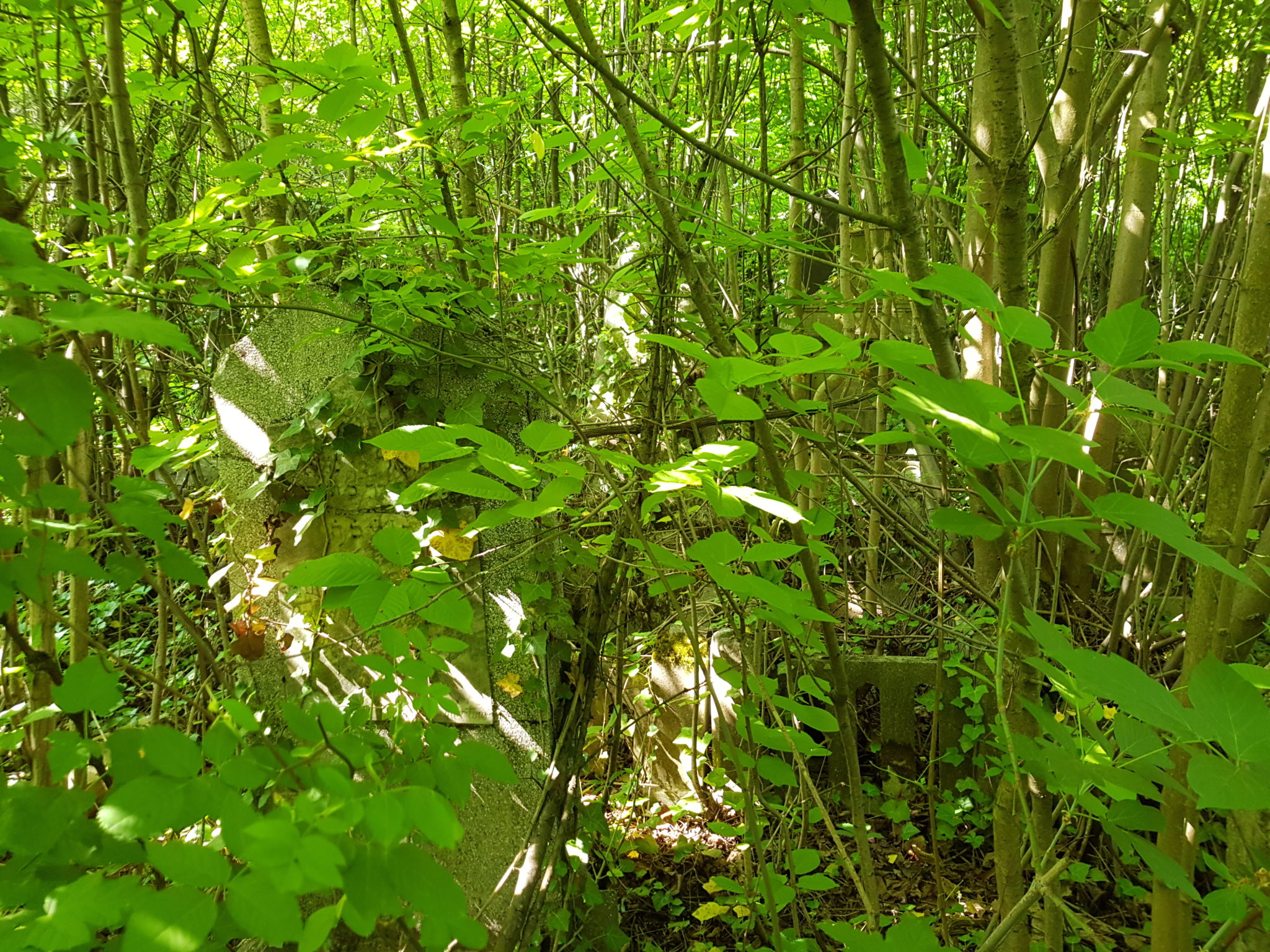 There is an area which I could not access, the vegetation was to thick. I was told that at the center there is a pond. Not originally there, but formed when the ground sank as a result of movements caused by the building of a subway line nearby. It dries durring summer, but in the autumn to spring period, part of the graves are underwater. I could not get a shot of this so just took a geneic picture of the area. 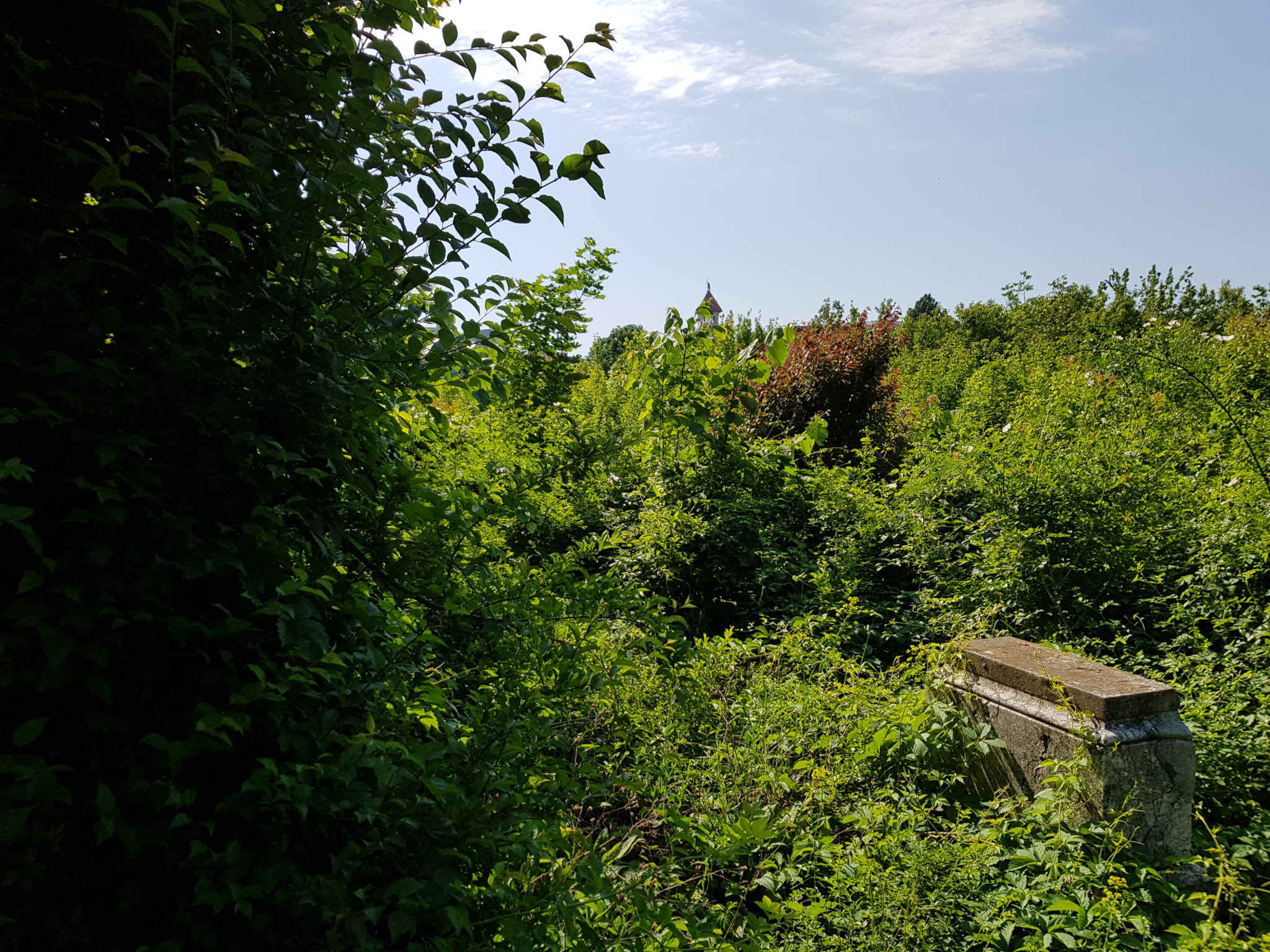 It is, all things considered, a very peaceful and contemplative place. Walking through it, you get to places where you almost cannot hear the traffic, something rare in Bucharest. And, unlike other graveyards in which there are always groups of people walking about, I was alone here and did not see another person besides the caretaker at the entrance. This may be a bit sad or not, depending how you look at it. The families of the people here probably moved on long ago, to the US or Israel or some other country and in a sense, many areas of the graveyard seem long forgotten. Time has moved on. It can be depressing or somewhat comforting, depending on how you look at it. So I will leave it at that, maybe with just a few more pictures. 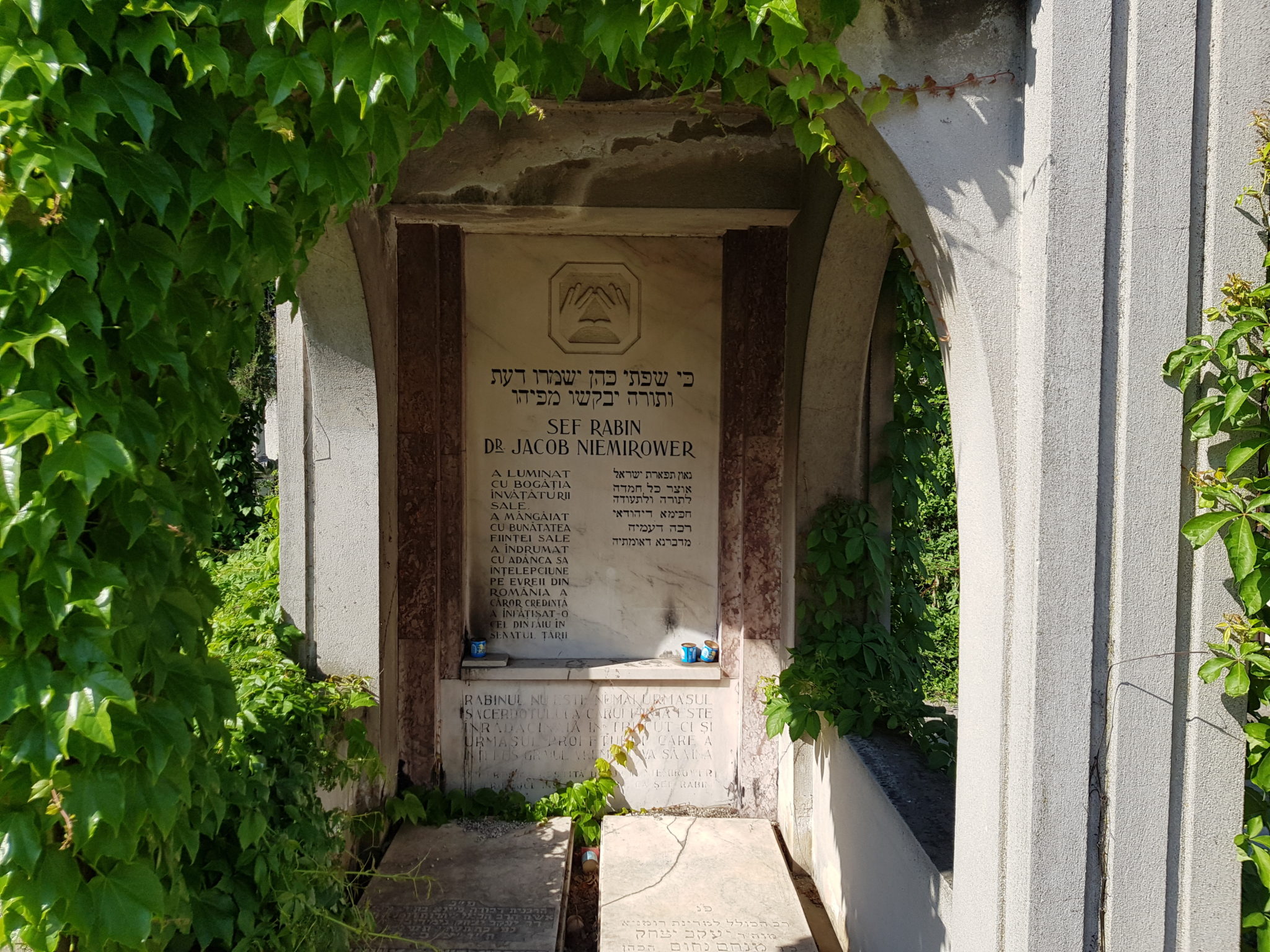 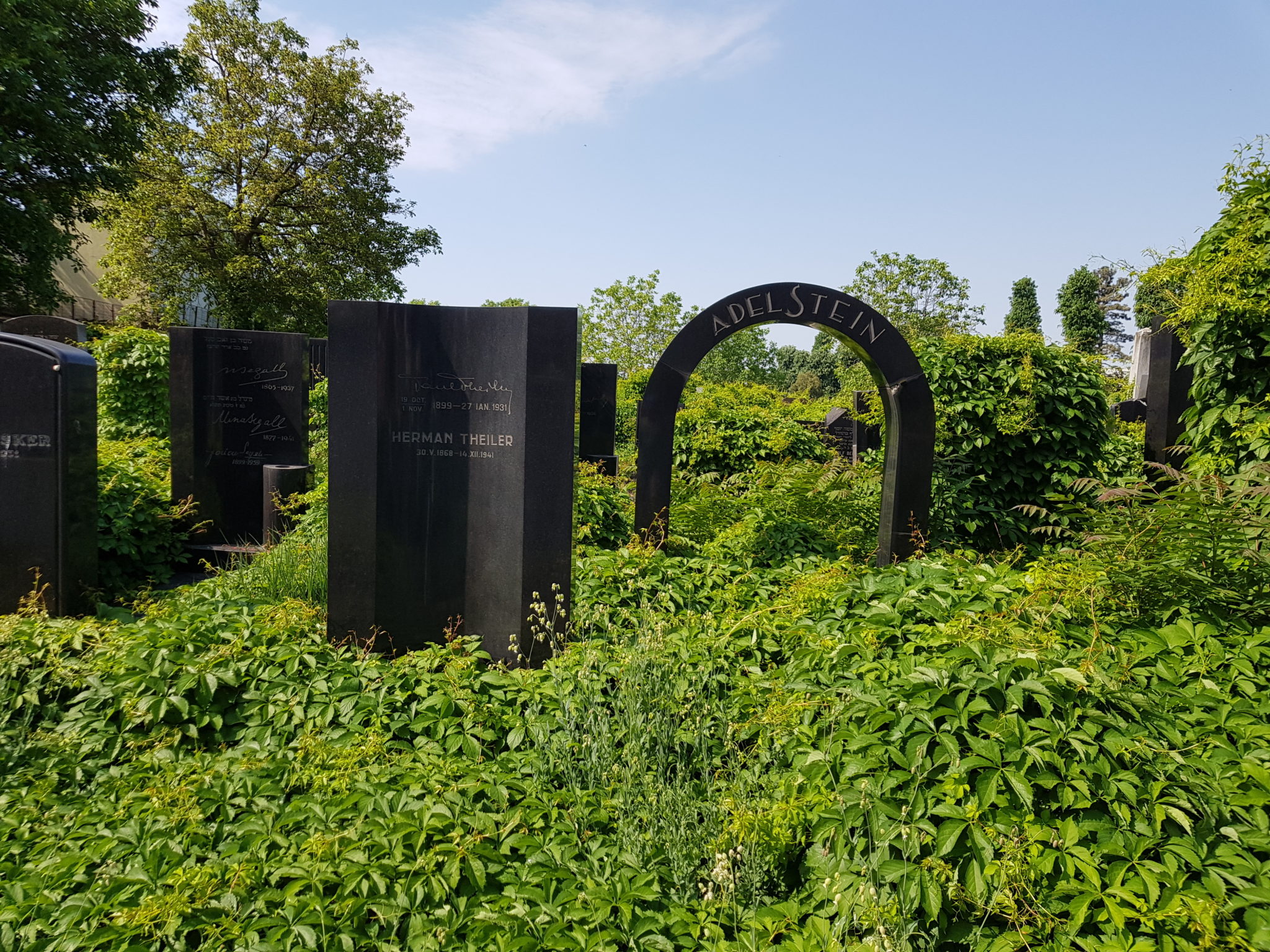 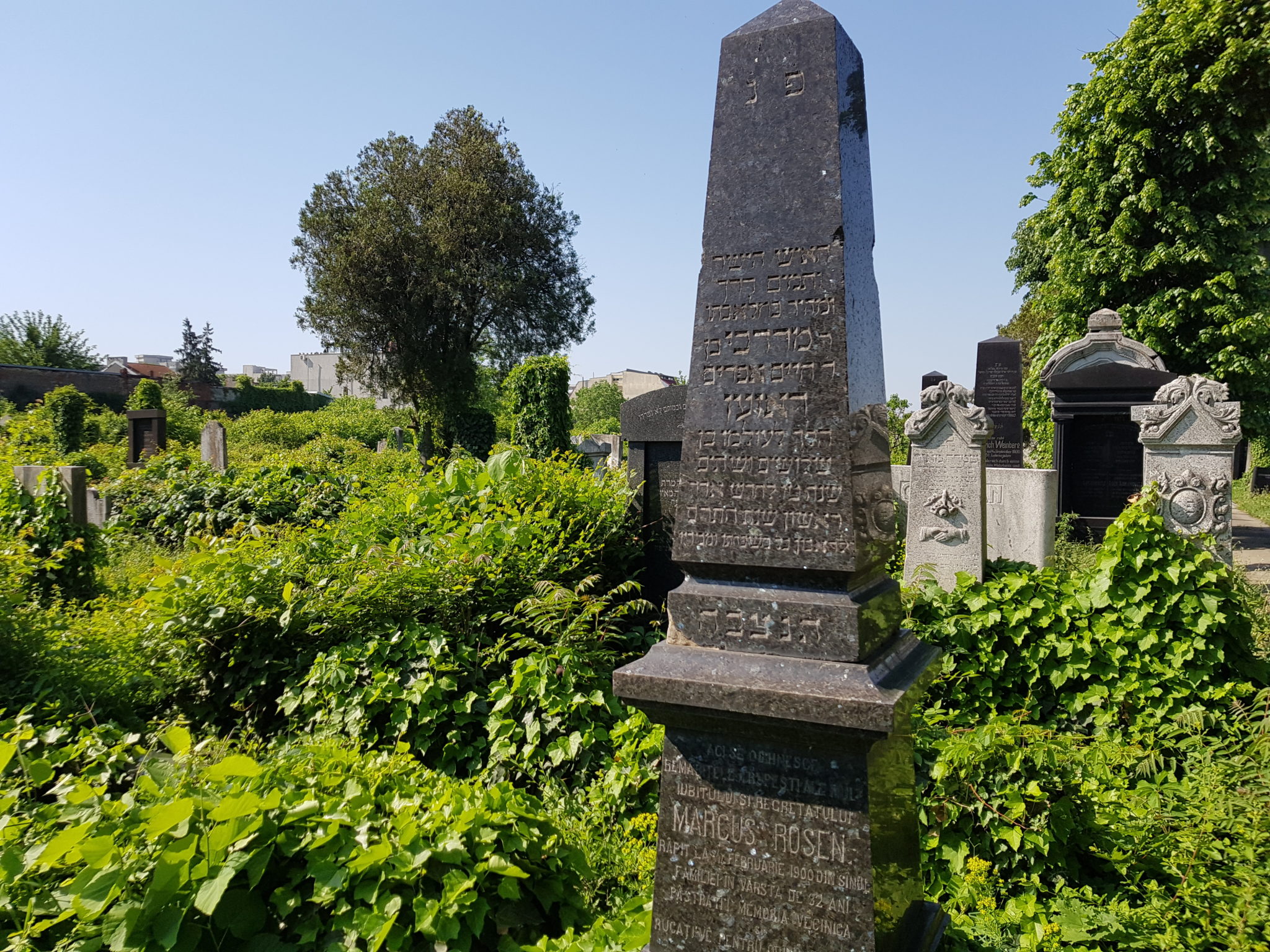 I hope everyone is enjoying the long weekend. And I want to say thank you to our veterans.  I know…