I just took my five hour I Can Haz Sekund Amendment Nao? class, and my typical “go fuck yourself” tendencies have been whipped up to a jiggly wiggly timey wimey ball of hate.

Now, any of the following things could be true:

But assuming the rage-hormones haven’t broken my brain, let me share my loathing of this state’s government with you.

If you don’t have a pistol license in NYS, you are not allowed to touch a pistol.  Not own, not carry, not buy or sell, touch.  Criminal offense if you do.

In order to get a license to touch a pistol, you must submit your paperwork for said license, including the receipt of the gun you have purchased.

Yes.  You must first buy a gun without ever having touched it.  That’s the way things work here.  Now of course, just because you bought it doesn’t give you any of the normal benefits of what we would normally think “ownership” implies.  Like, YOU CAN’T FUCKING TOUCH IT.  Or, I dunno, take it home mebbe?  You give the gun store some money, they give you a receipt (only).  You submit the receipt with your license paperwork to the judge and maybe someday you might actually own something that is a little more solid than a slip of paper (which, much like the Constitution in NYS, can be used for wiping one’s ass).

Now the class-givers were very happy to be teaching my group of people, as we live in a county with a “good” judge, 2A-wise.  Because you see, each county in NYS has a judge who determines whether or not people have their pistol licenses granted, and which version is granted.

Everything not permitted is forbidden 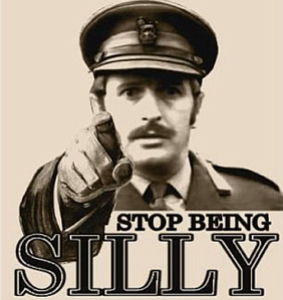 For you see, you’re not getting a license to carry a pistol; no no, that would be silly.  You are getting a license to carry a pistol for a particular purpose only.  And guess what?  Self-defense is a separate listed category not granted by the other permitted reasons.  My judge will pretty much automatically grant pistol licenses for the purposes of hunting and target shooting.  This means I can carry a gun to a gun range, from a gun range to my house, to a hunting location and from a hunting location to my house.  That’s it.  I can also use it only for target shooting and hunting.  So, if I am carrying it to a lawful destination and I am attacked by a crazed hobo, I may not use the pistol for self defense if I do not have a self-defense license.  I can roundhouse kick his face off, I can crush his skull with a rock, I can blow his head off with a shotgun, but if I use my target and hunting license pistol to stop him then I am guilty of unlawful use of a firearm.  I may not (may not, see below) be prosecuted for the dead hobo, but I will be prosecuted for the gun felony.

Ain’t nobody wants to see that *(euphemisms helpfully marked)

Now, open carry ist verboten in NYS.  Which means, you may not expose your gun* in public.  This includes printing it through a shirt or jacket — that’s a crime.   Once you’re inside the (private) gun range, you can take it out* and begin using your gun.*  This also applies to hunting on a piece of private land.  But what about on public lands?   No, you may not expose your gun*, you must keep it concealed at all times.  Yes.  That’s right.  According to the law, you can use a properly licensed pistol for hunting as long as you don’t take it out of your range bag/holster/etc.  Now the NYS game wardens apparently did not want to be the victim of accidental discharges so they have magnanimously agreed to not charge people so long as the hunters are a) dressed like hunters, b) are able to explain what kind of game they are hunting c) it is the season for said game and d) the pistol is appropriate for the type of game being hunted.  Unless they just feel like charging you that day, of course.

Now there is a pistol license that allows you to just (concealed) carry the damn thing, it’s called an “unrestricted” license.  One of the reason why my judge is considered one of the good ones is that after having has a specific-purpose license for a year, I can then apply for an unrestricted license.  There are more classes involved, and they’re not offered all that often, and there is a waiting list for them when they are offered, but if I get into one, my county’s judge has a habit of granting them.  Albany county’s judge apparently never approves unrestricted licenses.  Some of the counties where the Night’s Watch are located will grant the unrestricted license without having a year of the training wheel version.  Judges change.  There’s no guarantee that the next judge of Saratoga county will be any better than Albany.

It’s getting all Sondheim up in here

Remember way back when you “bought” a gun?  Well, if all goes well, in a few months you might be able to take it home, once you have all your paperwork in.  Well, “you” and “your” isn’t completely accurate.  When you go to Ye Olde Sheriff’s office with your petition, you include some envelopes addressed to four NYS residents of good character who have known you for at least year.  According to the trainers, this is not a rubber stamp thing.  There will be background checks run on them, and the judge will determine whether the relationship is adequate for them to provide “proper” character references.  The Westchester judge requires that one of these four must have known you for at least five years.  So if you’ve just moved here from out of state, I hope your pistol collection wasn’t too expensive.  Once the judge accepts your four, questionnaires are stuffed into the envelopes you provided (Huzzah for saving tax dollars!) and sent out.  Until those four people return those questionnaires, your application will not be processed any further.  If they are too late in returning them, the application is canceled.  If the judge doesn’t like what they read, the application is denied.  If the application is denied, you may not apply again until three years have passed since the denial.  You’ll need to go out of state for all your pistol-touching* needs.

It gets better.  Better, not good.

Once you do get a pistol license, you can now touch pistols.*  This will help make your second purchase a better one, since you’ll have some idea of ergonomics.  Once you purchase your next one, the gun store will give you another piece of paper.  “What?” you may be asking. “Don’t I have a license to carry a pistol home now?”  Hahahahahahano.  Well, technically yes.  You have a license to (concealed) carry A pistol.  A single very specific pistol.  Not “your” new one. This also works in reverse. Your pistol can only be carried by the licensee (i.e. you).  You can’t lend out a gun.  Another pistol-licensed individual can touch it* and they can use it for purposes for which their pistol license is valid, but they have to do so while under your direct supervision.  The good part is that you can amend your pistol license to also include “your” new pistol.  You won’t need any additional judge’s approvals or character references, just some signed and notarized forms.  It still will take a few weeks to process.

This has all been about pistols.  Long guns are much less regulated…  unless you get a pistol license.  Because once you’ve deigned to ask to exercise your rights, the government now has carte blanche to fuck you over.  There are vast [dammit, why can’t I find that scene from David Lynch’s Dune where Duncan Idaho says “vast numbers.  VAST.”] numbers of ways that you can violate the terms of your pistol license.  I believe they’re all crimes. Most of them are misdemeanors with no/little chance of jail time, but they are still crimes.  Which means you immediately become a gun criminal.   And gun criminals aren’t allowed to own any guns, even guns not requiring any special permission (even in NYS) to own.  It’s kind of ingenious in a Kafka/Ayn Rand villain sort of way:  make it so those people that want to own guns are more likely to violate rules.  Make the rules carry little or no penalties to keep from generating sympathetic victims but then also use it to disarm them.  Ta da!  You’re disarming people who want guns without restricting the rights of those who don’t want to exercise those rights; as far as the gun-apathetic are concerned, no violation has taken place.  Brilliant!  Though not as brilliant as my idea of opening a hipster pop-up restaurant selling heated Red Baron frozen pizzas for $35.

And one last “Fuck You”

All his ranting has been concerning the laws of New York State.  But the title just said “New York.”  Why?  Well, one of the laws pertaining to gaining a New York State Pistol License is… It is not valid in the five boroughs of NYC. 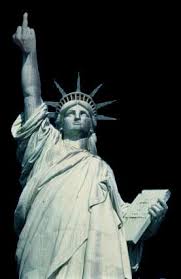 I wanted to find someone flipping off the NYC skyline, or the Empire State Building. This is the best I could do