Rifles for the West

Bolt guns kind of own the outdoor rifle scene west of the Mississippi.  Here in Colorado during the general rifle deer/elk seasons, probably 75-80% of the rifles you see are bolt guns.  So, let’s look at those first, then we’ll come around to some other options.  And there are other options; here’s a teaser, “Browning Automatic Rifle” doesn’t always refer to the WW2-era squad automatic rifle.

So, why bolt guns?  They are simple, strong and accurate.  Bolt guns will easily accommodate the most powerful hunting cartridges.  Their stiffness and solid lockup increases accuracy, a key consideration in the West’s open country where 200 to 300-yard shots are not unusual.  They are easy to maintain, easy to field-strip, easy to clean and easy to use. 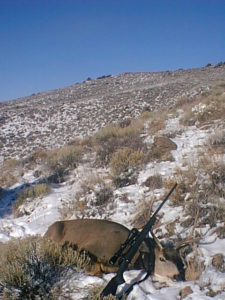 Bolt guns are also handy in that they have one feature shared by few other action types, save single-shots:  You can remove the bolt without tools and access the entire length of the barrel.  That’s handy for clearing blockages or just running an oiled patch through the barrel after a day out in rain or snow.

There are too many bolt rifles for sale today to go into brands, but there are a few things to think about when looking for a good bolt gun:

If bolt guns aren’t your cup of tea, there are other options.

Semi-autos are very popular these days and have probably surpassed single-shots in the Western game field scene.  Bear in mind that most, if not all states limit you to five rounds or less in any rifle used to take big game; that’s rarely an issue in bolt guns but sure can be in a semi-auto.  The AR platform can handle some rounds suitable for deer-sized game, while the AR-10 and guns like the old Winchester 100 and the various Remington semis can handle .308- and .30-06-level rounds.  If you want more oomph, look into the Browning Automatic Rifle, a gas-operated powerhouse in chamberings up to the .338 Winchester Magnum.

Single-shots are still popular.  While older designs like the Springfield are weak by today’s standards and require light loads, modern singles like the Ruger #1 and the new-manufacture Browning Hi-Wall are bank-vault tough and can handle any rounds you choose to feed them.

Singles have another advantage:  If you are on a tight budget, some singles like the New England Firearms break-tops are very easy on the bankbook and can be had in a wide variety of calibers.  If your budget is really tight, you can even have a shotgun and rifle in one go with the simple expedient of purchasing additional barrels.

Finally, there is the classic Western rifle:  The lever gun.  While most lever guns are 200-yard propositions for deer-sized game, there are a couple of notable exceptions.  The Savage 99 can be had in the .300 Savage and the .308 Winchester, which lends some more power to a platform traditionally used for cartridges like the .30-30.  And there is the fine old Browning Lever Rifle (BLR) which feeds from a box magazine, handles cartridges up to the .300 Winchester Magnum and has a rotating bolt head with bolt-action-style locking lugs at the front of the bolt; the BLR has been described as a bolt gun where the bolt is operated by a lever, and that’s a pretty good description.

No matter what rifle you choose, there’s another key decision to be made as well, which brings us to…

In recent years it seems like we’ve seen an explosion (pun intended) of new rifle cartridges.  Some of these are commercial adoptions of popular wildcat rounds, some are purposely developed by gun and/or ammunition manufacturers.   I’m not immune to the wildcatting bug myself; I’ve long thought of having my favorite .30-06 rechambered to the .30-06 Ackley Improved, which gives .300 H&H Magnum ballistics while still allowing use of regular .30-06 factory loads.

For the most part, though, I’m a practical kind of guy, and most of my rifles are hunting rifles.  While plenty of folks love to play with custom calibers or line up to buy the first examples of the latest Eargesplitten Loudenboomer Magnum, I’m pretty content to stick with cartridges that have been around a while.

Most of these cartridges are readily available in any large gun or sporting-goods store; hell, you can buy many of them in Wal-Mart, at least some kind of ammo to get you shooting.  But when it comes to availability of ammo, you still can’t really beat the old .30-06 Springfield.  The ’06 may be 112 years old, but it’s still one of the best big-game rounds going; if I know someone interested in learning the ins and outs of hunting and shooting who wants to buy a single rifle for North American big game, they would be well-advised to buy a .30-06.  It will easily handle anything from antelope to moose, although it may be a bit on the light side for big Alaskan bears and the largest bull Alaska-Yukon moose.  But the ’06 has a huge advantage for those packing one gun across long distances, perhaps in airline checked baggage:  If you lose your ammo supply somewhere en route, you can walk into almost any gas station, bait shop, or general store (there are still some around) and buy at least some kind of ammo that you can re-zero and get to work with.

The only other rifle cartridge that you can say that about it perhaps the old .30 WCF (.30-30, for those not familiar with the original name) and the trienta-trienta is popular enough from the Yukon to the Canal Zone, but not quite up to game like elk or moose.  It’s strictly a 150-200-yard cartridge for deer-sized game.

I reckon the .30-06 will be around at least as long as I am.  Rifle and cartridge design hasn’t changed all that much, overtly, in the last 100 years; most modern bolt-action rifles are adaptations of the 1898 Mauser, and scores of cartridges, wildcat and otherwise, are still based on the .30-06 case.  What has advanced in the shooting world is metallurgy, ammunition propellants and projectiles, and optics.  But a good case design is a good case design, which is why the .30-06 remains one old dog that’s learned lots of new tricks.

But, with that said:  I have one principle when it comes to hunting rifles:  You can shoot little stuff with a big gun, but you can’t shoot big stuff with a little gun.  That’s why I generally go afield with a .338 Winchester Magnum.

Shooting legend Elmer Keith was also a fan of the big .33 caliber for big game, although he favored the wildcat .333 OKH, named for its designers Charles O’Neil, Don Hopkins, and the aforementioned Elmer Keith.  The OKH was a .30-06 round opened up to take .333 caliber bullets.  This wildcat round saw some use in western game fields alongside the similar .35 Whelen (the .30-06 case necked up to .35 caliber) until 1958, when Winchester released the more powerful .338 Winchester Magnum.

If I were to own only one rifle, it would be a .338 Winchester Magnum bolt gun wearing a 2-7X or 3-9X scope and a good stout leather shooting sling.  With that, you can easily kill any big game animal in North America while not messing up a 120-pound meat deer too much.  But that’s a qualified recommendation; I’m tall, big-framed, and not very recoil-sensitive.

Some folks are just the opposite.  Mrs. Animal is small, tiny-framed (4’11”) and, due to chronic pain issues, much more recoil-sensitive.  Her primary hunting rifle is a Ruger 77 MkII Compact in the rather interesting little .260 Remington, a good round for deer-size game, but one that will handle elk with good controlled-expansion bullets and careful shot placement.

If you’re recoil-conscious and bigger game is on the menu, there are some excellent old standbys, including the .270 Winchester, the .280 Remington and the .30-06.  Short-action rounds like the .308 have been wildly successful as well, partly because they work.  The old 7x57mm Mauser has killed big game all over the world – “Karamojo” Bell famously killed a lot of African elephants with it, a feat I wouldn’t want to attempt.  Some years back I found an old 1891 Argentine Mauser action wearing a 7x57mm barrel; I put a butterknife bolt handle and a Redfield peep on it, stocked it with a nice slim English walnut stock.  It was a neat little rifle, light, handy and shootable.  I fed it mild handloads and killed a few deer and one javelina with it.

Of course, there’s more to recoil than the cartridge.  My .338 is manageable in part because it weighs close to ten pounds loaded, has a nice thick butt pad and is Mag-Na-Ported.  The worst-kicking rifle I ever owned was a small-ring 98 Mauser with a slick little European-style stalker stock in black walnut, with an 18” light sporter barrel in .308 and a 1.5-5x scope.  It weight about six and a half pounds loaded and was a joy to carry but kicked like a bad-tempered mule.

Here’s a basic observation:  Most people over-scope their hunting rifles.  My favorite example is a guy I chatted with up in Routt County one year who had a 4-12 power, adjustable objective scope on a Marlin 336 .30-30.  Scoping the ChiCom SKS is another fad of recent days, which seems like it’s pretty much the definition of polishing a turd.

Most folks, for most hunting, can do very well with a 4X fixed-power scope or a 2-7X or 3x9X variable.  You’ll find that in most shooting with variables you’ll keep the scope dialed to the lower end of the range, as target acquisition is a lot quicker with lower magnification. 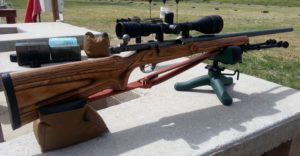 If you’re setting up a rifle for plains deer or antelope, you might want more scope; I have one like that, a Ruger 77 Mk II Target with a 6-18X scope.  But that’s a specialized rifle for reaching out and touching speed-goats in open country; it’s not something you want to carry around all day.  The damn thing weighs almost twelve pounds with scope, bipod, sling and a load of .243 rounds.

Whatever scope you buy, don’t skimp, but you don’t have to take out a second mortgage.  Redfield, Weaver, Simmons and Burris all make reasonably priced good, solid scopes in a wide range of sizes and powers.  It’s not out of line to spend as much on your optics as you’ve spent on your rifle, but you can get a decent scope for less than that if you shop around.

Find a good rifle that you can handle, that you can shoot well, and practice, practice, practice.  Get off the range and shoot in the field, from improvised rests and off-hand.  Learn how to shoot in the field and you can hit anything, anywhere.  Make sure your cartridge/bullet combination is appropriate to the game you’re after; I would not recommend taking on an Alaska grizzly with a .243, for example.

A good hunting rifle should last a couple of lifetimes.  Consider it an investment, one that can be passed on to the next generation and choose accordingly.  You won’t regret it.

Ultrarunning: A fucked up sport for fucked up people