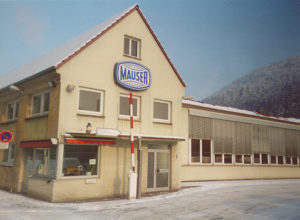 The fame of the 98 Mauser action comes not only from its utility in military applications – where in its many incarnations it is without peer among military bolt guns – but also in its ability to cross over into being a basis for a fine custom sporting rifle.  Some of the greatest works of art in steel and wood to come out of the shops of fine rifle artisans are based on Mauser actions, with the 98 being the frontrunner.

There are, however, a number of cautions and important considerations to take into account when gunsmithing the Mauser action.

One of the most important safety notes involves the pre-98 actions.  Since this is a forum primarily for the 98, the pre-98s are somewhat off-topic, but the following safety tip is crucial:  Pre-98 actions, including the 91 Argentine, 93-95 Spanish, and 94-96 Swede actions, lack sufficient strength to be rebarreled for most modern sporting calibers.  These actions should only be rebarreled for cartridges developing a chamber pressure of 40.000 psi or less.  The difference between these actions and the 98 series is not metallurgical so much as structural – an excellent illustration and text can be found in Kuhnhausen’s Shop Manual for the Mauser[i].  It is best to stick with the cartridges for which these arms were originally chambered.

The 98 actions, in all their variations, are a somewhat different and more complicated story.

There are several different variations of the basic Model 98 action design; these can be loosely lumped into three categories.  These are the large ring standard 98, which the GEW98 and k98k actions are included in; the small ring 98 actions, to include the German 98az, G33/40, and the M1910 Mexican rifles; and the large ring “intermediate” actions, typified by the Yugo vz24.  Of course, thousands of minor variations exist, and addressing all those variations would be impossible in the space allowable here, so let’s stick to the standard large ring 98s, including the WWII German 98k actions.  For a complete description of every make, model and variation, I recommend picking up a copy of Ludwig Olson’s “Mauser Bolt Rifles,” pretty much the Bible for Mauser fans. 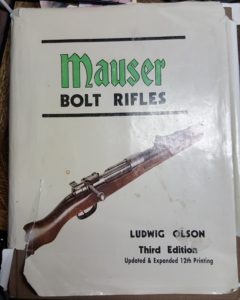 The Bible for Mauser nuts.

The 98k is, as mentioned previously, a standard large ring 98 action, (although some 98k pattern rifles were converted from small ring 98az carbines[ii]) and as such is one of the more versatile for customization.  Other common examples of the standard large ring 98 include the WWI GEW98, the 1908 Brazilian contract, built by Deutsche Waffen und Munitionsfabriken (DWM); the 1909 Argentine, also built by DWM; and the M1912 Mexican, built by Waffenfabrik Steyr.

To clarify a couple of terms; there are basically two manners in which a rifle receiver can fail.  The first is a “yield failure,” where the receiver ring may be deformed or “ballooned;” this type of failure frequently results in escaped gas and bits of cartridge case.

The second type of action failure is an “ultimate failure” sometimes referred to as a “catastrophic failure.” This is where the action basically explodes, and results in chunks of receiver flying all over the place, to include imbedding themselves in the shooter’s face and other vital regions.

Modern sporting actions (to include the newer FN and Zastava Mausers) are made from hard, high-carbon steel, and are homogenous throughout.  Older military Mausers are made from softer, low-carbon steel that is heat treated or “case hardened” resulting in a fairly soft receiver with a hard shell or “case.”

The result of this type of construction is a receiver with lower yield strength than a modern gun, but a higher ultimate strength.

It is generally considered that the standard large ring 98 action is capable of handling most modern standard-length sporting cartridges.[iii]

Now I’ll admit that I’ve never based a custom sporter on a WWII 98k action – because I’ve never found an “action grade” gun or disembodied 98k action in a condition suitable for “sporterizing.”  I have, however, used a variety of Mauser actions in building custom rifles, including a number of standard large ring 98s.

It is somewhat sacrilegious to cut up an original collectible military rifle for customizing, and I’ve had a few originals in the rack at various times myself.  So, I try to buy disembodied actions where I can.  I will also scour gun shows, pawnshops, and estate sales for “action grade” guns – rifles that have already been modified to some extent, making them fair game for gunsmithing. 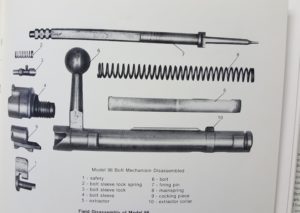 From Olson – a disassembled 98 Mauser bolt

To convert the military 98 action to “sporter” configuration involves four basic steps: 1) reforging or replacing the military bolt handle with one that will clear a low mounted scope; 2) install a low-swing or side-swing safety, again to clear the scope; 3) drill and tap for the scope mounts themselves; and 4) restocking.  Many excellent Mauser sporters have been turned out with the original barrel but given the condition of many surplus guns currently finding their way into the States, rebarreling sometimes becomes a necessity.

With a bit of luck, you can find a Mauser action or barreled action with the gunsmithing work already done.

A good example would be a rifle I built for my own use elk hunting.  I’ve described Thunder Speaker here before; it is a 1908 Brazilian contract action, built by DWM, chambered for the .338 Winchester Magnum.  My original intent was to use one of the large ring ’98 actions I had in the shop, fit a new barrel, stock, bolt handle, etc., which would have entailed no small expense.  The expense of this sort of work can easily outrun the cost of a brand-spanking-new Remington 700 or Winchester 70.

In my case, fate chose to intervene at the August 1996 Tanner Gun Show in Denver, back when once could still make good deals in Colorado gun shows.

While sitting at my table, trying in vain to part with a few of my surplus stuff, a gentleman walked by with a rifle slung over his shoulder, the sign on it reading: “Mauser rifle, .338 Win Mag.”

Like a trout faced with a well-placed dry fly, I rose to the bait.

The rifle was the aforementioned 1908 Brazilian (large ring 98) action, with a teardrop bolt handle, Buehler safety and Weaver bases. The 26″ Douglas heavy sporter contour barrel was Mag-Na-Ported, a plus when you are talking about .338 Mag recoil levels.

Since the barreled action was already in good shape, I made few changes – I just replaced the military two-stage trigger with a Bold modular, added a Bell & Carlson Kevlar stock and a Simmons Aetec 2.5-10X scope on Redfield bases and rings, which I prefer to the Weaver design on rifles with stout recoil.  I loaded up some ammo with W-W brass and 225-grain Barnes X boattails.

The first trip to the range was enlightening.  Between the Mag-Na-Porting, and the straight-line design of the Bell & Carlson stock, the .338 didn’t seem to have any more perceived recoil than a lightweight .308.  Very pleasant to shoot; I ran through all 20 rounds I had loaded before I realized it.  Even more pleasant were the results on the other end of the lane; groups averaged about 1 1/4″, with the largest going just over 2″.  The Simmons Aetec scope proved superb, very bright and clear. 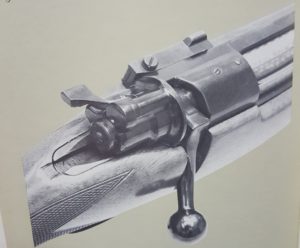 From Olson – An FN 98 Mauser action

When the project was completed, I had a high quality .338 Win Mag sporter with a total investment of about $500 – pretty much what I’d have paid for a new commercial gun in 1996, without the scope, dies or accessories.

Thunder Speaker is a pretty good example of the kind of “custom” work that any reasonably capable gun crank can do by him or herself – no rebarreling or action modification involved, as that work was already done.  These kinds of project guns are readily available, often at bargain prices.  I’ve since spent a little bit more to have a Winchester-style side-swing safety mounted, as the Buehler was too close to the scope objective when set to Safe.

Cost isn’t all that the true gun crank considers, however, and the chance to take game or gather ooh’s and aah’s at the range with a unique sporting arm of one’s own making, will often outweigh mere financial concerns.  I know it does for me.

When considering an action for extensive gunsmithing, the prospective custom Waffenmeister should inspect the following areas closely:

The action should also pass the following standard function check.

If the action passes all of these tests, it should be a good candidate for your custom project.

And finally – please – don’t cut up or modify an original collectible!  There are ample action grade guns around, and also ample collectors who will be willing to take your original off your hands.

It’s often said “the more things change, the more they stay the same,” and this certainly applies to rifle design – given Winchester’s and other gunmakers run back to the original controlled feed design of the 98 Mauser.  Paul Mauser’s M98 has set the standard by which all other bolt action rifles are measured for 120 years now.  I’m confident that it will continue to be the gold standard of bolt guns well into this century.

Happy Fifth of July! To celebrate, I think I'll drink a fifth of something tonight. Probably Early Times in honor…

I hope y'all had a nice Fourth of July. It rained here pretty much the entire day and downtown flooded,…