Today is a celebration day. Papa L was born on this day many long years ago. I am very fortunate to be able to take my sons to have birthday dinner with my father. He never got to do that. Happy Birthday, Pops.

Now, let’s get onto the WTF and outrage. I was working pretty hard in the Morning Links to line up President Pence and a bunch of you didn’t want to play. Come on! Its going to be a blast. We all know The Donald isn’t going to go quietly. We NEED impeachment so that the whole sorry spectacle plays out for months and months and ruins pretty much everyone who touches it. 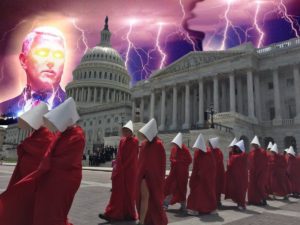 Nehemiah Scudder is that you?

If you commit bank fraud, you get the Paul Manafort treatment. If you steal a bunch of data from Congress and take it to Pakistan, as well as committing fraud you get…. three months probation? What in the fuck?! Are you kidding me?! Its fine to commit fraud as long as I some of it to build a women’s shelter?

I’m sure Sloopy will be along any minute to tell me that Duncan Hunter and his wife were just trying to have a nice life as private citizens.

Prosecutors said the Hunters spent more than $250,000 on personal expenses that they concealed as campaign-related gifts, donations and travel.

Bomb threat at Arlington National Cemetery. Hopefully, this is just some asshole who thought it would be a fun prank. God forbid anyone pull this off, there will be a lot of angry men, well-armed and -trained, looking to punish someone.
If we have any Hawaiian Glibs — stay safe. This Florida Man knows that hurricanes are no fun.
And finally, I hate to say it, but we may not be a big hit with China’s goal to make an internet that is “clean and righteous”. We all enjoy the Hat and Hair. I don’t see a Chinese spin-off in our future.
My vote for the next POTUS.