In thermodynamics, we have three laws, which can be popularly and accurately summed up as follows:

First Law: You can’t win, the best you can do is break even.

Second Law: You can only break even at absolute zero.

And that sums up Illinois’s finances. I spent a day reading through some wonderful and depressing information at the Illinois Policy Institute’s website (www.illinoispolicy.org) and would suggest you do the same, even if you aren’t stuck here like I am: it’s a cautionary tale. I’m just going to toss out a few illustrative highlights I’ve dug up there, which will (I hope) inspire people to look further. And it gave me some good rocks to throw (metaphorically) at our Assembly candidates.

Illinois’s woes are legendary, numerous, and well-documented. I’m simply going to list a few highlighted facts, which lead to the unfortunate and inevitable conclusion: we’re spiraling down the toilet and there’s no way to stop it. The root causes are baked in and, as a practical matter, immutable.

As you’d expect from a state known as The Cradle of Graft, there’s an amazing amount of money lost to corruption. I found story after story showing hundreds of millions of dollars wasted in useless projects, subsidies, payoffs, kickbacks, legal expenses for police abuse, you name it. But all of that doesn’t even make page one of the Pareto chart.

Illinois’s debt is over $200 billion, with state assets of about $20 billion, and this doesn’t even count local debt, which adds another $100 billion onto the flaming pile. This breaks down to over $50,000 for each and every taxpayer in the state. So you can see that the Three Stooges of How We’re Going to Fix Things beloved of politicians giving speeches (“Waste, Fraud, and Abuse”) are down in the noise; $100 million dollars doesn’t scratch the surface. The tax increases that have been proposed (which will somehow magically not drive people and businesses out of the state at a faster rate than they’re already exiting) aren’t even close to enough to cover this debt. 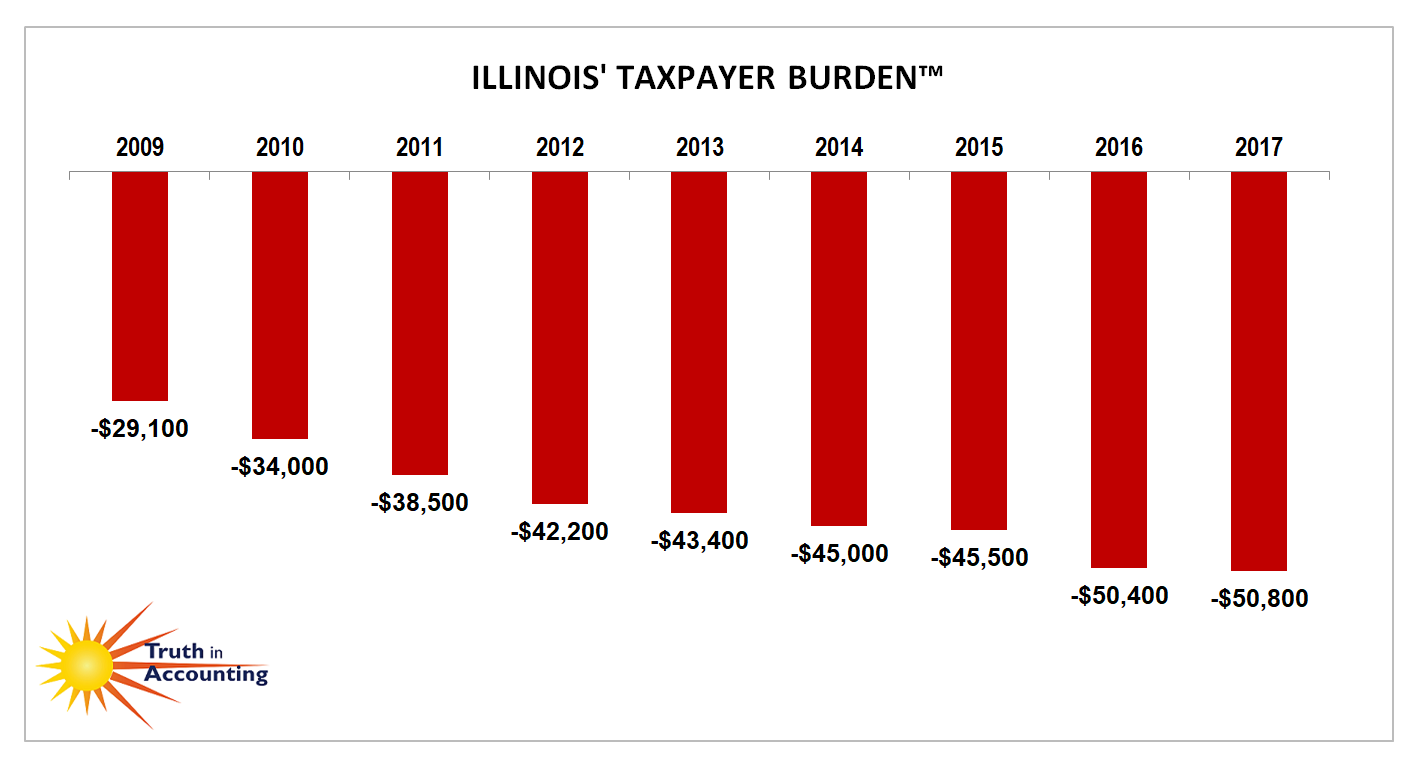 Well, how about cutting spending? Let’s look at that a bit, starting with what we’re spending the money on.

Far and away the biggest cause cause is well-known: public employee pensions and health insurance benefits costs. How bad is it?

Here’s a delightful graphic which just looks at one typical municipal issue, cops. 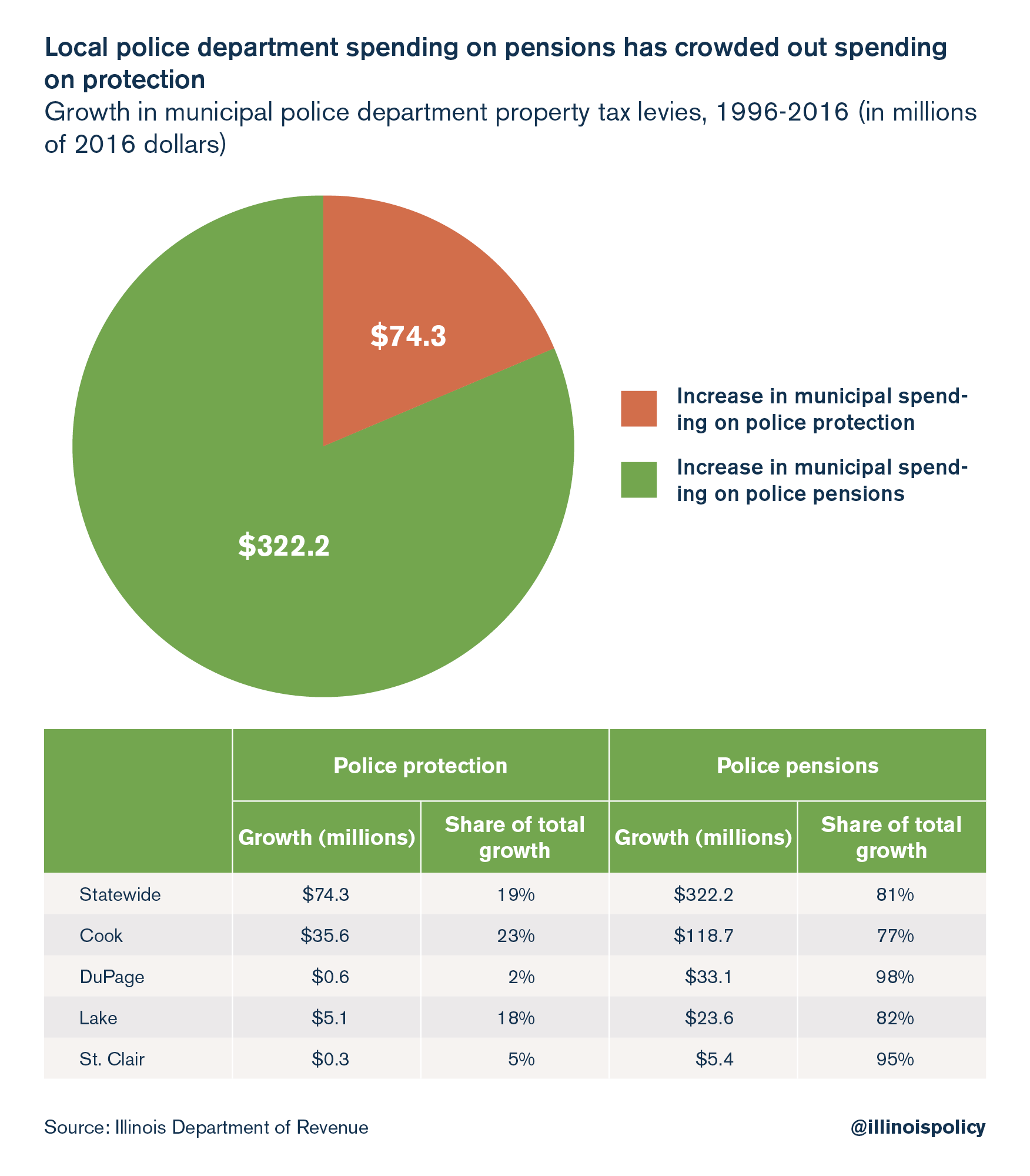 Though there’s variation from county to county, the pattern remains the same. 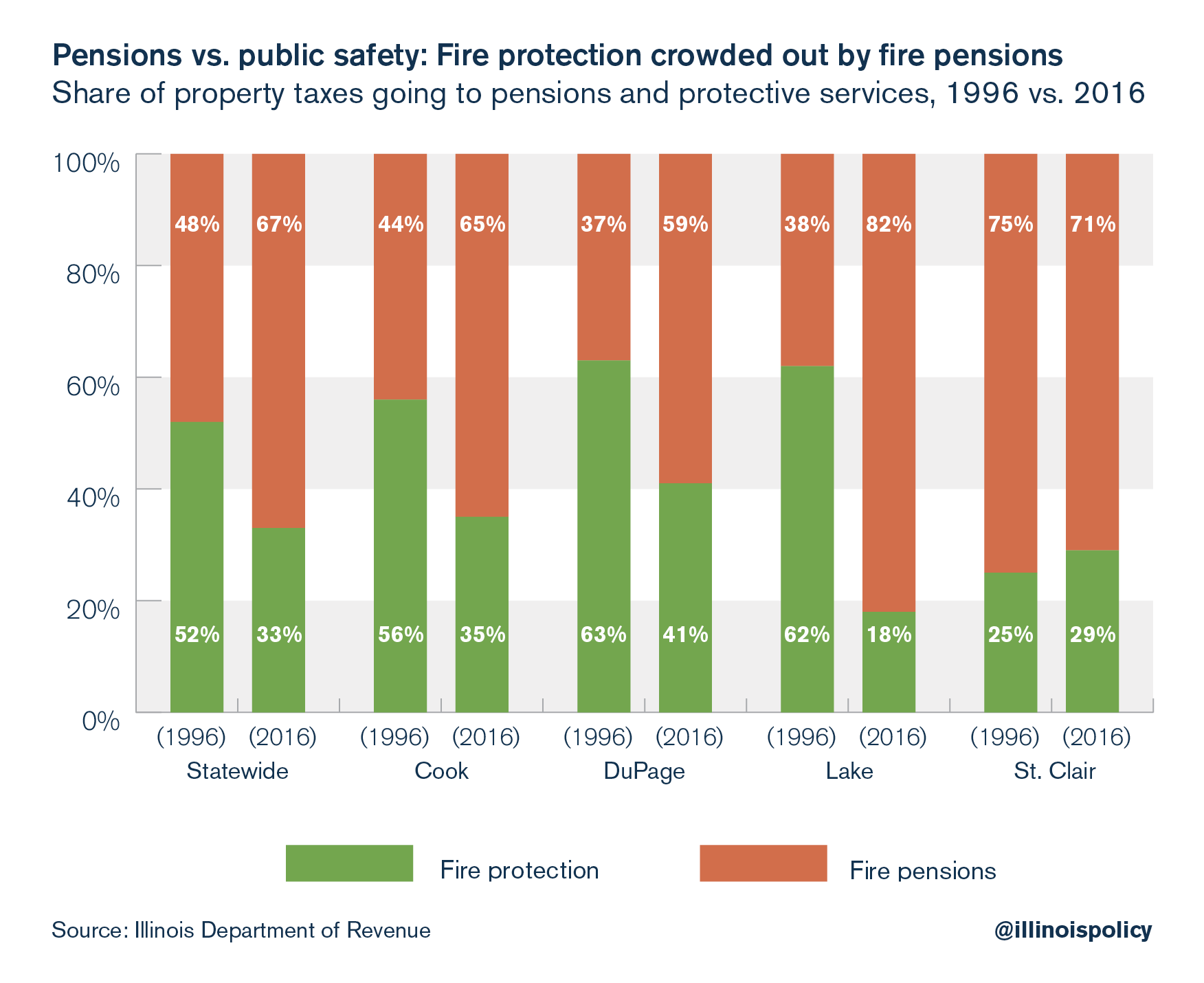 So again, the pattern is clear. If we cut every single penny of cops and fire protection spending, closed every police stations and fire house, and could somehow get around the unions and fire every worker, we would STILL be vastly underwater. There’s nothing unique here; there’s similar charts for teachers, nurses, clerical, administrative, and every other type of state employee classification.

The debt, pension and health insurance costs for retired state workers represent over $185 billion, or about 85% of the Illinois debt. It cannot be stressed enough: this is for people who are no longer working. You could fire EVERYBODY currently employed, cut every goddam program (good or bad), shutter every building, and barely dent the issue. These deals were put in place by the generations of family politicians who have run the state and municipal governments, the Daleys, the Madigans, the Stevensons, the Simons, the Jacobs… all enriching themselves and their hangers-on, while pulling hundreds of millions from the fabulously corrupt unions to indebt all the rest of us.

So since we can’t tax our way out, we can’t reduce spending enough to make a difference, I guess there’s only one thing left to do: cut the pensions. Oh wait…

Membership in any pension or retirement system of the State, any unit of local government or school district, or any agency or instrumentality thereof, shall be an enforceable contractual relationship, the benefits of which shall not be diminished or impaired.

The above is Article 13 Section 5 of the Illinois Constitution. That’s right, it’s in the fucking constitution that we can’t touch the vast bulk of where the money is pouring out. If you want to cut even a dime of the vast sums of money being spent on people who aren’t working , you have to amend the constitution. To do that, there must be an affirmative vote of 2/3 of the House of Representatives and the Senate AND then be approved by a majority of voters on a special election ballot, most of whom do not pay the bulk of taxes. This is de facto a nearly impossible hurdle.

So we can’t win, we can’t break even, and we can’t get to absolute zero debt. The politicians running who pretend to have ways to fix things and to help taxpayers and property owners are lying scumbags. We are all fucked. Like so many others, I’m doing everything I can to get the hell out of here.

I will not miss this place.