Besides being a pervert, and a libertarian, I’m also motorcyclist.  It is a hobby I’ve had for over 15 years and I still consider it part of my life.  There’s really nothing like the feeling of freedom when riding a motorcycle down a country mountain road.  This essay will be a little rambling, much the way I like to ride.  Hope y’all enjoy it.

I bought my first motorcycle in 1999. My dad had been riding a few years, and I decided to ride bitch on the back to see what it was like. And I was fucking hooked.  At that time, I’d had my first real job. I had my own place, and money in the bank, the recipe for first motorcycle ownership.  Within a week of that ride, I had purchased a used Honda Shadow 600 and all the gear I needed.  I taught myself how to ride in a parking lot and off I went for the rest of the summer, taking rides with my dad and his friends.

And my God did I enjoy it.  The only thing close to the sense of acceleration I’ve ever experienced was sky diving.  There’s a strange alchemy that happens; the gasoline is converted to freedom via the engine and a connection with the world around you that is simply joyful is transmuted from the speed and wind.  Not to horn in on Persig, but there is something Zen about riding.  Once you get the mechanics of it, you can reach a state of flow, where your body is taking in all the inputs and piloting the machine so smoothly, so perfectly, it feels like you are in that state of being one with everything.

It is dangerous though. There is no denying it.  Donorcycle is a word for a reason and so is squid.  There isn’t much protection on a motorcycle, and mistakes can cost you dearly.  There’s ways to mitigate the risk; safety classes, good riding habits, proper gear, but there’s no denying the danger. I’m honest enough to admit that is part of the thrill. Part of the fun is that testing of your own skill and nerve.

I went on to take safety classes, teach them, and I’ve owned about 10 motorcycles over the years. From Honda to BMW, from Triumph to Harley-Davidson. I’ve worked on them in my garage. Though I’m at best good for doing bolt-on accessories and extremely simple maintenance. I’ve helped my dad change stuff on his bikes, from replacing the pipes to swapping the carb. And vice versa. There’s still an element of pride in customizing your bike, making it yours, an expression of your individuality that is satisfying.  Add in spending time with your dad and it’s hard to think of a better way to spend time besides actually riding. 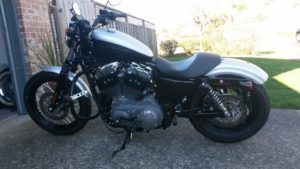 Current Ride. No it doesn’t mark its territory

A motorcycle allows for both solitude and camaraderie.  Riding a motorcycle down a country backroad, somewhere with curving roads and beautiful scenery is a rare respite from crowds.  You get to be alone with yourself in a positive way, let the motion carry off your cares and worries and focus simply on enjoying the ride with no voice but the engine’s growl and whip of the wind.  Or you can ride in a group, safely ensconced in a pack of people with the same interest, enjoying that feeling of doing something fun with people you like.  Making a day of it, stopping to eat and laugh and relax.  I gained, and later my friends my age gained, a great deal of wisdom from such rides with my dad and his pals.

As you may have noticed, riding was often a way for my dad and I to connect.  Some of the rides we took will be those memories I hold onto for a long time.  I remember one year we went to a rally and as was our habit we didn’t haul the bikes in a trailer, we rode ‘em.  The last night of the rally he dumped the bike on his foot and broke it.  I had to rent a 20’ UHaul to get us and the bikes home as that was all that was available.  I had to ride both bikes up the little loading ramp to get them in and then drive us both home 400 miles in that monster.  My dad and I still reminisce about that trip and laugh.   We were chatting about it and other rides that were both perfect and not so perfect last week.  He’s selling his motorcycle this spring as he is no longer going to ride.  He wondered if I wanted the bike, but I have one, and for now that’s enough.

I wonder though.  All the miles under my belt on motorcycles, the joy I get from riding, one day the risk will be too high for the reward and I’ll hang it up too.  I hope that day is a long way off. 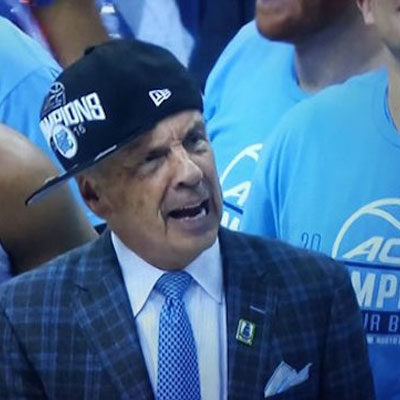 Brett is out getting some emergency dental work done, and his dentist has an accent and an odd attitude. I'll…