After a delightful dinner last week at La Bodega in Kansas City, my thoughts have turned Iberian.

What I love most in the food world is simple dishes with strong and direct flavors. These are especially welcome when 22 oversized millionaires are pounding the shit out of each other on our TV set. Spudalicious and I started a tradition of Football Sunday, wherein we start cooking and drinking early, then never stop until we pass out. Thanks be to all of the munificent gods, SP has kept up the tradition. And here’s some simple tapas recipes which are almost not even recipes because they’re so simple- but beware, this means you have to be super-picky about the quality of the raw ingredients, no cheating.

After you make these, pop a chilled bottle of fino sherry and start in on a food and drink coma. If you’re still awake by the end of the night game, you’re doing it wrong. 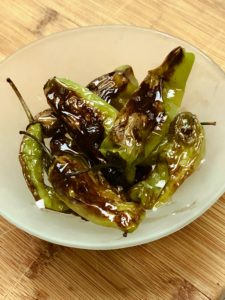 Padrons are a wonderfully-flavored Spanish specialty. You can get them fried and salted at nearly every bar in Madrid, but they are unaccountably difficult to find here in the US. A reasonable substitute that’s easier to source is shishito peppers (or the equivalent Korean kuwari), but you miss the Russian Roulette- real Padrons are sweet, but in every bowl, there’s one that has hoarded all the Scovilles and you never know which one it is until it’s in your mouth.

Heat the peanut oil in a cast iron pan over medium-high flame until it’s just beginning to smoke. Drop in the peppers and spread to a single layer. Let them fry undisturbed until the bottoms are charred. Flip them over, char the other side. Scoop out, let the excess oil drain, then drizzle with olive oil, sprinkle with kosher salt and serve. 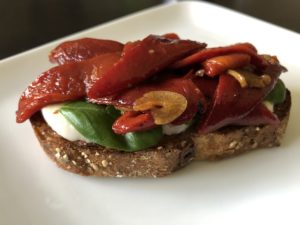 Piquillos are what every sweet red pepper wants to be when it grows up. There’s no way you’ll ever find fresh ones to roast and peel, but the jarred ones are usually pretty good. And Trader Joe’s has them at a semi-reasonable price.

Peel and slice the garlic thinly. Cut the piquillos into strips about 3/4″ wide. Heat the oil in a saute pan over medium flame, then add the garlic. Saute until the slices just barely begin to brown, then turn up the heat and add the sherry. Flame it and reduce by half. Toss in the piquillo strips, stir, then plate and then lightly salt. Allow to come to room temperature, taste for seasoning, then serve. If you really want decadence, grill some bread, brush it with olive oil, smear on some burrata, then top with the piquillos. 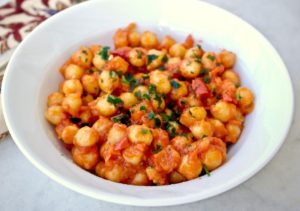 15 oz can garbanzos, drained and rinsed
Or if you’re ambitious, 1-1/2 c soaked and pressure-cooked garbanzos, cooled (and this does taste better)

Peel and slice the onion thinly. Peel and seed the tomatoes, then cut into 3/4″ dice. Heat the olive oil in a saute pan, sauté the onion until it barely shows some brown, then add the tomatoes and garlic.

Cook until the tomatoes look wilted, then deglaze with the white wine. Add the rosemary and the garbanzos, then cook until the liquid has turned to a syrupy glaze. Remove from heat, drizzle with a bit more olive oil, then salt and pepper to taste. Sprinkle with the thyme and serve warm over a thick slice of grilled country-style bread. A young Rioja would be an excellent pairing.

No tapas assortment is complete without two other things: some Manchego cheese layered with a thin slice of membrillo (a thick jellied quince paste), and  tortilla espanola. I think the definitive tortilla is this one.

I Fucking Love Astrology: The Horoscope for the Week of October 21 (Take Two)

This week I had family staying with me, so I had to work on the horoscope in fits and starts,…