Working Your Wood with McGinty – Building a Murphy Bed – Part 1

While the basement is big enough to have a queen size bed laying around I always liked the idea of a Murphy bed since it would free up floor space when the bed isn’t needed. They make hardware kits for a few hundred dollars, and really only a few hundred dollars of wood is needed. However, I thought about it some and figured I could build it with just 4 bolts (3/8ths thick) and use some of the ¾ inch plywood I had in the back of my truck (that was supposed to go towards a different project). I did make a run to the lumber yard for some poplar, but if I had to buy the materials instead of using what I had I would buy ½ inch plywood for the bed frame and cut the poplar down to ½ inch thickness as well. Since the poplar is 13/16ths thick a thin blade on a band saw would do the trick in splitting it into 1/2 inch and 1/4 inch thicknesses. The leftover ¼ inch thick pieces would then be perfect for some of the trim work later on. Unfortunately, I don’t own a band saw (yet…) so I made do with what I had.

I started with the bed frame, ripping the poplar down to 2 ½ inches and cut to length. Then I used my super handy Kreg pocket hole jig (*sticks out hand for a kick-back from Kreg) and screwed everything together. No glue needed as the frame will get glued to the plywood: 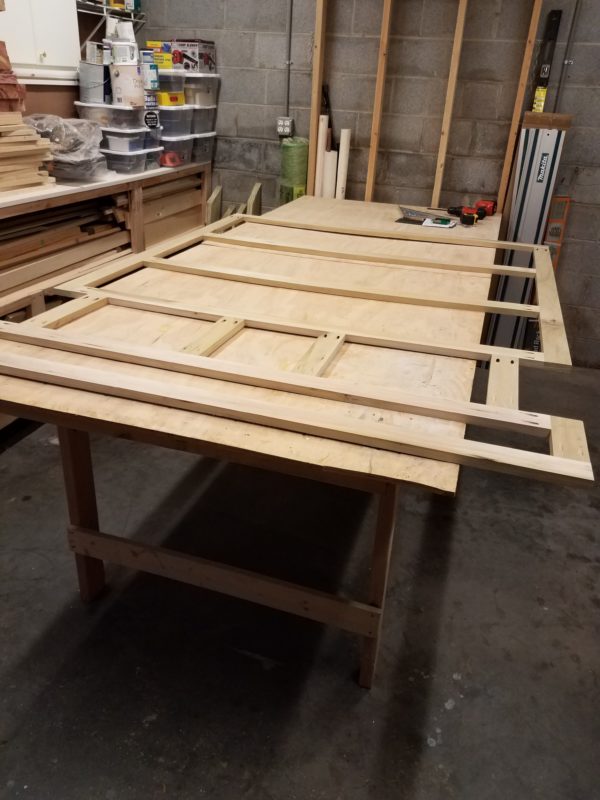 This is a view of the foot end, and the two areas that are “notched” in are where the fold down legs will go.

After I glued the frame to the plywood, I used my super handy Makita track saw (*sticks out hand for a kick-back from Makita) to shave off any proud edges so that the sides of the frame would have a nice even surface to glue to: 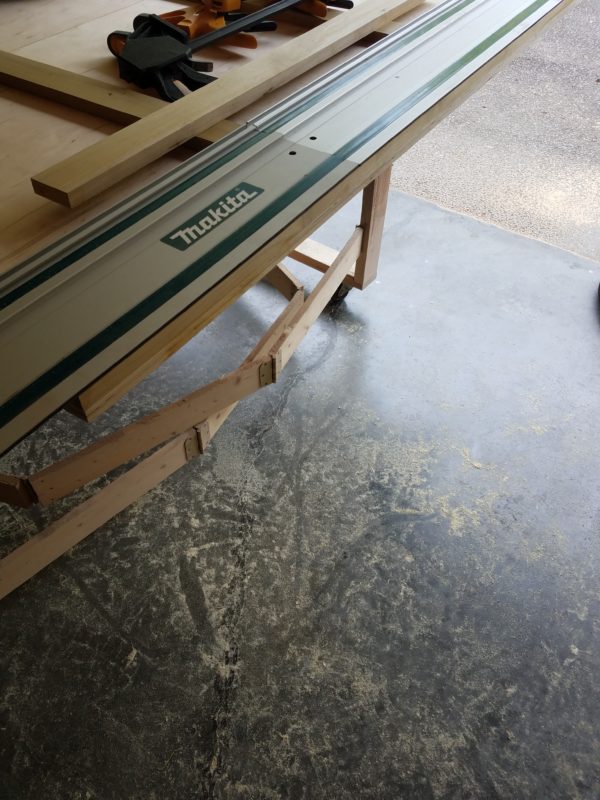 Here is what the bed frame looks like with the sides glued on: 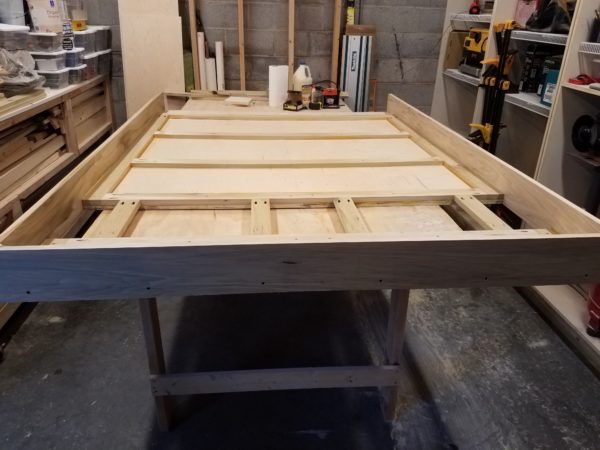 The other end is the head end, and I wanted some type of built in headboard that also doubles as a support for the mattress when the bed is folded up: 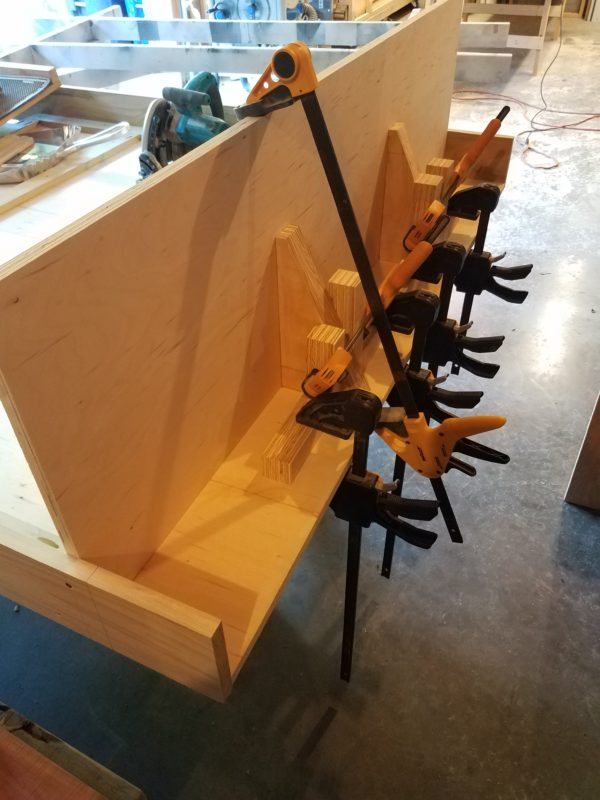 Other than a couple of screws in the sides it’s just glue holding the headboard and the brackets to the frame. The mattress we bought is really light (20 pounds?) so this is plenty strong.

Also, I glued a piece of scrap I had that was ripped to 45 degrees to brace the corners which are also just glued together: 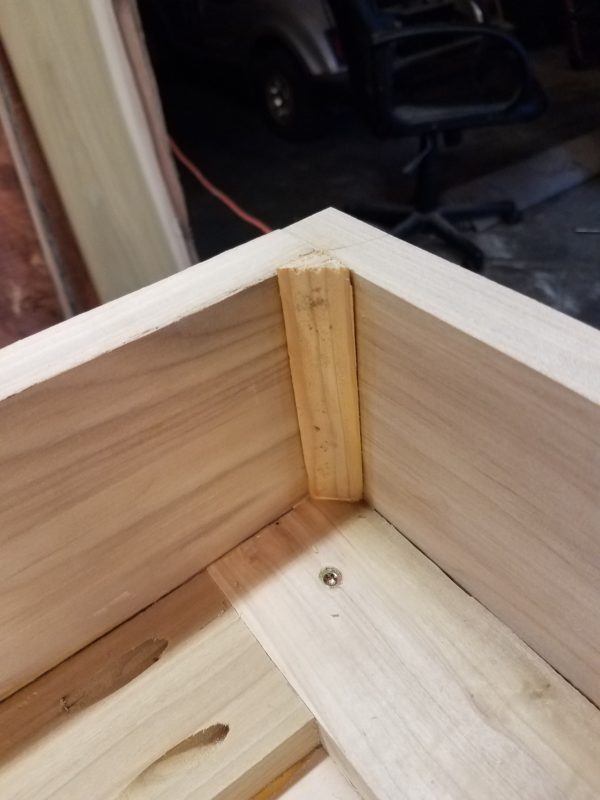 For the case, the ¾ inch plywood is definitely needed as this will support the head end of the bed when it’s down, and the entire thing when it’s folded up.

I cut dadoes on the sides where the back will attach with my super handy Makita compact router (*still waiting on my kick-back Makita!) then pre-drilled holes to make it easier to glue and screw to the back: 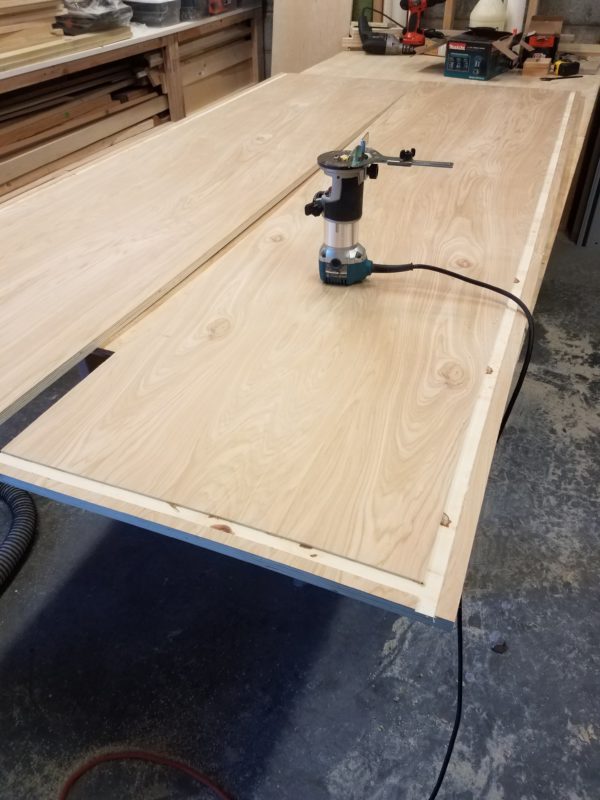 I still managed to get glue all over the place while trying to attach the sides to the back. A nice, slow drying, gel type of glue would be awesome (*sticks out hand for a kick-back from Tite-Bond for the genius idea) as the regular wood glue just ran down the sides in the few minutes it took to assemble it. Perhaps construction adhesive for subfloors or even liquid nails might work better here (*retracts empty hand). Hopefully I’ll remember that next time.

Here is the case with the sides attached: 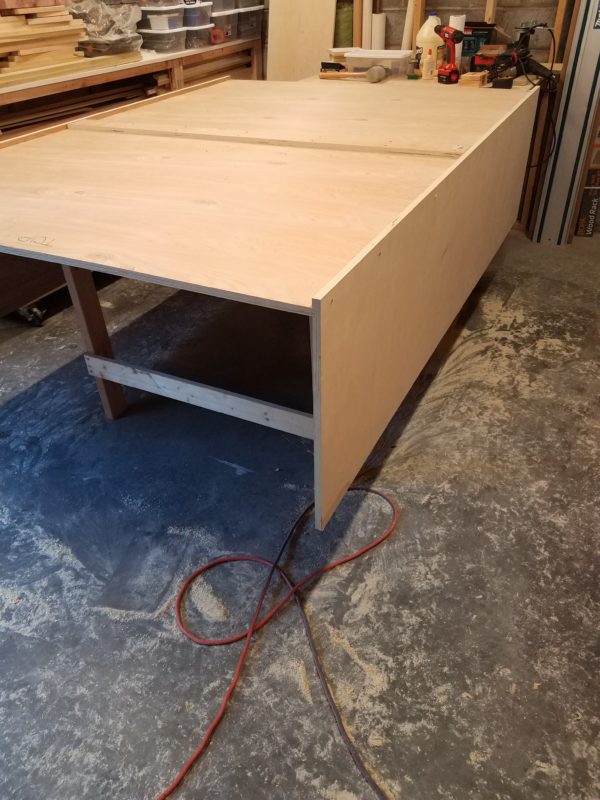 The top was glued all around, but just screws on the sides. The clamps really made for a nice, solid fit: 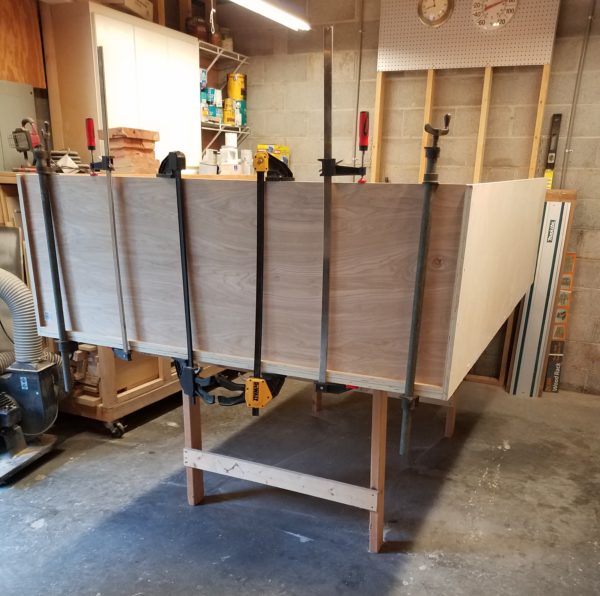 So after the case was built I took out my tape measure to check that the inside was big enough: 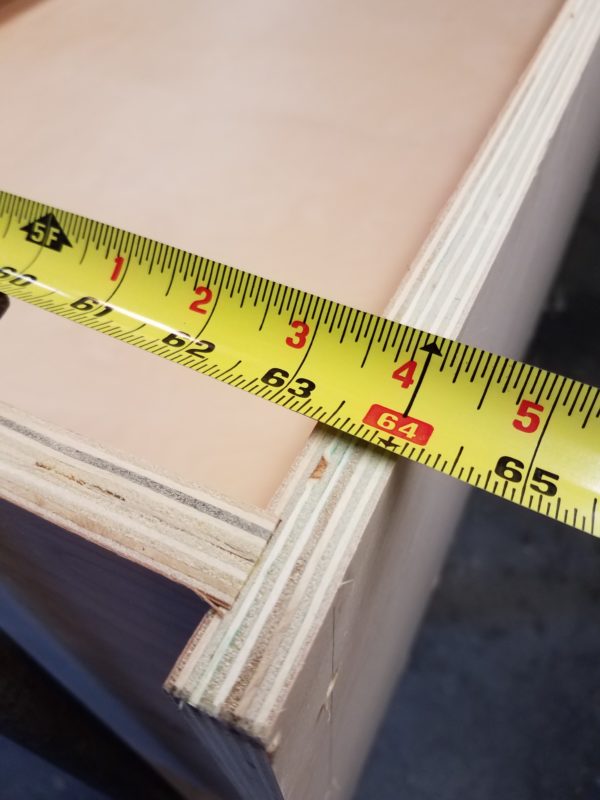 Next I checked the width of the frame: 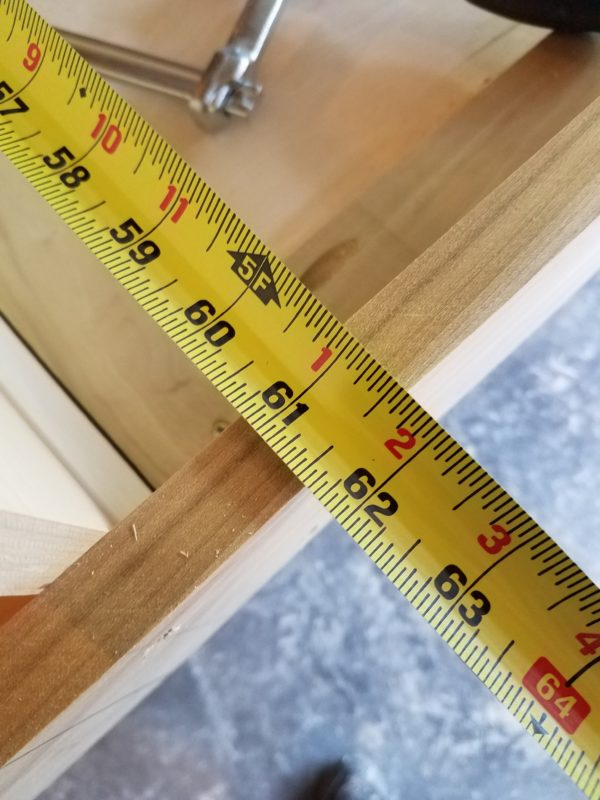 So I decided some wood blocks that go where the bolts mount the frame to the case would do the trick: 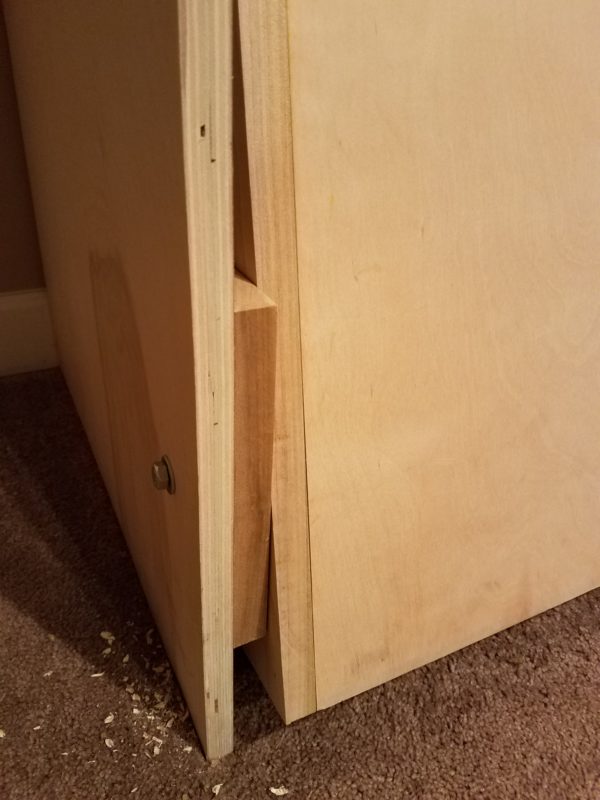 So here it is assembled in the up and down position: 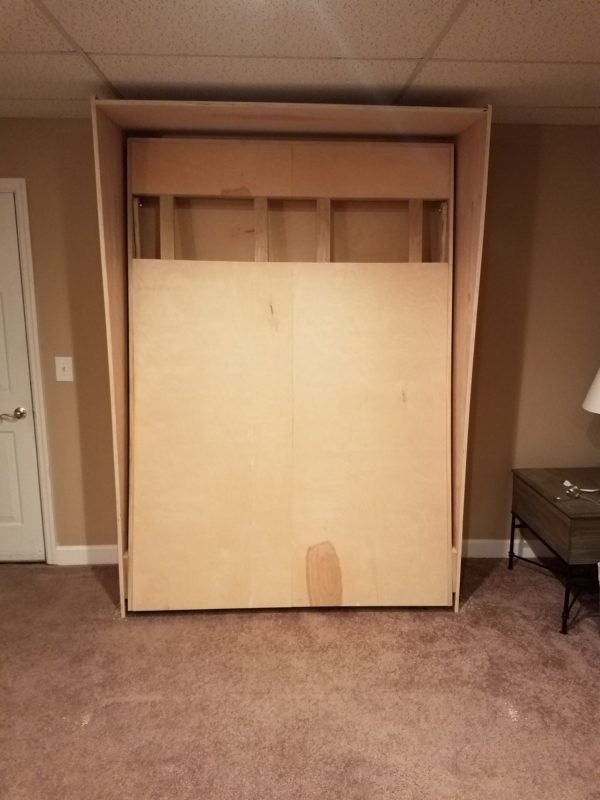 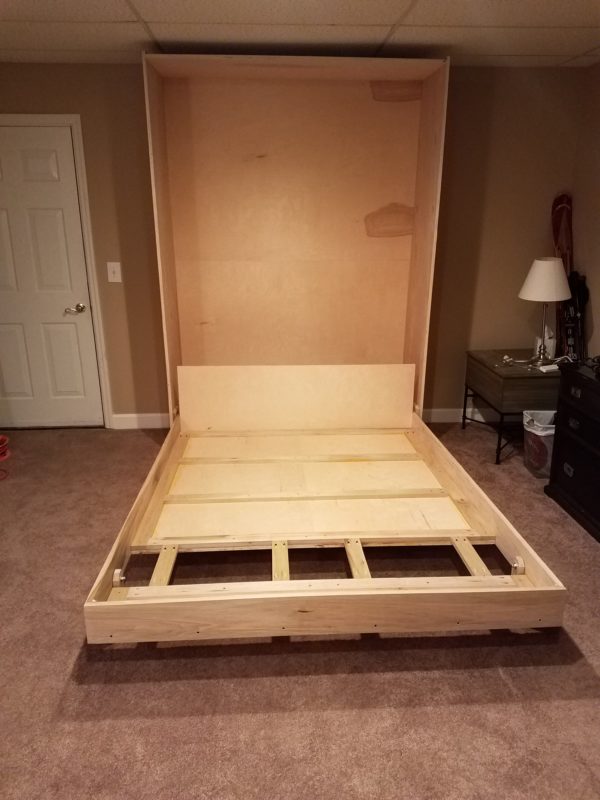 There is a lot of trim work still to do and some kind of safety latch to hold it in the upright position is needed, so I will save that for part 2.