Kitbash: The Wheels on the Wagon

Now that we’ve assembled a passable Caisson, we can move on to the main body of the scratch build. To start with we need to make sure it can hold the weight of the model. While on the human scale, the main model is light, on the scale of the styrene we’re working with, it has a bit of heft. So the basic chassis is going to be a ladder frame of the thicker box tube. As I measure it out to fit the appropriate width of the model, I make a discovery – I cannot cut the box tube squarely. Every slice has a deviation from perpendicular, and there is a variation in length. Not huge, but enough that they will not all have that great of a contact surface on both ends if the ladder frame is assembled hollow. I found this out when the ladder frame fell apart. So Plan B – I take the ladder frame and assemble it on a sheet of plasticard, gluing it to the flat surface. Once glued down, I take a pair of scissors and cut the ladder framed section off the main card. The particular sheet I used was the same one I’d taken the Caisson parts from, so there was a notch already cut into the board. It was also thin enough to cut with regular scissors and not fail catastrophically. I then took little scraps of plasticard sheeting and reinforced the joints on the side facing away from the sheet.

Hand crafted by trial and error

The platform is now very sturdy and will serve as a proper base for the remainder of our work. But it’s ugly, you might say, and I’d agree with you. It is also the underside. People will not be getting a good look at the kludged face of it. They will be seeing the perfectly uniform sheet that we glued the box tubing to. The next step is to position the ‘bearings’. They’re not real bearings, they’re just short sections of box tubing through which the axles will run. But they do fill the important role of attaching the platform to the axles, and thus the wheels. When I first set about planning this, I realized that the slope would be defined by the front and rear wheels, and the middle wheels will be a bit tricky. So I positioned the bearings for the front and rear axles and began brainstorming. I’d initially envisioned short posts which would hold the middle bearings at the proper level below the plane of the platform. This idea got torpedoed by the inability to get precise lengths on the box tubing.

After going through a couple of possible ideas in my head, I decided that the best move would be one which did not depend upon my precision to keep the middle wheels on the proper level. I was inspired by a leaf spring. With the flexibility of plasticard sheeting (or at least the flexibility of the thickness I was using), I could have the bearing for the middle wheels float, and the weight of the model would hold them against the surface underneath. I could have made independent suspensions for two bearings on the middle axle, but I was worried about the strength of such a structure. I had a panel of a good enough width, and a length of box tubing long enough to make a suitable bearing along that width, so I affixed one spring to the front end of the platform and under the front bearings, thus holding the middle axle at whatever height was appropriate for the surface the model rested upon.

There was much rejoicing. 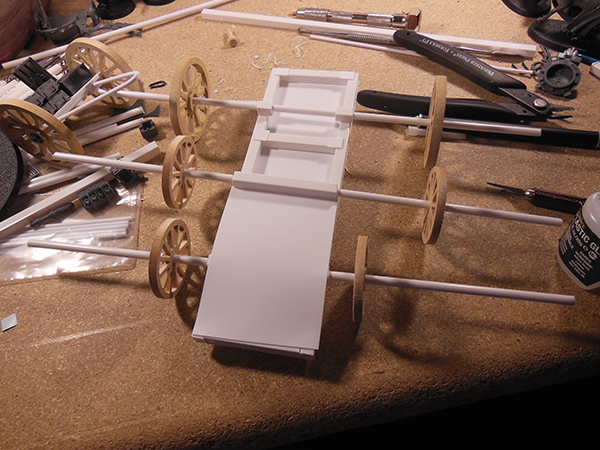 The rejoicing stopped as I turned my attention to the question of keeping the wheels on the axles. Initially, I rejected the idea of gluing them in place. On the Caisson, I’d capped the axle with bitz large enough to prevent the wheels from sliding off. I had no more of them, so I started looking for alternatives. Inspiration struck as I spied by collection of skulls. Not real skulls, mind, but plastic ones for decorating miniatures in Grimdark. So far I’d only used one, and I’d paid good money for them. And the Ork skulls looked just the right size to act as hubcaps. So I started futzing about with the correct angle to trim the end of the axles to get enough plastic to plastic contact to make sure the skullcaps don’t fall off. When I realized I’d trimmed an axle too short, I asked myself why I was going to such trouble to avoid gluing the wheels in place.

The answer was simple – I didn’t want to work with superglue. 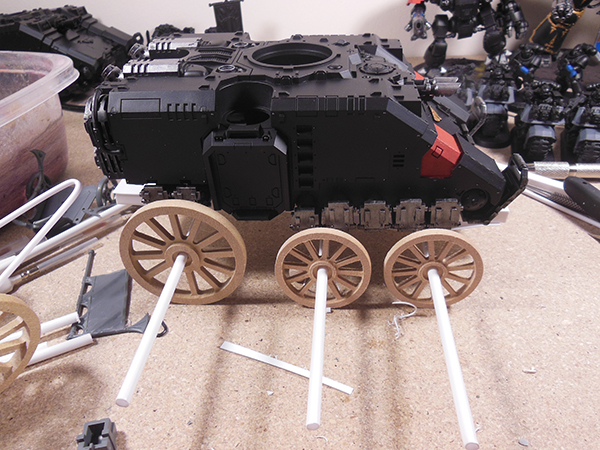 Whining aside, I realized that the simplest way to get the look I wanted was to glue the axle into the wheel and glue the skullcap on the hub. Then I could adjust alignment by simply nudging the skull while the glue was still wet. So, I got out my superglue, cut the axles to the proper length, and affixed the wheels and caps on one end of the axles. Then it was simply a matter of sliding the axles into the proper bearings and gluing the wheels on the other end. I waited until the wheels were dry before attaching the other set of skulls. That way I only needed to worry about lining them up, and not that I was going to dislodge the alignment of the wheel as I did. Why persist with the skullcaps when their purpose was no longer relevant. Two reasons – one, I had grown attached to the visual; two – I’d already cut them from the sprue and cleaned up the attachment points. I could have thrown them in the Bitz box, but there was scant little decoration on this wagon chassis as it was. 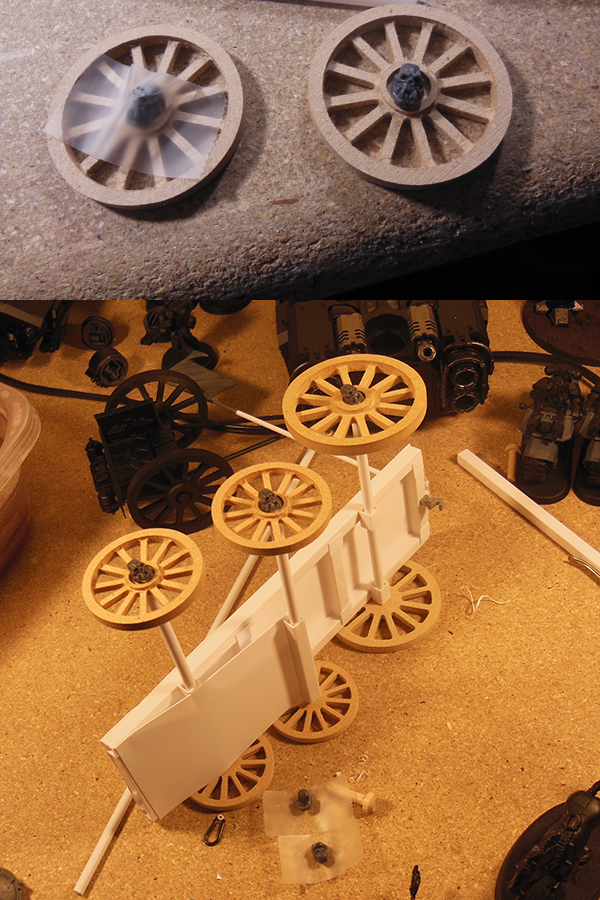 Speaking of decoration, at some point I took the flag from the chariot kit, extended the flagpole, and attached it to the back of the chassis. I also attached a not-so-random towhook under the back end. This towhook is for the Caisson. While all of this was going on, I was also spray-priming the animals and the Caisson. It had gotten up to forty out, and I wanted to take advantage of the warm weather. The assembly of the main chassis took so long that the sun had set before I was spraying that component. Luckily, my spray area is indoors, and I had light to see by. Unluckily, I had an open window sending all my warm indoor air into the cold outdoor air.

A premature curmudgeon and IT drone at a government agency with a well known dislike of many things popular among the Commentariat. Also fails at shilling Books