A History of The Six-gun, Part One

In the history of sixguns, there are two periods of time to be considered:  Before Sam Colt, and after Sam Colt.  The Before Colt (B.C.) era was the time of the flintlock, and a surprising number of innovative repeating guns were made during this time, mostly custom jobs and one-offs.  But there is one B.C. revolver that stands out, and that is the Collier. 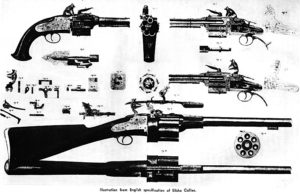 Elisha Collier was a Boston inventor, and his revolver was unique in one respect among flintlock repeating guns; it used a cylinder separate from the barrel to carry the arm’s multiple charges, rather than the pepperbox-styled arrangements that were found prior to his time.  Collier’s first flintlock revolvers around 1814 and production continued up to about 1824, all guns being made by John Evans & Sons of London.  Estimates of numbers produced vary but are almost certainly under 500, in both handgun and long gun versions.

The Collier revolver was a fine piece for its day.  It was innovative, well-made, well appointed and, given the shortcomings of its flintlock ignition system, reliable.  One of Collier’s innovations was an automated priming mechanism in the flintlock’s frizzen, that made possible repeated shots without re-priming the pan.  But the limitations of the flintlock remained; the guns, like all flintlocks, were vulnerable to wet and wind.  The advent of the percussion cap would change all that, but while Collier’s London manufacturer produced a few models using the newfangled percussion ignition system, for the most part Elisha Collier missed that boat.

The real impact of the Collier revolver was not to come from Britain.  It came instead from a young cabin boy aboard the brig Corvo, who saw a Collier revolver on board ship and set to thinking about revolving repeaters.  That cabin boy’s name was Samuel Colt.

The Advent of Colonel Colt 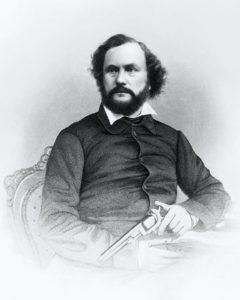 Colonel Colt. He made all men equal.

There’s a reason that the saying “God created men, Colonel Colt made them equal” was a truism in the old West.  The form of the modern wheelgun was in large part designed and defined by Sam Colt, and with the Colt revolver came the advent of the modern personal sidearm.

The young Samuel Colt was an interesting character.  As a youth he was intrigued by gunpowder, electricity – he made one of, if not the first underwater electrically-fired explosive device – and manufacturing.  He’s known for pioneering revolver designs but also pioneered mass production and the use of interchangeable parts along with his contemporary Eli Whitney.  He also was among the first to dabble in such modern marketing techniques as celebrity endorsements, soliciting Italy’s King Victor Emmanuel II among others to make prominent use of his revolvers.  He used art liberally in advertising, paying substantial sums to have artists produce heroic scenes of the West featuring use of his revolvers in fighting outlaws and Indians.  A Renaissance Man he may not have been, but he was a brilliant inventor and marketer, and he changed the nature of sidearms forever.

While the Collier revolver may have been the inspiration for Colonel Colt, he had the advantage of the new percussion cap ignition system.  After making several prototypes, including the famous hand-carved wooden model he produced while on board the Corvo, he arrived on the configuration that defines the sixgun to this day:  A solid frame and a revolving cylinder with stops to align each chamber in turn with the single barrel.

The early Paterson revolvers were iconic, innovative and popular, but in hindsight weren’t terribly effective.  The lack of a trigger guard is noticeable, the guns having a fragile folding trigger that extended when the hammer was cocked.  The first models had to be partially disassembled to be reloaded.  But Colt finally achieved a measure of success with the .36 caliber Belt Model #5, 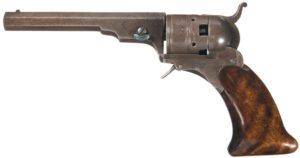 commonly known as the Texas Paterson.

By modern standards the ergonomics of the Paterson revolvers are pretty bad.  The odd-shaped grip doesn’t suit people with large hands.  The guns were a little light on the barrel end unless you had one of the 9” versions, making them feel whippy in handling; but the long-barreled guns were not as quick to clear leather, putting the horse soldier or gunfighter at a disadvantage.  Even so, the gun pointed naturally and shot reasonably well.

The Paterson was imperfect in other ways.  Guns made before 1839 were, as noted, difficult to reload, and all the Paterson guns only held five shots.

Being a five-shooter rather than a six-shooter was a problem for one more reason than the one missing shot.  All Colt revolvers up to and including the famed Single Action Army had the same issue, namely that the only safe way to carry one was with the hammer down on an empty chamber.  This reduced the Paterson to a four-shot gun, and (at least, before 1839) one that couldn’t be quickly or easily recharged.

Bear in mind that this was an era in which most sidearms were still front-stuffing single-shots, so the handicap wasn’t seen as being as dire as we might consider it today, in a time where many semi-auto sidearms carry enough ammo in a single magazine to lay low a small army of attackers.  Even so, the limitation often led to the conscientious pistolero carrying two or three revolvers on belt or saddle. 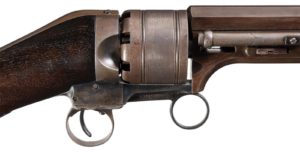 The Patent Arms Manufacturing Company sold a number of sidearms to the US Army who issued them to troops fighting in the Second Seminole Wars.  Those troops favored the Paterson Colt’s capacity, but Army evaluators found the guns too finicky and unreliable in combat and so disallowed any further purchases.  Sam Colt did sell a couple hundred sidearms and a like number of revolving rifles to the Republic of Texas, who issued them to their new-found Navy, but when that Navy disbanded in 1843, the Paterson guns were issued to the Texas Rangers.  The Rangers liked the revolving guns, which gave them a much-needed firepower advantage over the Comanche Indians, with whom the Republic of Texas was then engaged in hostilities.

It was in fact the use of Paterson revolvers by the Texans and their increasing popularity with the new waves of settlers crossing the prairies that set the stage for the next step in the development of Colonel Colt’s revolvers.  While the Paterson Colt was arguably a failure both in martial and commercial sales, and while the Patent Arms Manufacturing Company went under after only six years, a seed had been planted.

That seed sprang forth in 1846, when General Zachary Taylor send a young Army Captain, Samuel Walker, to Connecticut, where Sam Colt was engaged in manufacturing underwater electrical cable, tinfoil and marine mines.  Captain Walker had one mission:  To convince Colonel Colt of the need for a revised revolver, one that would be more reliable, more rugged and more powerful than the .28 and .36 caliber Patersons.  That mission by Captain Walker would bear significant fruit…