A libertarian analysis of Chevron deference

Why the hell would I bother to give deference to a damn evil oil (pronounced ohl) company? Well, Chevron deference has very little to do with oil, and nothing to do with genuflecting to a multi-national molester of Gaia. Chevron deference refers to the measure of how much a court should defer to an administrative agency’s interpretation of an ambiguous statute when a case hinges on the ambiguity.

The court is placed in an interesting bind. How do they interpret the statute? Perhaps the court is inclined to agree with Top Hats R Us that “most senior” means longest tenured. Perhaps there’s some weight to be given to the NLRB’s interpretation of the statute given their administrative role. In Chevron v. A bunch of Hippies, the SCOTUS answered this question once and for all (lol).

If Congress has explicitly left a gap for the agency to fill, there is an express delegation of authority to the agency to elucidate a specific provision of the statute by regulation. Such legislative regulations are given controlling weight unless they are arbitrary, capricious, or manifestly contrary to the statute. Sometimes the legislative delegation to an agency on a particular question is implicit, rather than explicit. In such a case, a court may not substitute its own construction of a statutory provision for a reasonable interpretation made by the administrator of an agency.

Well, this may seem like a pretty easy decision for a libertarian. Either an agency gets to define the terms, or the people get a say in the interpretation of the terms. This takes some of the power out of the hands of the government. It’s very easy to over simplify the libertarian view on Chevron deference as “bias toward the agency means bias toward big government.” 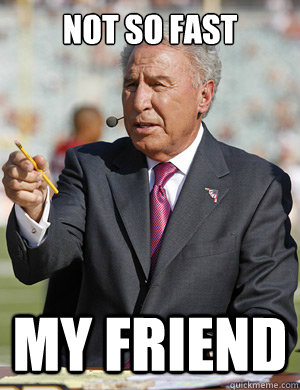 As a general rule, deference to agencies tends to promote a pro-regulatory agenda, whether of the right or of the left. But there are notable cases where it might instead promote deregulation. It is worth remembering that Chevron itself deferred to a Reagan-era agency EPA policy that liberals thought did not regulate industry stringently enough. The plaintiff challenging the agency was the Natural Resources Defense Council, a prominent liberal environmentalist group. Ironically, Neil Gorsuch’s mother, Anne Gorsuch Burford, was the EPA administrator at the time the lawsuit began. The fact that his mother’s agency ultimately won the case evidently has not prevented Gorsuch from wanting to overrule it.

The separation of powers argument against Chevron deference is a strong one. Critics claim that the judicial branch unconstitutionally abdicates its judicial power when it defers to an administrative agency. Somin explains:

Article III of the Constitution gives the judiciary the power to decide “all cases, in law and equity, arising under this Constitution, the laws of the United States, and treaties made, or which shall be made, under their authority.” Nowhere does the Constitution indicate that federal judges are allowed to delegate that power to the president or to the bureaucrats that work for him in the executive branch.

The legislature makes the laws, the executive branch enforces the laws, and the judicial branch interprets the laws. To be mixing and swapping these powers between branches is to undercut the fragile balance crafted by the founders. Cutting down to the core issue at hand, when the enforcement power of the executive branch requires some minimum amount of interpretation of the statutes that it enforces, how much of that interpretation is covered under the umbrella of the enforcement power, and how much is subject to reinterpretation by the judicial branch using their interpretation power? Justice Gorsuch has a very simple answer… all of it is subject to reinterpretation. This seems on first blush to be a fairly obvious statement. Where a branch is, by necessity, stepping on the toes of another branch, it would seem obvious that the other branch would have power to override the decisions of the overreaching branch. Chevron runs against that simple principle, thus Chevron is bad law.

Well, you may ask, how is this even a controversy? It seems fairly cut and dried. It’s not.

The Court [in Chevron] gave three related reasons for deferring to the EPA: congressional delegation of authority, agency expertise, and political accountability.

Who haven’t yet been implicated in this mess? The legislature. Yeah, without the legislature passing crappy laws that are ambiguous and rely on administrative bureaus to do the real legislating through regulation, this wouldn’t be an issue. Yes, the legislative branch is the source of the mess that is Chevron deference. The reason for this will become clear later, but let’s just say for now that the legislature isn’t stupid, they know exactly what they’re doing when they pass these vague, crappy laws.
Going back to the stated reasons for deference to agency interpretations, a problem with this scheme is that one of the factors is based on a fiction. Political accountability? Not necessarily so says Randolph May:

Chevron itself involved a decision of the Environmental Protection Agency, an executive branch agency. With regard to executive branch agencies like EPA, or, say, the Departments of Commerce, Labor, or Transportation, it may be natural, as Justice Stevens did, to refer to the “incumbent administration” and to invoke the chief executive’s direct accountability to the people.

But not so with the so-called independent agencies like the FCC, SEC, FTC, or the NLRB, with their potent brew of combined quasi-executive, quasi-legislative, and quasi-judicial powers. Unlike the single heads of executive branch agencies who may be terminated at will by the president, the independent agencies’ members serve fixed, staggered terms. And the prevailing view is that they may be fired by the president only for good cause.

There are strict rules for holding agencies politically accountable, especially the independent agencies. The President, on a whim, cannot clean house at the EPA or the SEC. These bureaucrats may be even more fully insulated from the political winds than the judicial branch… a branch set up to specifically be insulated from politics.

Quickly addressing agency expertise, I’ll say that as a person who has to deal with an expert agency on a daily basis (the USPTO), agency expertise is vastly overrated. If you trust the cop pulling you over to know his 4th and 5th Amendment jurisprudence, then maybe this “agency expertise” thing works for you, but for those of us in the real world, it’s laughable that the bureaucrats at these various alphabet soup agencies could be called “experts.”

Another motivation discussed by the case was Congressional delegation. Can Congress even delegate their lawmaking authority? Is that Constitutional? Facially, no:

The non-delegation doctrine, grounded in the separation of powers, arises from the very first word of the Constitution, after the Preamble: “All legislative Powers herein granted shall be vested in a Congress of the United States ….” (emphasis added). Taken at face value, that clear a statement would seem to preclude much of the “lawmaking” that goes on every day in the 300 and more executive branch agencies to which Congress over the years has delegated vast regulatory authority.

However, FDR, riding on the coattails of Woody “The Real Lizzy Warren” Wilson and Teddy “Bloodthirsty Sociopath” Roosevelt (go read about them), did a number on the Constitution with his judicial intimidation tactics, including the non-delegation doctrine. Hell, how are these independent, legislatively controlled executive administrative agencies allowed to exist? Well, when you scratch the paint away, you’ll find a “living Constitution” argument:

Remember, “flexible enough” means that we get to ignore the plain text meaning of the Constitution, and “did not intend” means that “The executive power shall be vested in a President of the United States of America.” in Article II of the Constitution does not actually mean all executive power, but only the executive power convenient to the totalitarian left. More seriously, there’s a good article here on the subject.
Getting back to the subject at hand, current law says that the legislature can delegate their lawmaking responsibilities to executive and independent administrative agencies on a limited basis, and the agencies are tasked with executing intentionally ambiguous statutes laid out by Congress. This actually shifts the core question a bit. What if the administrative agencies aren’t interpreting the law nor executing the law, but actually making law? *shudder*
I actually think that this is the closest interpretation to the truth, and I think it highlights what’s actually at the root of the problem. Chevron deference is merely a diseased branch on a rotten tree, the trunk of which is legislative abdication of responsibility. The judicial branch should excise the headless fourth branch of government wholecloth, and should slap the legislature back to the 19th century. The political accountability for laws rests on Congress. The expertise as to the meaning of the law rests on Congress. The delegation of authority by Congress is unconstitutional, and the court’s unwillingness to tell Congress to do their damn job is what is creating this issue with Chevron deference.  It’s time for the Supreme Court to bring back the non-delegation doctrine!
The good news is that it looks like the SCOTUS is using the new Chevron unfriendly majority to move against Chevron deference. The better news is that it looks like SCOTUS is going to chip away at the hostility toward the non-delegation doctrine, too!
Stay tuned during this next court session. Perhaps we’ll see a bit of power stripped away from the unconstitutional administrative branch. It’d be the first step away from handing unfettered power to these technocratic abominations in nearly 80 years.

Well, some days, its easy to be the hero at work. Today, two lines of javascript, taken almost verbatim from…

Not a lot of news happens during this time of year, everyone who makes news is on vacation.   Except…