[Editor’s note: Yes, this is a repeat of last year’s piece. But, don’t think of it like a tired, old, overdone rerun. Think of it more as a new Glibertarians choliday tradition! (TRADITION!) ~ SP] 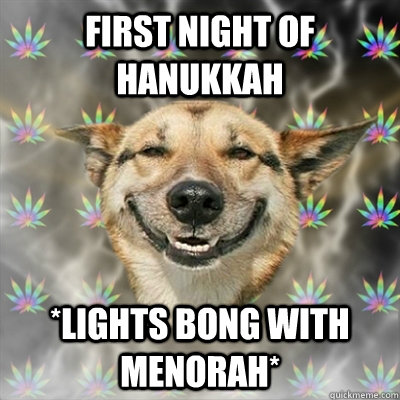 Yes, it’s that time of year again, when Jews all over the world celebrate their most treasured and most holy days… well, not really, but I’ll Jewsplain.

First, the part everyone knows: this is supposedly the commemoration of the Maccabees doing something or other. But here’s the catch- Jews do not accept the books of the Maccabees as canonical and derive their understanding of Chanukkah and the Maccabees from the Talmud. The usual reason given is that the Macs came along too late, the canon was completed. But it may be deeper than that, so let’s start with the familiar parts.

The whole megillah happened around 2200 years ago when I was just a wee yeled. The Middle East was a seething cauldron of petty rivalries, bloody wars, and conquests back and forth, unlike today’s quiet and civilized environment. The two major warring empires were the Ptolemies and the Seleucids, who were proxies for various swarthy European types. There were some Macedonians, Romans, and Persians in the mix as well. Like I said, it was a mess. And as usual, the Jews were right in the middle of the shit because of their geographic location and because Yahweh liked fucking with us.

If you read through the histories of that era, it’s a confusing mess because so many of the warring monarchs had the same name, with only nicknames and numbers allowing you to tell them apart. But the overwhelming cultural bit of this was the spread of Greek civilization, which brought things like rationality, philosophy, mathematics, and science to the gibbering tribal masses of Asia and Northern Africa. Unlike the tribal kingdoms, the Greeks were very big on universal culture and values, as well as a surprising tolerance for other ways of life- they basically were the first assimilationists, and in ways that would seem very familiar to Americans.

Now, the official story is that those awful Greeks, who at that point in history ruled over Palestine, had a culture that was so attractive that the Jews started assimilating, speaking Greek, adopting airs of tolerance, eating pork, wrestling naked, and wearing clip-on foreskins (that is not a joke, they really had them). This, of course, could not be tolerated by the Jews, goes the usual narrative. And then, in a total reversal of Greek policy, the latest tyrant, Antiochus IV (Epiphanes), was said to have outlawed Jewish religious practices and forced everyone who hadn’t adopted Greek culture and mores to do so by clipping on foreskins and chowing down on ham (anticipating the later American Jewish custom of eating pork by dismissing it as “Chinese food”). So after the usual litany of atrocities, which prominently featured defilement of the Temple in Jerusalem, they naturally rebelled. The Talmud gives its version of one of the atrocities, the story of Hannah and her sons. One at a time, Antiochus ordered each of Hannah’s sons to eat bacon, and each son in turn refused, shouted a slogan about their devotion to Yahweh, and was then killed for maintaining their religious righteousness. After watching each of her sons in turn being executed, Hannah threw herself off a building in a fit of grief and madness. An inspiring tale, nu? 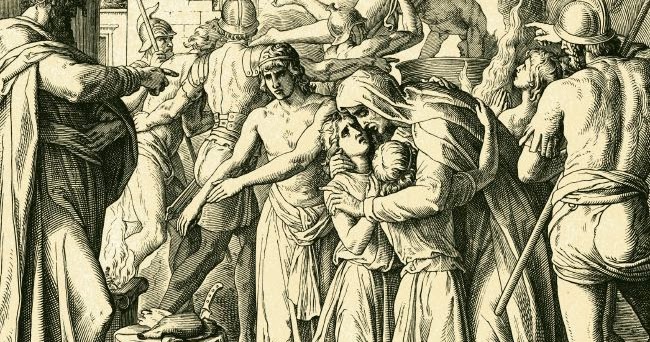 The familiar tale continues with the great Judah Maccabee leading his ragtag band of righteous Jews into a successful rebellion against the heathen Greeks, driving them out of Palestine, then rededicating the Temple by the use of various priestly rituals. Note the last. The miracle of Chanukkah was the burning of a ritual lamp in the Temple for eight days while consuming only one day’s worth of oil, which is all they had in terms of ritually pure oil.

As a libertarian sort, I’ve learned to be a bit cynical and assume that any story like this glides past unsavory truths. I also assume that cupidity rules and is usually the driver of events. So, with that in mind…

At that time, there were multiple schisms among the Jews- the famous Life of Brian scene about the Judean People’s Front versus the People’s Front of Judea was not entirely a joke. Three of the major factions were the Pharisees, the Sadducees, and the Hellenizers. The Pharisees and Sadducees fought over who really had control of Jewish law, with the Pharisees maintaining that the rabbis were really the ones to control things, the Sadducees insisting that it was the Temple priests, and the Hellenizers being the Reform Jews of their time, incorporating Greek practice and language into the Temple rituals and eschewing the fundamentalist interpretations of Jewish law (yes, this is an oversimplification, but the big picture always is).

Judah Maccabee was the son of Mattathias, who was a Temple priest and a fundamentalist. Within the priesthood, the Hellenizers and fundamentalists struggled, with the Hellenizers having won out. Their priest, Menelaus, deposed the fundamentalist priest, Jason, by paying off Antiochus. This was a good investment since this gave Menelaus control of the Temple treasures and receipts. Mattathias, being a fundy allied with Jason was clearly a loser here. In his view, anyone not following the religion in the way his faction thought proper should be executed and they certainly did their share of killing. And indeed, one of the outcomes of the rebellion was the execution of Jason as a heretic and traitor to the One True Faith.

So a cynical person might look at this as less of a rebellion against Antiochus, but more of an internal struggle between factions fighting for power and treasure. The winners write history, so the fact that the Greeks mostly didn’t interfere with religious practice before or after the Maccabean rebellion but somehow Antiochus was the exception and tried to wipe out Judaism could possibly be… well you know what self-serving storytellers and drama queens those Middle East folk can be. The cynic might look at historic parallels and see the Maccabees as akin to the modern Taliban, fighting against the encroachment of civilization (literal, in this case) in favor of a strict and violent fundamentalism that just coincidentally put them in power. And that’s what we celebrate for Chanukkah.

Fun fact: the Hebrew word for a Jew who has given up strict religious practice is “apikoros,” which derives from the Greek “Epicure.”

One more cynical observation: why the books of the Maccabees are not canonical among the Jews despite lots of slaughter and a Yahweh miracle. Although the usual excuse is timing, someone miiiiight notice that the decisions about canonicity and religious practice were made by the faction which survived and ended up controlling Judaism- the Pharisees, bitter foes of the Sadducees, with whom the Maccabees, as priests who got their share of Temple treasure and tribute, were aligned. But that would be overly cynical, right?

Fun fact: Judah Maccabee was the first Jew to make contact with the Romans, seeking assistance in his fight against the Greeks. As readers of Matthew will note, this did not end well for the Mac family.

Fun fact: although potato latkes seem like the canonical Chanukkah food in the US and Europe, in Israel they’re almost unknown. The treat of choice is… jelly donuts. And why is that? Because the bakers in Israel have traditionally been part of state-sponsored trade unions. And although latkes are easy to make at home and best served fresh, donuts are more difficult and are much easier to pick up at a (union) bakery. Just look for the union filling.

And speaking of latkes, here’s the way to do it right.

Day 5 and I'm still horribly stuffed up and drug reliant, but slept through the night.   Today in…

I'm stuck in Dearborn with a stomach bug. It has made me very popular with my clients and coworkers --…