It’s time for another woodworking project. Back in the spring a coworker and I headed up to his family farm to cut some cedar planks with his chainsaw sawmill. Apparently the mold or something from the cedar trees affects the apple trees they are growing so they have been cutting down the cedars. They had a nice big tree and I was able to get 5 planks that are 2 inches thick. You would never be able to find this at a lumber mill, and I got it for free so I am grateful for their generosity. I wanted to make a picnic table with the 3 planks pictured below, but I settled for two planks that I cut to 15 inches wide. 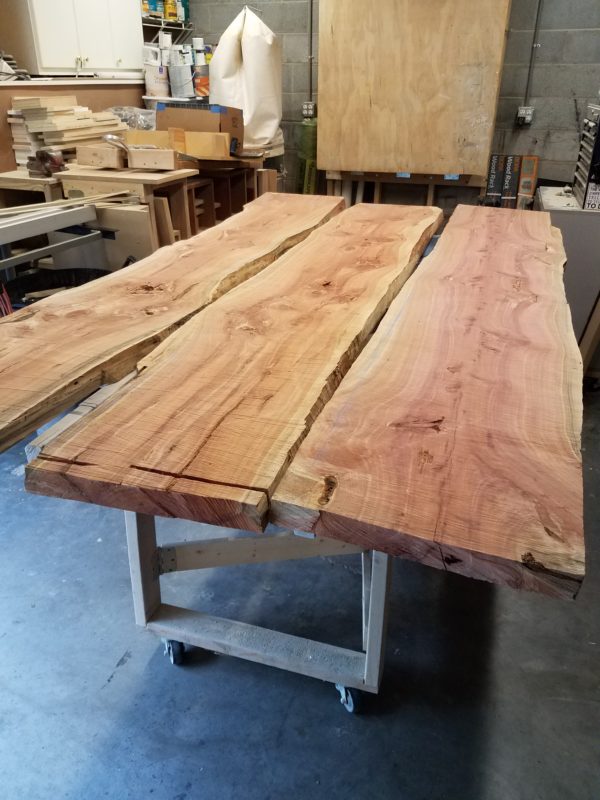 The plan was to have a live edge on the table, but due to how the slabs milled up I settled for a part live/straight edge combination, with other parts of the edge being sanded down cuts from the chainsaw. The 80 grit paper really smoothed these out so it looks like a live edge. 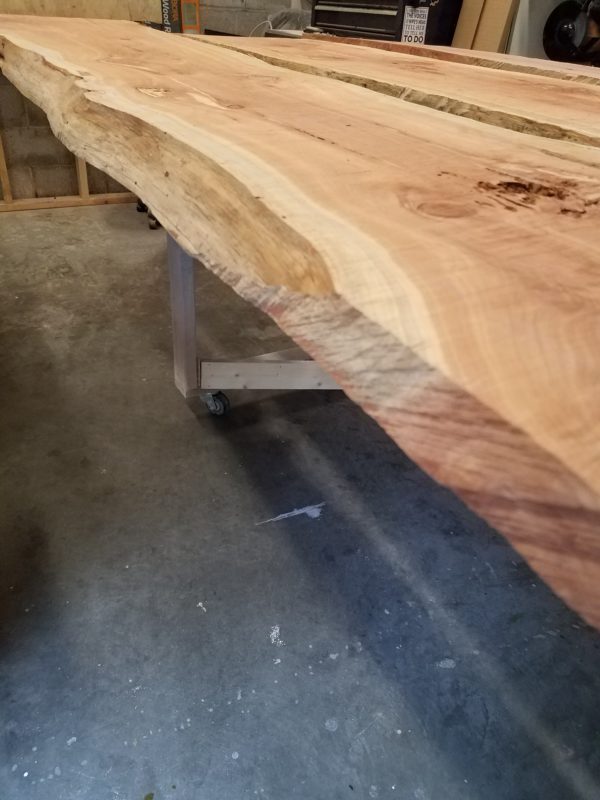 These planks are fairly heavy so running them through my table saw would have been difficult. I ended up buying a Makita track saw with an extra track to cut boards like this or to break down full sheets of plywood. The tracks connect fairly easily and I found that they were in a straight line when I placed my 6 foot level against them: 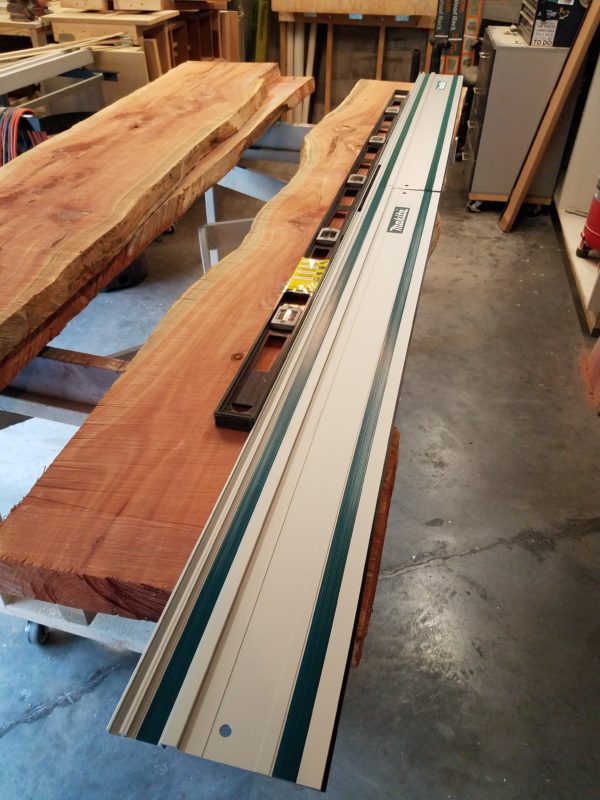 Side note: if you are doing any framing, hanging doors, or leveling cabinets, I highly recommend getting a 6 foot level. I think I bought this model by Johnson to help with building a deck at a previous house, but never got around to it. So yeah, I have a 6 foot Johnson…level.

The tops only needed a little bit of sanding to knock down the milling marks, and the result is a nice rustic look. The right side is a single pass with 80 grit paper on my orbital sander, and the left side is what it looked like before. 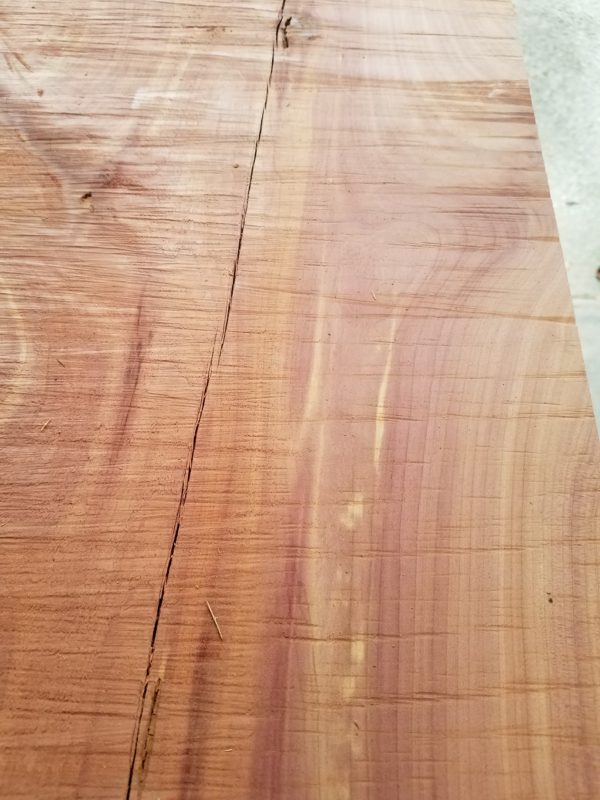 Since the table will be outdoors I used pressure treated pine to make the frame. I wanted the table to be 30 inches high, and with 2 inches being the cedar, a simple X frame that is 28 inches high and 28 inches wide will suffice. Enter geometry and trigonometry: 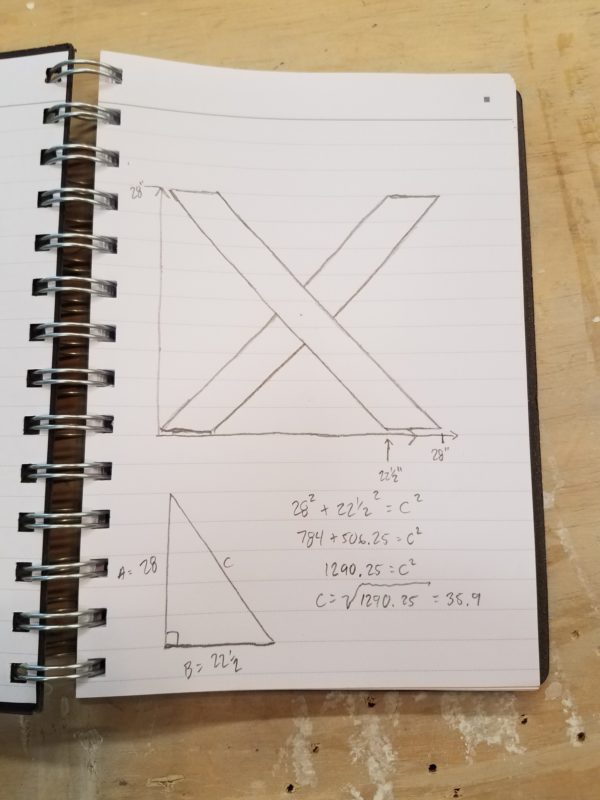 After about 2 hours of trying to remember this shit from 20 years ago, and messing up the cuts on the 2×6’s – not once but twice, I figured I would just draw the dimensions on my workbench and get the angles and measurements from there: 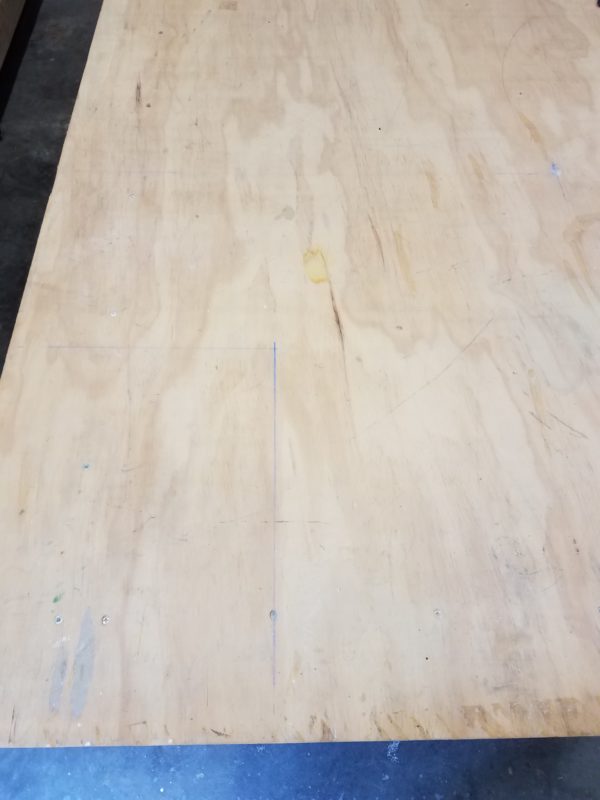 It’s a little hard to see but I just used my chalk line to draw out the 12×16 inch bases for the benches, and the 28×28 inch bases for the table. Once I had the board lined up how I wanted, I drew a line along the edge of my workbench and then used a sliding bevel to figure out the angle. This then comes in handy for aligning the miter saw as the angle worked out to be in between 25 and 26 degrees. 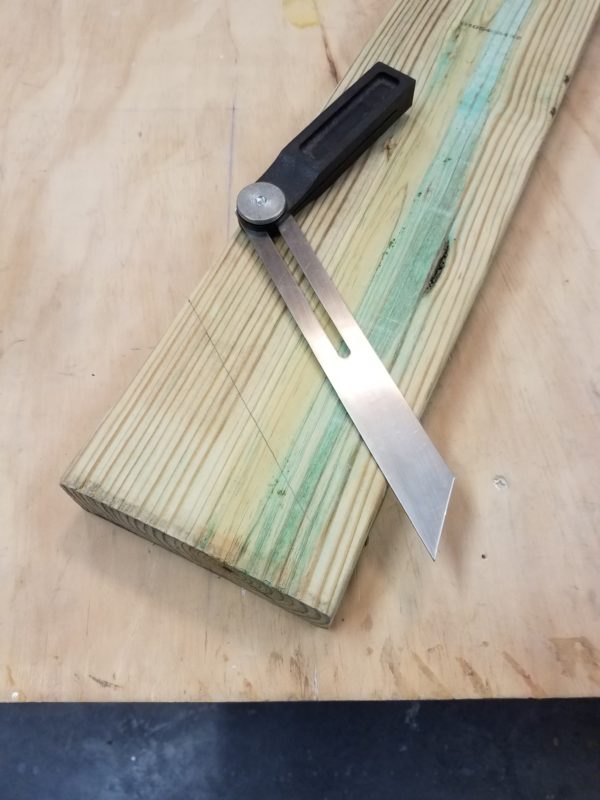 Many cuts later I had the frames for the benches done, and added a couple of supports in the center that make it nice and sturdy. I used deck screws and stainless steel lag bolts to secure everything: 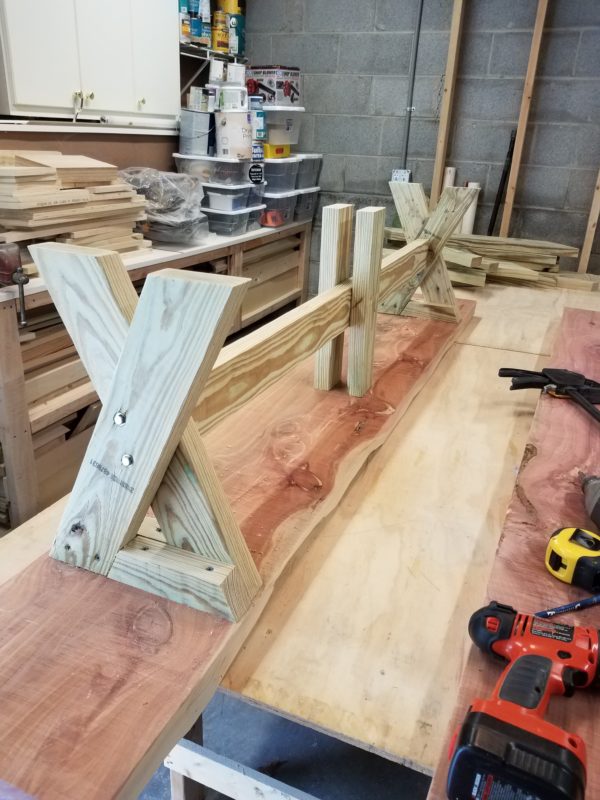 The tabletop was similar to the benches, but I wanted the slabs to have a floating look to them. Once everything was put together it’s solid with no movement: 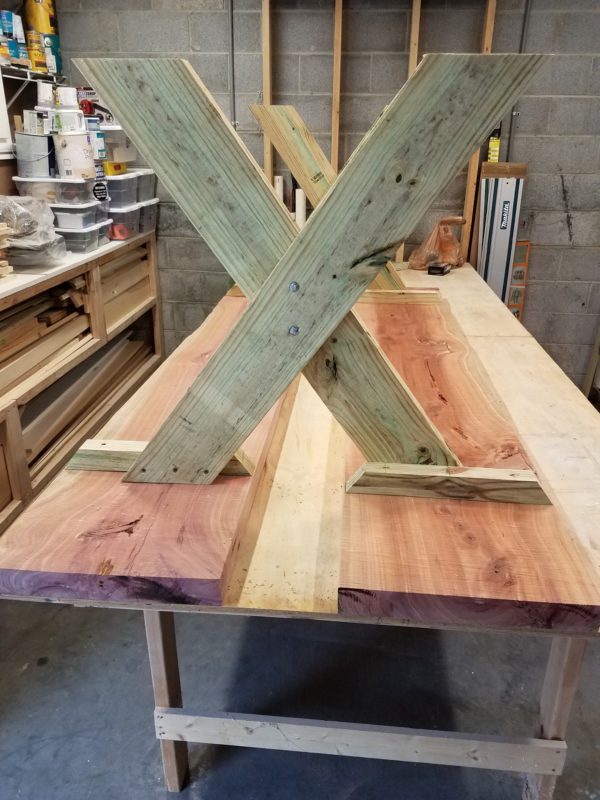 The space in between the slabs is big enough for those plastic flower boxes, which I figure can be used for flowers or to hold ice and drinks (sort of a table top cooler). But if you wanted the slabs closer together there’s only a handful of screws to undo for them to be adjusted. There is also a few inches of room to make them bigger if needed as well.

After a little more sanding and rounding edges over, here is what they looked like before finishing: 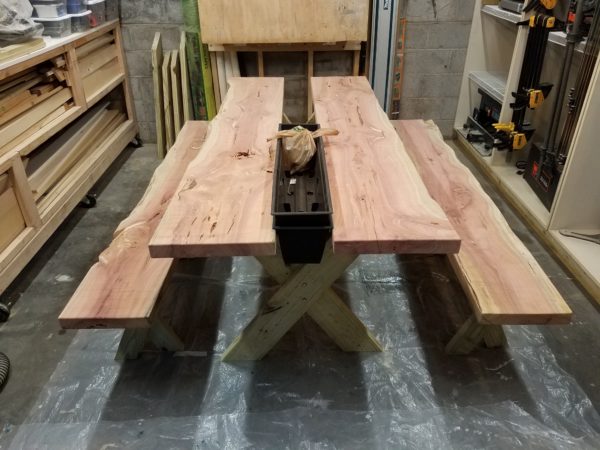 I decided to try my hand at filling the holes with epoxy resin. After watching a half dozen videos and practicing on a scrap piece I figured it would work – mix it, spread it, and hit it with a blow torch. Kinky. Here is one of the bigger holes close up: 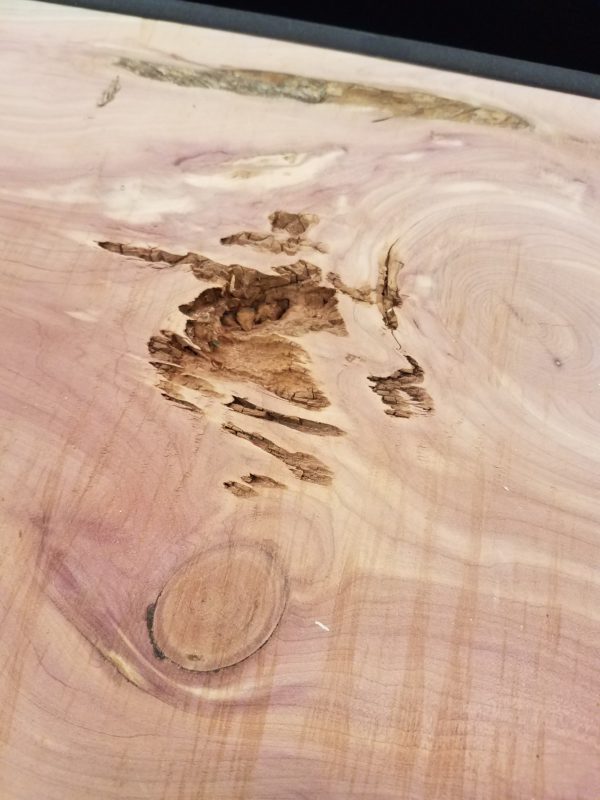 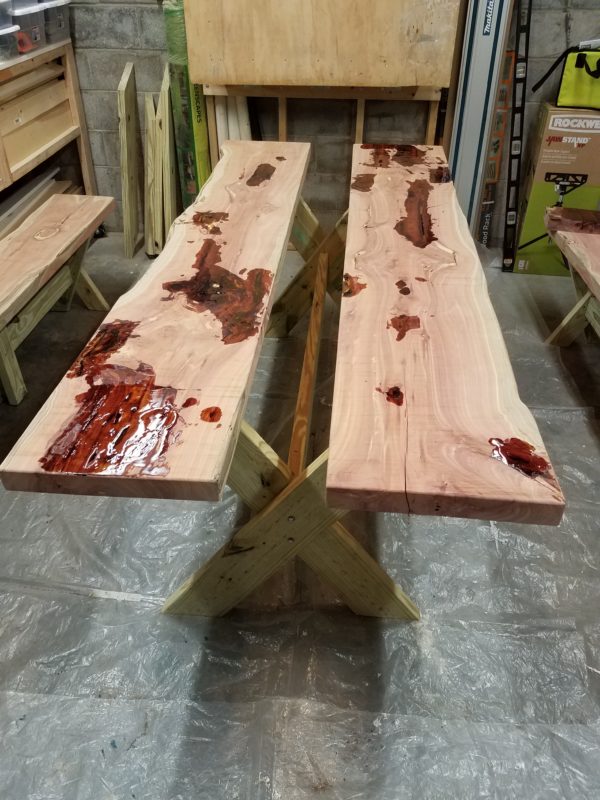 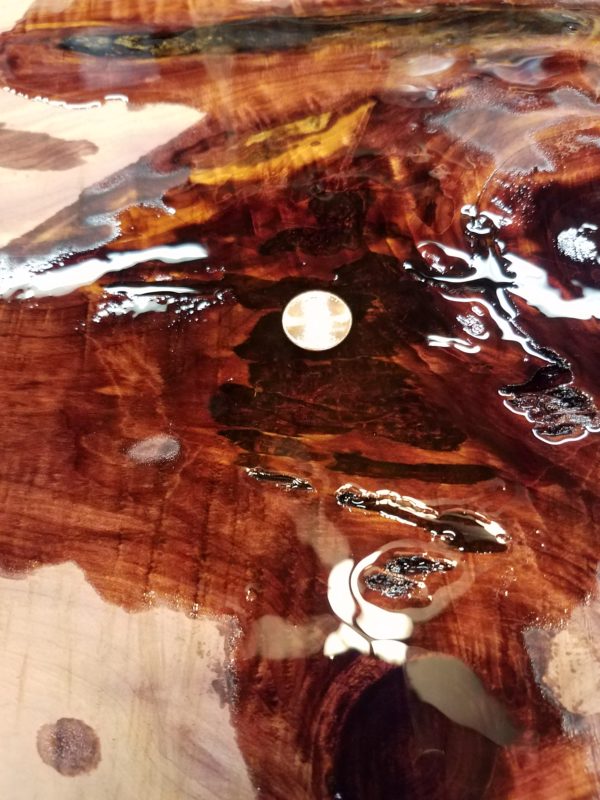 For the top coat of epoxy I just smeared it all over using my hand (wearing a glove). I tried a 6 inch putty knife, but using a hand allowed me to get the epoxy in the hard to reach places. 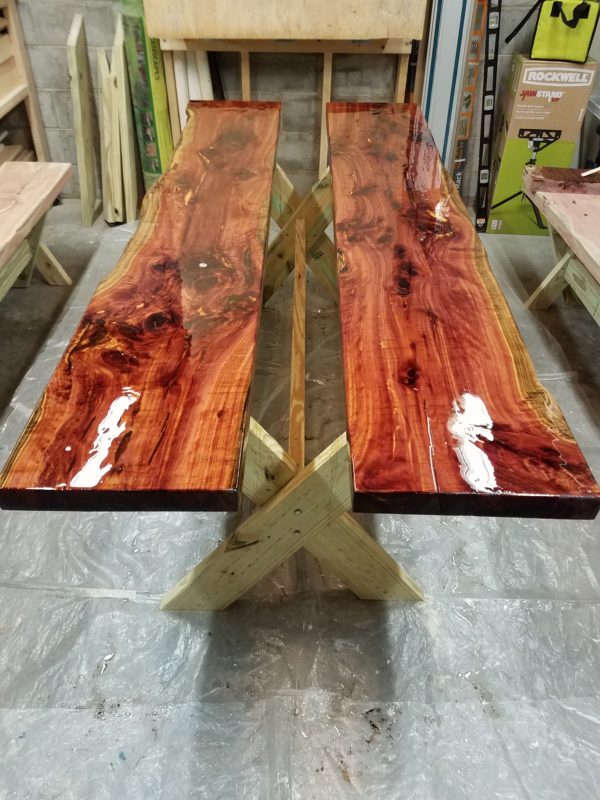 I gave the top a sanding with 120 grit, and then 200 grit sandpaper. Then, I put one additional coat of epoxy on it. The finish is okay, and there are a couple of sticky spots even a couple of weeks later. I’m not sure if it’s a spot where the 2 parts of the epoxy didn’t quite mix together well or what. I decided to put a few coats of spar urethane on the benches, which turned out a little better, even though there are some brush marks. Plus the benches are smooth and slick so it makes moving around on them easier. Here is what the final product looks like: 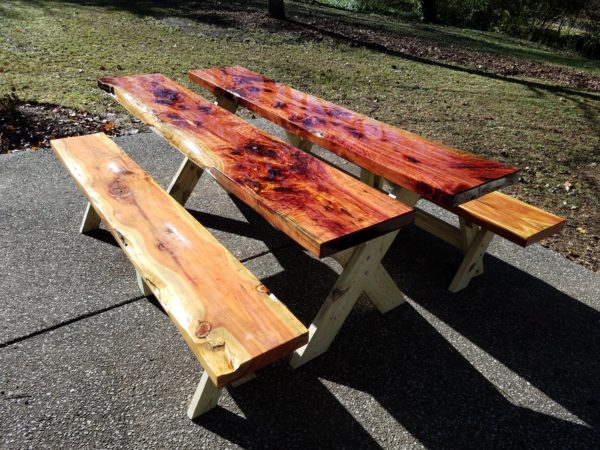 I like the epoxy better than the urethane since it leaves a high gloss finish, and more of a contrast between the sapwood and the heartwood. But the urethane is much, much cheaper. Now to finish the Murphy bed.

I have a long day ahead of packing, cleaning, and vacationing.  1100 miles in a car with three young children…

A Very Special Message From the Glibs Staff