IFLA: The True Science Edition of the Horoscope for the week of Jan 13

Today is a twofer in the ongoing esoteric education of the Glibertariat.  We have reason N+1 why I “never mention your sign” and also concrete proof of the sciencyness of astrology.

Here is the chart for Jan 18.  This in NOT the actual chart I use, but one generated by a computer (SCIENCE!) that has many of the same features and can be used as a teaching example. 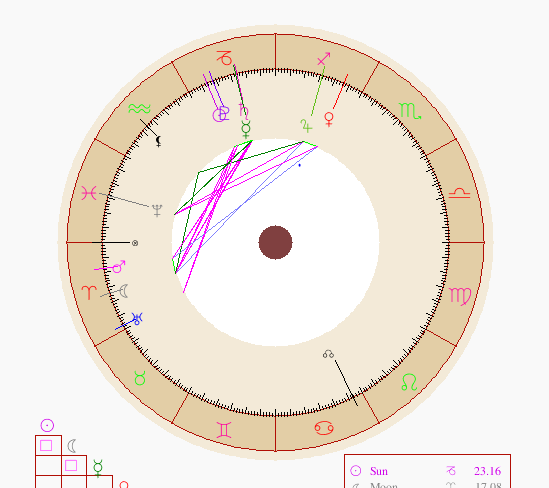 Want to know the secrets of the universe? Start here.

So obviously, you’ve got the zodiac around the edge, and the position of all the planets and a few other things marked as to where they are.  You will notice that everything falls in the range between Aries and Sagittarius.  If your sign is between Scorpio and Taurus inclusive, there is literally nothing there.  So why don’t I mention your sign?   Because you’re unimportant.  Your life has no meaning.  The cold, uncaring stars don’t even bother to look in your direction, nor do they avert their gaze.  They simply aren’t aware that you exist.  The eternal empty eons of apathy ignore you.  Only the Glibertarians love you, and you can make them love you more by donating at https://glibertarians.com/donate

“But wait!”  you may be saying “There IS something on the chart!  That weird messed-up pawn shop logo pointing to Cancer!”  Well, no.  That’s the ascending node for people born that day– it doesn’t actually exist.  But it is a great example of how astrology is a true science.

I’ve talked before how astrology was born out of inductive reasoning — taking data, matching events and signs and using them to make a model that predicts the future, just like notable scientists such as Ptolemy, Pythagoras, Brahe and Copernicus did.  But as science advanced, so did astrology.  Just as the concrete, inductive discipline of practical masonry lead to the abstract, deductive Freemasonry, so too did astrology gain a philosophical, theoretical, deductive branch.  Particle physics has “virtual particles” and “supersymmetric counterparts.”  Cosmology has “dark energy.”  These are things that might not exist, or in the case of virtual particles absolutely do not actually exist, but we keep them around because they are useful to the models and keep physicists employed.  Likewise, clients get pissed off when you tell them that there’s nothing in their sign on any given day, so astrology has developed these virtual heavenly bodies to keep the income stream going (just like any other scientist with their research grants.)  Sometimes these are actual objects (like the asteroid Ceres) with absolutely no demonstrated astrological value, and sometimes they are completely invented spots in the sky, like the Dark Moon Lilith (indicated by the black crescent and cross symbol pointing into Aquarius) but they need to exist, otherwise astrology wouldn’t work.  And since astrology works, they must exist.  Q.E. Freaking. D.

Last week’s amaze-o bad luck Rune of Ending from Wizard of Earthsea has broken up, so that’s good.  Still some reverberations from it as Saturn remains aligned with the sun and the moon leading to additional good things ending.

One of those good things that ended was Venus’s transit through Scorpio.  If you didn’t take advantage of that, too late.  This week Venus enters Sagittarius with Jupiter, so there’s an interesting double-path to good lovin’.  Your Game will be on this week (On point? On fire?  On fleek?) However, even if you don’t have Game, this is one of those rare weeks where being polite and well mannered will get you laid.

Swimming will be more difficult this week as Saturn joins the Sun and Mercury in Capricorn.  Also bad luck involving leather goods.  Lastly, someone will make a conscious effort to deceive you.

The moon and Mars are in Aries this week, bringing an extra jolt of belligerence and higgledy-piggledy.  Ares will enjoy competitive success, but also an increased risk of indigestion. This is an obvious sign that you should enter an eating contest if there is one this week.

That’s it.  We’re at the end.  Today we’ll go through the steps to make a beer starting with some malted…

Sunday Morning Links from the Road

Day 2 of The Great House Hunt. I'm trying to find one with a gila monster in the back yard…