A History of The Six-gun, Part Six

The Six-Gun as It Stands

It’s interesting to note that, aside from a few details, the only real improvements in revolvers since the mid-20th century has been in machining techniques, metallurgy and ammunition.  The “classic” Model 25-5 Smith & Wesson made today has the same lockwork and ergonomics as my mid-Seventies version; the highly-regarded Ruger Blackhawk likewise hasn’t changed much since the old 3-screw version gave way to the newer, transfer-bar action.

But the market sure has changed, and in the last twenty to thirty years gunmakers have responded with an explosion of new sixguns – and some five-guns.

Most folks prefer autos for concealed carry guns.  I’m one of those folks, normally toting around a Glock 36 on my daily errands.  But there are plenty of good compact revolvers out there suited for concealed carry as well.  And, some of the best of them have been around for a long time. 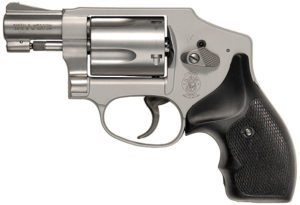 A typical snubbie, the Smith & Wesson 642

The classic, of course, is the 2” barrel, .32 or .38 caliber snubbie.  These certainly aren’t target pieces; an old friend of mine once derisively commented that the standard 2” snubnose was only useful if you were in a shootout inside a crowded elevator.  But a 2” revolver can be an effective CCW piece, especially at the ranges where such confrontations actually occur.

An example of the first is the Ruger GP-100, K-frame Smith & Wesson Model 19 or the Colt Python, all of these being full-frame .357 Magnum guns with 2 ½” barrels.  These are fine pieces, but it seems to me that, if you’re going to carry a full-size frame gun, you may as well go with more barrel.  A 4” barrel is no harder to carry than a 2 ½” one, and the added velocity and sight radius is conducive to better shooting.

The other side of the coin are the dedicated snubbies like the Ruger SP-101, the newer Ruger LCR, the six-shot Colt Detective Special and the five-shot Smith & Wesson 638 and 642 Airweights.  These are light, easy to hide in lightweight summer clothing, and most of the newer guns are capable of handling .38 Special +P ammo – not unlike Elmer Keith’s old “38-44” loads – if you’re willing to shoot a short, light gun with heavy loads.  If I were to choose a snubbie for concealed carry, it would be one of these in the latter category.

One interesting little carry wheelgun is the Charter Arms Bulldog, a 2 ½” barreled powerhouse chambered for the .44 Special.  The 5-shot Bulldog is available with an open hammer, a shrouded hammer and a double-action only hammerless version.  It’s well worth checking out if you’re not too recoil-adverse and want a concealable revolver that packs a punch.

Now the second recent trend in revolver development, one that hearkens back to the old Colt Walker, finds manufacturers going in the opposite direction altogether.

The Smith & Wesson line of X-frame monster revolvers had their genesis at the 2002 SHOT show, when Smith & Wesson’s Handgun Product Manager Herb Belin pitched the idea of a huge-framed mega-revolver to the sales staff.  The sales staff must have liked the idea, because S&W worked with Cor-Bon on ammo, and the X-frame revolver and the .500 S&W cartridge was born.  A powerhouse it is, too, launching a 400-grain bullet at 1600 feet per second.  But it’s not a holster gun; the first model 500 weighted 73 ounces, compared to 37 for a .45 Colt Vaquero or 47 for an 8 3/8” Model 29 .44 Magnum.  The X frame was visibly heavier and longer than the N-frame guns, making this monster unsuitable for casual holster carry; the release of the model 500 saw a corresponding rush by holster makers to find a way to carry the damn thing.

A few years later Smith & Wesson doubled down by offering the same X-frame in the .460 S&W Magnum, basically a .454 Casull on steroids.  Like the Model 500, this wasn’t really a holster gun.

Ruger entered the game in 2003, bringing out the .480 Ruger (actually a .475 caliber) on the 53-ounce, double-action Super Redhawk.  The cartridge was a slightly attenuated version of John Linebaugh’s .475, and the beefy Redhawk frame allowed for a six-shot cylinder even with the big round.  Here was something different; a monster-caliber handgun that was more easily portable, at least more so than the X-frame Smiths.  There is even a 2” and 4” version, called the Alaskan.  Even in this trim, the huge-framed Super Redhawk is a chore to carry around in a traditional holster and slow to clear leather.  Later Ruger brought out the .480 in the single-action Super Blackhawk, which was somewhat better from the carry standpoint. 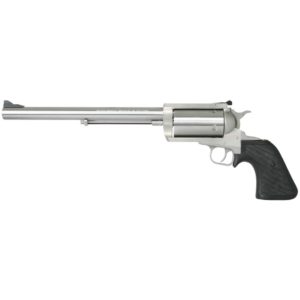 The BRF – now this is just silly.

But the king of the monsters may be Magnum Research’s .45-70 revolver, the aptly named BFR.  This is a perfectly ridiculous object, weighing in at from 4.7 to 5.3 pounds, overall length from 15” to 17.5”.  It’s also available in .30WCF, .460 and .500 S&W chamberings.  The question is “why?”  It’s only marginally handier to tote around than a rifle, and the same rounds in a carbine would be far easier to shoot well and deliver more velocity to boot.  The BFR packs a pretty good punch but is far too heavy and cumbersome to put into action quickly.  I’m hard-pressed to determine a reason for this piece.

A few years back, an outfit called Century Arms made a .45-70 revolver, but the two examples I’ve handled were of such poor workmanship that I wouldn’t care to try firing one unless I pulled the trigger with a string from a safe distance.

Monster revolvers are interesting novelties, but that’s about all I can say for them.  Further, I can’t see how most casual shooters would care to shoot them enough to develop any real proficiency.  Even the .44 Magnum is more flash and bang than some shooters care for; my son-in-law was looking to buy a .500 S&W revolver until he made a good deal on a Ruger Super Blackhawk, which he shot some and happily went back to his .357.  A sidearm is just that, a sidearm, meant to be carried all day in reasonable comfort.  I know from personal experience that my favored .45 Colt loads will lengthwise a big Iowa farm-country whitetail, and that should be enough power for most handgun work.  I’ll stick with that.  Your mileage may vary.

And, as always, there are still some odd ducks still floating around the sixgun world.

Every time period that has seen revolvers built has seen some oddball guns, and the present day is no exception.  Nowadays the oddball contingent contains two of a kind, brothers by another mother if you will:  The Taurus Judge and the Smith & Wesson Governor, but fine examples of a solution looking around for a problem.

Both (ugly, in my eye) guns are double-action revolvers ostensibly chambered for the .45 Colt, but with elongated cylinders enabling them to also chamber and fire 2 ½” .410 shotgun shells.  Why, I have very little idea. 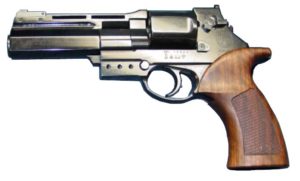 The short .410 round is of very limited use when fired from a shotgun; from a short revolver barrel, I can only see it being useful if you are shooting rats in tight quarters at very short range, or possibly for dealing with snakes.  There are slug loads for the short .410, but a standard .38 special 158-grain RNL easily outclasses them.  Buckshot?  Again, why?  Get a standard revolver, learn to shoot it well, use good quality ammo and you’ll accomplish anything that needs done.

Another odd duck is the Mateba Auto revolver.  Yes, you read that right; an automatic revolver.  The Brits made something similar back in the early 20th century, the Webley-Fosbury automatic revolver, but the Mateba is bigger, brawnier and more powerful, being available in .44 Magnum and .454 Casull.  And unlike standard revolvers, the Mateba (like the Webley-Fosbury) uses the gun’s recoil to turn the cylinder and cock the hammer for the next shot.

The standard holster gun market today is an embarrassment of riches.

The two oldest players still in the game, Colt and Smith & Wesson, are still going strong.  Colt has focused their handgun line mostly on autos, though, and today only offers two wheelguns:  The Cobra snubbie and the excellent Single Action Army, still in the market after almost a century and a half.

Smith & Wesson offers a much, much richer variety.  Ranging from compact snubbie carry guns to their “Classic” series that reproduces such great works as the Model 17 “K-22” Masterpiece, the original Model 27 “Registered Magnum,” Dirty Harry’s Model 29, and my own favorite Model 25.  Whatever your wheelgun needs, Smith & Wesson can likely supply something. 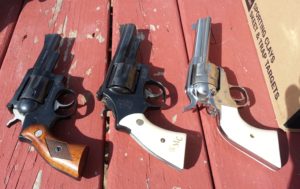 Ruger produces some great guns today as well.  The classic Blackhawk in original trim as well as a Bisley flat-top model and, of course, the 19th-century themed Vaquero and the magnum Super Blackhawk.  Ruger also provides their carry revolvers described above as well as the GP-100 series and the big Redhawk and even bigger Super Redhawk in a variety of trims.

If replicas are your cup of tea, I recommend Uberti.  This Italian manufacturer produces first-rate replicas not only of Colt’s Single Action Army but also of the Smith & Wesson #3, and a wide variety of cap-and-ball replicas too; the Walker Colt, the various Colt Dragoons, the 1851 Navy and 1860 Army as well as the 1858 Remington Army.

The wealth of modern and replica wheelgun manufacturers and models is such that the bandwidth I’m allotted won’t allow me to describe them all.  But what more fun could you have than shopping around for yourselves?  It’s a hell of a great time to be a sixgun fan.

Why do I like revolvers?  Well, there are several reasons.  Partly because I cut my teeth on one, the 1851 Navy Colt replica I described in Part 2.  Partly because it’s easier to handload for wheelguns, as case and overall load length and bullet configuration isn’t as critical.  Partly because revolvers run generally more powerful than autos of similar bullet diameter, at least autos of manageable size, and I spend a fair amount of time out in the boonies where toothy critters roam and concealment isn’t an issue.  Mostly, though, it’s just because I like them.  I wouldn’t surrender by 25-5 Smith for all the tea in China.

This has been great fun to research and write.  Now that I’m done talking six-guns, I’m sort of wondering what to do next.  Something I’m fond of, to be sure; a history of lever guns?  American made double shotguns?  An in-depth bio of John Browning or Paul Mauser?  I’m not entirely sure.  Maybe I’ll just crank out a few more anecdotes of life in Allamakee County in the Seventies in the meantime.

I guess you will all just have to wait and find out.

I saw a need for link -pinch - hitting (due to weather, move, etc). So I offered, and the offer…

[caption id="attachment_21027" align="aligncenter" width="199"] You will have a hard time topping that headline.[/caption]   Grüezi mitenand. This morning's links are brought…