IFLA: The Scientific Experiment Edition of the Horoscope for the Week of Feb 3

This week we are going to do some SCIENCE!

Purpose:  To increase the personalization and granularity of divinatory results for the Glibertariat.

Background:  The stars shine upon us all, rendering astrology suitable for predicting events occurring to multiple people simultaneously.  However, the skies only speak to and about persons above a certain threshold of relevance.  Also, Glibs bitch when their sign isn’t mentioned.  Tarot reading provides excellent results on an individual level, though the quality of the results varies greatly with both the skill of the reader and the relationship between the reader and the subject, typically established to be as follows: 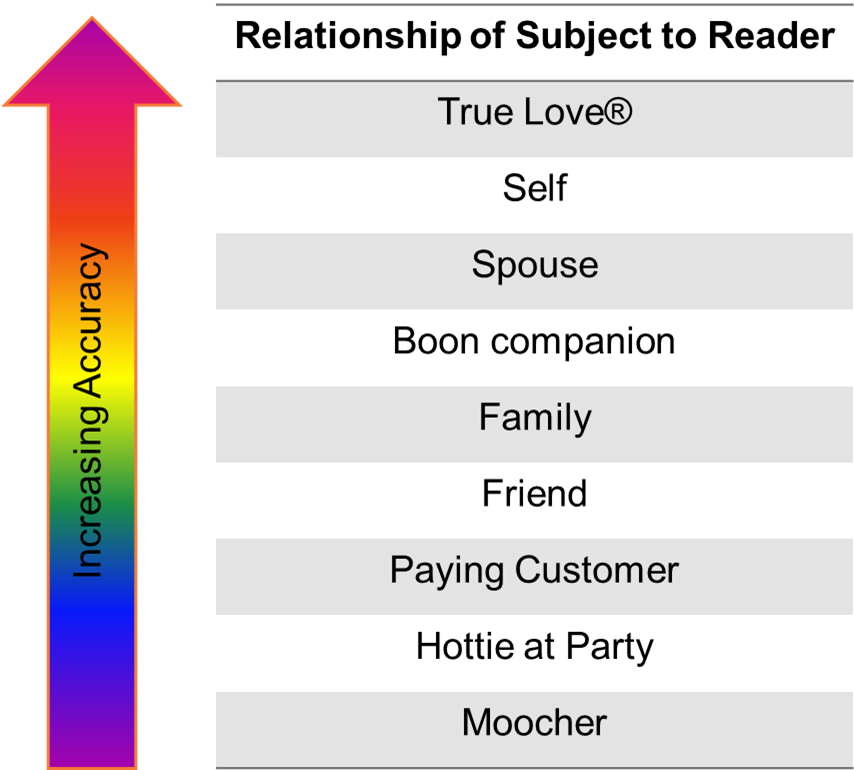 However, the mechanism by which the Tarot works as a divinatory technique is completely separate from the functional principles of Astrology, the latter resulting from the Celestial Emanations from beyond (but also including) the Lunar Sphere, while the former relies on the individual’s Deep Intuition and the universal connections of the Forza Vitae between individuals.  As such, Tarot has not been proven reliable on a collective scale.

Technique:  Each week, a single tarot card will be drawn for each astrological sign and the result revealed for interpretation by the individual Gliberatus/a/x.  Initially, the deck chosen will be the Rider-Waite, but will transition to the Glibertarian Tarot once such a thing exists.  Merging the two contradictory techniques this way will create a harmonic resonance in much the same way that adding 4 (earth) to 3 (sky) yields 7 (perfection, magic).  In addition this combination of incompatible auguries is particularly suitable for the Glibertarian penchant for impurity, hybridization, miscegenation and sodomy.

Data:  Customer responses in the Sunday noon post will be evidence of the usability of the provided cartomancy.  Data collection will continue for an unspecified number of weeks with analytics performed at irregular intervals.

Ok, now that you all know what’s going on, here’s what you have to work with:

Aquarius plays host to the Sun and Mercury this week.  Expect surprises, suspense, anticipation… basically the good aspects of chaos or uncertainty.  Much like last week, Jupiter in Sagittarius protects those who do right, so a karmic bonus with the stuff going on in Aquarius.  You’re going to need that however, since Saturn and the waning Moon in Capricorn portends that you are going to make an unusually stupid mistake.  You may make this mistake because it will be easy to be belligerent, what with Mars being in Aries and all.  However, it also means that a direct approach to problems will be successful.

So that’s the overarching (literally) state of the universe.  What about for you in particular?

Aquarius – Wheel of Fortune.  Good luck.  Combined with that whole Mercury/Sun thing you’ve got going on, this is the week to take a trip to Vegas.

Taurus – Strength.  This means strength.  Sometimes a cigar is just a cigar.

Gemini – 3 of Wands. This signifies that I probably need to shuffle the deck better next time.  Also stability, commerce and discovery.

Virgo – 4 of Wands.  Harmony and prosperity.

Capricorn – 6 of Swords.  Journey by water.