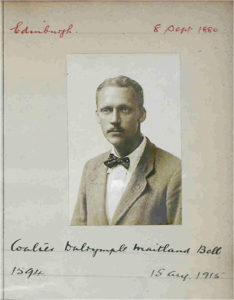 See the sedate, mild-mannered looking guy to the right?  He looks like a banker, maybe, or an accountant; maybe a shopkeeper.

Who he was, was something very different. This 1915 photo depicts Walter Dalrymple Maitland Bell, a Scottish adventurer, big game hunter, prospector, fighter pilot, competition sailor and one of history’s premiere badasses, and the first in a series of Profiles in Toxic Masculinity.

I use this term ironically, of course.  All the subjects to be portrayed in this series are products of their time and should be judged accordingly.  In today’s world, though, there is a distinct tendency to downplay the value of general ballsiness, and I intend to choose the subjects of this series by one standard:

They must have had grit.  True grit.

Bell had that and more.

Born in 1880 to a wealthy family of mixed Scots and Manx descent, Bell lost both parents before his tenth birthday.  His older brothers attempted to raise the fractious youth but, after the young Bell was ejected from several schools, he decided that a posh life on a luxurious Scottish estate wasn’t for him and ran away to sea.

At thirteen years of age.

In 1896, having evidently found life at sea tedious, the young Bell turned up in Uganda, where a railroad building crew was being pestered by lions, who liked to snack on their workers.  The railroad wanted someone to help with the lion problem; the sixteen-year-old Bell had a single-shot .303 rifle, and so said to the railroad “hold my beer” and proceeded to slaughter the man-eaters.

Remember marveling at the fortitude of the two guys depicted in the 1996 film The Ghost and The Darkness?  Bell did the same thing.  Only instead of two lions, he killed a mess of them.  Alone.  With a single-shot rifle.  In a caliber normally considered good for deer.  At age sixteen.

Eventually the task of hunting down slavering 500-pound apex predators with a taste for human flesh got too boring for the young Bell, so he determined to go halfway around the planet to join the gold seekers in the Yukon Gold Rush.  But it turns out that gold-seeking was about the only thing that the young Bell couldn’t get the hang of, so after enlisting a partner to equip him he went back to what he did best:  Killing things, in this case spending the winter of 1897-98 shooting deer and moose to keep the denizens of Dawson City eating.  For that purpose, he had obtained a .35 caliber Farquharson single-shot rifle, but when spring came his partner absconded with the cash from the winter’s hunting, leaving Bell with nothing but the rifle and the clothes he stood in.  A letter to his family seeking funds to return to Africa yielded nothing.

The now nineteen-year-old W.D.M. Bell wasn’t about to let the mere condition of poverty keep him from going where he wanted to be, namely, halfway around the planet (again) to Africa.  So, he did what any young man of gumption would do under the circumstances:  Joined the Canadian Mounted Rifles.  At this time the British Empire was pulling in men from all over to fight a bunch of pesky Afrikaans guerillas in the Second Boer War, so much to his satisfaction, Bell soon found himself on a ship back to Africa.

In South Africa Bell discovered his was just as good at shooting Boers as he had been at shooting lions, at least until he had a horse shot out from under him and was taken prisoner.  Being a prisoner of the Boers evidently bored him as much as hunting down man-eating lions by himself, so he escaped, made his way back to the British lines and served the rest of the conflict as a scout.

But it was after the Boer war that Bell embarked on the career that would make him famous.

The Boer War ended in 1902.  W.D.M. Bell found himself unemployed, but he had a rifle, he had his wits, he had his enormous pair of solid brass balls; so, he did what any enterprising young man of 22 would do and became a professional ivory hunter. 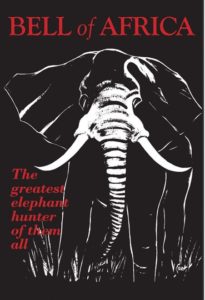 Remember what I said about judging people by the standards of their time?  As a young tad, reading the works of such lights as Ruark, Hemingway and Capstick, I often thought of one day hunting elephants.  Nowadays, knowing what I do of the intelligence, social structure and empathy of pachyderms, I don’t think I could bring myself to shoot one.  And there can be no doubt that the ivory trade did great damage to the elephant herds of Africa in the early 20th century.

In 1902, though, the ivory trade was in full sway.  The enormity of the Dark Continent made the supply seem inexhaustible.  Bell waded into the business and, as was usual for him, eschewed the popular wisdom and did things his own damn way.  His favorite elephant rifle wasn’t a big-bore double as was popular at the time, but rather a 98 Mauser chambered in the .275 Rigby – better known as the 7x57mm Mauser.  He also used a single-shot .303 British rifle and a Westley-Richards bolt gun chambered in the .318 Westley-Richards.

Using such light rifles on elephant presented a considerable challenge, but Bell was up to the task, experimenting with various angles and examining the skulls of slain beasts until he perfected the “Bell Shot,” a difficult shot angling from the beast’s rear, putting the small-bore full-patch slug through the neck muscle into the brain.  He was an expert with his chosen rifles, having once been observed shooting fish jumping from a lake as well as shooting birds on the wing.

In his career Bell killed over a thousand elephants, all bulls but 28.  He once estimated that he walked over seventy miles for each bull killed, which makes an impressive total and no doubt used up a lot of good shoe leather.  In the course of his travels he also killed over 800 Cape buffalo and countless smaller game for camp meat and hides.

It was during this time that he hunted in the lawless wilderness in northern Uganda that was known as the Karamojo; he was thereafter known as “Karamojo” Bell, a name that would accompany him into the broader fame that awaited.

Karamojo Bell hunted from 1902 until 1915.  If that date rings a bell, that’s because there was an event going on in Europe at the time, one big enough to draw W.D.M. Bell away from hunting all over Africa; that event was, of course, the Great War.

In 1915 Bell laid aside his elephant hunting rifles and headed for England, where he talked his way into pilot training.  Given that this was a time when aircraft were made of wood and canvas and had engines only slightly more reliable than the parking brake on a rowboat, that took guts, but I think we’ve already established that Bell had a surfeit of those.

His first wartime posting was back in Africa, where he served as a reconnaissance pilot in Tanganyika, spying on German East African troops from above and sometimes leaving his observer behind so he could take potshots at German aircraft from his unarmed recon plane with a hunting rifle.  But as the war in Europe heated up, he was assigned first to Greece then to France, where he shot down several German aircraft – and, by mistake, one French one.

By war’s end, Bell had five Mentions in Dispatches, but had fallen ill for the first time – what lions, elephants and German pilots failed to do, a case of “nervous asthma” did.  The illness succeeded in taking Bell out of action for a brief time, allowing him enough time at home to marry one Kate Soares, the daughter and sole heir of Sir Ernest Soares. 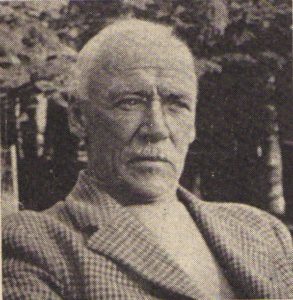 After the war, Bell went back to Africa only briefly; just long enough to knock out a 3000-mile canoe trip through the Gold Coast and Liberia.  He then retired to Corriemoillie, his 1,000-acre highland estate at Garve in Ross-shire, Scotland.  But retirement say heavily on Karamojo, so he and Lady Kate decided to become competitive racing sailors, commissioning the steel hulled racing yacht Trenchmere and competing in cross-Atlantic races until the outbreak of the Second World War put an end to the fun.

During his life he managed, somehow, to write three books on his adventures; The Wanderings of an Elephant Hunter (1923), Karamojo Safari (1949), and Bell of Africa (1960).  All are, of course, highly recommended reading.

Walter Dalrymple Maitland Bell suffered a heart attack in 1947 which confined him to his Scottish estate.  He passed away in 1954, full of years and tales of adventure.  A sailor, hunter, soldier, fighter pilot and general badass, Bell was of a type not often seen today; his good friend, the American Colonel Townsend Whelen, may well have been speaking of Karamojo Bell when he said “Unless a man has considerable skill with and reliance in his weapon, he will not remain cool in the presence of dangerous game close by.”

Karamojo Bell had that and then some.

[caption id="attachment_16223" align="aligncenter" width="225"] A PROPER COSTUME[/caption]   ZARDOZ SPEAKS TO YOU, HIS CHOSEN ONES. THE FLORIDA CHOSEN ONE IS…

Good morning my Glibs and Gliberinas!  And what a glorious morning it is for Democrats as Cohen is set to…