A History of Lever Guns, Part One

In the early years of the nineteenth century, there was a lot of innovation in the world of firearms.  In my recent series on sixguns, we examined the results of that innovation, but there was, of course, a lot more happening in other aspects of the gun trade.

All this innovation had its genesis in one thing:  The percussion cap.

Prior to this, all guns used the flintlock mechanism, which evolved from the flint-and-steel snaphaunce locks and the earlier pyrite-and-steel wheellock guns.  These guns, apart from the excessively complex Collier revolver, relied on multiple barrels for multiple shots.  The early percussion era continued this trend for a few years until the 1836 invention of the Paterson revolvers by Sam Colt.

The revolver mechanism, however good for sidearms, doesn’t lend itself well to long arms.  Why not?  Because the cylinder gap in a revolver has the tendency to vent hot gases and, if the gun’s timing is a tad off, to spit hot lead shavings.  That’s not good on the non-firing arm which, in a normal stance, is positioned near that cylinder gap.

Enter a fellow named Walter Hunt.  In 1848 Hunt, a quick-witted New Yorker who invented such things as the safety pin, the lockstitch sewing machine, the first streetcar bell and street sweeping machinery, also invented the Rocket Ball self-contained cartridge.  Hunt effectively did what gun cranks ever since have been trying to do; he invented a caseless rifle cartridge.  The Rocket Ball cartridge was a conical bullet with a hollow base, into which was packed black gunpowder; the whole shebang was sealed with a wax cap with a small hole to allow in a spark for ignition.  The Rocket Ball cartridge combined with a firearm to shoot it resulted in a real mouse gun, delivering rather less muzzle energy than a modern .25ACP pistol cartridge.  It was a practical self-contained cartridge, though, suitable for feeding from the magazine of a repeating rifle.  This was the very thing inventors needed to build the first magazine rifles.

The Rocket Ball was of extremely limited usefulness.  Other than being a self-contained cartridge it really had nothing going for it.  It was not powerful enough for hunting anything more robust than a songbird or perhaps an undernourished rabbit.  Some professional and even amateur troublemakers were rumored to fear an underpowered gun more than a full-strength piece, as a full-power gun would generally go through-and-through, resulting in a relatively clean wound; on the other hand, the weaker round would plant a slug in one’s chest, dragging the grease, fouling and (usually dirty) clothing of the shootee along with it.  Bear in mind this was well before the advent of modern surgery and antibiotics, so the implanted slug and it’s accompanying junk would stay in place, where the wound would suppurate and fester, often resulting in a very unpleasant death.

By and large, though, the Rocket Ball ammo was pretty much worthless as anything more than proof of concept.  The concept it proved, though, was to have long-lasting implications.

Walter Hunt wasn’t finished.  He had his Rocket Ball ammunition; now he needed a rifle to fire it.  After some tinkering, he came up with a repeating rifle design that used a tubular magazine under the barrel, with an underlever to lift cartridges into the chamber.  As the first Rocket Ball cartridge had no primers, Hunt used an external percussion cap, just like the front-stuffers of the time.  After firing, the shooter was required to work the lever to bring a new Rocket Ball into the chamber, place a new cap on the nipple, and then was able to discharge the piece again.  This operation, while cumbersome by today’s standards, was still much faster than reloading a muzzle-loading piece.

Hunt lacked funds to develop his “Volitional Repeater,” and so sold his patents to a man named George Arrowsmith.  Very little is known about Arrowsmith other than the fact that he had an employee named Lewis Jennings, who slicked up the action of the Volitional Repeater; Hunt then marketed it as the “Jennings Magazine Rifle.”  It wasn’t a bad piece outside of its cartridge; one oddity was its combination of the action lever with the trigger, which would give any modern gun-safety advocate a bad case of the galloping collywobbles.

Probably in large part because of its weak cartridge, the Jennings rifle didn’t blow up a lot of people’s skirts.  Only a few prototypes were made, one of which is in the NRA Museum today.  Still, it was innovative enough to attract the attention of two gentlemen we’ve met before in our discussions of firearms history. 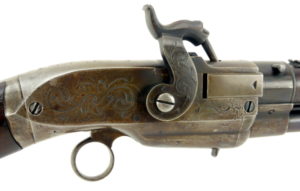 The Smith- Jennings action close up

One of the few customers for the Jennings Magazine Rifle was a fellow named Courtland Palmer, who purchased some Jennings repeaters for his hardware store and, eventually, also purchased the patents to those rifles from Arrowsmith.  Palmer had two employees who were keenly interested in seeing this new repeater, and they promptly set about tinkering with the design, resulting in the 1851 introduction of the “Smith-Jennings Repeating Rifle.”  In case you haven’t yet guessed, “Smith” was Horace Smith, and the other interested party was Daniel P. Wesson.

Fewer than 2000 Smith-Jennings rifles were ever made.  Those guns command some fancy prices today if you can find one; shooting an original would be out of the question even if ammo were available, and nobody (rightly so) has seen any real reason to build a replica.  But Smith & Wesson weren’t done with the design.

One of the perceived problems with Hunt’s original Rocket Ball cartridge, aside from its rather pathetic power level, was that it wasn’t really a self-contained cartridge.  The Jennings and later Smith-Jennings repeaters still required the shooter affix a percussion cap after levering a fresh round into the chamber.  Also, the opening of the Rocket Ball cartridge that admitted the spark also admitted other things, like grease, dirt, and moisture.  Smith & Wesson did the obvious; they improved the Rocket Ball by adding a fixed primer at the base of the cartridge. 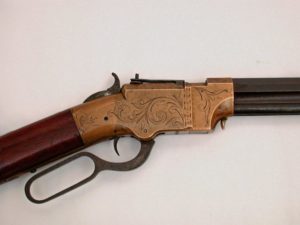 The redoubtable pair left the employ of Mr. Palmer and set up shop in Norwich Connecticut, originally as “The Smith & Wesson Company” but later, on the addition of a couple of investors, changing in 1855 to “The Volcanic Repeating Arms Company.”  The Volcanic rifles and pistols, both using an adaptation of the Smith-Jennings lever action, was the result of that action.

In the Volcanic rifle, the form of the lever-action rifle was finally set:  A rifle with a tubular magazine under the barrel, a finger lever that lifted fresh cartridges into the chamber and operated the bolt, a trigger separate from the lever and an external hammer.  The Volcanic guns were still bound by the limitations of the pathetic Rocket Ball cartridge, but they were quick to load, quick to shoot, had a decent ammo capacity and used a truly self-contained cartridge, making them the first truly effective mass-produced repeating rifle.

But there just wasn’t a big market for the Volcanic.  A traditional percussion-fired muzzle-loader was even more reliable and far, far more powerful.  The militaries of the world were still almost universally using front-stuffing muskets and rifle-muskets, partly because they were solid and reliable, partly because they were easier to train poorly educated conscript soldiers in their use.  Mountain men, sport hunters, and pot hunters after big game wouldn’t consider the Volcanic; it was just too weak. 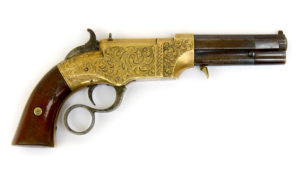 The Volcanic company only lasted a year, closing their doors in 1856 when one of their financial partners finally forced the failing company into insolvency.  Once again, Volcanic had produced something that was pretty much worthless except as proof of concept.  Once again, the concept they had proved was to have long-lasting implications.

On the failure of Volcanic, Messrs. Smith & Wesson decamped to purchase Rollin White’s patent and form the “Smith & Wesson Revolver Company,” now enshrined in history and amply described in the late series on the History of The Six-Gun.

Meanwhile, the Volcanic financial partner who administered the mercy shot to the moribund Volcanic company took the remains of that organization to New Haven, Connecticut, renaming it the New Havens Arms Company.  That worthy’s name was Oliver Winchester, and in 1857, he hired a plant manager named Tyler Henry.  Winchester wanted the Volcanic rifle design upgraded and adapted to the newfangled brass rimfire cartridges that were just then becoming the big new thing.  “Hold my beer,” Henry told Winchester, “…and watch this.”  The fruit of that business union was to yield great results.

Only three years later the southern United States grew fractious.  Former lever-gun builders Smith & Wesson were not to play a great part in the weaponry supplied for that contest of arms, but Winchester and Henry would prove to play a larger part.

But that’s a story for Part 2.

Yeah. I've been busy as shit today and have nothing to show for it. Well, I have an appointment to…

Good morning my Glibs and Gliberinas!  And what a glorious morning it is for everyone except Alabama and Georgia residents…