No, Not That Henry – the Original Henry

In 1857 Oliver Winchester had taken the remnants of Volcanic to New Haven, Connecticut, where he reformed the manufactory as the New Haven Arms Company.  He employed a new design guy, and that designer, Benjamin Tyler Henry, designed a rifle and cartridge that significantly improved on the Volcanic. 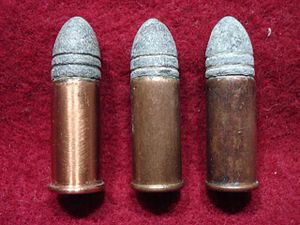 First, the cartridge:  The copper-cased .44 Henry Flat rimfire cartridge was anemic by today’s standards, firing a 200-grain lead bullet at 1125 fps for a muzzle energy of 570 ft-lbs.  But compared to the old Rocket Ball ammo fired by the Jennings and Volcanic repeaters, the .44 Henry was a real powerhouse, roughly the equivalent of the modern .45ACP; here, at last, was a repeating rifle cartridge with enough power for medium-sized game at close range and even for work against two-legged antagonists.

Second, the rifle:  The brass-framed 1860 Henry retained the better features of the Volcanic, namely, the tubular magazine, the large underlever with a separate trigger, the external hammer, and front and rear sights mounted on the barrel, although a tang sight was also available on the Henry.  The Henry’s tubular magazine was the first “high-capacity” magazine to be mass produced.  Henry rifles were favored by skirmishers, scouts, and cavalry during the War of the Northern Aggression, and many a common soldier saved his pay to buy one, back in those innocent times when a soldier could bring his personal weapon to the fray.  A Confederate soldier named John Singleton Mosby famously (and apocryphally) said that the Henry “let the Yankees load up on Sunday and shoot at us all week.”

Some 14,000 rifles were built by the New Haven Arms Company during the war, and a great number of these found their ways into the hands of soldiers, who quickly learned the advantage of rate-of-fire.  The Rebels managed to get ahold of a handful of Henrys, mostly by capture, but the Confederacy’s arms industry couldn’t scrounge enough copper to replicate any useful amounts of the .44 Henry cartridge.  So, the Henry’s advantages were mostly realized by the North, who used it along the Spencer repeaters and various single-shot breechloaders.  This was the first en masse use of repeating rifles in a major war.

It is one of the greater ironies of the gun world that a company today, calling itself Henry, makes lever guns with a very similar weakness.

The Henry rifle had a successful run, but when the War Between the States finally wrapped up in 1865, a nation looking West was going to need repeating rifles and plenty of ‘em.

A year after the end of the War of The Northern Aggression, Oliver Winchester was (for reasons I have not been able to determine) in Europe.  His employee Henry, apparently disgruntled with his compensation, petitioned to have the Connecticut Legislature seize the New Haven Arms Company and turn it over to him.

Oliver Winchester returned home and put a stop to this early attempt at crony capitalism by reorganizing the New Haven Arms Company into something bigger, better and Henry-less.  He gave this new organization his name: The Winchester Repeating Arms Company.

As part of the reorganization, Winchester caused the basic Henry rifle to be redesigned.  The new rifle, released in 1866, was the first rifle to carry the Winchester name; it differed from the Henry in having a bronze-alloy frame instead of brass, and in loading through a gate in the side of the receiver.  This innovation allowed for the addition of a wooden fore-end to make the rifle easier to handle while making it possible for the magazine tube to be completely sealed against the elements.

In the 1866 Winchester the basic form of the lever-action rifle was complete; a sealed tubular magazine that loaded through a spring-loaded gate in the side of the receiver, a trigger separate from the lever, an external hammer and sights on the barrel.  This pattern would remain the standard until the very last years of the 19th century.

But the 1866 retained the Henry’s .44 rimfire cartridge.  Settlers, guntwists and other folks moving West were going to need more power in a repeater.  Just a few short years after the introduction of the 1866, Winchester was set to give it to them. 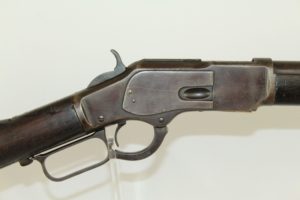 If the year 1873 rings a bell, it’s because we looked at it in the recent series on sixguns.  That was the birth-year of a true American legend in sidearms, the Colt Single Action Army.

1873 was also the year Winchester released the next iteration of the lever gun, the steel-framed 1873.  This rifle used the same toggle-link action as the 1866 Wincheste, but had a beefier, stronger steel frame.  Best of all, it used a new, more powerful centerfire cartridge, the .44 Winchester Center Fire (WCF) later known as the .44-40 Winchester. 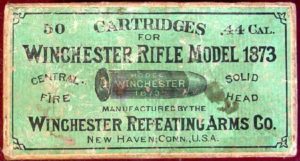 The real genius of the 1873, though, was in its alliance with that famous revolver that introduced that same year.  Colt quickly began building the Single Action Army in .44WCF, calling that version the “Frontier Six-Shooter.”  Remington quickly followed by building their 1875 revolver chambered for the .44WCF.  Now, a horseman, prospector, lawman or outdoorsman could carry one cartridge for both rifle and revolver.  The system was well-regarded and received enthusiastic endorsements from such folks as William F. Cody.  There was even a movie made about the ’73 Winchester, starring Jimmy Stewart and Shelley Winters and co-starring a “One Of One Thousand” special-edition rifle.  This set a trend of movies where an actor shares top billing with a rifle, a trend that continued with such films as Carbine Williams and Quigley Down Under.

Today, despite the large number of guns built, original 1866 and 1873 Winchesters command some fancy prices.  Fortunately for the hobby shoote,r there are several companies making replicas, and some offer varieties not seen in the original guns, like chamberings in the popular .357 and .44 Magnums as well as the venerable old .45 Colt.  I’ve handled a couple of these guns and shot one, a Uberti 1873 carbine replica in .45 Colt.  They retain the feel of the originals while employing better metallurgy, closer tolerances and using more powerful ammo.

It was ammo, in fact, that led to the next major innovation to come out of the New Haven works.  While the 1873 was solid, reliable and (for its time) accurate, it still fired a handgun cartridge.  The .44 WCF was an order of magnitude more powerful than the .44 Henry Flat it replaced, but the sportsman afield after elk, moose or bison was still pretty much bound to a single-shot like the Remington Rolling Block and, of course, the Sharps.

So far no truly successful repeater handling full-power cartridges like the .45-70 was being mass-produced.  That left a big, gaping hole in the market.  Shooters wanted a repeating rifle with some thump, and Winchester was about to let them have it. 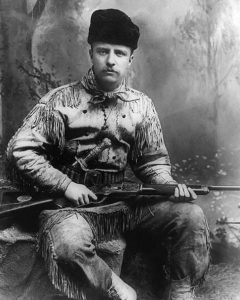 The young Roosevelt with his Centennial rifle.

Until 1876, the outdoor adventurer faced with two bison would have nothing more to do than look down at his Sharps or Remington single-shot rifle and pick one bison to shoot.  But after Winchester introduced the Model 1876, he could shoot both!

The 1876 was an 1873 Winchester writ large, retaining that basic toggle-link design in a bigger, heavier frame capable of handling full-length, full-power rounds.  The ‘76 was introduced in the Winchester .45-75 cartridge, loading 75 grains of black powder behind a 500-grain .45 caliber bullet, delivering that thump that shooters were looking for in a repeater.  Four versions were offered; the 22” barreled carbine, the 26” Express with a half-length magazine, the 28” Sporting Model and the 32” Musket.

Not only sportsmen found the ’76 appealing.  The Canadian Mounties bought a number of them, as did the Texas Rangers; Geronimo was in possession of a ‘76 when he surrendered to the Army in 1888.  The “Centennial” Winchester even caught the eye of a certain young New York whippersnapper name of Theodore Roosevelt, who had come west to try his hand at ranching.

The ’76 was popular enough, but despite Winchester’s expansion of its loadings to include the .40-60, .45-60 and .50-95 rounds, the ’76’s toggle-link action still wasn’t quite long enough to handle the popular .45-70 Government rounds, meaning that users had to depend on Winchester’s proprietary ammo.

The Centennial represented the last of the first-generation Winchester rifles.  The company continued making the ’76 until 1897, but well before that, it was overshadowed by a new generation of Winchesters.  This first generation saw its heyday but of late has seen something of a renaissance, as several manufactories have resumed production of the 1866, 1873 and 1876 Winchesters.  These new guns, made with modern metals, modern manufacturing techniques and firing modern ammo, would drive any 19th century hunter, gunslinger or cowboy green with envy.  It’s a testament to their lasting design that they are still useful on the range and in the field.

Oliver Winchester died in 1880 at seventy years of age.  Ownership of the Winchester Repeating Arms Company passed to his son, William Wirt Winchester, who died four months later of tuberculosis.  William Winchester’s widow, Sarah Winchester, believed the family was cursed by the spirits of people killed by Winchester rifles, and so moved to San Jose, California and used her portion of the inheritance and income from the Winchester Repeating Arms Company to open the Winchester Mystery House.  This house was intended to confuse and discombobulate those spirits who were (perhaps understandably, if you believe in that sort of thing) peeved at having been sent to their rewards with the products of the New Haven gunmakers.  The Winchester House still stands in San Jose; that area is still known for anti-gun sentiment and general kookery of all sorts.  It is interesting to reflect that a Winchester and Winchester money may have started off the trend of Bay Area lunacy.

Winchester Repeating Arms Company continued humming along, though, and three years after Oliver Winchester’s death, big things were to happen.

Winchester had a fair amount of competition from the late 1850s through the late 1890s.  In 1860 Christopher Spencer brought out a solid, rugged repeating rifle that used an underlever to operate the gun but was nevertheless very different than the Henry and Winchester offerings.  Later, in the mid-1870s, a man named John Marlin entered the gun trade, building an inexpensive pocket revolver, a few shotguns – and lever-action rifles.  Marlin’s guns sold for a bit less than Winchester offerings but were good, solid, accurate rifles for their time.  A few other makers get involved as well, including classic six-gun maker Colt – but that’s a story for Part 3.

Meanwhile:  The folks at Winchester had a plan, a plan that was so clever you could paint it red and call it a fox.  As of 1883, they had a brand-new partnership with a certain gun designer out of Ogden, Utah, fellow name of John Moses Browning.  That relationship with the DaVinci of Firearms would prove long and profitable for both parties.  Some honest-to-gosh American firearms legends were about to start rolling off Winchester’s lines, and American shooters would be richer for it.  More on that in Part 4.

It appears that the SMITH family and ZARDOZ are going to "let" me do the afternoon links today. And before…