It was 1998 or so, I can’t place it exactly.  My friend B worked for a company with a client in Southern Indiana.  He heard from some co-workers about this place with really good pizza and an unheard of beer selection.  As a fan of craft beer, such as it was in Kentucky at the time,  it sounded like a place worth the trip.

Before the rest, here is a little backstory, as best as I understand it.  There was a sports bar called Sportstime Pizza.  Not a creative name, but it was exactly what it was.  They served the expected BMC beers, in regular and light versions, along with a better pizza than you would expect.  Their specialty was a deep dish that is closer to Detroit-style than Chicago-style, but not quite that either.  Let’s just call it New Albany style pizza, because I have never run into exactly it anywhere else.  The son-in-law of the owner convinced the father-in-law to let him open the space next door in the strip mall.  They would share the kitchen and the new place would serve craft and foreign beers.  At the beginning, they served Bud, Miller, and Coors, but never light beer.  Or Lite.  There wasn’t much at first, I think for the first month Guinness was the only option.  But by the time of this story, Rich O’s, as the place was called, had an extensive list of American craft and foreign beers, on bottle and on tap.  A death and a divorce later, the two daughters and an ex-husband would combine them into one name, New Albanian Brewing Company.  But everyone still calls the two sides Sportstime and Rich O’s.

Back to the story, as I knew none of that at the time.  I was enjoying good pizza and good beer, trying some beers I had never had before, but in styles that I was comfortable with.  I wasn’t pushing the envelope.  My friend and I ended up in conversation with the two very drunk guys at the next table.  That were drinking beers from wine-sized bottles.  They had gone through at least a ½ dozen bottles between them.  They were regulars and were leaving the next day for a hunting trip in Canada to hunt beer or moose or elk or something.  When they discovered they neither of us had ever tried Belgian beer, they bought us a bottle of Chimay Grande Reserve. 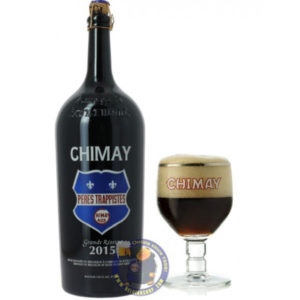 That night, my life changed.  I had never tasted anything like that beer before.  Learning more about beer, trying everything I could, homebrewing, starting a brewery, all these events could be traced back to that night.  Chimay Blue will always be one of my favorite beers.  If you want to tell me that St Bernardus ABT 12 is a better beer in that style, I won’t argue with you.  It might even be true.  I have never had Westy, but most who have say it is better.  But those beers don’t have the history.  There isn’t an emotional attachment.

I don’t know what happened to these guys.  B and I have joked over the years that they were eaten by bears.  I do know we never saw them at Rich O’s again, as often as we were there.  They may have gotten a DUI on their way home and never made it to Canada.  Lots of possibilities.  But whenever I drink a Chimay, as I did while celebrating my 5th wedding anniversary recently, I think back to over 20 years ago, and toast them with my Chalice.

Good morning my Glibs and Gliberinas!  And what a glorious morning it is for...everyone including those with TDS as Mueller…