Another last Friday of the month and another scramble to present ourselves as citizens of the world: growing intellectually and emotionally by exposing ourselves to the ideas and experiences of others to better understand that which exists outside of ourselves and empathize with those who think, feel and live differently than we do…and also a lot of genre fiction, mostly because of Brett.

So I picked up Dark Matter and the Dinosaurs: The Astounding Interconnectedness of the Universe by Lisa Randall. With a title and subtitle like that, one might think this is going to contain groundbreaking research. This is, after all, written by someone who, “studies theoretical particle physics and cosmology at Harvard University.”

Well, here is what the author says just two pages in: “This book explores a speculative scenario in which my collaborators and I suggest that dark matter might ultimately (and indirectly) have been responsible for the extinction of the dinosaur.”

You know WHO ELSE had collaborators!

Unpacking our books, I ran across one I hadn’t read in decades, Carl Sagan’s The Demon-Haunted World: Science As A Candle In The Dark. In theory, this is a book about critical thinking, examining people’s beliefs regarding alien abductions, faith healing, ESP, spirit mediums, “recovered memory” as part of the Satanic Panic of that time, and many more. Sagan’s continuing theme is that we do not educate our kids well enough for them to develop an effective bullshit filter, and that they don’t learn science properly, it being taught as a collection of facts rather than as a process of arriving at truth (or at least a better approximation of truth). There’s a lot of good stuff packed in there, but it’s difficult to resist yelling and throwing the book across the room since it assumes that teaching must be done by government schools staffed by highly paid government indoctrinators. If only he had examined THAT assumption critically… Lot of gratuitous swiping at religion, much of it deserved, much of it just for effect and moral preening. And somehow, he skims over the evil Janet Reno’s role in sending innocent parents and teachers to jail for secret child sex rituals. Bleh. Read James Randi’s Flim Flam instead.

Twenty years ago, when Food Network was actually about cooking and teaching, there was a wonderful show called Taste, hosted by David Rosengarten. Each week, Rosengarten would take a single ingredient, teach about it, and demonstrate several dishes to feature it. It was stark, simple, no bullshit, and a delight to watch if you were serious about upping your cooking game. I bought his Dean & Deluca Cookbook, and it rapidly became of one of my go-to books when tackling something new. Something bad must have happened because Taste vanished without a trace. Rosengarten hasn’t, though, and I have been reading It’s All American Food for pleasure and to get ideas on things to cook and how to cook them. Like me, it’s divided into two main sections, the first being American takes on ethnic cuisines (where we twist, bend, and blend dishes into something unrecognizable to its native land, but somehow even more delicious because of the mixing of influences- appropriation, if you will), and the second being regional American cuisines, a concept foreign to non-Americans, who generally don’t understand the rich variety of our geographically diverse foods and cooking methods. Well fuck those Euro-weenie snobs, America is a food paradise, and this book is a celebration of that.

Morieux and Tollman – Six Simple Rules: How to Manage Complexiy without Getting Complicated: Part of my friend’s “Ha, you’re in charge of people…well, let’s fix you” series. Six Simple Rules is short but dense and occasionally feels obtuse, but the ideas that landed have provided immediate paths forward for problems I’d thought were intractable. I see myself referencing the concluding chapter and the rule summaries repeatedly while I struggle through the implications of some of the denser sections.

Patterson, Grenny, McMillan, Switzler – Crucial Conversations I have mixed feelings about this one. It starts off overly self-helpy and frequently praises its own efficacy as part of the way it describes thinking about how you enter into necessarily intense conversations with others. I probably would not have read it if my friend (who has trained with this group professionally) had not pushed it as hard as she did (still trying to fix me), but I’m also glad that I did. It’s helped me avoid the Scylla and Charybdis of saying nothing to avoid conflict and being pushy when I think I’m right in both my personal and professional life and I’ve passed it on to a few friends and coworkers where appropriate. (I was almost done with this one last month but not quite there).

Recipes for the Cuisinart: Food Processor by James Beard: So I was trying to track down a brioche loaf recipe that I used to make when I first started baking. Everything goes in the food processor, rise, punch down, shape into a loaf and let it rise again. Apparently this recipe was ultimately James Beard’s fault from a midcentury cookbooks put out by Cuisinart. I had to have it. While I was messing around on this front I also picked up America’s Test Kitchen – Food Processor Perfection. I’d recommend the latter over the former although the recipes look solid in the Beard one, they’re also largely midcentury. The best bit was Beard takes a bunch of standard recipes and shows how the device can be more effectively used to speed it up rather than following the recipe as linearly. The ATK one seemed a bit obvious until I started hitting how to effectively slice and grind meat. The BF and I have done bulgogi from thinly shaved tritip, meatballs from short ribs and flap meat and a chuck roast lasagna that have each been spectacular. The food processor managed to steal precious counter space from the Kitchenaid this month.

Genji Monogatari by Murasaki Shikibu. Riven promised tentacles and busty women in school uniforms, but this is just an erudite exploration of the psychology of characters who are both alien in their setting, but contemporary and fresh in the way that the author addresses them as fully realized players in their world. While I’d conten-Oh! Beach volleyball. Later gators.

I read a lot of things here and there this month, but the highlight was definitely Charlotte Roche’s Wetlands, a novel that contains all the fluids a body can produce, and in excessive amounts. Either a brilliant dissection of the constraints patriarchy places of women’s bodies or a disgusto-porn novel put out by a respectable publisher, it is a pretty wild ride; Walt Whitman taken to the logical extreme:

Having pried through the strata, analyzed to a hair, counsel’d with
doctors and calculated close,
I find no sweeter fat than sticks to my own bones.

Well, I didn’t manage to get to the books I said I’d hoped to read this month in our last “What Are We Reading.” Wah wah. But it was tax season! And my birthday! And other excuses! Also, I had some personality conflicts at work, which I complained about at length to jesse.in.mb. He said he had been reading this one book, and it had been really helpful for him. So, I also have been reading Crucial Conversations. I have not yet finished it but I’ve tried to using some of the things I have read about at work, and it has been massively helpful. I agree with jesse.in.mb’s thinking above: pretty self-helpy and self-congratulatory so far. I am hoping to actually finish it in May, but even if I don’t, I’m pleased with what I have taken away from it up to this point.

Can you believe JW believed me? I’m always promising tentacles and busty women in school uniforms–you’d think he would have learned by now. 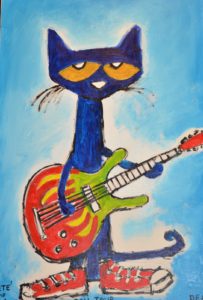 This month the best book I read was about a cat named Pete, or Pete the Cat if you will.  Today he made a big lunch.  Most people think Pete is a child–he’s not.  He’s a total stoner and if you need proof, here is a photo of the stoned kitty.

Now Pete was hungry for lunch, and he discovered the sandwich he made was far too large for even Pete with the munchies.  He just kept adding things between two slices of bread until he realized he just had a giant stack of food between two pieces of bread.

So he invited a couple buddies over, and they each got a piece of the sandwich.

Hey, you know what's lots of fun? Hanging out with a nauseous three-year old all night. He had it timed…

In our new reality, it's no longer Judge Wapner at 8, it's the elderly Jew at 7. But have no…