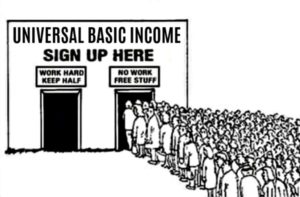 This is the first of what will hopefully be a multi-part series, written by a number of different writers, in which the author attempts to do the best job of writing a piece in favor of a policy he does not support.  Then everyone can tell him why it is a freaking bad idea in the comments.

With that said, lets get started by turning on our

I am going to start by describing what I think is the best possible Universal Basic Income (UBI) plan, how it would work, what it would cost, and what benefits it would provide.  This will be a pure plan.  Then, because of one part that I think is too far outside the Overton Window, I will discuss an alternative, more politically feasible plan, that is not as good but would converge with the pure plan with time.

The basic goal of the UBI is to eliminate poverty once and for all.  In order to do that, every American citizen [side note:  I am generally an open borders guy, but if you are just a resident let your home country send you a check] would receive a monthly check.  Each adult (18+) would receive $1040 per month.  Each child would receive $370.  This is based on the 2019 federal poverty guidelines with the adjustment that each adult gets the full amount for a single person household to avoid marriage penalties and the like.  The amount of the check would adjust with inflation each year.

Thus, we have eliminated poverty among US citizens.  Everyone gets a check that gets them above the poverty line.

The second part of the plan is to eliminate ALL transfer payments made by the federal government.  There would be no more welfare, no more agricultural subsidies, no more WIC, no more social security payments, no more aid to foreign governments, etc.  The government would still be spending a ton of money, but it would be on military and infrastructure and health care (Medicare, Medicaid and VA – I excluded them from transfer payments but an argument can be made for them being cut too) and other things that while maybe not entirely supported by Article I, Section 8, aren’t too far outside the realm of government services.

At this point, using a back of envelope calculation I did sometime in the recent past, you can pay for the UBI and balance the budget (well, maybe, I think to get it fully in balance requires some cutting of military spending, which would be a good thing) with a flat tax on all income at 35%.  That seems high, and is, but it works out that due to the check, a family of four isn’t a net taxpayer unless their income exceeds about $97,000 ($96,685.71 to be exact).  Also, the elimination of social security means that the FICA tax has been reduced from 15.3% to 2.9% (Medicare portion).

Benefits not yet mentioned:

That is the purest form.  However, that just reduced a lot of people living on a $3000 a month social security check to poverty level, now living on $1040.  This won’t fly.

It sucks, but we have to keep SS around for a while.  The alternate plan would end Social Security slowly.  All SS credits earned prior to the start of the UBI would be paid under the current schedule, but you could not earn any more.  For those retired, nothing would change.  Those retiring in the future would get a reduced SS payment depending on credits already earned, so those close to retirement might not notice a difference but those 10 to 20 years away would notice, and those 40 years away would basically not ever receive SS.  I would slowly over time reduce the 12.4% Social Security tax.  If it works out (I don’t know the math on this), maybe by .2% per year so that it is gone in 62 years.

A few generations down the road, SS would be gone and it would be the same as the original plan.

Destroy this idea in the comments.

Hey guys, what's up? I got to drive home yesterday from my Mother-in-Law's house. Towing a trailer of free stuff…

Good morning my Glibs and Gliberinas!  And what a glorious morning it is for everyone except for those living…