More than a few times  upon viewing a freshly harvested tract of timber I have heard people exclaim in horror, “Oh my God! They raped the land!”  Soon after they regret saying that because that really pushes my buttons. However, barely a quarter into my explanation they realize I am right. I don’t know why it has to be explained. It seems self-evident to me.

There are about seven and half billion people in the world and like you they all want toilet paper in their bathroom and a roof over their head. They all want goods packaged, stored and shipped in boxes. When you look at a tract of timber you aren’t looking at “the woods,” or “the forest,” or “the land.” You are looking at a field. Growing in that field is a crop just like corn, soybeans or cotton.  It is planted, tended and harvested like any other crop. Timber is one of the top ten crops in the world.

When Europeans began to migrate to the Americas they found a howling wilderness with boundless timber.  Because the European powers at the time used wooden sailing ships as weapons of war, that timber was seen as a valuable resource of national security importance so shipyards were built. Unfortunately for them, primitive transportation methods put much of that timber out of their reach. 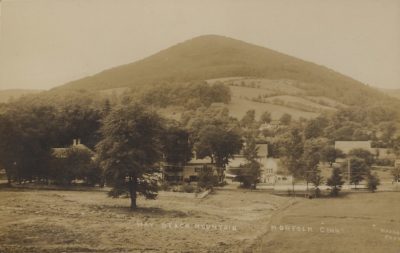 For settlers attempting to build farms, forest was seen as a hindrance so it was cut with impunity. They built houses, barns and fences. They kept their home fires burning twenty four hours per day year round. Everyone agreed that the forests had to be replaced with fields. The appearance of railroads allowed much more timber to be harvested and transported.  By the time of the Civil War, most of the eastern seaboard resembled a prairie.  The last virgin timber in Louisiana was cut near Woodworth in the early 1950s. My father as a young boy stood with his father and watched it being cut.

Realizing that much of a valuable resource had been squandered, The Civilian Conservation Corps was formed and tasked with restoring much of the forests. The family farm was a dying institution and most of the acreage from the farms that had checkered the land were replanted in timber. In just a few years the army of CCC workers had planted over three billion seedlings. The private timber operations, usually a division of railroads, began splitting off as separate companies and specializing in timber for uses other than rail ties. Today Louisiana produces between one and a quarter and one and a half billion board feet of lumber annually. It accounts for nearly half of the agricultural output of our state measured in dollars.

Every square inch of that harvested is replanted.

Timber planters are contractors for timber companies and for private owners. It is highly specialized work. Finding them is not easy as there aren’t very many of them. Finding a good one is even more difficult. The one we have used for decades is top notch. He has assembled a crew of 18 young men, mostly from Guatemala. To get them in on a work visa he has to screen them strenuously. No criminal record. No family here in the states. They must go back home after planting season. References to vouch for them. On top of that he personally screens them, trains them and watches their work. Those that can’t cut it are sent packing. He claims it took him years to assemble the crew he wanted. He is kinda pricey, but worth every penny. I also slip each of the crew an extra envelope at the end of the job. They can cover forty acres in four hours. The trees are spaced properly and every one of them lives. No bent roots and no tipped over seedlings.

Because we are planting a cultivar known as the super pine they grow incredibly fast. Hell, if you don’t get out of the way it grows so fast it will knock you down. After planting one patch it was five years before I returned. I didn’t recognize the place because it had grown so much. After only five years the road was barely passable and you couldn’t see the sky for the canopies. 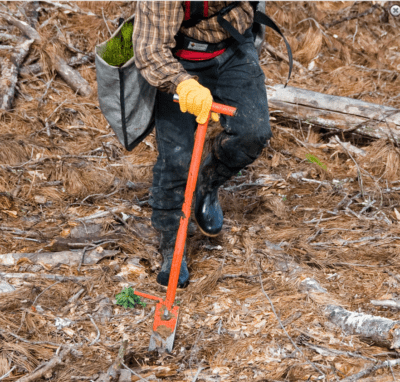 The trees are acquired from commercial nurseries in bundles of 1000, a bundle being about the size of a square hay bale and weighing around 100 lbs. They are  between one and two feet tall and their roots are dipped in gelatin to keep them from drying. The crew lines up with each man about eight to ten feet apart. Each man has a dibble and about half of a bundle of seedlings on his back. They begin marching in time shoulder to shoulder they take three steps, stop, put the dibble in the ground with their foot, wiggle it, place a tree in carefully so as not to bend the root tips up, then stomp their foot next to the hole to close it up. Then they take three steps making sure everyone keeps up with the line and then repeat. It is very physically demanding and tedious work. I stand by a fire and watch. Four hours and they are finished. I am tellin’ ya, those guys are machines, but I have never seen one of the crew over 30 years old.

I tried it once myself alone. I got approximately 100 yards by 100 yards planted…in two weeks. I was nearly crippled from it. I will gladly pay the 15K to have ol’ Joe and his crew do it.

Planting approximately 8×8 feet apart it works out to about one bundle per acre. That may seem too close but over time the trees will thin themselves out.  Planting close causes them to grow tall and straight. If they are too far apart they will branch out and have too many knots making poor saw logs.

I have had success by casting seed. A forestry company here locally sells super pine seed which you buy by the pound. Each seed is coated with fertilizer and bug killer. It’s not cheap but I can do that myself. I found that the mechanical caster they sold me would put the seed out too thick no matter how I adjusted it so I cast the caster in the creek and started spreading/throwing by hand. I successfully planted 5 forty-acre plots that way over the years, each one taking me about two days to finish.  On one hilly plot the day after I finished casting out the seed, a huge rainstorm came up. “Oh, hellfire,” I thought. “All of my seed washed away.” So I bought more and replanted it. Apparently, I was mistaken and double planted. Today the trees are so close together you have to turn sideways to walk through there.

I estimate we have planted around one million trees over the decades. Some of the first timber I planted is now ready to harvest. I don’t know if I can cut it. If hunting leases will pay the property taxes I may just leave it for my grandchildren. 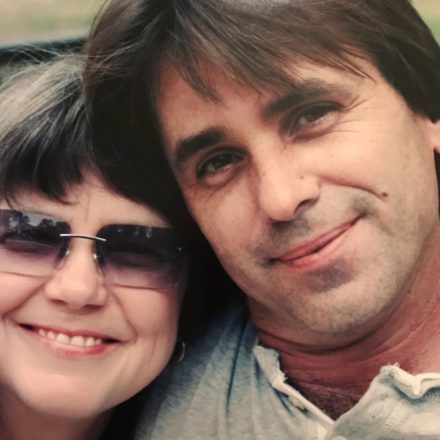 Hey guys, sorry I missed you yesterday. I'm too old to go to a music festival, drive home hungover and…

Good morning my Glibs and Gliberinas!  And what a glorious morning it is as Mnuchin refuses to hand over Trump's…