The Glibening, Part One Million Seven: That’s How You Troll 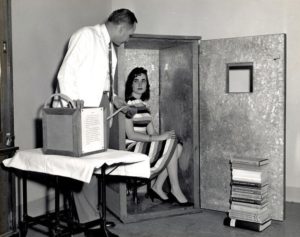 “Sergeant Brown, since it’s going to be a while may I go inside and use the bathroom,” asked Ramesh.

“Sure,” said Brown. “Just stay on the First Floor.”

They walked through the glass doors and into the building lobby. Behind the empty security desk a grimy Panasonic CRT monitor slowly cycled through different security camera feeds. They reached the elevators and Murphy paused.

“You going to be long,” asked Murphy.

“No,” said Ramesh feeling as if he was eight years old on a roadtrip with his parents.

Ramesh returned to the lobby with his badge better mounted so as to flash out from behind his jacket as he walked. He found Murphy smoking a cigarette in defiance of the “No Smoking” sign posted in the lobby just above a well-used ashtray.

“Damn, this place has gone downhill. Cryptid Quarterly, Tinfoil Times, ReptilianWatch, Orgone Research Foundation – whatever the fuck that is. I remember when Thought! was the most crackpot thing here. Back when your fashion and lifestyle magazines were still here, before the wacko crowd started moving in.” 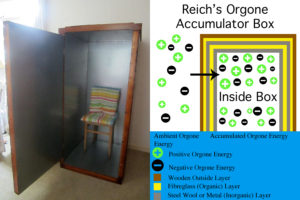 Ramesh’s curiosity was piqued. What the fuck was an Orgone? He pulled out his phone to look it up on the internet.

“Hey kid, I’m gonna go drop a deuce. You going to stay here or go back outside?”

“I’ll go back outside,” mumbled Ramesh without looking up from his phone.

While Ramesh was lost in his research he became vaguely aware of someone else in the lobby. His eyes flicked up and he saw a man pushing a housekeeping cart towards the back of the lobby. Ramesh returned to his phone. Reich was a badass. Kicked out of the Communist party, books banned and burned by the Nazis, kicked out of the psychiatric association, then the whole Orgone thing. The FDA enforcement action against Reich sounded like the type of crusading work his boss did, but they’d never get a ruling that sweeping today.

“Yep, they sure put him through the spice grinder,” said a voice in Gujarati. 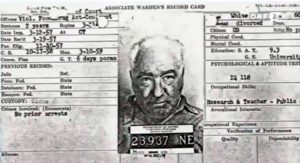 Ramesh started then looked around. The man pushing the maintenance cart was now facing him as he towed the cart through a door at the rear of the lobby; it was the shaman from the bad production number which had started this whole thing, now dressed in khaki slacks and mustard uniform polo embroidered with a sun logo. The shaman disappeared through the doorway, followed by the cart, and the door swung quickly shut and clanked.

Ramesh sprinted to the door. He worked the bar and charged the door only to have it open a few inches then stop, jammed by something. Ramesh looked through the opening and saw the landing of a stairway. The cleaning cart had been placed so as to impede his progress. He stuck his hand through the door and rotated the cart so it would allow the door open wider. He pushed the door open as far as it would go and slid sideways through the doorway to find himself at the top of a stairwell with cinderblock walls, concrete floors and stairs, and metal railings and trim. The stairwell was lit with dim yellow lights in metal cages. Ramesh headed down.

He reached a landing where the walls changed from cinderblock to dark gray stone blocks, black stone stair treads with noticeable wear at the centers replaced steel-edged concrete, and the railings became more ornamental and antique looking. On the landing floor was a camel scrotum leather pouch with a flap closure – a purse. His instincts, honed by countless hours of dungeon crawling games, kicked in and he scooped up the purse. 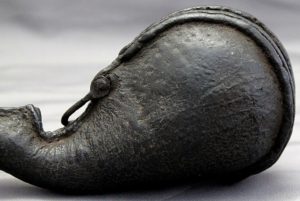 A powder flask made from a camel scrotum.

He trotted down the next flight of steps to a landing with a door. Ramesh grabbed the handle and gave it a turn – it was locked. Maybe the key was in the purse. He opened the flap and looked inside, he didn’t see anything. He shook, then palpated the scrotum but felt nothing inside. Finally he turned the purse upside down and tapped it out. A small cascade of sand, dust and fluff tumbled to the floor, but no key.

The only thing he could do was continue downwards. He descended to the next landing and turned the corner to see a tall, thin table made of carved rosewood atop which lay a silvery plastic tray containing a small lavender colored packet – a Twinings Darjeeling teabag. He opened the purse and dropped the packet inside.

After the next flight down he reached a large metal door without a handle or keyhole. The center of the door was dimpled outward. The area where one would expect the handle to be had been reinforced with plates to deny access to the slit between the door and its frame and to cover the area where the lock mechanism presumably was. There was a yellowed sign on the door – “Absolutely NO Thought! Magazine Interns Past This Point. -R Kestrel, ed.” The sign had been adorned with a penis graffito.

The purse and the teabag had obviously been left for him to find, and were somehow related to his getting through the door. The logical thing was to put the packet inside the purse, which he had already done. He opened the flap and peered inside. Nothing discernible had happened. He had no water and no heat source, hence no means of making tea. He removed the packet and tore it open and found that it contained the expected teabag. He dropped the teabag back into the purse and closed it and squeezed it. Again, nothing.

And then it dawned on him that he was being trolled to no lesser a degree than his boss had been. The teabag was a clue, not an artifact. He rubbed the purse on his forehead, first shyly, then more enthusiastically. He had, after all, gone to Woodberry Forest, and wasn’t one of the athletic or popular boys; he was no stranger to the feel of a scrotum on his forehead. 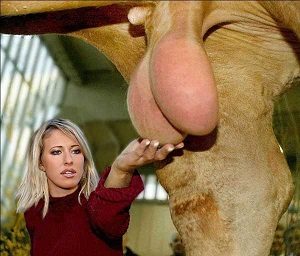 Suddenly he heard the vocalizations of a langur monkey and felt something stiff and bony moving around inside the purse. Ramesh shrieked and reflexively dropped the purse and stepped back. The purse hit the floor, lay still for a moment and began pulsating. The flap opened slowly, and a small furry hand emerged crawling on its fingers and pulling the stump of its lower arm behind. The monkey paw was mostly mummified, yet some fleshy parts remained and those were in a liminal state between putridity and mummification; two small jagged bones poked out of the stump. The paw picked up steam and swarmed up Ramesh’s leg and onto his shoulder finally hopping up onto his head where it started grooming his scalp with its nails.

Unbidden, a childhood memory rose up from the depths of his mind, and he blurted out a nursery rhyme he had been taught by Bhagavaandaas, the old man who lived in a lean-to built against the outside wall of his family’s compound in Gujarat. The old man had no discernable job, yet was respected by all. He sat outside his house all day and received visitors with whom he had long, quiet conversations and served tea. Once young Ramesh had learned that it was only okay to approach the old man between visitors he found that Bhagavaandaas was an endless source of tales.

Be now my servant.

At that, the Paw did a little dance across Ramesh’s shoulder, then ran down his leg and over to the door. The Paw then turned around and ran back to lie down beside Ramesh’s foot. Its small hand formed into a fist and the Paw twitched then went limp.

The Paw was telling him he needed to knock on the door. Kind of obvious, but whatever. He picked up the Paw and the purse from the floor and dropped the Paw into into the purse. He heard the sound of a monkey shriek and the teabag and its wrapping came flying out of the purse and fluttered down to the floor. Apparently the Paw was particular about its lodgings. He looked down at the teabag and wrapper and tried to decide what, if anything, to do with them. The decision was made for him as they became first translucent, then transparent, then disappeared altogether. He approached the door and heard muffled voices coming from inside. Ramesh raised his hand and rapped twice with his knuckles. He waited, but nothing happened. He balled his hand into a fist and beat on the door four times, producing a loud booming which echoed through the stairwell. Still nothing.

The Paw was totally being a bitch, but that was the nature of tulpas; they were not mere automatons like golems, but had agency. Ramesh had first heard the word “tulpa” during a Cultural Anthropology course at William and Mary, long after Bhagavaandaas was dead. The old man had given him a thorough education about tulpas and Ramesh had thought it was merely a bunch of rhymes and stories. He decided to wheedle the Paw.

Give me good luck.

The Paw formed into a fist and thrashed five times, miming a fist knocking on a door, then paused, then thrashed twice more. Each thrash of the wee fist was followed by the sound of a hearty rap on the door. “Tap, tappa, tap-tap… tap-tap.”

The door opened and Ramesh found himself face to face with a Troll, a Troll like in The Hobbit. The Troll was doing a dope deal with a chunky young Korean dude.

And at that moment Ramesh remembered that he was wearing a badge.

Tonio hates WordPress with the heat of a thousand blue dwarf stars. He only publishes here because his love for You People(tm) overcomes his visceral loathing for the Malbolge of word processing, web publishing thingies. Now get off my lawn.