A Chronicle of the Insurgency, Part Five: At Home with the Hasturs 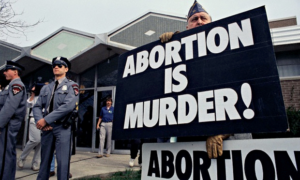 Junior stood on the sidewalk back against the building wall with his “Abortion is Murder” sign. Most of the passing college students looked at him with disgust. A few were visibly angered and mouthed or muttered insults or flipped him off. He ignored them and kept scanning the crowd for possible threats. A fat dyke waddled by, the saggy jowls of her thighs flapping against her knees. She fixed him with a porcine look of hatred.

“Phylactery? She’s one of them?”

“No, monitoring bracelet; she’s Operation: Rescue This! She’s not going to risk a probation violation.”

The dyke flipped them the bird with both hands, and stomped angrily down the sidewalk to the applause and cheers of a few onlookers.

“There. The tall girl with the stringy hair. Wave your sign, Dad.”

“Ohhhh…” Hastur pumped his “Satan Loves Abortions” sign up and down eagerly. Nothing.

Junior expertly rotated and tilted his sign to flash the sunlight off it so as to attract the girl’s attention. Suddenly she noticed the protesters and began to run towards them, screeching. Junior planted his feet apart and crouched down, tightening his grip on the thick cardboard tubing supporting the sign.

“Remember, you can only block them if they attack you or your sign. We can’t defend each other.”

When the girl was three feet from them she reached up to grab at Junior’s sign. He quickly tilted the top of the tube backward. She sensed the trap that had been set for her, and turned to Hastur.

Hastur waved his sign back and forth. “Jesus hates abortions, but Jesus loves you,” he called. That did the trick. 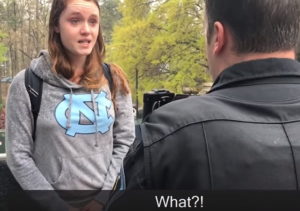 Becky can’t believe that she’s under arrest for stealing something that made her angry.

The girl crouched and jumped at Hastur’s sign, timing her jump so that she reached apogee when the sign waved closest to her. She grabbed the poster board and held on as she fell. Hastur wasn’t anticipating an attack that violent and precise from a Human female. The tubing slipped through his hands until the bottom hit the ground. He regained his grip, but that only caused the sign to tear in half as the girl fell. She stuck her landing and scarpered off with the posterboard, screaming “this is why Womyn can’t get abortions in this state.”

Sad, eight-bit synthesized music played and the message “Player 2 replay level?” appeared in the air ahead of them. Everything else dimmed and stopped.

“Volleyball lesbian, Dad. She’s the toughest one on this level. You want to try again?”

“Let’s move on to the next level before your mother gets here.”

“So what’s the next level,” asked Hastur quickly. Junior was growing up too damned fast, and his first meal hadn’t helped things. 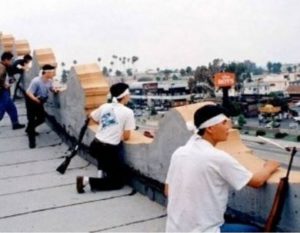 “Rooftop Koreans. We’re on top of a dry cleaning business, but we’re controlling the looters at the electronics store across the street. The electronics guys are protecting our building. Don’t shoot anyone unless they are actively breaking in, or carrying loot out.”

An array of weapons appeared in the space in front of them.

“Shotgun. Go easy on the ammo. It takes them a while to bleed out.”

Hastur picked the pump action twelve gauge with buckshot, and Junior chose the Mini-14 Ranch Rifle, with the Super Deluxe Tacticool upgrade which he had unlocked through numerous in-game rewards.

Suddenly the boom boxes on the street below shut off. There was a moment of eerie silence, and then a low roar punctuated by shouting, and the sounds of glass breaking and of solid things beating on clangy things. A police cruiser sped by the intersection with lights and a brief siren whoop – getting the hell out of Dodge.

“Dad! There. Crowbar guy. Wait until I tell you.”

“Stop or we’ll shoot,” yelled Junior. The skinny Korean in the blue polo repeated his words in slightly accented English.

The fat Korean in the yellow polo fired his shotgun.

“Great nuclear Azathoth,” swore Hastur, his words immediately repeated by his avatar to the puzzlement of the blue-shirted Korean. “That thing kicks like a Shoggoth.”

A crowd of people swarmed the entrance to Park Electronics and sheltered in the terrazzo entranceway underneath the marquee. A few faces turned and pointed at the rooftop. Junior squatted down and motioned for Hastur to do the same.

“Can I shoot again?”

“We’d lose the level. There isn’t a clear shot at the door with all those bystanders, which is why they started up the crowbar again.” 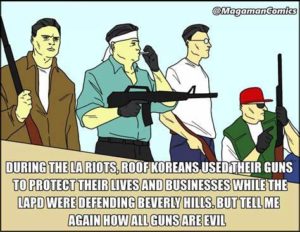 Junior twitched his tentacles and the word “pause” appeared; the scene darkened and the action stopped. The rooftop scene cut to a white background with a blue logo consisting of a “W” inside a circle.

“That’s how the WartCo AI pronounces it. I haven’t figured out how to fix it.”

“Dad…” Junior rolled his multiple eyes. Definitely his mother’s son in that regard.

The WartCo logo contracted until it was a small blue dot in the center of the screen. The dot was replaced with a circular moving image which grew until it filled the screen. The image showed a buxom young woman tugging a rolling suitcase down an urban cobblestone alleyway. The woman walked out of the street scene and into Hastur’s rec room. The street scene cut to the WartCo logo on a white background.

“Hi, boys. Who wants pizza? Fresh from the oven at Armand’s?”

“And how,” replied Junior.

“Junior, take the stasis box from your mother and go set the table.”

Junior tentacle-hugged his mother and took the suitcase from her before exiting.

Hastur also tentacle-hugged Moira, but in a distinctly different fashion than his son had done.

Hastur made a surprisingly small and needy noise.

“Me, too,” she whispered. “Just wait until Junior goes to bed.”

“So how was your day,” boomed Hastur.

“Good. You should have seen the face on the Armand’s guy when I put the pizza in the ‘suitcase’ and started rolling it. ‘Hey Lady, you wrecked your pizza.’ It’s Capitol Hill, they’ve seen weirder.”