On a small wooden stand in my office, there is an old watch.  It’s nothing special and has no value to anyone but me.  It’s an old Westclox Pocket Ben, which probably cost a couple of bucks back in the 1930s; an old windup tin case watch with a little second hand and a fob hand-braided out of nylon string.  The crystal is cracked, and the watch will run when wound but only for an hour or so.

It’s an old, cheap, busted watch, with a market value of zero.  But Bill Gates couldn’t buy that watch from me.  It was my grandfather’s watch, and aside from a few old letters and postcards my mother saved, it’s the only tangible thing I have from him.

Back in The Day…

When I was a little tad, there were several figures that loomed large in my young life.  My Dad, of course, and his father, my Grandpa Clark; our neighbor, who had the farmstead down the road, Brownie, a WW1 veteran who was a great surrogate grandfather.  But my Grandpa Baty figured very high among that lot. 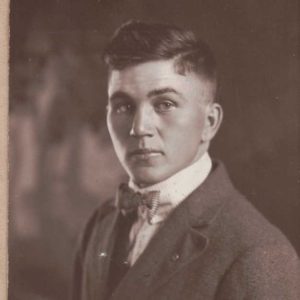 It is no understatement to say that Grandpa was, as they put it in those days, “a bit of a character.”  Born in 1896, he had attended college and obtained a degree (exactly at what level, I never have known) in business, and worked in a bank in Waterloo for a few months around the time of the Great War.  But he found he hated being indoors all day, and so went back to the family farm and ended up taking it over from his father; he was a farmer and carpenter for the rest of his life.  He was widely known around northern Lynn County for his dry wit, his skill at shoring up old barns, and his uncanny ability to pull harvests of corn and soybeans out of the dry, sandy soil of the old farm.

The Baty family farm was a century farm, having been homesteaded by my great-great-great-grandfather, one William Baty, in the 1830s.  It was passed on in turn to his son Thomas Jefferson Baty, who served in the Civil War; then to my great-grandfather, Andrew Jackson Baty, and thence to Grandpa.  My mother was fond of pointing out that when she was growing up during the Depression, that farm families may not have had much money but they always had enough to eat; she was also fond of paraphrasing a Patrick McManus quote, pointing out that her family was among “…the landed gentry of eastern Iowa during the Depression; we owned the wall we had our backs to.”  During those hard years Grandpa kept a bunch of laying hens, a milk cow and a few pigs, and they got along just fine.

The farm was fifty acres of sandy bottomland along the Wapsipinicon River in northern Lynn County, Iowa.  I spent a good part of my youth wandering around that old farmstead.

When I was a little kid, I remember watching Grandpa shave, which he did every day, even if he was just choring around the farm.  I’d watched my Dad shave with a safety razor, but Grandpa used shaving soap with a badger-hair brush and a straight razor, which he touched up on a leather strop before each use.  I thought that was pretty cool.  Grandpa always wore his old hickory Key bib overalls, and he always had his old pocket watch stuck in the bib pocket, secured with a fob he had tied up out of coarse nylon string.  Whenever I remember my Grandpa, I remember the smell of his shaving soap and the sound of that watch ticking. 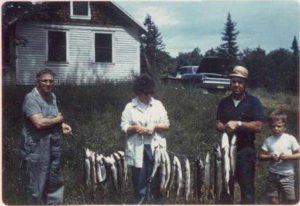 Like most of my family, Grandpa didn’t care much for hanging around the house.  With a good fishing river only a ten-minute walk from the house, there just wasn’t any reason not to go try to catch a mess of smallmouths for supper.

Not content with his friendly little stretch of the Wapsi, Grandpa accompanied my Mom, Dad and I on adventures fishing in Minnesota and Wisconsin.  A family friend had a cabin on the edge of the Red Lake Indian reservation, and it was a favorite destination.  While he was a better-than-average angler, Grandpa always opined that the best part of fishing was just being outdoors, along the river, on a nice day, with his family.

Spinning a Yarn or Two

Ever heard of flying snakes?  Grandpa had them on his farm, or so he told me when I was seven or eight years old.  One summer day we spent the better part of the afternoon tramping around the place looking for flying snakes, which he had convinced me really existed.  We didn’t find any.  When we returned to the house, my Mom called me away for a moment, explaining, “Grandma wants to talk to Grandpa for a minute.”  I remember not being quite able to make out words, but I had the distinct impression that Grandma, a tough old farm wife, was giving Grandpa a damn good piece of her mind.

But his wife’s disapproval would never stand in the way of a good yarn.

On one visit Grandpa handed me a badly worn chunk of what appeared to be hard black rubber.  “I was out working on the tractor,” he explained, “and this fell out of the sky and hit me on the head.  I saw on the news last night that one of the Apollo spaceships flew over yesterday.  I think this fell off its steering wheel when they went by.”  This was a stretch too far for me to quite believe, even coming from my Grandpa to the eight-year-old me, especially when I noticed later that Grandpa’s ancient John Deere was missing a chunk of the hard rubber coating for its steering wheel that was suspiciously the same size as the chunk off “the Apollo spaceship.”

Endless were the tales of Grandpa’s adventures.  Fish would poke their heads out of the river and talk to him.  Once a raccoon woke him up and warned him that the neighbor’s cows were in his cornfield.  He was on a first-name basis with every squirrel on the farm and conversed with them all regularly.  In that case I suspect he may have been telling some sort of truth, as after I started hunting in earnest, he reminded me of the rule that all my cousins and I had to follow, namely that no squirrels were to be harmed on his place.

But most of all, Grandpa was a man who couldn’t abide other people butting into his business, whether those people carried a government-issued title or not.  He was an old-fashioned sort of man who minded his yard, his farm and his family, and didn’t bother anyone if they just left him alone. 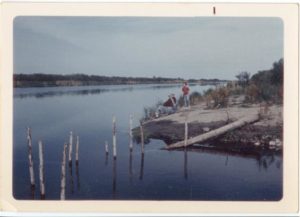 My first paying job came along when I was about ten years old.  I had a brand-new pellet gun and took it along when we were down at the farm visiting the grandparents for the weekend.  Grandpa eyed the pellet gun and asked me if I was a good shot.

We walked across the barnyard to where Grandpa’s corncrib sat, full of the recent harvest.  “I’ve got some problems with rats,” he told me.  “Sit quiet here on this old tractor tire and watch for a while, and you’ll see them.  I’ll give you, oh, a dime for every dead rat you can pile up.”

I made five dollars that weekend, my first foray into the gig economy.  This would have been around 1971, when five dollars would keep a kid in pop and candy bars for quite a spell.  I was happy to have the cash, Grandpa was pleased with the pile of dead rats (although not so pleased that he didn’t leave it to me to bury them out in the cornfield) and my folks were pleased that I had learned a lesson in exchange of value.

A few years later, I was about thirteen, and Grandpa offered to buy me a bottle of pop in town if I’d help him rig up the galvanized metal chutes in that same corncrib; the corncrib had two sides, and Grandpa’s little PTO-driven elevator would dump the corn in through a hatch in the roof, through the chutes to one side or the other for storage.  We spent about an hour rigging the Rube Goldberg contraption up; when we finished, Grandpa flashed his characteristic grin at me and said, “those cobs will go through that like shit through a tin horn.”

I realized then and there that I must be growing up, as Grandpa would never swear in front of a woman or a child.

Grandpa put in his last corn crop the year before he died at 78.  He worked, always, well past the age that people nowadays think of retirement; but I honestly don’t think the idea ever occurred to him.  He gave up carpentry for hire about the time he turned 70, but he honestly loved farming and saw no reason to quit; he loved muddling around the place, plotting next year’s allocation of land to field corn and popcorn for the popcorn works at Vinton.  He enjoyed fiddling with his ancient John Deere Model A, patching up the fences and occasionally sneaking down to the Wapsi for a spot of fishing.  He had a simple life but a great life.  He taught me more than I have time to tell you here, but all of that is paying off now that I’m the Grandpa. 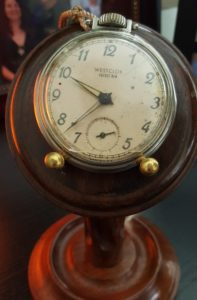 The summer I was fourteen, in 1975, Grandpa died, of complications of diabetes.  It’s useless to think about how these days, improvements in treatment may have resulted in a longer life for this man I loved and admired; that was then, he died, and that was that.

A few months after the funeral, Dad and I were out fishing.  We walked down a favorite northeast Iowa trout stream, fishing as we went, until we came across a spot Grandpa had called a favorite.  It made me feel bad, and I said so.  But Dad, with wisdom typical of him, said I shouldn’t feel bad.  He had, after all, loved and admired his father-in-law, as so many people did, but he also knew the way to see things.  “We should feel glad,” he said, “that your Grandpa was here to enjoy these days with us.  He’d want us to keep doing that.”

That’s how Grandpa left us.  Last year, after my Dad passed, Mom dug out Grandpa’s old pocket watch, which she had put away all those years for this moment.  “I want you to have Daddy’s watch,” she told me.  “Take care of it.”  I promised her I would; now Mom is gone too, but my promise to her holds.

Now, once in a while, I take the old Pocket Ben off the stand, wind it up, put it to my ear and listen to it ticking for a few minutes…  And suddenly, I’m a little kid again, sitting on my Grandpa’s lap at the kitchen table, hearing his watch, smelling his shaving soap, and listening to one of his tall tales.

Well, after three consecutive summers of throwing money at the problem, my kids decided they would learn to swim this…

Looks like another day of living off coffee and grimly holding on to my temper, from lack of sleep.…