As you probably know by now, CPRM has a The Hat and The Hair merch store on CafePress, and, after heeding my advice, has opened one on Redbubble, too.  I’ve been buying crap stuff from Redbubble over the last several months, and really like the scope/variety and quality of what they offer.  It also helps that Redbubble is always having some kind of sale/online coupon (hint, hint).  So, when his store went up, of course I was gonna buy something.  And, that something was t-shirts.

I decided on the classic H&H design, as well as a Gropin’ Joe 2020 shirt.  Redbubble has a lot of different styles of shirts for men/unisex, women, and kids.  I always go with their ‘classic’ t-shirt, which is made using Gildan tees—medium weight with easy-to-remove tags.  I can’t speak as to what the other styles use.  Maybe you should go check them out and see what they offer.

The shirt color selection was the most difficult part of this process.  I usually eschew lighter colors in t-shirts. However, the designs require a lighter background in order to see everything clearly—to really make ‘em pop!  On top of this, I try to have some variety in my t-shirt collection, which I usually accomplish with t-shirts of various (dark) colors.  Purple seemed to preview the H&H design well on the site, so, purple it was.  I broke with my usual habit, and chose light blue for the Gropin’ Joe shirt.  It just seemed so…correct.  After a few button pushes, they were paid for, and all I had to do was wait for them to arrive.

In a mere eight days, it was mail call.  Here’s the star of our show: 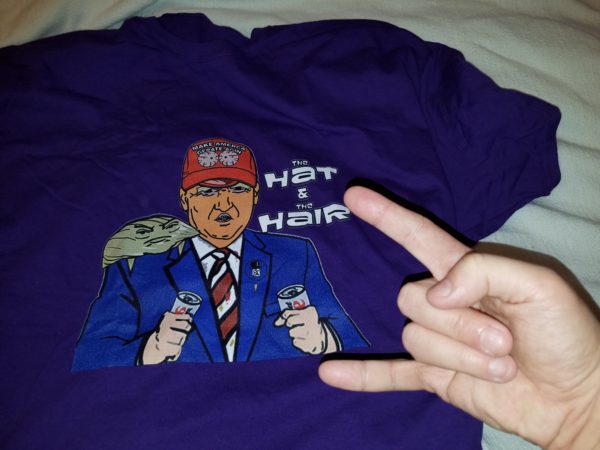 Here’s Joe—with a smile that just takes hold of you: 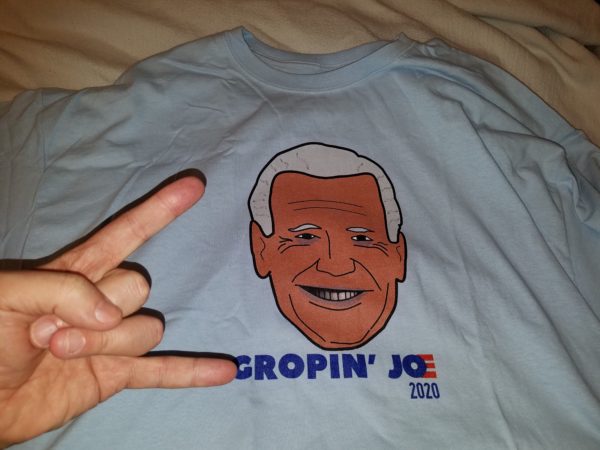 An interesting fact about Redbubble’s shirts:  They stink.  I mean, the chemical smell is pretty strong.  It’s a glue-like smell that’s from the manufacturing process.  They even come with these little notes, attached by miniature clothes pins, that I could have sworn talked about the smell.  I must be remembering something from an earlier order.  Anyway, here are a couple of pics of those tags: 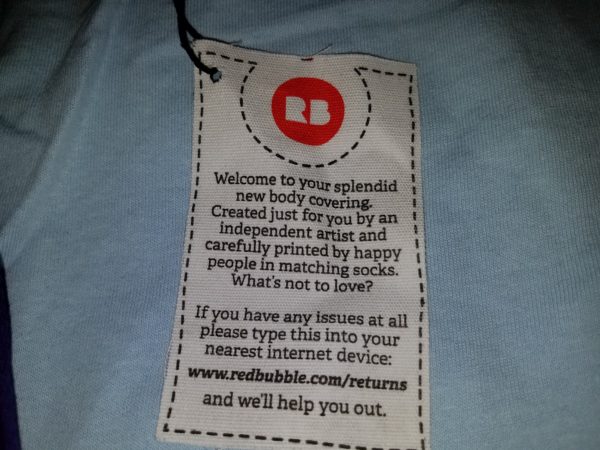 I thought it told you the shirts stink. Guess I was wrong. 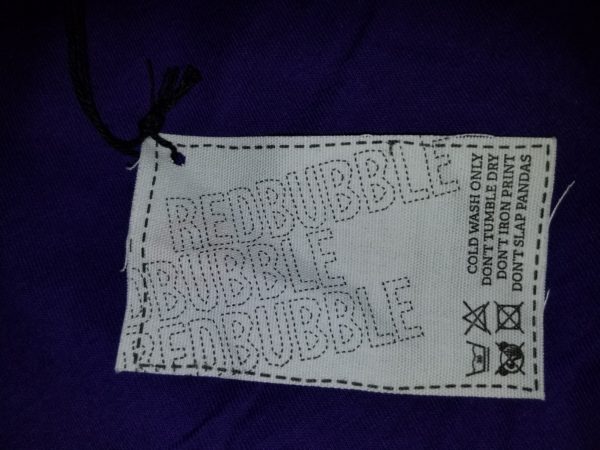 They sure know how to promote themselves.

They put these on each and every t-shirt in an order.  Why?  Make-ready work, I guess.  In any event, it doesn’t seem very eco-friendly to me.  I note this because Redbubble is an Aussie company, whose State-side presence is an office in San Francisco.  They also include at least one company sticker in each order, although they sometimes put in several. 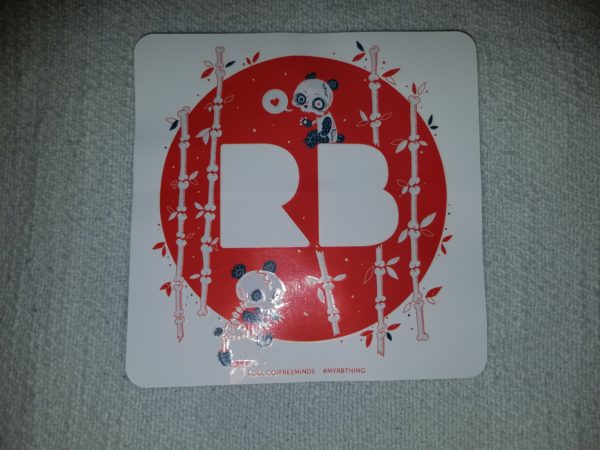 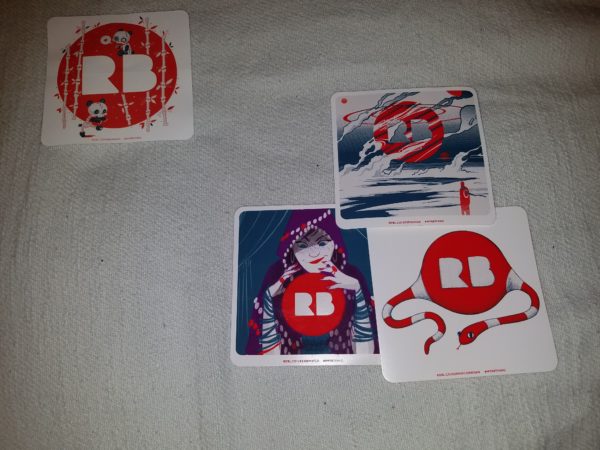 A smattering of stickers

They are a quasi-nice little ‘extra’, and, I admit I look forward to seeing which ones I get.  They seem to have a rather limited pool of designs from which they pick, so, the experience can be kind of ‘meh’.  I have to admit that I’m not keen on “zombie pandas”; cute, or, gruesome, but not both. If I had my druthers, I would go with the quasi-The Quiet Earth design. They probably know this, and are just screwing with me.  Now that the shirts have arrived, though, they need to be washed, air-dried, then put through a few “fluff” cycles (I am not a Philistine!), which will take the better part of a day.

Though all of this, CPRM’s words kept sounding in my brain:  “It’s time you Contributed, boy!”   Do a write-up of buying and wearing t-shirts.  Not exactly Hunter S. Thompson territory, but I’d give it a shot.  That led me to the question:  Just where would I carry out this task?   CPRM suggested that I go to a Starbucks –he’s such a kidder!  If I did that, I probably wouldn’t stick around after getting my order, considering I even managed to find something worth giving them money.  No, this was going to have to be somewhere where I would conceivably spend time productively, while surrounded by other humans, which also ruled out the DMV. 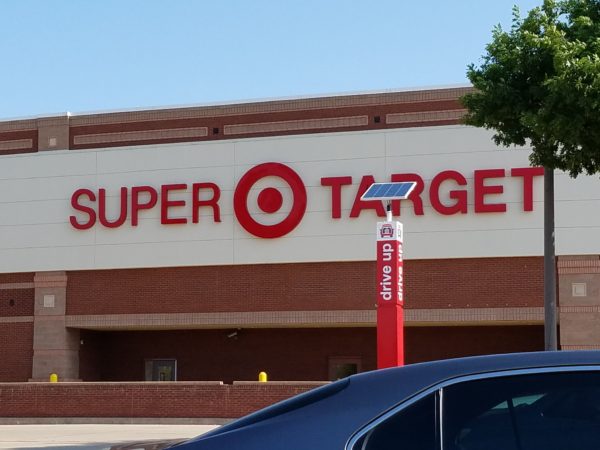 I figured that I might as well get some regular retail shopping done, and, this just happened to be the location of previous unexpected interactions with strangers (no changing rooms were involved, dammit).  I considered the fact that it has a Starbuck’s inside only slightly ironic.  “Slightly”, because it is a Target in Plano, Texas:  an area where people seem to crave burnt, over-priced coffee.  I’d have to swing a really big “dead cat” to find suitable alternatives, and, yes-I’m excluding McCafé.

The first associate that said “Hi” to me did seem to take a quick scan of my shirt, but nothing came of it.  That would describe just about every interaction I had that day.  Moms with their kids; busy clerks merchandising whatever section they happened to be in; wanderers like me.  Some eye contact, and, maybe a quick scan of the shirt, but, no reactions.  I shopped for about an hour and a half.  Actually, it was mostly just wandering around and seeing if I could find anything worthwhile.  I actually had a mission of sorts, that I will get to in the next section.  While I probably missed out on a greater opportunity for chat by going to a self-checkout line, I did end up getting assistance from the poor guy who has to fix screw-ups (I scanned the wrong barcode on a sale item).  Nada from him, too.  Paid, and out the door, it was time for a quick stop at the booze shop.

Just use your imagination, people!

I didn’t even think of taking a picture of the store.  Mostly because, I was on a mission to get the FIL a belated Father’s Day gift.  It seems Amazon just up and lost track of it sometime over the holiday weekend, and, we didn’t find out until this particular day.  As it was, we were headed up to see my In-laws the day after all of this, so, we would just take him some hooch.  He is fond of a certain blackberry Merlot that I had introduced him to some years back, and I needed to stop at the only store I could find that carried it.  It was a last-minute addition to my excursion, and it only barely registered with me that I might have an opportunity for explaining this cartoon president on my shirt.  I needed help finding this back-water gem, and the clerk that drew the short straw with me was very helpful.  I didn’t sense much interest in him, until just as we were parting company.  I saw that he gave the shirt a scan (Hey!  My eyes are up here!), when I thought I caught just the barest hint of a question forming about it.  I guess he thought better about getting wrapped up in a conversation about a funny YouTube animated series.  Your loss, Mr. alcohol-finder-helper-guy.  A quick monetary exchange at the register—I couldn’t sense any curiosity in the cashier—and I was off to… 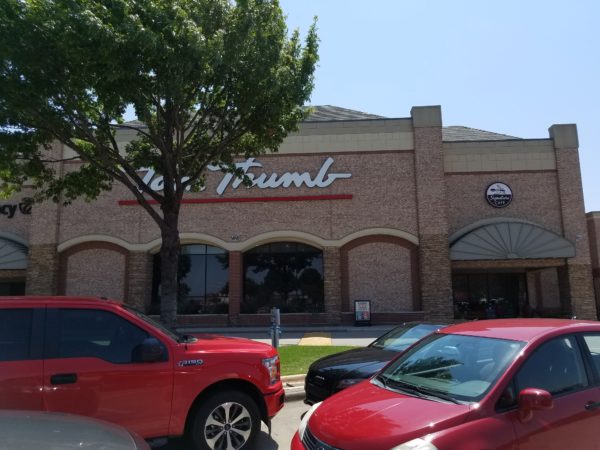 It’s some kind of thumb, I think.

I had to buy rice.  It was as thrilling and lively as that sounds.  Most of the shoppers were older folk.  A couple of moms with kids.  It was a big goose egg.  Even the checkout clerk managed to avoid eye contact.  So much for customer service, I guess.  I went with Success Boil-in-bag rice, and, some Tony Chachere’s Chicken flavored rice, if you’re curious.  Of course, I remembered to take a picture here, where there was no place that allowed for an unobstructed shot.  After almost burning out my retinas in the noon sun, I was ready for my last stop. 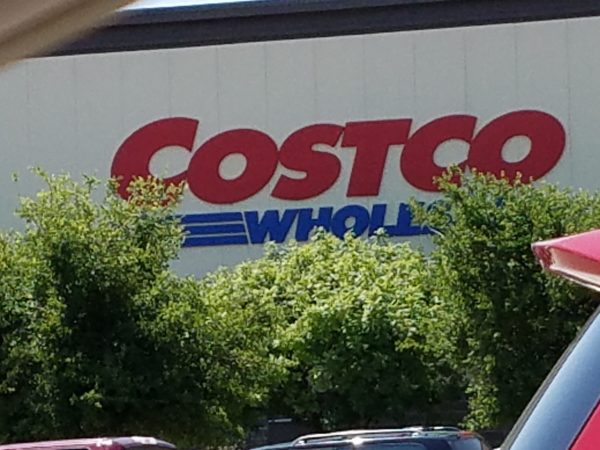 Not just a partial Costco, you see.

While I had hoped that the Mecca of warehouse-club consumerism would be more fertile ground, I had become sort of pessimistic.  The greeter/card-checker was pleasant enough, and, he did seem to look directly at the shirt for a good second.  We exchanged “hellos”, and in I went.  Damn; I thought he might jump.  OK, I had my shopping list, and figured that I would take a sort of ‘hover/saunter’ approach. I would take my time making picks, in order to give others a chance to get a good look at the shirt.  I would consider the area to be conservative, and, it wouldn’t be out of line to find some people that got a chuckle out of the design.  Pork chops:  check.  Cherries and blueberries:  check.  USDA Prime tenderloin cuts:  you better believe that’s a check.  I was in my grocery element, trying to not be too obvious in flaunting my wardrobe choice.  As it turns out, I wasn’t too obvious.  At all.  Even when I picked up a Costco rotisserie chicken, the guys in the back barely took notice of me.  And, it was a glorious chicken, indeed. 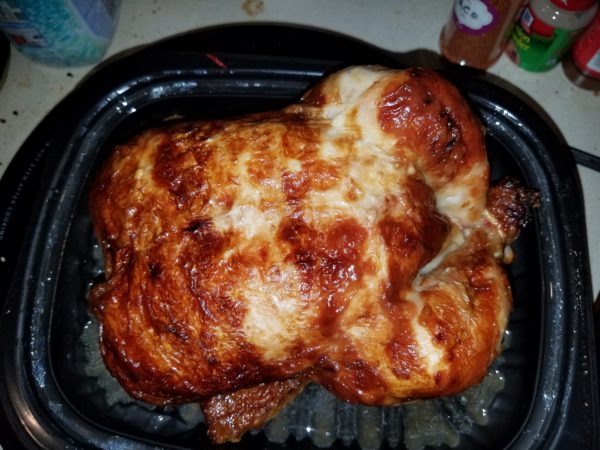 C’mon—the butcher/meat counter guys should be a prime demographic for a curious chuckle at the expense of The Hat and The Hair.  Really?  Did I need to wave them down?  Tom Thumb meat counter dudes were always talkative; maybe Costco thought their people didn’t need to go that route when it came to cutting up meat for their customers?  After what seemed like a Target amount of time wandering the store, I was ready to check out.  They had self-checkout lines, which was new to me.  Probably another poor choice on my part if I wanted human interaction, but I was curious to see if these were a good idea for Costco (they were/are).  I had also come to not expect much conversation from these employees, due to the need to keep the lines moving.  They had a screw-up fixer who hovered around the kiosks to watch for whatever evil might crop up in a Costco checkout line.  He did a quick sweep by me, with some kind of greeting.  I was actually concentrating on the process, as I didn’t bring my bags inside with me, and I was trying to calculate if I had enough room on the pressurized counter.  It was awkward unloading a cart, just to load it back up the same way, but I got through the ordeal unscathed.  On the way out, while passing the food court seating, I realized I was being stared at by a young guy who was aaalmost in the right league for the half-ugly blonde sitting next to him.

You eye-ballin’ me, son?  ‘Cause I’ll whoop you like Patton for a-

Oh, right; the t-shirt!  Actually, he was giving me a sort of half-sneer that could have either been aimed at me, or, the shirt.  Maybe both; I’m sure I presented some sort of challenge to his sexual primacy, wearing this funky fresh example of CPRM’s cleverness.  In hindsight, I really shouldn’t blame the guy.  Hell, if I had to do it over again, I would have let him know that he could get his own H&H swag at www.redbubble.com/people/cprm  It might actually make a man out of him.

And, that was that.  I was finished with my excursion and needed to get home so I could unpack.  It was pretty much a goose egg for me in this experiment.  I just needed to record my observations and thoughts on the day.  I arrived just before a shipment of some of the finest coffee around was delivered, which picked up my spirits immensely.  I think the postal delivery lady scanned the shirt, but I can’t be sure—she was already smiling when we exchanged pleasantries.  It was about this time that CPRM’s words crept up on me again: “wearing the shirts.”  Right!  I have a Gropin’ Joe t-shirt that the world hasn’t seen.  Damn…  Well, I’ll have to worry about that later.

Right now, I have a lunch date with a Costco rotisserie chicken.