Consider this something of an epilogue to my History of Bolt Guns series.

The shooting sports is a place where one man can have a big influence.  In the post-World War II sporting rifle market, few people can claim to have had as big an influence as Roy Weatherby.  His iconic guns and cartridges weren’t to everyone’s tastes, but they made a big mark on the American sporting gun scene. 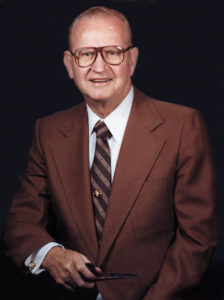 Born in Kansas in 1910, 1945 found the young Roy Weatherby in Huntingon Beach, California, fortunately before that state became a garbage- and feces-covered shithole.  He and his wife Camilla had a house there, and Roy had a business – a 25×70 foot closet that bore the name “Weatherby’s Sporting Goods.”

Weatherby was an incorrigible tinkerer.  It is not known if the late Charles Newton had any influence on the young Weatherby, but it would not be surprising if that was the case, because Weatherby’s first efforts were directed at the development of high-velocity centerfire rifle cartridges.  In 1945, the velocity race that Newton had started was about to shift into high gear; Roy Weatherby was positioned to take a commanding lead in that race.

In 1945, many gun writers like Elmer Keith were proponents of large-bore rifles firing heavy bullets at moderate velocities.  The .30-06 was already something of a standard in the game fields of North America.  A few people used the .300H&H, a real powerhouse for the time, and the .35 Whelen, using the .30-06 case necked up to .35 caliber, was a popular wildcat.

Around 1945, Roy Weatherby’s tinkering produced his first proprietary cartridge, the .220 Weatherby Rocket.  This was something of an “improved” .220 Swift, based on that case but blown out some to increase powder capacity.  Until this point the .220 Swift had been the velocity champion in bolt-action (and indeed, any) rifles, firing a 40-grain .22 slug at over 4,000 fps.  The Weatherby round improved on this some, managing to drive a 50-grain slug at the speeds achieved in the Swift with a bullet 20% lighter; but the Rocket wasn’t to be the pattern Weatherby would follow.

In that same year of 1945, Weatherby was looking to introduce his high-velocity ideas into the world of big game cartridges.  He hit upon the big belted .300 and .375 H&H cases as the idea starting point, as they had considerably greater powder capacity than the .30-06 family of cases.  To improve gas flow in the cartridge, he came up with a double-radius shoulder, something new that made forming the cases a little more complicated and therefore a little more expensive; but Weatherby rounds and rifles were never budget items. 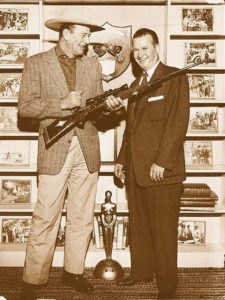 The .257 Weatherby Magnum was based on the .375 H&H cartridge shortened to 2.5 inches, blown out with the double-radius shoulder and necked down.  This round, rumored to have been Roy Weatherby’s personal favorite, can launch a 115-grain bullet at 3,400 fps.  That, folks, is smoking, even by today’s standards.

The .300 Weatherby Magnum is the most popular of Weatherby’s proprietary cartridges.  The big .300, until recently the most powerful .30 caliber commercial rifle cartridge made, was based on a blown-out .300 H&H case and launched a 180-grain pill at over 3,200 fps.

Weatherby was looking for velocity, and his new cartridges gave shooters that, in spades.  In marketing his cartridges and later, his rifles, Weatherby maintained that high-velocity cartridges gave more killing power than lower-velocity rounds firing bigger, heavier slugs.  In this he ran afoul of some of the older-school gun scribes like Elmer Keith, but Weatherby stuck to his guns, and gradually his cartridges gained a following.  Quite a few notable people endorsed Weatherby’s rifles, John Wayne among them; the resulting publicity sold more rifles and funded development of more high-velocity rounds.

In 1947 Weatherby came out with two more cartridges, again based on the H&H case:

In that same year Weatherby broke into the heavy rifle market, blowing out the .375 H&H case with the double-radius shoulder and naming this the .375 Weatherby Magnum.  In this round Weatherby actually missed the mark a bit; while the new heavy round would loft a 270-grain projectile at 2,800 fps, pretty respectable for a rifle intended for African plains game, its performance wasn’t enough greater than the time-tested .375 H&H to gain a lot of traction.  The Weatherby did have the advantage of being able to fire .375 H&H rounds in the rifle, thus fire-forming the case to Weatherby’s specs for use thereafter, making it in essence a “.375H&H Improved,” but this wasn’t to prove popular; that may well have led Roy Weatherby to his next step. 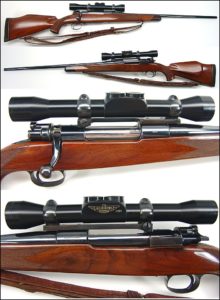 In 1955 Weatherby scaled up, with two new cartridges based on a new, larger case of Weatherby’s design.  As the basis of his new rounds, Weatherby basically took the .416 Rigby case, added a belt, and introduced two versions:  The .378 Weatherby Magnum and the .460 Weatherby Magnum.  The latter round was, at the time of its introduction, the most powerful commercial rifle cartridge in production.  Now, at last, Weatherby caught the attention of the safari market.  Within a few years, the big .460 was as popular among African safari guides and professional hunters as the old reliable .458 Winchester.

One other well-known dangerous game cartridge resulted from this, but it wasn’t a Weatherby product; in 1976 Colonel Arthur Alphin necked up the .460 case to produce his .500 A-Square.

In 1964, Weatherby introduced the only .22 caliber belted magnum at that time, the .224 Weatherby Magnum.  This foray into small bores finally displaced the .220 Swift as the velocity champion of the .22 calibers.  And finally, in 1968, Weatherby’s last magnum, the .240 Weatherby Magnum, set new speed records for commercial 6mm cartridges.

Still, cartridges are of little use without a rifle, and Weatherby’s rifles were as distinctive as his cartridges.

To be honest, I was never a fan of Weatherby’s style in bolt rifles.  The appearance of his first rifles was very distinctive.  Weatherby used beautiful wood and fine, high-polished bluing, but the stocks feathered a high Monte Carlo and a big cheekpiece, contrasting rosewood fore-end and pistol grip caps with white spacers, and white spacers on the butt pad.  Many people liked them, based on how they sold, but even back in the Seventies when I was coming up, I always found them a little garish.

But you can’t argue with success.  Shiny Weatherby rifles may have been, and on the expensive side to boot, but the combination of solid bolt actions and powerful, high-velocity cartridges was a seller.

Weatherby’s first rifles, the so-called “Southgate” rifles after Roy’s big new store in Southgate, California, were built on FN ’98 Mauser actions.  Most of the Southgate rifles were built for Weatherby calibers, but old Roy would turn out a fine rifle in a standard caliber as a custom item if a customer asked for one.  In 1956, Weatherby contracted with Schultz & Larsen to build rifles for the big new .378 and .460 Magnums on their beefy Model 54 bolt action, but that situation only lasted a couple of years, as Roy Weatherby’s crowning achievement was in the works. 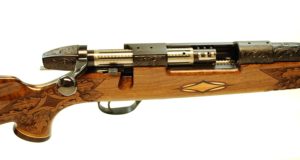 In 1958, Roy Weatherby’s ideal rifle finally took form with the introduction of the Mark V.  This was something unlike the Mauser 98 and Schultz & Larsen actions of previous Weatherby rifles; the Mark V had nine small locking lugs at the front of the big, hefty bolt.  When carefully fitted, as was generally the case with Weatherby rifles, this made for a very strong action.  The first Mark V actions were made by Pacific Founders, Inc and assembled at South Gate, but demand quickly outstripped Pacific’s capacity, so Weatherby moved production to Sauer, who was similarity unable to keep up, and then to Howa in Japan.

Mark V production muddled along unchanged from 1958 to 1963, the only notable difference being the relocation of the safety from the receiver to the bolt shroud when the manufacture moved from Pacific to Sauer.  But in 1964, Weatherby determined the need for a scaled down version to go with the new .224 Weatherby Magnum, and so the six-lug “Varmintmaster” was born.  The six-lug Varmintmaster was later offered in .22-250, the first production Weatherby in a non-Weatherby commercial caliber (the company would build a Mark V custom in almost any caliber) and later the full-size Mark V was offered in the immortal .30-06.

Some years later Weatherby would begin offering the Mark V in a variety of non-Weatherby calibers, but only in the six-lug versions.  This has added some collector’s value to the few nine-lug .30-06s out there.  If you have one, let me know; I’d happily give you a couple hundred bucks for it.

This new Weatherby had some significant things going for it.  The nine locking lugs were placed on a reduced bolt head, meaning there was no necessity for locking lug races in the action; this made the action very smooth in operation.  As the action was designed for high-pressure, high-velocity rounds, the bolt body had three holes to vent hot gases in the event of a case failure, and the oversize bolt shroud likewise shielded the shooter’s face from hot gas in such an event.  The later bolt-mounted safety was robust, locking the firing pin in place – although I maintain to this day that the only safety that one should rely on is the one between your ears.

The Mark V was a fine rifle if a bit showy, but it was also expensive.  So, in 1970, Weatherby made a deal with Howa to produce a rifle with the traditional Weatherby style using Howa’s Model 1500 action, chambered in standard, non-Weatherby calibers.  This became the Weatherby Vanguard, and with this rifle Weatherby took aim (hah) at the market held firmly by the Remington 700 and Winchester Model 70 rifles.

Weatherby didn’t neglect the rimfire market, either.  In 1964, Weatherby released the semi-auto Mark XXII, a slick, pretty rifle firing from a 10-round detachable magazine.  My oldest friend Dave had one for some time and enjoyed it, but it was an expensive proposition for killing squirrels, so he eventually traded it off; but I remember it as a real tack-driver.

Current Mark V barreled actions are built by ATEK of Brainerd, Minnesota, while the Vanguard continues to be manufactured by Howa in Japan.  The semi-auto Mk XXII, sadly, has gone out of production as of 1989, although currently Weatherby offers an Anschutz .22 bolt gun bearing the “Weatherby Mk XXII” label. 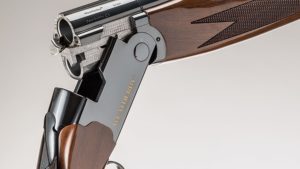 Roy Weatherby died in 1988 at age 77, having changed the American sporting rifle world forever.  Five years earlier he had passed leadership of Weatherby, Inc. to his son Ed Weatherby, who still runs the company today.  Last year the company announced it was finally leaving southern California for the more gun-friendly environs of Sheridan, Wyoming.  A portion of the Weatherby estate went to fund the Weatherby Foundation International, a non-profit organization dedicated to educating the non-hunting public of the benefits of ethical, scientifically managed sport hunting.

Most of Weatherby’s current rifles – and shotguns – are a tad more subdued, most of the current production bearing synthetic stocks.  These have many advantages on a hunting rifle, and indeed my hunting rifles tend to wear synthetic stocks, but I’m still pleased that Weatherby does continue to offer the Mark V and the Howa-actioned Vanguard, as well as the Orion shotguns, with fine walnut furniture as well.  The same applies for Weatherby’s current scattergun offerings, which include the very fine Orion over/under and the 181, Element and SA-08 semi-autos.

The pairing of a Weatherby rifle and an appropriate Weatherby cartridge will still serve as a fine rifle for the game fields anywhere on the planet.  John Browning or Sam Colt he wasn’t, but he broke some new ground in sporting rifles and founded a company that persists today.  That’s not a bad legacy; not bad at all.  And not too shabby for a guy who started building rifles in his garage.

Howdy, Glibs. I hope the fathers among you were properly respected by your spawn yesterday, and that no new discoveries…