Note:  A preview from my upcoming autobiography, Life’s Too Short to Smoke Cheap Cigars (Or to Drink Cheap Whiskey.) 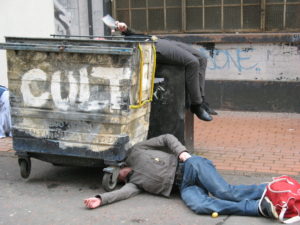 We used to call such folks “birdwatchers,” but now they watch all manner of wildlife.  In the stretch of mountains where I regularly spend days and long weekends loafing around, (I disguise my loafing by calling it ‘fishing’ or ‘elk hunting’) even the skunks are beginning to complain about the retinues of binocular-wielding humans that follow them around all day.

Not even urban wildlife is safe from the prying eyes of humans.  I recently saw a couple engaging in some wildlife watching in the urban environs of Denver:

“See, just to the left of that dumpster.  It’s a Bearded Wino.”

I quickly stepped in to correct the wildlife watching couple.  “You’ve got the older edition of Urban Wildlife of the Western United States,” I told them.  “You should check the new politically-sanitized edition.  What you have there is a Facial-Hair Enhanced Residentially Challenged Person.”

My own bird and wildlife watching began at an early age, at least in part because I was surrounded most of the time by various birds and critters; it was hard not to watch them.  In fact, sometimes the wildlife would watch you, which could get downright unnerving.

At the tender age of twelve, a youth spent mostly in the hardwood forests of Northeast Iowa had taught me about most of the local flora and fauna, including the ubiquitous Barred Owl. These birds were known locally as “hoot owls” after one of their calls, a characteristic series of deep hoots, boomed out in a ringing, “Who cooks for you – who cooks for you-ALL.”

I’m not sure why the locals chose that name, though, because no other bird alive today is capable of the cacophony of screeches, wails and howls as the Barred Owl of the upper Midwest. The very presence of this virtuoso of the nighttime woods was the source our terror that dark night, as it was on many other nights in the deep forest.

I don’t know what possesses young boys to wander around in the woods at night. A nighttime forest can be a rather friendly place at times. In winter, when the leafless trees allow the moonlight in to reflect off the snow, the light will be bright enough to cast sharp shadows against the snow. But, in the late summer, when the trees have grown thick canopies of leaves that block out all but glimpses of the stars and the moon is new, the woods can be so deeply pitch black that navigation gets hazardous.

It was on just such a pitch-black night that my cousin, childhood friend, fishing buddy and partner in various mischief Bill and I decided to take a short cut through the woods, up a steep hill and across a meadow belonging to the Girl Scouts of America. The reason we decided to take this hike was simple, we had been fishing on the lower reaches of Bear Creek and my parent’s house was a good three miles if we followed the road back, but only a mile if we cut over a ridgeline, across the Girl Scout camp land and through my parent’s woods down to the house. Simple, right? 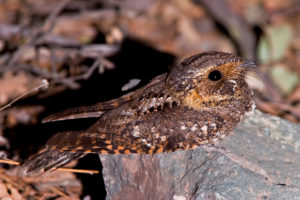 The hike started out great. In the relatively open ground of the creek bottom and the power line cut leading up to the Girl Scout land, starlight provided enough light even in the new moon. We couldn’t see much, but it was enough, and the friendly calls of whippoorwills accompanied us.

Not many people these days get to hear whippoorwills, their numbers have sadly diminished, due in large part to agricultural chemicals and habitat loss. In our youth they were legion, and the endless repetition of their namesake call rang through the woods at night all summer long. They called back and forth across the meadows on the hilltops, “whip-poor-will, whip-poor-will” and if you got close enough, you could hear the faint “chuck” at the end of each call. You might even catch a glimpse of the cigar-shaped body and rounded wings of the birds as it fluttered to a new calling spot.

Bill and I had a great time walking across the open ground leading up to my folk’s upper meadow, trying to locate each whippoorwill as it flushed. But that changed when we entered my parent’s woods, under the great overhanging oaks and hickories. The whippoorwills stayed out on the edges and didn’t venture far into the thick forest. In the tall trees our vision was useless as even the faint starlight was blocked out. The darkness was a tangible presence as we slipped silently through the forest night. Our eyesight was useless, but we knew danger was everywhere. Strange sounds echoed through the trees, eerie presences whisked by overhead, and small things scuttled past underfoot. A cold breeze rattled through the tree branches.

I was waving my hands out front, feeling my way from tree to tree. “Don’t worry about it, I know every tree in these woods.”

Bill wasn’t too comforted by my show of confidence. 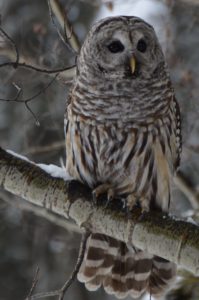 The silence of the forest was broken by a series of eight deep, booming hoots from the hillside above and behind us.

“No,” Bill replied, “But right now I’d rather you show me the way back down to your house.”

Three answering series of hoots sounded from varying directions. “Geez, Bill, I got three of ‘em answering! This will be great!” In the silent darkness, I somehow got the impression Bill was adopting a skeptical expression.

“See, they’re coming right in! Watch this, I’ll call them right in on top of us.”

“I don’t think I like this. Maybe you oughtta leave the owls alone.” Bill advised. Despising Bill’s sudden display of the better part of valor, I belted out another owl call.

“Maybe we better head on back now.” Bill whispered. An ominous presence seemed to be gathering around us.

Owls, you see, can fly in complete silence, due to soft downy edges on their flight feathers. This feature enables them to float softly up on an unsuspecting rabbit or mouse; it also enables them to drift in on what seems to be a strange, rival owl calling threateningly on the edge of their hunting range. They will do this even if the strange rival is really a twelve-year old boy.

As much as I can reconstruct from the awful moments that followed, three owls drifted in on silent wings, each expecting a rival, and each finding one – the other two owls, in fact, that I’d likewise tolled in with my patented owl call. The first owl to sense the others must have reacted in typical hoot-owl fashion.

One moment Bill and I were crouched silently under the giant oaks, listening carefully to a night where a few insects seemed to be the only other living things about. The next, a horrifying sound split the night wide; a cross between the wailing of a lost soul, and the enraged screech of a wildcat attacking to defend her young, cast forth at the decibel level of a train whistle. The other two owls responded in kind.

The scream of an enraged hoot owl facing an adversary would cause an axe murderer to cringe in terror. We were two twelve-year old boys with three of them sending horrifying challenges ringing back and forth in the trees above our heads. Only one course of action lay open to us.

“FOLLOW ME!” I shouted back, already shifting into high gear. “I KNOW EVERY TREE IN THESE…”

A rock-hard object hit me in the face, an explosion of light resolved slowly into a constellation of stars, wheeling slowly in front of my face. “Funny, I thought the trees were too thick to see the stars here, and why are they spinning?” Then I realized I was laying on my back. I’d run headlong into a white oak tree.

The shrieks of three maddened banshee owls rang through the night; faintly, I could hear the crashing of Bill’s fleeing tennis shoes. Then, WHACK! Bill charged into a shagbark hickory with enough force to drive bits of bark into his forehead.

I managed to get to my feet, terror of the horrible wailing driving me on. I’d gone perhaps ten feet when I clipped another tree trunk in the pitch dark and went spinning to the ground again. A few feet away, I heard Bill using language that would have caused his mother to run for a stout switch, as he proceeded to slam into tree trunk after tree trunk like a small, frightened ball in a giant, darkened pinball machine.

Somehow, slamming from tree to tree in the pitch dark, we managed to make it back down the creek bottom to my parent’s house. In the dim light shining from the porch, we splashed across the creek to collapse gasping in the front yard. The owls still screeched faintly in the background.

“Well,” I informed Bill, in between gasps, “I told you I knew where every tree was.”

I’m amazed to this day that Bill had the strength to attack me after our ordeal, but attack he did, and I fought him off at the cost of a black eye and two badly bruised fists.

In years following, I spent many a night in the woods, listening with great enjoyment to the wailing of hoot owls in their nocturnal battles, and I even called a few more in by mimicking their eight-hoot call. I exchanged a few conversations with owls perched in trees right overhead, their sudden challenges never frightened me again the way they did that first time. To this day, the call of a hoot owl fills me with nostalgia. Deep inside, though, somewhere down in the recesses of my psyche, there remains a twelve-year old boy who will always know a few moments of panic, recalling that night. I generally get over that moment of dread. Of course, I do have my confident knowledge of the northeast Iowa forests to my advantage.

After all, I know every tree in those woods.